With bad weather forecast for Robinson (G/LD-021) a change in plan was called for and according to the weather forecast it was supposed to be dry on Slightly Crag.
I usually (bribe?) my children to come along by offering a breakfast at a cafe before the start, but I failed on that one. The only place I could find that was open required guests to book a table and didn’t publish prices on the menu this seemed a bit upmarket of Greggs where a cup of coffee and a bacon roll come in quickly. I thought my version of smart casual required for a hillwalking might fall short of the dress code and as Woody didn’t arrive with kennel club membership he would probably be stuck outside… so we had a slightly late start after having some food at home. According to the map software it is 46 miles away - but that took 1hr 50 to drive - the roads are rather slow, or perhaps it is just the ageing driver…
We talked at “The Loan” 562785 meeting the resident who confirmed that it was OK to park. They don’t get many walkers…
The first part of the walk was easy along well marinated forest tracks. Most of the forest was felled recently so there were views. 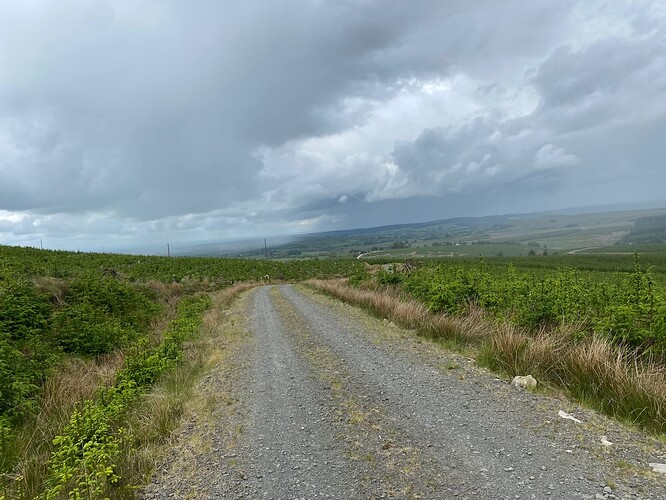 IMG_45941920×1440 358 KB
Once again storm Arwen had caused problems and there was a couple of places where a detour was required, so by the time we reached Twolads Crag at the edge of the wood, a mere 1200 horizontal m and 100m below the summit it seems that it would only take a short sprint and we would be there. The new barbed wire fence was the first challenge (there is an easy crossing at 590809 which we used for the return). We got the dog over safely but my legs suffered!. So now just the 1200m walk, which took nearly 45 mins, deep heather, bogs, rocks all adding to the enjoyment. 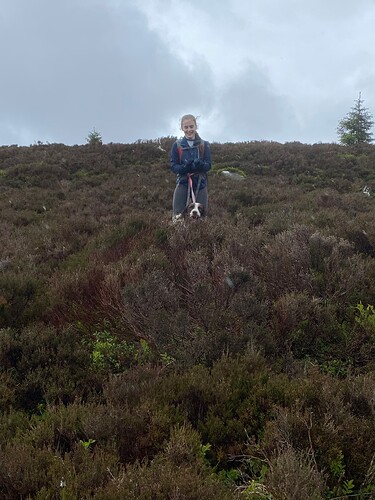 By the time we arrived at the trig point I just had the time to remind myself we were there because the weather was forecast to be better as it started raining heavily. 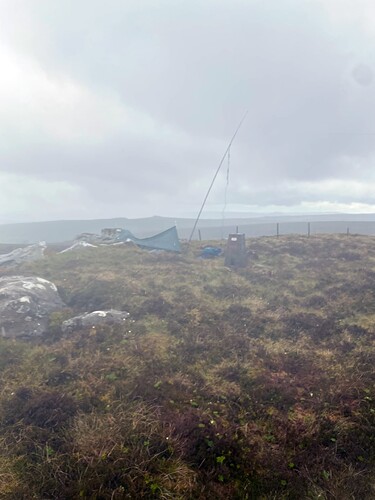 The trig point had been rebuilt in 1999 and was intact, with the remains of the old one nearby, indeed the end of the old one served as a base for the mast. A bit of faffing around with a tarp and we were dry… ish.

Stayed for about 45mins in heavy rain on the summit with contacts on 40, 20 and 2m (thanks again to the chasers) (KX2 and EFHW) which was followed by a slightly easier downhill walk across the bog and hillside. Woody is attached and is as usual expedition leader trying to get anywhere at twice human speed… 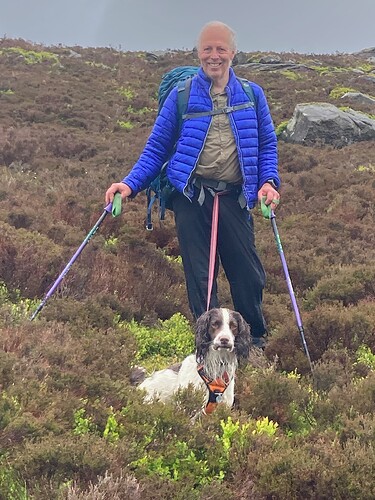 On getting back to the car a large slice of Chocolate Cake from Katies work and coffee - brewed in the Jetboil with the cafetière filter hit the spot.

So…I’ve activated the not quite least activated English Summit that is still current, I think Swinside on private land near Keswick with just 31 activations beats it, but at just 37 still fairly rare and it isn’t on my repeat list. I might be waiting a bit to turn it into a complete…

… so I notice from my private challenges I seem to have somewhat changed the plan, and I now only have one summit left to activate in G/SB… so that will be my first area completed! 50 completes is also getting very close and Red Screes and Robinson should get my next target and the half goat is just three more points after that!

Finally my forthcoming retirement will see me handing quite a lot of Windows computers back to the office, and after spending the best part of 20 years working or fighting with Windows it seemed like a time for change so I have gone Mac and have switched logging from Log4OM to MacLoggerDX. I still have some learning to do, and uploading photos the right way round is a challenge but so far so good!

Apologies to Mark (G0NOM) for the title but I did my usual and took the kitchen sink… 1.5l of water most of which got carried both ways, the shelter (very useful) spare jacket (not needed) EFHW transformer - which is too heavy and would probably take 100w, KX2, spare battery, FT270 and a J pole as well as the rubber duck and of course a small sachet of cat food to bribe the dog… so heavy on the crag - and that is without taking into account the waistline.

Thanks again for all the chasers, and apologies for the short activation it was tipping down!

It’s taken me 16 years to get this stage however with just 1 to complete the region. Oh, and it’s Sighty Crag

So now just the 1200m walk, which took nearly 45 mins, deep heather, bogs, rocks all adding to the enjoyment.

I remember it. I cycled the approach along the forest roads (which worked well). Walking up the fire break was fine, but that final slog! You obviously didn’t pre-brief your daughter on Sighty Crag’s reputation. Well done though, you can now add it to the list of conquered fells that don’t need a return visit. Although not in the same league, I think Swinside is also on that list for me (mainly for being quite boring and a bit of effort to get the permission).

Hope you enjoy your forthcoming retirement. I love it, though I do miss the opportunity to grab the odd far-flung SOTA peak during work trips around the British Isles.

Hi Paul,
Nice report and an interesting summit. You will probably have seen Jim’s excellent website if you’re going through the SB’s but for others that haven’t: Summits on the Air: G/SB-005

For me, the poem really says it all. That SOTA was special but special in what way I could never really put my finger on. It was a hard day that I won’t forget, especially the many holes in the ground. That one after Peel in the morning was more than enough for me and I ripped off my exhaust too. You seemed to take it all in your stride so well done all three of you!

Don’t think I’ll ever see that trig again either.
73, John

Here is my video.

Now for some remote places in the same area. In some ways they were easier to get to than Slightly Cragg.

BTW don’t expect too much of my videos.

Thanks again for all the chasers

My pleasure, Paul and thanks for the S2S. I was on Grasberg, that Ben, GW4BML had activated the day before. I guess, you have noticed it in the qso.

Maybe it’s the selective memory effect since I did it back in August 2011 but I don’t recall Sighty Crag being too bad at all! My enduring memory is turning up at the starting point and finding the gate locked and a big sign prohibiting access due to ongoing construction works. All was quiet with no sign of any activity so I rang the contact number on the sign and explained to the pleasant lady who answered what I wanted to do. She agreed to find out whether I could have access, and bless her two hours later she called me back and confirmed that there were no active works there today and it would be OK for me to enter. Result! I guess after that the physical challenges paled into insignificance!

I activated this one way back in 2007… can’t say I’ve ever been tempted back there.

That final 1.2km is indeed the killer. I think the easy forestry tracks lull you into a sense of false security. When I did it the forest was still extant and it was a relief to get out onto the open hillside, the feeling soon to be dashed by the yomp across the heather and rocks. I’m sure the undulating route added 50m of vertical height!

So…I’ve activated the not quite least activated English Summit that is still current, I think Swinside on private land near Keswick with just 31 activations beats it, but at just 37 still fairly rare and it isn’t on my repeat list. I might be waiting a bit to turn it into a complete…

Hensbarrow Downs G/DC-008 is the least activated in England, currently standing at 23 activations. Mine was the 18th.

But it is also a very odd summit being man made from the waste of China clay mining. I seem to recall the summit replaces an earlier one, G/DC-004 which was on the original summit where the trig point is now. I guess it might be argued the number of activations of 004 should be added to those of 008 to get a fairer comparison but I can’t find how many there were.

… it might be argued the number of activations of 004 should be added to those of 008 to get a fairer comparison but I can’t find how many there were.

On the database main page , select Menu, then Summits, then Find Summit. Just put in Hensbarrow and you’ll get links for both DC-004 and DC-008. As far as I know, the database retains information on all deleted summits…

Gerald, thank you, I did look at the page for 004 but didn’t see the number of activations. I was using my phone at the time and now I’ve tried it with a larger screen I see there were 50 activations, the last being in September 2020. So I think G/DC-008 is only the least activated G summit on a technicality!