I’m aware that the following activation report is not for everyone’s taste, simply because the pictures seem to be too boring. At least in our modern life that is (or has to be) shiny, bright and colourful. Nevertheless, I hope that one or another will enjoy them, though.

Retrospectively, the whole story is based on a couple of initially unrelated occurrences:

A couple of weeks ago, a young friend told me that he is now very proud of owning a book published in '2015.
?!Hmmhmmhmh?! Very strange, a young avid climber, for whom it would be the most severe punishment if he must stay at home and must not go out to the mountains, is proud of owning a book.
Additionally he spoke about a real book, i.e. a book printed on real paper. And I absolutely believed that his generation would put down paper-printed books as ancient relicts that just get dusty on the bookshelf, because they are full of disadvantages compared to the modern E-book technology.
Last but not least, what literary value would have a book that has been recently published in 2015?
Finally I got the picture, when he handed his book over to me. His new book was a kind of a re-make of a, in older days, popular guidebook for alpinists, dating back to the year 1970. In this book 100 challenging climbing routes throughout the Alps had been documented with interesting reports of the climbers and with impressive black & white photographs of huge alpine walls. While in his new edition of the book all of the climber’s reports have been replaced with contemporary descriptions, the photographs have been taken over as they were, i.e. black & white pictures dating back to the 1960 and 1970’s. And those 50 year old nostalgic photos still radiated such a strong fascination, unbelievable.

Completely unrelated to the book, during the last couple of SOTA activations I visited quite unpopular summits in the nearby mountains.
The first ascent of those summits date back to the mid of the 18nth century, all of them somewhere between 1850 and 1870. Despite of being located, more or less, in the center of Western Europe they are all very unpopular. Since the route up to the top is rarely marked and part of the path need sure-footedness because of exposed sections.
Nevertheless, due to their height, all of the them exceeding 2200m, they are exhibiting a great panorama. At the other side the log-books that can be found on those summits date back to 1970, where the log-book is not even half-fulled with entries from visitors. Walking on such old paths conveys really a nostalgic feeling.

Finally, on my latest SOTA activation the views were, due to the weather conditions, all in all very hazy, dull and boring and I was absolutely reluctant of taking colour photos. Out of this little frustration I came to the idea, why not to try out taking some black & white photos that would fit quite nicely to this nostalgic hiking tour.

On my way up to the Schaufelspitze, OE/TI-996, it became apparent that the weather would not be as brilliant as the days before. The sky was completely covered with clouds preventing the sun to shine through. About halfway up to the summit I took this first picture from nearby mountains: 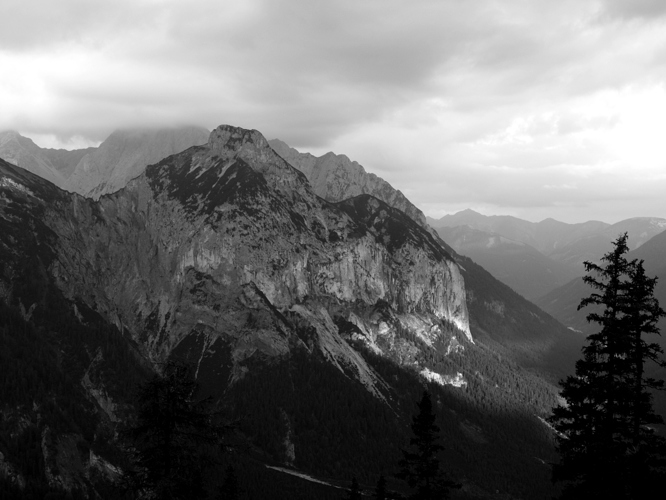 After about 2 hours hiking, where about 900 heigh meters through pathless terrain had to be crossed, the first view of today’s destination appeared.
First the secondary summit at the left side has to be climbed up, afterwards a ridge to the main summit on the right side must be traversed: 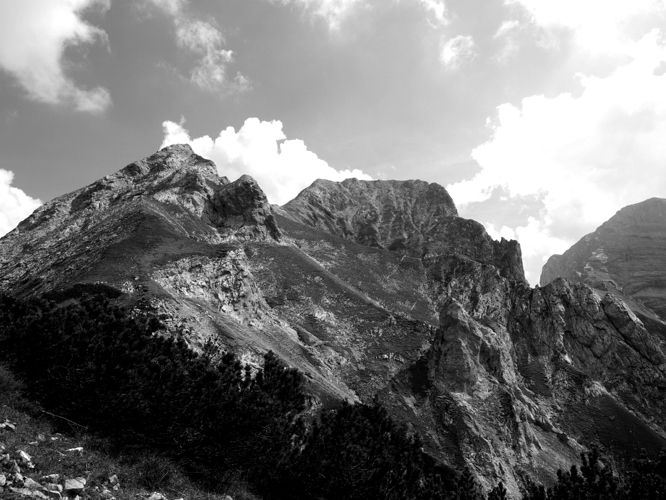 Here is a view already from the top of the summit down to the now sun-lit ridge that had to be traversed: 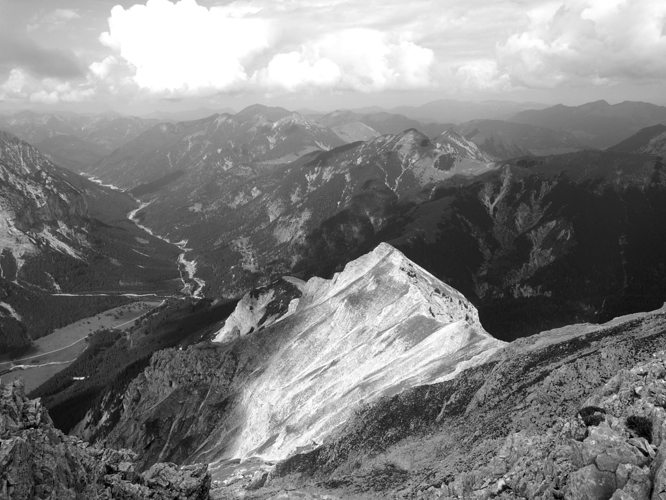 Interesting rock formations appeared during the tour, like this gendarme, that either has to be climbed over or passed-by across the steep edge: 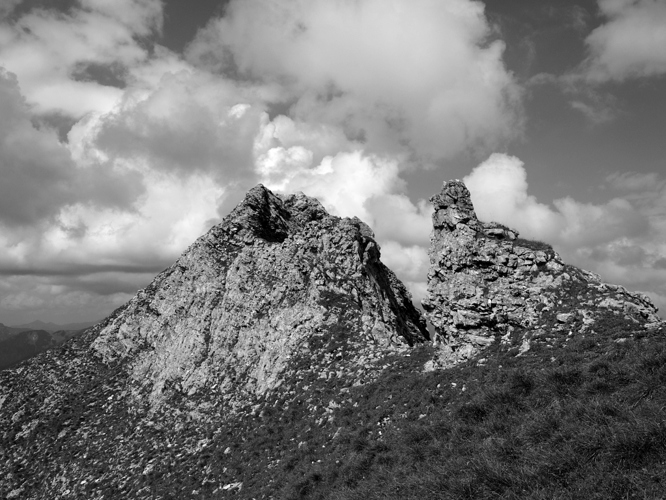 Unexpectedly, during my descent another hiker crossed my path and helped me to set the dimensions of this mountain into the right perspective.
Here the hiker is standing in front of the final ascent, studying where to find the climbable route: 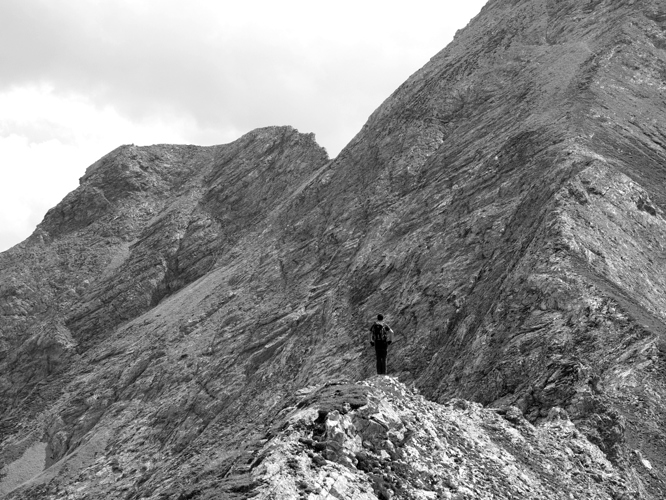 After 3 hours I finally reached the summit cross of the Schaufelspitze: 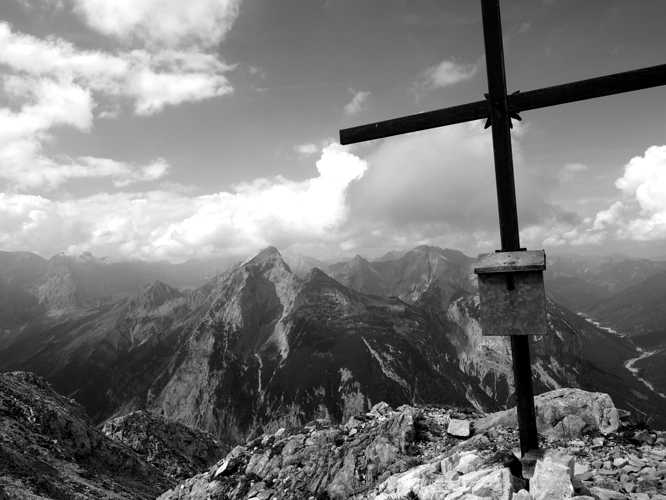 A nice panorama opened up in front of my eyes. Here the valley where I came up is shown. 1300 height meters in tangible proximity: 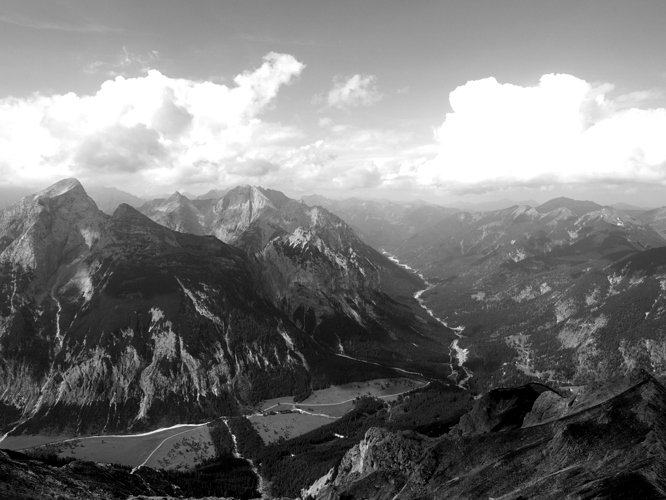 At the other side the impressive north face of another SOTA summit appears: 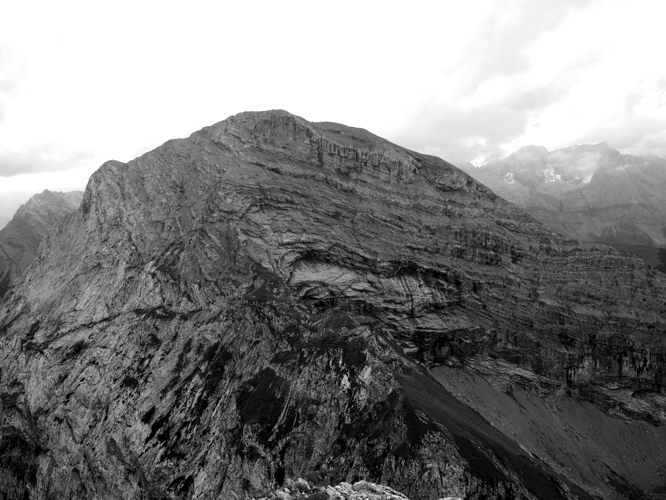 The east face of the same SOTA summit with it’s 800 height meters. It is the summit Sonnjoch, OE/TI-615, that can be climbed up comparatively easy from the south-west side: 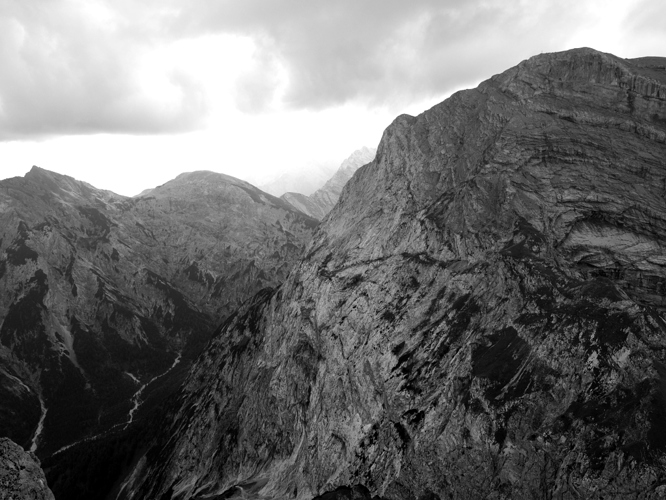 Here is the profile of another nearby mountain that unfortunately does not fulfill the prominence rule for becoming a SOTA summit: 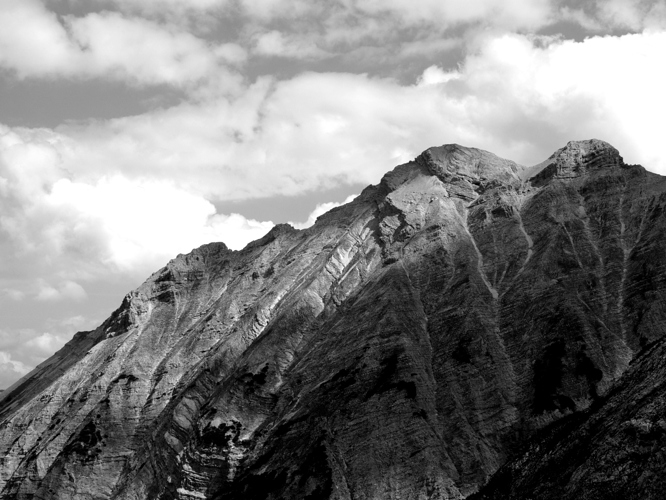 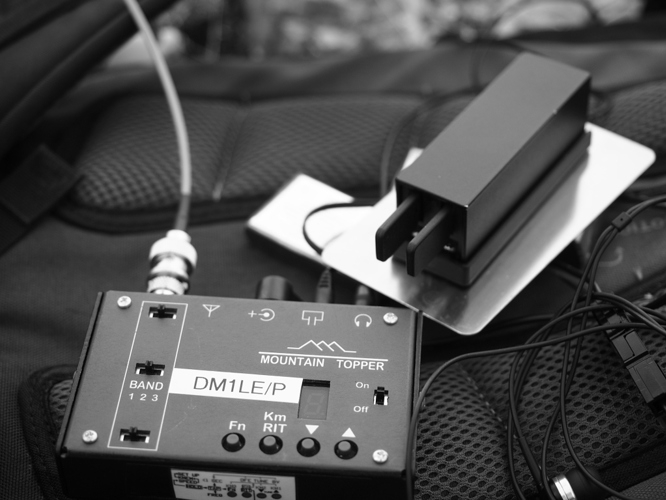 With just 15 contacts on the 20m and 30m bands the number of contacts was rather low, as expected for the current propagation conditions. Fortunately I had a long wire with me that tuned to the 40m band and that helped me to bring another 21 contacts with just abt. 3watts output power into my log. So all in all a very pleasant activation.

I would like to thank all chasers for calling me and for spotting me on SOTAwatch.

And I hope that this report wasn’t too boring. I guess the next report will be shiny, bright and colorful again. At least if the weather is appropriate

Stephan,
Thank you for your interesting report of this rarely visited summit and the brilliant fotos. They remind me of the old-time mountain fotos of Ansel Adams.
Did you use an original old-time camera with silver-based film or did you switch your digital camera to B/W mode? (I wonder if it is still possible to buy and develope these films?) Still, the contrast-range and fine details in your fotos are just amazing!
73, Martin DF3MC

A great report, Stephan, and superb photos, but oh heavens, how old you have made me feel! I read your report then I reached across to my bookshelves and grabbed a guide book at random - Bernina Alps, West Col Publications, published and bought in 1968! I have shelves of old climbing guide books, I will never bring myself to get rid of them, although now I am too old to climb I still get one out occasionally and read through it to re-live old glories as the feel of the pages bring to mind sun-baked rock and heart-in-mouth struggles with Sir Isaac - yet here you are talking of books of my vintage almost as if they were printed in the Middle Ages! I know the book you were referring to, I didn’t know it had been re-issued but in its day it fed dreams of the mountains to sustain climbers trapped in the city and earning the cash for the next escape.

They remind me of the old-time mountain fotos of Ansel Adams.

Yes, he was really a great photographer, and no doubt he inspired many others to take black & white pictures.

Did you use an original old-time camera with silver-based film or did you switch your digital camera to B/W mode?

I didn’t plan in advance to take black & white photos, so I just switched my digital camera to B/W mode.

I wonder if it is still possible to buy and develope these films?

At least Ilford is still offering a complete assortment of B&W films and photographic papers for the typical sizes.

I remember at least twice the last two or three years that I met photographers on summits who were still taking photos with analog middle format cameras.

but oh heavens, how old you have made me feel

Sorry, that really wasn’t intended. Instead my intention was to just have a short break in our modern, hasty world and look back in time, may be just a few decades, and imagine the fascination of mountaineering in those days.

I have shelves of old climbing guide books, I will never bring myself to get rid of them

I can only imagine the treasures of alpine literature in your library and envy you.

yet here you are talking of books of my vintage almost as if they were printed in the Middle Ages! I know the book you were referring to, I didn’t know it had been re-issued but in its day it fed dreams of the mountains to sustain climbers

No indignity intended. I was also surprised that the classical Pause/Winkler got a remake. But I think it’s a good way to awake the interest of younger generations in the classical alpine literature.

No apology needed, Stephan, I understand your meaning - and we who love the mountains for their own sake share a treasure beyond price!

Good Morning Stephan
Your article with the B/White photo’s brought back many memories, stunning photo’s well done, for me black & white are the best, I was very much a mono photographer in the 70/8Os +, but then digital came along.
I still have Nikon 35mm film camera’s & film for them, in fact I still have a full black & white darkroom, stored in the attic of the house, all that would be required are the chemicals & paper to set up again.

I have heard that film is making a comeback, but I doubt this very much because the vast majority of the public use mobile phones for taking photo’s these days.
There is still a few photographic processing establishments around in the UK.
And yes Ansel Adams one of the great photographers.