Well, they are not all in Shropshire, but there are 5 summits in a relatively small area which attract 2 points, plus a winter bonus. Corndon GW/MW-013, Stiperstones G/WB-003, Longmynd G/WB-005, Brown Clee G/WB-002 and Titterstone Clee G/WB-004.
These have all been activated in one day before by others, but not by me. Until today!

To keep it simple, I decided to use 145MHz FM, with HF as a fall-back option.
Corndon first up, and first in the Log was Rod M0JLA, who also spotted me, thank you, and also for the subsequent ones. Seven contacts followed during a twenty minute stint. I was using my Wouxun handy, and a ladder line J pole antenna. I got the feeling that something was intermittent, but all contacts completed OK.

Over to Stiperstones, where I opted for the FT817, feeding the same antenna. This time, with benefit of an SWR indicator, it became clear that a connection inside the BNC plug was failing. No obvious mechanical damage, but had to be held steady to maintain a connection.
I also found that the 817 had reverted to a strange channel spacing which precluded use of 145.500, so a bit of faffing to set that correctly again. It has done that before, though other settings seem stable…
Again Rod was first in the log, quickly followed by four more stations. A few un-answered CQs, and off to the Longmynd.

Here I tried the FT817 again, but the connector was even more temperamental. The new LiFePo battery was behaving itself, though, which was pleasing if only to be expected.
First in log this time was Neil, MW0ECX/P on GW/SW-005 for a welcome S2S, the only one for me today.
Neil was quickly followed by Rob G7LAS and Rod M0JLA. A total of fifteen stations worked, in about thirty minutes.

The weather forecast had not been too good for the afternoon, but it was looking stable, so off to Brown Clee. A bit of map reading involved, as the shortest route is not overly simple.
This time I opted for the Wouxun and its rubber duck, as this should allow minimum setup time, and avoid the dodgy BNC. The Wouxun was not troubled by the nearby commercial radio installation, and I made six contacts in 20 minutes. Steve M6ZZQ was first in, followed by Jez M0NTC/M and Rod M0JLA. A bit of a lull after the third, and John G7VIE kindly stepped up to the plate when I asked politely for a quick report from anyone listening on 145.500. I don’t think John is a regular chaser, but it is worth asking, if you are struggling for contacts.

So far, all of the summits had been wreathed in damp low cloud, but now a watery sun started to break through, and the surrounding country showed itself. Onwards to Titterstone Clee, with a bit more road map reading.

For once, the wind on this hill was not strong enough to push me around, though still noticeably stronger than any of the others today. Perhaps it is stirred up by the radar

The Wouxun and rubber duck came out again, and Rod M0JLA was first up, and, I think, the only station to catch me on all five. G1BLJ/M followed, and then Dave, G4PGJ. Dave offered to listen for me on 4m (I have the dual band Wouxun) and I agreed to call on 70.450 once I had worked all callers on 145.
Duncan M0OTG called me, having heard that I needed one more contact. Again, not a regular chaser, but much appreciated.
I made two unanswered CQ calls, and then the battery died. So, I was unable to try the 4m experiment, or to explain why - sorry Dave. The Wouxun has no provision for using an external supply, and I have no spare battery.
For a moment, I contemplated pulling out the FT817, and holding the BNC again, but the sun was low, and I was getting cold and tired, so I called it a day.

Many thanks to all who called me, and apologies to anyone who I missed.

73
Adrian
G4AZS
PS did I mention the mud

Nice once Adrian.
I did 3/5 - 145Mhz FM too last year and wanted to try the 5/5 this winter.
Which way did you go up to Brown Clee?
I am not sure I went up the most direct way last time I did it.

I approached Brown Clee from the west, parking at grid ref 585869, and following the track up. I think that is the quickest way.

The other route that I have used is from the north, following the concrete vehicle access road - but that is a longer walk, and quite a slog.

Well done Adrian, shame I only managed to catch you from Long Mynd, but I was having a busy day unfortunately & couldn’t be in the shack for your other summits, thanks for the points & hope to catch you again.

Well done Adrian. Me and @G0POT activated these 5 summits in a day last year, so I understand the pressure to complete before sunset

Funnily enough we’ve been talking today about doing the “Favourite Five” again in February and I was thinking 2m FM would be good, they all have a great takeoff and i’m sure we could carry up a colinear as the walks are modest… Ideas!

Well Done Adrian.
I’d love to do it that way round, but driving from Long Mynd down The Burway to Church Stretton puts the fear of god into me! In the winter it’s usually icy too

It’s not so bad going up but even that scares the pants off me!

Sorry didn’t get to work you on any of them, didn’t have a HT with me at work yesterday. I can work Stipperstones and Corndon from the office doorway with a HT (if we have a radio with us).

I really need to put a antenna on the office roof and keep a cheep HT in the office.

ps. good to see you at the RAYNET AGM Saturday.

PS did I mention the mud

Good grief… You could have warned me!
I only did Stiperstones today (G/WB-003), managed to go all the way up, and 90% of the way back down before loosing my footing on a patch of mud… Must have slid 10 feet or so, falling on my right leg, and I waited for the ‘snap’, which thankfully didn’t happen! (All I could think of was “Why today, when the Junior doctors are on strike??”

) Mud soaked waterproof overtrousers are now in the wash! I think the boots will have to go in the sink later! Thanks to everyone who called in, and apologies about the antenna falling down, I hope Mick M0MDA got his report as the antenna was lying on the ground at the time (Much to the amusement of 2 passing walkers!) And thanks to the people keeping the frequency whilst I put it back up again

Temp was around 3C with intermittent snow/sleet/rain, and very windy! View of Corndon Hill from the top Thanks Adrian.
I went up from the East side last time but was not a clear path. I will try the west route next time.
I hope to give them a go when the weather ease up a bit one of the coming weekends.

Having done this hill numerous times, from multiple directions.

I can say that the quickest and easiest way is to park at the phone box near the point on the map labelled “Bank House” and head up the Shropshire Way to the the South East! 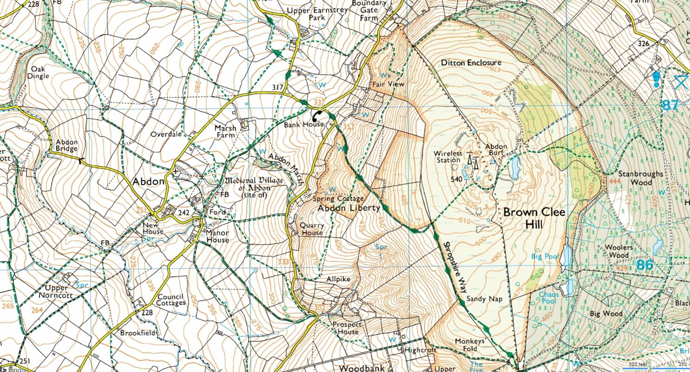 Hi Matt, thanks for the map and directions. Now I just need a spell of good WX on a weekend - and de-icer for the drive down to Church Stretton!
73 de Angel