So this is a shameless plug to try to drum up a bit of chaser activity and also get some opinions on which band is best to use.

I’m planning a short SOTA trip to the South Pennines region early next week with the intention of activating several summits.

The entire trip is fairly weather dependant & the exact schedule is yet to be decided (with most of the decisions being made at the very last minute).

I’m planning on going between Monday & Wednesday, with a view to activating 5 summits (Kinder Scout, Black Hill, Shining Tor, Gun & The Cloud are the current summits in my shortlist that are destined to be activated).

Up until now I’ve activated most summits on 2m, with the occasional jolly using a 20m vertical to see what DX I can pull in. This occasionally results in a struggle to get the required 4 contacts.

This time I will have very little time on the summit. Probably 15-20 minutes on each summit maximum. I want to be sure of qualifying the summits easily & quickly, so this time I plan to take 2m (probably hand held only for any S2S which might pop up) and put together a basic dipole for either 80m, 40m or 60m (not sure which band to use though). What band do you you folks that activate more often than me think I should go for?

Basically I want to get to the summit, smash my way through any pile ups that develop (generating a pile up on each summit would be nice if I can achieve it) but as an absolute minimum get the required 4 contacts and get on to the next summit as quickly as possible. I don’t really want to be messing about switching between multiple bands. I want to get through as many summits as possible in the shortest space of time (obviously without killing myself or the dog), as three days isn’t long…

60m is significantly quieter without much of the silliness that you get on 40m or 80m, and is routinely used to good effect by several activators. Looking at the MUF charts, it does seem that this band might struggle at certain times of the day though. This makes me nervous about relying on this band when I’m very short of time.

40m seems to pull in a lot of European stations when I listen to other activations. On the other hand it can get very busy and often gets a little silly. It’s not unusual to hear QRO stations setting up on an adjacent channel & wiping out the QRP station, and people shouting over the top of each other (but it may mean that I will most likely get the contacts quickly & easily). It is also the smallest antenna (easiest to set up & takes up the least space on the summit)

80m seems to be a little more civilised but again can get crowded at certain times of the day. Unfortunately the antenna is also longer, taking up more space on the summit.

I’m swaying towards cutting the dipole for 80m but wanted to see what others think. I could be swayed towards 60m or possibly even 40m.

Obviously if I had the time I would work all bands.

I don’t manage lots of activations but 80 has been a bit disappointing on the last couple - not sure if it isn’t the longer daylight affecting propogation. ( Why not put a link in and go for 60 or 80 - at least you would not be stuck! )
Paul

Why not forget the HF (you haven’t got time for fiddling with this) just take a 2m dipole, preferably about 1.5 to 2m above the ground with good long guys and coax (my previous coax was a bit short and I sometimes almost had to stand on tiptoe), make sure you are alerted and, if possible, spot on arrival and you should get more chasers than you need. Preferably start with the higher (and thus more valuable to chasers) summits and go on to any lower and thus potentially more difficult and you will find you have a following and, if you are really pressed, the same 4 or so will help you qualify each summit. They will be urging you on and clamouring to help you. Good luck!

Obviously if I had the time I would work all bands.
Thoughts?

Black Hill is a dreadful summit, poor VHF site, done it twice, there won’t be a third time.

The rest are SOTA classics. Gun and Cloud don’t come much easier to climb and qualify.

I’ve not done Kinder for a few years, however, you should have a pile-up on both VHF and HF.

Speaking from personal experience, Shining Tor stands head and shoulders above all of the summits you have selected. I’ve probably made around half of all the 21800 contacts logged from it. Excellent take-off on both VHF and HF. Take a colinear up there and you can log 100 VHF contacts any day of the week… There’s probably been more DXCC’s worked from it than any other SOTA summit.

Have fun in the South Pennines.

Black Hill is a dreadful summit, poor VHF site, done it twice, there won’t be a third time

This time I will have very little time on the summit. Probably 15-20 minutes on each summit maximum. I want to be sure of qualifying the summits easily & quickly, so this time I plan to take 2m (probably hand held only for any S2S which might pop up) and put together a basic dipole for either 80m, 40m or 60m (not sure which band to use though). What band do you you folks that activate more often than me think I should go for?

If you erect an antenna on HF you will be there for 40 mins to an hour unless you leave the pile up wanting and switch off. If you just take 2m with a decent antenna and a handheld you could reduce that to around 20 minutes. So as the quote says if you do want to spend 15-20 minutes on the summit maximum you should only operate on 2m, otherwise you won’t get your 5 a day.

As Gerald said Black Hill is not that bad for getting out a signal on 2m FM with 5 watts. Loads of us have qualified there using 5 watts from an heldheld with an externally mounted full sized omni directional vertical.

Black Hill is a dreadful summit, poor VHF site, done it twice, there won’t be a third time.

Unfortunately, that’s what I’ve noticed. VHF was always my preferred band for SOTA. Equipment is smaller & lighter than the HF kit & quicker to set up. Unfortunately there seem to be fewer & fewer people using it these days.

I’ve qualified virtually all of the summits in the SE region a few years ago on VHF alone.

I re-visited Walbury hill earlier this year and didn’t get one contact on VHF, even with a reasonable size mast and a colinear. I created a mini pile-up on 20m though, so still qualified.

I struggled to qualify Pen-Y-Fan in Wales on VHF recently. I know that my signal was definitely getting out as I had one contact near London (approximately 140 miles as the crow flies), so not sure why I struggled to get the contacts. I can only assume that there weren’t many people on VHF at the time (to be fair it was around 10am mid-week so a lot of people would have been at work).

I failed spectacularly on Kinder Scout a few years ago when I tried to do it on VHF.

Hence why I want to take some HF kit with me this time.

I failed spectacularly on Kinder Scout a few years ago when I tried to do it on VHF.

Plateau effect will attenuate your signal massively if you try from the true high spot without a significant mast. As it does on Black Hill if you don’t take suitable action.

So bad a VHF site that it was selected as the site for the first VHF TV and VHF FM radio transmitter for the North of England. In fact it’s such a bad site that for a long time the VHF TV could be received in Southern Ireland. Even today, VHF FM from there has the largest good reception area of all the UK broadcast sites.

The coverage was so much greater than expected on VHF TV that when the switch to UHF was planned in the late 60s, separate sites were selected much at much lower elevations to minimise the extensive coverage.

Barely worth the trip…

VHF was always my preferred band for SOTA.

If 2m is your preferred band James, then I would say go with it. I see that you run a VX8E and a whip on a small pole. If you can improve on that, then you would give yourself a better chance of making contacts.

Since starting in SOTA in 2006, I have nearly always run 20 watts to a 5 element yagi (6 or 8el on 70cm) at around 4m agl, primarily on SSB which is my preferred VHF mode. I achieved Goat on 2m / 70cm and I believe that this is still possible now. However, I do have to use FM more frequently due to the dwindling activity on SSB out of contest periods - despite what some may argue.

My heart bleeds for you Mike!

All you need for all the aforementioned summits, is a 2m handheld & rubber duck.

You might need to be patient on Black Hill - it could take as long as ten minutes to gather your four contacts. As for the others you mention, it shouldn’t take any longer than two minutes to qualify each - depending on the RCF (rag chew factor) at either end of the QSO.

My only advice is to have in-car charging for your handie to top it up between activations.

That sounds like a good 2m fm activation Mickey, I don’t underatand why you are moaning that 72 2m fm QSOs from Black Hill G/SP-002, that is high number of QSOs as far as I am concerned.

it could take as long as ten minutes to gather your four contacts.

If you stand in the wrong place that is.

The wrong place being the actual summit - as you pointed out.

One can only wonder why anyone would need to use FT8 on any of them…ROTFL.

The Black Hill summit is essentially a flat bog about 0.75km^2 (185acres) so you need to get to the edge or have a tall mast to get the antenna out of the interference of your own ground reflections. You can go many wavelengths high or stand on the edge of the flat bit. The broadcast mast on 100MHz (3m) gets the antennas approx. 200-230m AGL or 66 wavelengths. Is that in free space? Probably. Difficult for us to do so the edge is the place to be.

You can see the huge flat top on this map. You need to get away to where the ground slopes away to benefit. The problem is the summit is a horrific bog (unless frozen) as soon as you leave the flagged path you get mucky if not stuck,. Going North on the path overlooking Issue Edge or Issue Cleuch would be good giving a good take off N to ENE which covers Leeds and beyond. South West is not so good as the slope is much less but will still be better than the summit. On the West Heyden Head where the ground drops rapidly overlooking the broadcast site would be good but it’s probably challenging to get there without sinking in the gloop. So there are 2 places where operation should give much better results than the trig on 2m. Especially if you want to use a handy and rubber duck etc. 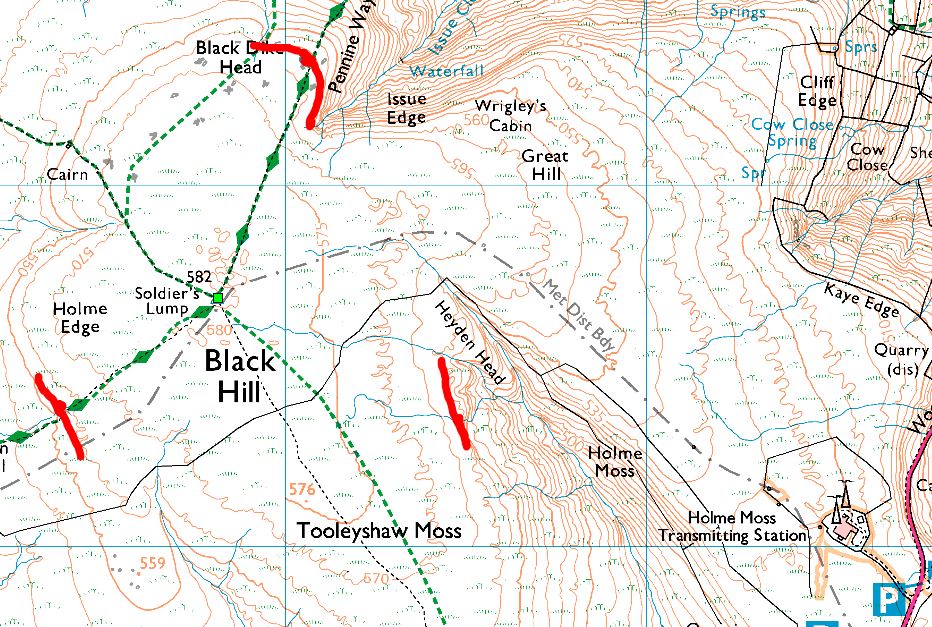 Kinder Scout is the same, keep away from the true high spot and operate near the edge.