As the weather (and my health) seem to be improving, I’m just on my way to the Bayerische Wald for a week of SOTA. You can follow me on APRS at:
OE6FEG-9.
73 Matt.

The Schwarzriegel [DM/BM-368] was very pleasant this morning, and a new unique for me. Unfortunately, the viewing platform that was once part if the NATO listening station is closed for the foreseeable future: 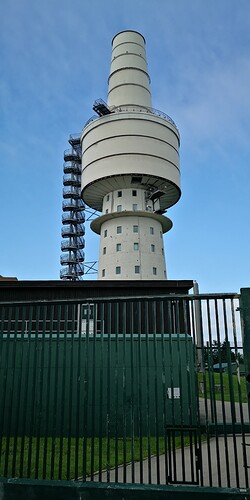 Previous activators have successfully used the platform to put up an antenna. Fortunately, there was a nice picnic table with plenty of room for my 60m Windom and a great view: 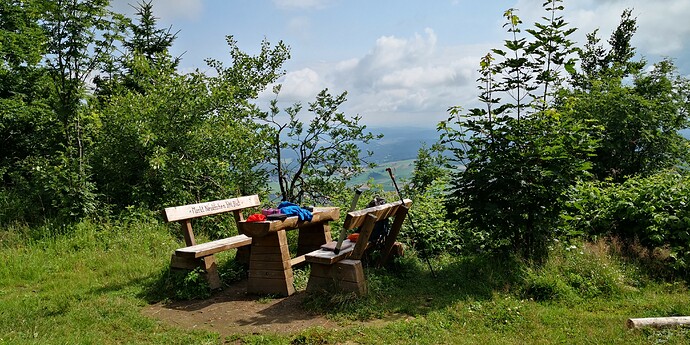 The Großer Osser [DM/BM-028] was much the same as it was last time I was in these parts, just hotter in the strong sunlight. Just as I got back to the car it started to rain. Fortunately, it was just a shower and I was able to squeeze in the Großer Arber [DM/BM-047] before the next shower began. The forecast for tomorrow has improved, so fingers crossed for another busy day.
73 de DL/OE6FEG/P
Matt

Thanks Matt for the twice summits QSO
73 Roger

Thank you for the report. That’s an area of Germany I don’t know. When I lived in Germany in the 70’s it wasn’t open to the West of course. I visited the Black Forest three years ago but didn’t go further east.

The old East Germany is to the north of where I am (Bavaria), hence the NATO listening station (and many other military bases). Being able to nip over the border into the Czech Republic is handy, as both beer and petrol are cheaper there. As regulars here will know, I’m a big fan of the dark lagers produced in the Czech Republic.
73 de Matt

The weather is consistently beating the forecast at the moment, so I got an early start up the Hochberg DM/BM-268 this morning. It is just a few KM from my campsite, so very accessible. The large amounts of rain have brought out the mushrooms: 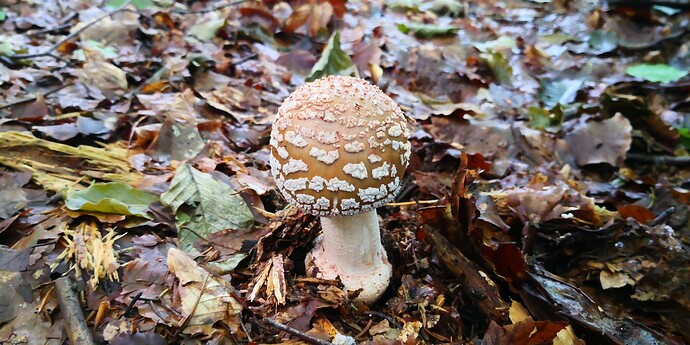 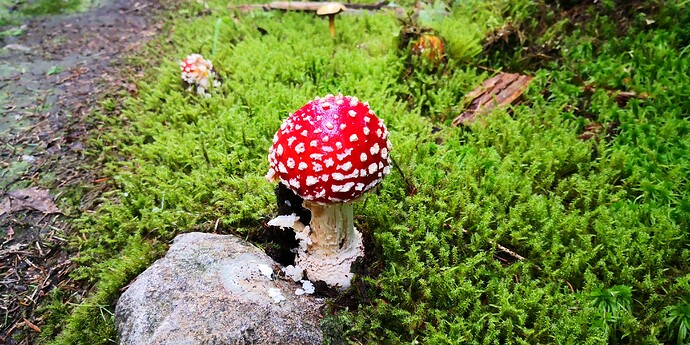 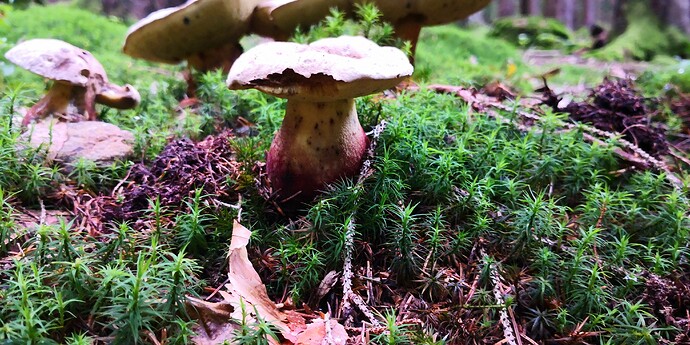 None of them edible unfortunately, quite the opposite. The summit is very boring, just a path going through the forest. The next summit: Großer Riedelstein DM/BM-036, was my 3rd unique of this trip. I tried last time I was up here, but didn’t have any change for the parking ticket. This time I was better prepared and soon making my way up the hill. There’s a shelter just below the summit that seems just about in the AZ, so this would probably make a good bad weather option: 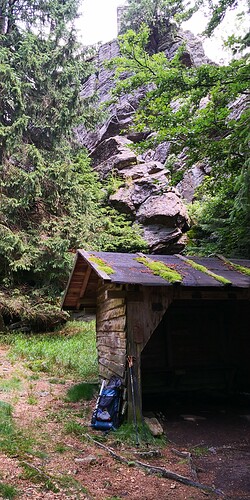 The summit itself does not look very promising from below, but there is, in fact, plenty of room for an antenna and a nice view to go with it: 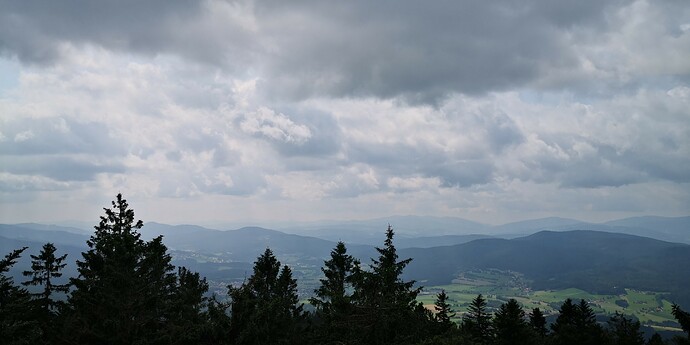 I was about to go QRT when I got a call from KD1CT on 20m, the first transatlantic DX I have had in quite some time. With the SFI at 85, there are some noticeable improvements. I also found out that I can stay out here longer than I had planned, so all in all, things are really looking up.
73 de DL/OE6FEG/P
Matt

21/07/21:
The mornings are very chilly at the moment: just 11°C. Getting out of bed in a tent is not so nice when it’s cold. For that reason, I switched to hot milk on my muesli which, to my relief, was actually quite good. The wild bilberries also helped improve things. Eventually, I got underway to my first summit of the day: Weigelsberg DM/BM-259. The AZ is very large and there is a shooting hide inside the 880m contour: 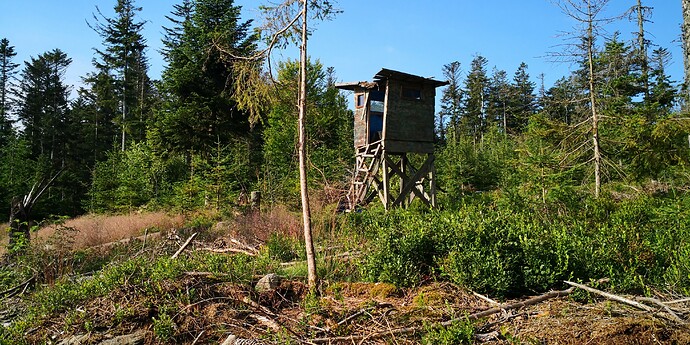 I didn’t use it, however, as there was a lot of new looking gear in it. I set up by a tree outside. The activation was fairly quick, as the early morning ones usually are. I finally found an edible mushroom on the way back to the car: 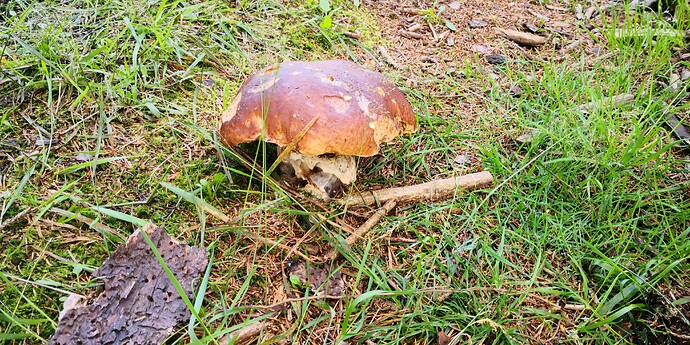 Sadly, the local wildlife had already taken too great an interest in it, so I left it where it was.
There is ample parking at Frath when tackling the the Wolfgangriegel DM/BM-261. As is the case with most summits here, I find the optimal route on the way back to the car. The summit is large and spacious with plenty of room for an antenna: 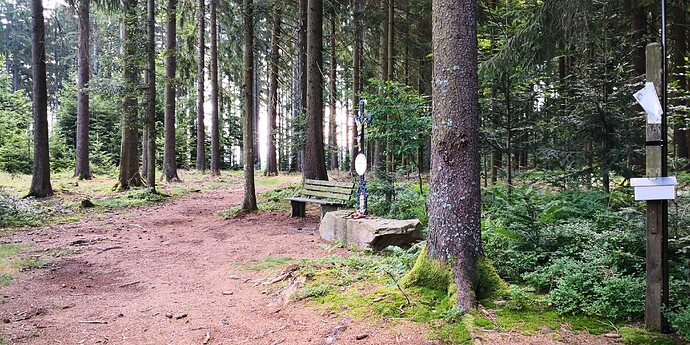 Unfortunately, as I was calling CQ, I got spotted for the previous summit: DM/BM-259. This is one reason why I do not like spotting via RBN and use either APRS or VK Portalog where possible. However, with the early starts, it is essential to put an alert in, in order to have sufficient chasers on band at 7 - 8 o’clock in the morning. Here is the log below, so please adjust the summit ref if needed: 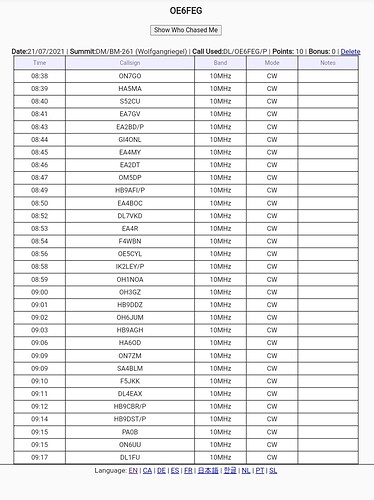 I am now being extra careful to delete the original alert before moving on to the next summit. I think most chasers realised what had happened, As I spotted the correct summit first via VK Portalog, before the old summit popped up.

The guest house at Frath was a welcome stop on the way back.

22/07/21:
Another cold start, but a fairly straightforward drive out to the first summit of the day: Vogelsang DM/BM-010. The first thing to note, is that the best parking spot does not appear on Sotlas until you zoom in to 50m scale. It’s at a place called the Naturwaldreservat Krakel. I was only 500m away at the ski lift, but in the event, the ascent was to prove more taxing than expected. I was using Kompass Wanderkarte, which showed many paths to the summit that simply didn’t exist. I ended up bushwhacking up the west side, when the only viable path (clearly marked on Sotlas) is on the south east side

. Another lesson learned. The summit is quite small: 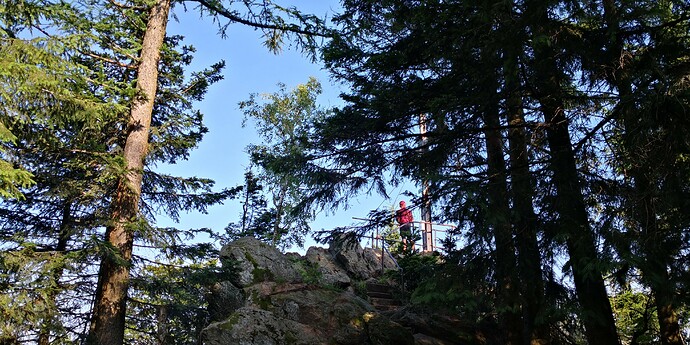 I had to string my antenna in the branches, which I knew from experience would work fine: 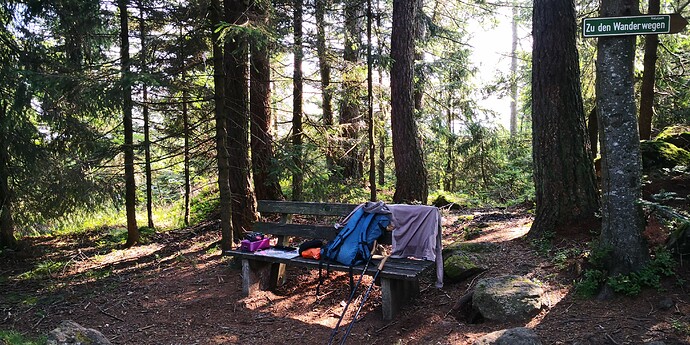 The name Vogelsang is very apt, and there was plenty of unusual birdsong to be heared. Due to the additional time needed to get to the summit, I only activated on 30m and headed back down quickly to get to the Einödriegel [DM/BM-258]. I also decided to omit Butzen [DM/BM-019], as I am still recuperating, technically. The Einödriegel is a very easy stroll along the mountain top, after a short chairlift ride to the Geißkopf. I was expecting plenty of room at this summit, so I took my 60m Windom. When I got to the AZ, I wasn’t disappointed: 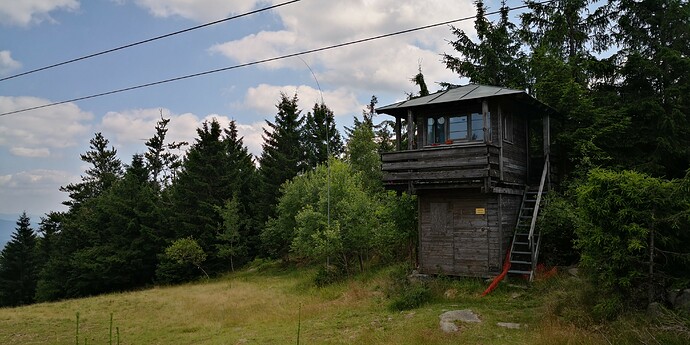 I was able to sit in the shade on the balcony and have my antenna nice and high off the ground: 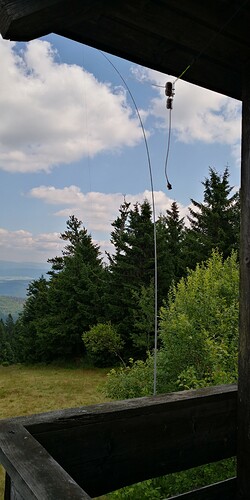 I even took my microphone, to do some SSB, seeing as I had so much time. After going through all the usual settings and spotting myself on 20m, I suddenly realised that my microphone no longer worked. The PTT keyed the rig ok, but no audio got through. I will have to compare it with an Elecraft mic when I get home, to see what’s going on. I was quite looking forward to speaking with some of the regulars, but as it happened, I just had to pack up and go back to the car. The weather forecast is not good for tomorrow, but as most days are better than forecast at the moment, I will get ready and go out as usual.
73 de DL/OE6FEG/P
Matt