Apologies for my curtailed activation of OE/TI-012, The Olperer this morning. Shortly after starting, the metal summit cross and my antenna started fizzing. When I switched off and disconnected the antenna I further enjoyed a couple of high voltage electric shocks, complete with sparks. Then the snow started falling. Keen to avoid any slippery rocks in descent we packed and fled the summit, anything but static! It felt like we were being encouraged with a cattle prod to get out of there!

Photo was taken before the shocks!

The descent was uneventful and later perversely the sun came out again.

I’ll try to do better in future. 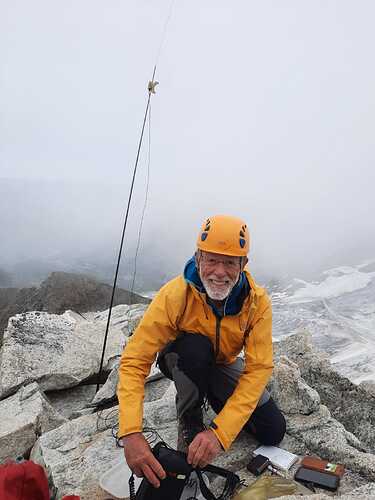 You did the right thing. Lightning, antennas and mountains is not a happy combination.

There were 2 other climbers who also fled the scene, collective responses!

Scary, good you were able to depart before anything bad happened.

yes, it was a worry but we were all fine and even the radio still works. We both survived being defibrillated.

I don’t think I have ever descended a peak so quickly, at least not without skis!!!