Here’s a quick report of yesterday’s activation of Big Frog Mountain, W4T/SU-039. This was only the second activation since the first in 2014. It may not have appealed to other operators because it’s just an 8 point summit and can only be reached by a 11 mile round trip hike. On the other hand, the XYL and I are training for a big hiking trip this summer, and the hiking guides describe it as a lovely walk, so it seemed an appealing choice. We drove the 2 hours from the Atlanta area and followed the forest road to the trailhead.

The XYL and the K9 leading in the distance. 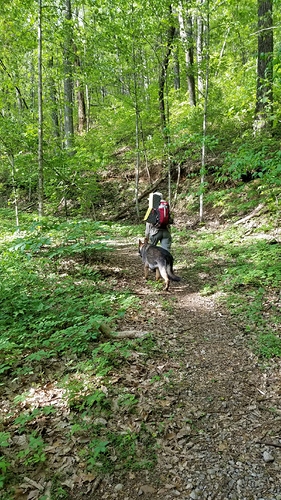 Again, a profusion of spring wildflowers to enjoy. Here are some of the highlights:

Pink Lady’s Slipper ( Cypripedium acaule Ait.). This member of the orchid family is always a prized sighting in the springtime in the southern Appalachians. 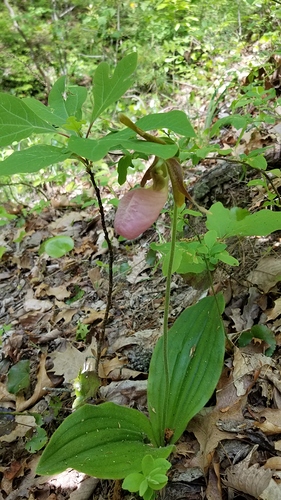 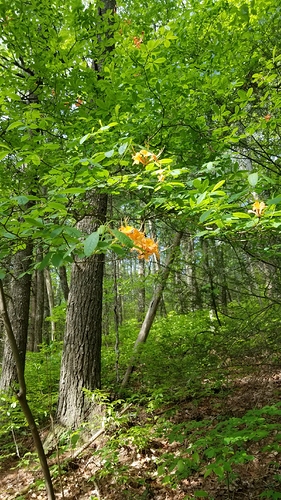 Foam flower ( Tiarella cordifolia ), poking up among the ferns 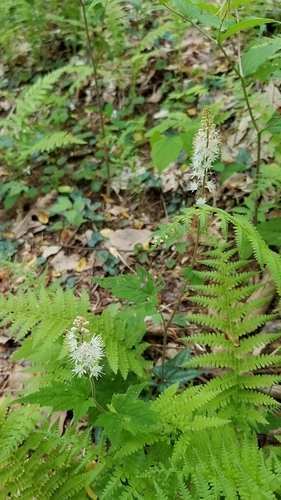 Mayapple ( Podophyllum peltatum ), with its canopy of leaves about 12 inches above ground sheltering the white blossom underneath. This proved the difference altitude and cooler temperatures make. These Mayapples were just now blooming at about 3500 feet above sea level, whereas near our home (about 400 feet above sea level) they bloomed over a month ago. 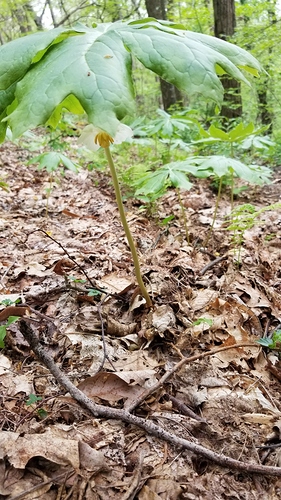 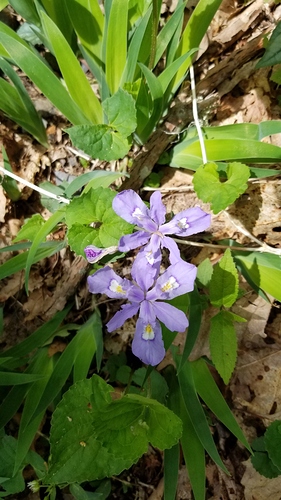 Bent trillium ( Trillium flexipes ), named for the bent stem that holds the blossom sideways, at a 90 degree angle to the plane of the leaves 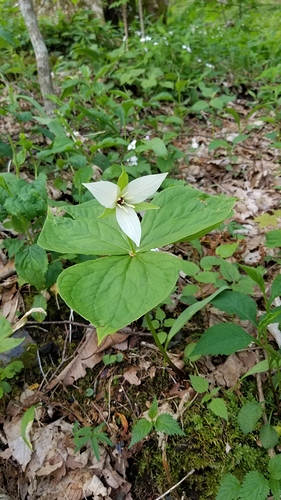 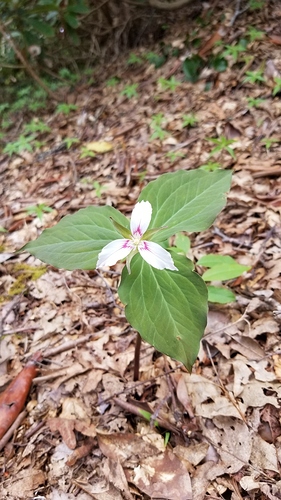 Canada violet ( Viola canadensis ) – shouldn’t it have a VE prefix? 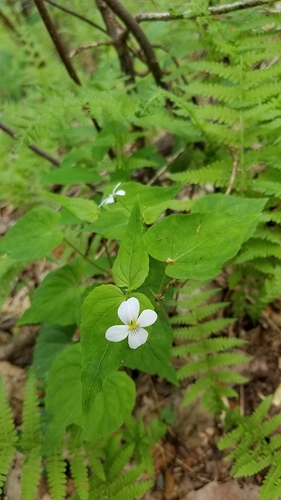 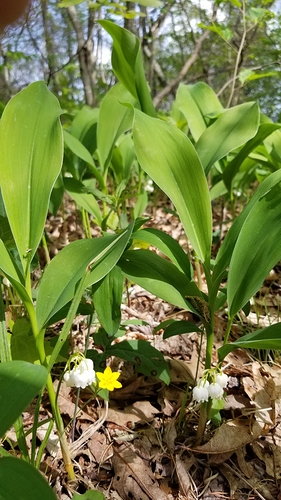 On one part of the trail, we found ourselves moving through dense huckleberry bushes. 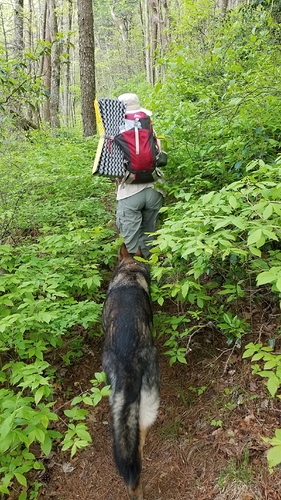 Even though the huckleberries were not yet ripe, we realized this was probably black bear habitat because the bears find these berries irresistible when they are ripe, sweet, and juicy. At this point it was time to start singing, as a national park ranger once told me the bears hear that even better than human voices or bells. Once again it was time to break out the mixed repertoire of sixties and seventies rock and roll songs and old Broadway musical hits. We didn’t see any bears, and they were probably most driven off by my offensive imitation of the Cockney vocalist in the Herman’s Hermits hit “Mrs. Brown You’ve Got a Lovely Daughter.” Anyone wishing to hear it will have to show up at the SOTA gathering at Dayton this month with ample supply of adult beverages…

After climbing 2000 feet over 5.5 miles, we finally reached the summit, which is unmarked but graced by a campsite and camp fire ring. Not much of a view from this summit. 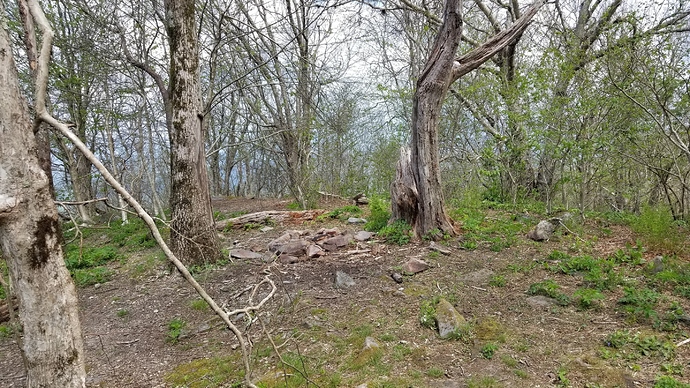 I set up the HF station nearby with my usual 43 foot wire sloping from the extended 21 foot fishing pole to the rig. 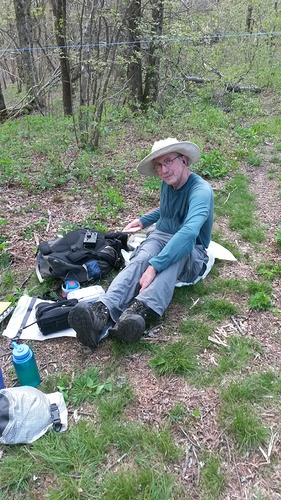 Spotting myself wasn’t an option, as my cell phone carrier had no service on this summit. Even SMS service was unreliable, and the SMS spots I sent were never posted by the system. Fortunately RBNhole did pick me up, both on 20 and 40 meters, but the bands were quiet and I was lucky to make enough contacts to warrant an activation. Two meter FM was also quiet, probably a consequence of it being a work day for many.

When I hike with the XYL, who is not a ham, the clock starts ticking when we reach the summit. Seventy-five minutes later I had set up, activated, torn down, repacked and was ready to leave. The descent was uneventful.

Oh, and those bears we never saw on the hike? On our departure, as we were driving the forest road toward the highway a big black bear crossed the road about 100 meters ahead of us. So they were in the forest, after all. Time to learn some new songs!

Thanks to the chasers, and 73,
Scott WB8ICQ

When I hike with the XYL, who is not a ham, the clock starts ticking when we reach the summit. Seventy-five minutes later I had set up, activated, torn down, repacked and was ready to leave.

Hi Scott,
75 minutes of mercy is quite a nice time for an activation, so you can consider yourself a lucky husband ham.
I saw your spot and stalked on you. I could feel your transmission but it was far tto weak for a QSO, as it happenned yesterday with most of the USA activators I stalked to for a possible chase. Only Pat KI4SVM had a good signal and we managed to complete our QSO with ease on 20m CW at 19h53Z.
I’ll keep looking for you and the rest of the activators in your side of the Pond.
73,

P.S. I would have loved seeing that bear… better from inside the car

Thanks for your posting with great pictures on the reflector regarding Big Frog Mountain, Tennessee. Takes me back 45 years, when we lived in Signal Mountain near Chattanooga. I remember making that hike and how lovely and wild the countryside was in the area. Of course, that was long before SOTA came to be.

my non-ham wife still hikes with me and we both greatly enjoy our SOTA travels. While unspoken and unmeasured, somewhere about one hour of operating time per summit seems to keep things going smoothly. It helps that she brings along a book to read. And she is getting pretty good at suggesting where to set up the inverted vee.