Saturday was the start of a nice three day weekend in the U.S. for Memorial Day. Memorial day honors veterans and is the unofficial start of summer. Dave, W2VV and I were absolutely itching to activate a hill after enjoying a wonderful Dayton Hamvention.

Having already activated almost every convenient and even not so convenient hill to our homes, we decided to go for a new hill…

Materials have been submitted for the soon to be W1 region which could be on the air officially soon…perhaps as soon as a month from now…so Dave and I decided to operate from the future W1/HH-002, Mt. Carmel/Sleeping Giant Mt. in Connecticut.

Dave rented a car near his home in Brooklyn, New York City, and then drove to his YL’s home (Diana, KC2UHB) to take her along on the hike, her first SOTA related experience.

About an hour later, Dave and Diana picked me up in Tarrytown and we all headed over to Sleeping Giant State Park.

We did not make any anouncement on the spotting system as this was NOT an official SOTA activation as the hill is not yet officially on the SOTA records. Once the hill is included, we will return.

Sleeping Giant State Park had wonderful tall and straight pine trees…excellent antenna supports…that reminded me of thin versions of giant redwoods from the west coast of the US.

After about a 1.6 mile hike we arrived at the summit and were surprised to find what looked like a long abandonded castle. We still do not know the history of the castle.

After some inspection, Dave and Diana decided to use a slingshot to mount an end fed zep 20m antenna to a treetop near the castle and then operate from a terrace one or two sections up in the castle. I operated my pac-12 vertical from the terrace itself. Dave fired up his FT-857 and I turned on the K3 and away we went. Many curious visitors came by and asked questions and were amazed that we could talk to such distant places. Operating from the terrace allowed us some space away from most of the summit’s visitors.

DX included Gambia and Cyprus (a new one for me). We were all thrilled with conditions and had a great time. I believe Diana may have enjoyed herself enough to return to another hilltop with us in the future. Cyprus gave me an S9+10db report as I ran 120w from the K3 to the end fed zep on 20m.

When some drops of rain started falling we wrapped things up and down the hill we went. The trail was well maintained and was very low risk from a tick perspective…an ever present threat in the Connecticut woods. The rain let up quickly and we arrived at the car almost completely dry. 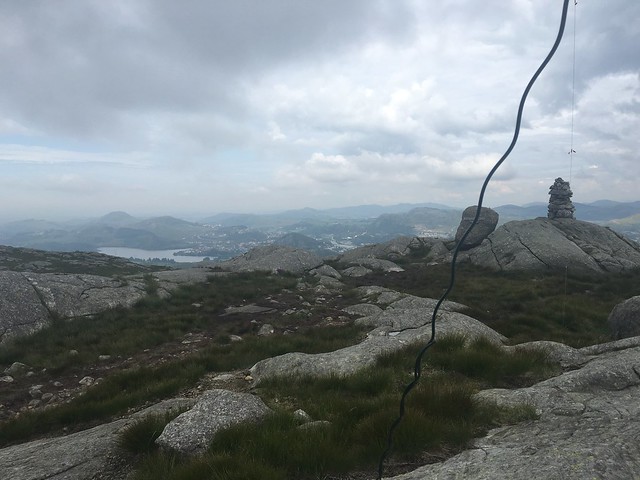 When we return to the hill, I think DX stations should be ready as I am sure we will have a loud signal from this summit in the future…this hill is an excellent opportunity for chasers looking for US contacts. Additionally, we hope to return with a directional antenna in the future.
Dave and I are considering plans for some sort of W1 birthday bash near or on the W1 official inclusion date…there could be several W1 activations that day…stay tuned!