I wasn’t expecting it to be so warm and as soon as I got out the car at 9am I wish I had taken my sunhat. The Met Office forecast gave 20% chance of rain and a ‘feels like’ temperature of 5-6C at the summit so I packed winter jacket, zippable top, over-trousers, woolly hat and gloves for sitting doing radio (Spoiler alert: people were sunbathing at the summit).

The drive to Wasdale Head from my village in south Cumbria is ‘only’ 48 miles but it feels much more with long sections on steep winding single track roads with tourists and locals all over the road coming towards you. It feels like 3 hours of rally driving there and back.

I had postponed the itinerary by an hour because the summit forecast had said fog/low cloud all morning but I could see it had largely cleared even at the start of the walk. 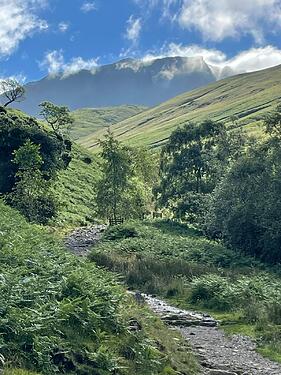 Leaving the NT Wasdale car park I kept to the north side of Lingmell Gill which was just as well as the wooden footbridge was wrecked [I guess due to storm damage] and the path there was closed. On the way back two blokes with an NT van were working on the bridge.

The path crosses the gill just before Brown Tongue. Wading across was much easier than last time I came this way two years ago as the water level was low. Although on my return some of the tourists in trainers were making a fuss about getting over.

I’m not keen on the so-called tourist route (via Lingmell Col) and like last time I forked off to the right to take the alternative route via Mickledore. The grassy path was a welcome relief from the endless stone steps of the main path. Even better I had this route entirely to myself and didn’t encounter anyone until nearing Scafell summit.

The path is well defined to the base of Mickledore, which is a steep rock and scree ascent. The top section of which [see photo] is a climb with both hands up wet rocks. 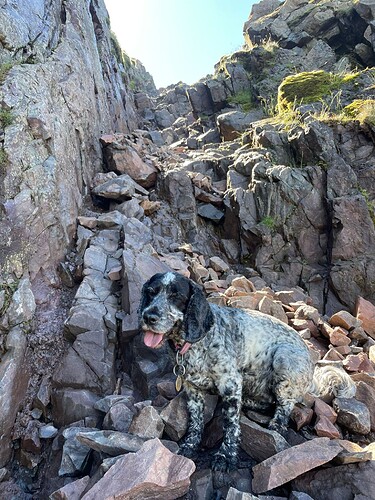 At the top of Mickledore and to the right is the very imposing Broad Stand which apparently only experienced rock climbers should ascent. Tempting though it is, it’s not a shortcut to Scafell [the Wainwright] for your average walker. 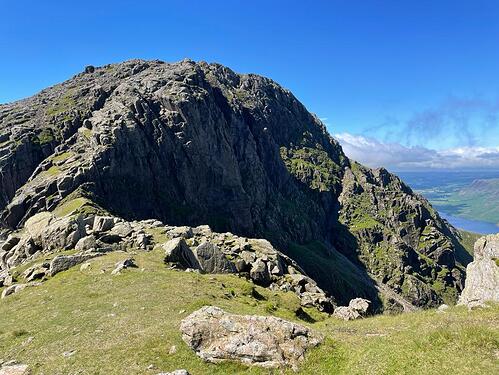 I turned the opposite way to follow a very rocky, often-indistinct path to Scafell Pike. It’s like a lunar landscape and I sometimes found myself rock hopping when I lost the path.

It wasn’t busy at the summit; the mist had cleared and it was surprisingly warm. 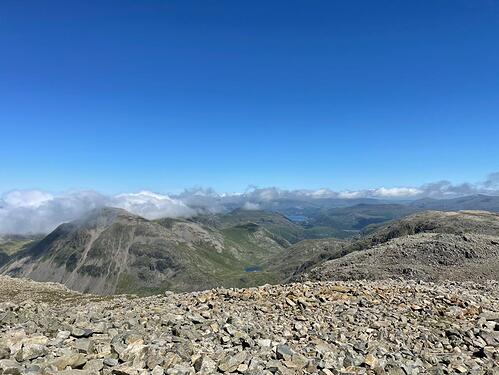 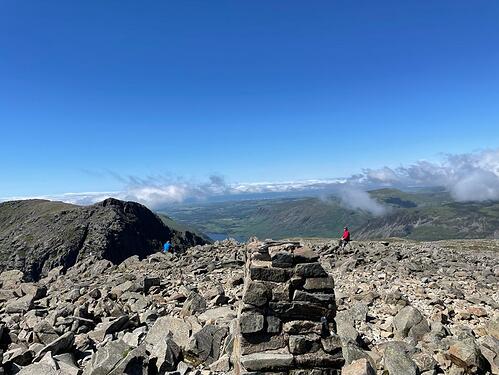 I got a 2m FM pileup straight away and I worked 18 chasers in 23 minutes including one S2S (John M0VCM/P on G/LD-003 Helvellyn). Radio reports using my 5W HT with a ½-wave telescopic whip (RH770) were excellent at this summit as you can imagine. 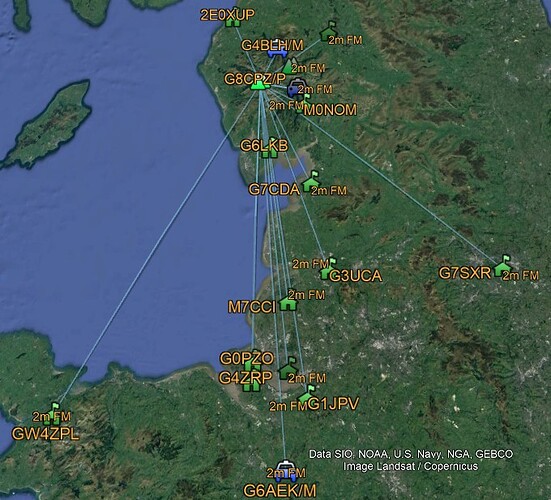 I took the tourist route down; it would have been too dangerous to descend Mickledore with tired legs. By this time, it was getting very warm in the direct sunlight. It was busy in the up direction. 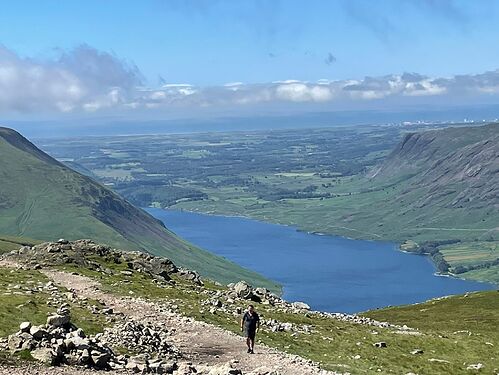 Some people were inappropriately dressed or obviously unfit – a few were sweating a lot. Being the highest mountain in England, Scafell Pike is like a magnet as a ‘must do’ or bucket list.

Back at the NT shop I rewarded my efforts with a Magnum classic chocolate ice cream before setting off on the long drive home.

Great report and pics Andy, thanks for the contact up there, and the points, not far off my second Shack Sloth now.
Best 73 Tony

Thanks for the nice report. I agree with your comments about the weather, I was expecting at least some clouds, but the sky was pretty much clear all morning. I’m sporting rather a lot of colour today! 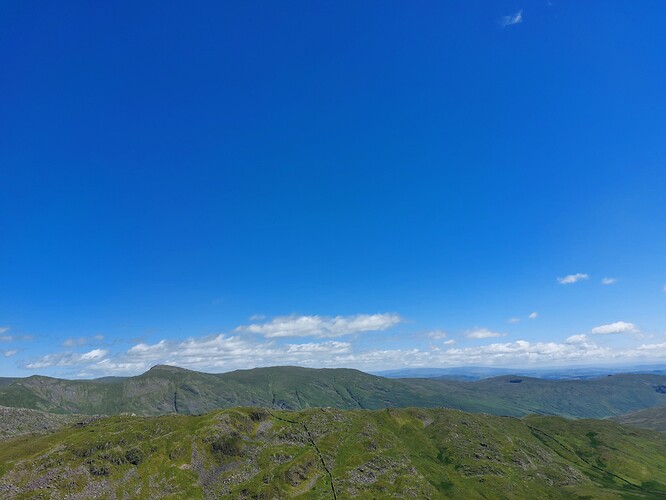 There doesn’t look there are nearly enough people (or drones) there Andy! The tourist path isn’t great and one day I’ll go from great moss as well, although that’s a lot longer.

I was pleasantly surprised by how uncrowded the car park and the walk up was (mid morning). Talking about it back at the start with the woman who serves in the NT shop she said visitor numbers are down recently and we both thought it was the high cost of fuel and cost of living in general.

Luckily I have many summits closer to home but look forward to going back there some day to do summits like Great Gable and Kirk Fell which I’ve never done before.

I was impressed to see one person collecting litter in a big bag and 3 or 4 others working on repairing or improving the main path.

Thanks for the nice report and pictures.
This reminds me of my activation of Scafell Pike in 2014. I walked up from Seathwaite.

If the person collecting little was a lady, chances are it the the person, who I can’t remember their name) who does that every day!