We had been rained off the hills the previous day, so wanted a better day. The forecast was for early rain, but due to improve with showers later. Since the forecast was for it to better in the west, we made our target the two Lleyn Peninsula two pointers. We were rained on as we drove to the parking on the section of old road at SH386468 the starting point for our ascent of Gryn Ddu. As we parked the sun started coming out.

We didn’t trust the weather so put on waterproofs and rucksack covers and headed up footpath, passing through a rough field to bypass a cottage which led to a set of inclines through a disused quarry. At SH384463 the footpath became fenced on the left and we made the mistake of leaving it to ascend up the rough spur as it was not clear we could get off now fenced footpath further along to go up hill. It was very hard work ascending through header and rocks, and we were soon overheating from the combination of waterproofs, exertion, some sun and no rain! A difficult wall crossing got us into easier grassier terrain, enabling us to head more easily towards the summit which was now in sight. It’s a double summit with the nearer one being the SOTA summit, but with access from the col between them. As we approached the col it became very windy and hard to move forwards against it, but we were also getting good views towards Snowdonia. The final ascent from the col involved a rocky scramble, but at least there was some shelter from the wind at the top. We did a VHF only activation as we had lost time by our difficult ascent, and the terrain was not HF friendly. We only got 6 contacts each but with no further callers and lunch eaten, we needed to move on if we were going to get a second summit in. We descended on the grassier side of wall, which was much easier terrain, and at the base we found a difficult to open gate onto footpath – with that hurdle passed it was an easy walk back down through the quarry remains to the car.

At 3pm we were running later than intended given we wanted to do Yr Eifl , so we packed up quickly and drove round to the large car park on the far side of Yr Eifl at SH305441. There was an interesting sculpture in the car park but we headed up the hill, following good paths, though there were a number of false summits, but we finally found our way to the summit with a curious sculpture attached to the trig point. It was still windy, though not as bad as the col on Gryn Ddu, but despite the later hour there were more people on the hill. We made use of the shallow shelter nearest the trig point, and using an extension cable attached the MFD for 2m to the sculpture. We only had time for 2m FM again, this time getting 8 contacts each.

The return walk in fading light was pleasant, and there was still enough light for us to get some photos of the car park sculpture. We packed up the car, and just we about to drive away, it started to rain. That was good timing – despite early and late rain it had stayed dry for all the time we were on the hill. 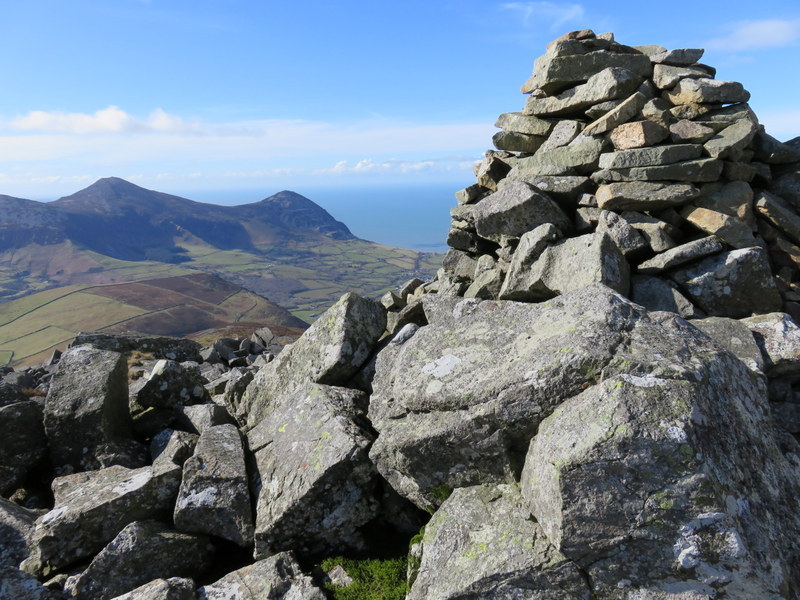