Some improvements such as a new column ‘His country’, an exported ADIF file OK now for the database (thanks OM1AEG Anton),
file name when importing a workfile (thanks DJ2TG Thomas),
and a portuguese version (thanks F8ATS Tony).

Have fun in SOTA
73 Alain F6ENO

Thank you Alain for continued support of Saisie SOTA - the updated program with the improvements is now installed on my shack PC and laptop.

Hi all,
A new improvement in the program (V16-5-0-0), thanks to Guru EA2IF.
The country displayed was that of the correspondent’s callsign; now it is the location of the transmitting place.
73 Alain F6ENO
http://f6eno.pagesperso-orange.fr/Telechargements/Saisie_SOTA_setup_V16-5.zip

HI Alain
Thanks for update. I will install it on return from Portugal. I think I may have found a bug when editing a previously entered file. But I need to study how and what happens when I get back home. For now I have no problem in creating a daily log, and submitting it to the database. However, if I reopen the csv file in Saisie it appeared to replace my summit reference with the list of names instead. More research on this problem when I get home next week.

Thanks Phil; I’m waiting for your info.
73 Alain

Bonjour Alain,
I still have the V16.4.0.0 and upon opening the program, I was expecting a message informing that a new version 16.5.0.0 was available for me to accept and “do the automatic upgrade”. But this hasn’t happened.
Is this normal and the only way to get the upgrade is downloading and installing the full new version?
I remember the automatic upgrade worked fine for at least some of the previous versions.
Thank you.
73,

Thanks Phil; I’m waiting for your info.
73 Alain

I have updated my Saisie SOTA versions on my laptop and desktop PC to V16.5.0.0 and have now had a chance to re-create what I believe to be a bug in both this new version and the previous 16.4.0.0 version.

The problem occurs on two of my PCs when I recall a previously created ADIF file and I complete the logging of a summit at a later time or to edit the previously saved ADIF file. This problem happens using the callsign of CT7/G4OBK/P as both operator and station in the setup.

I have the following columns selected for import in the logging display window:

When I open a previously saved ADIF file the My SOTA Ref column becomes a second His Name column (although the heading still says My SOTA Ref). My own summit reference is no longer there, being replaced with this second column of names. Interestingly though, if the QSO was an S2S the letters S2S appear in the My Ref column next to the duplicated name of the operator. At the same time the name of the last operator worked (In this case Tonnie - there is only one Tonnie PA9CW) the name Tonnie appears in the My SOTA Ref box in the log entry window. not My Ref that I previously entered when I created the original file.

I don’t have any other problem with the later Saisie software if I complete the file in one attempt and don’t return to edit the file - which is when the problem occurrs. I tried this on the Day 7, Day 8 and Day 9 ADIF files from my recent CT tour and the problem occurred every time. If you need any more info please get in touch.

If any other users would like to experiment themselves it may help Alain find a permanent fix if they confirm my findings, by recalling back an ADIF file and seeing if they get the same result as I do. Saise SOTA for me is an essential part of quickly creating a daily activator log after a session on the hill, so I hope this can be easily fixed Alain!

Photo screenshot of what happens: 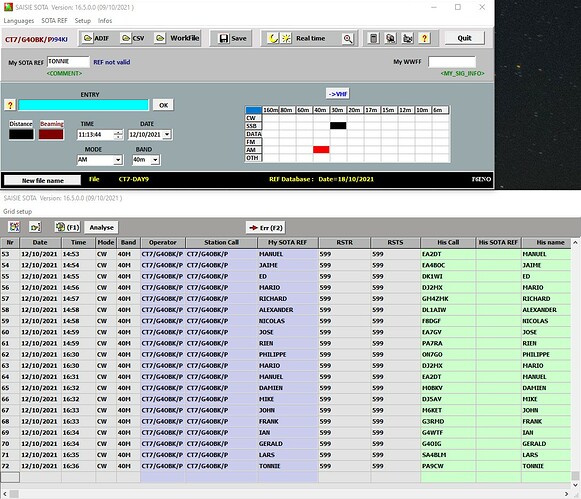 Hi all,
I confirm that the problem found by Phil @G4OBK is also present on my version 16.4.0.0 (I haven’t yet installed the new V16.5.0.0.).
What I’ve got after opening an existing .adi file is the Grid setup slightly modified.
This is what I had before closing the program:

After having closed the program, I reopen it and load the same .adi file I was using before. This is what I get now:

imagen1776×417 178 KB
As you’ll see, the RSTS column has become visible. But all the rest of the information is there and correct, so not a major problem.

Thanks for checking Guru. Yes, the RSTS or RSTR columns are not important for us types who record 599 or 59 in our own computerised activator logs, however in my case where the My SOTA Ref column is being replaced by another His Name column, means when I import the ADIF file into my logging program I get an extra column of names where I should get my activated reference.

Hi Alain and all SAISIE SOTA users,
I have finally installed the last version 16.5.0.0 and I think I’ve found the problem initially mentionned by Phil @G4OBK.
When I install the program, one of the first things I do is setting up the grid.
This is the way I setup mine: 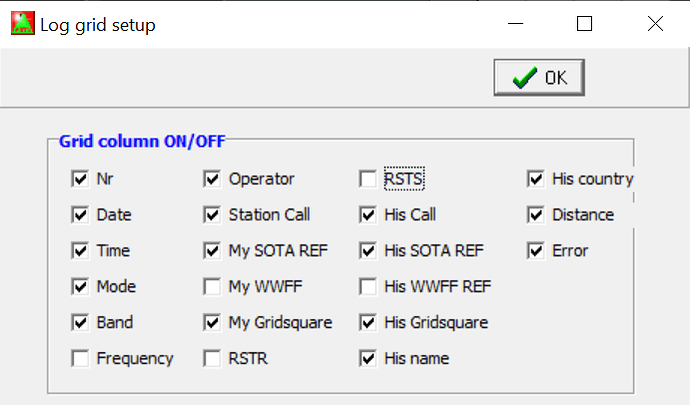 I’ve noticed that, for some reason, this setup doesn’t get correctly saved after quitting the program and the next time I open it, I find that the RSTS column is being displayed: 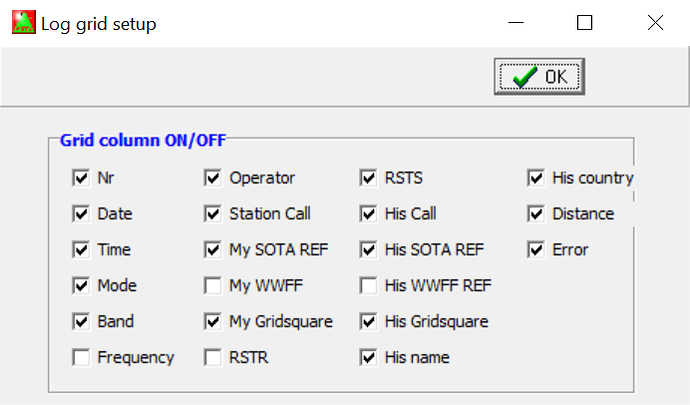 No matter how many times I unclick that box it always appears as ticked the next time I open the program.