I made my HAM license as a kid in 1983 under supervision of my father, but abandoned the hobby after a couple of years. I revived it in mid-90s with my then-friends, only to abandon it again when real-life events took precedence. Now I’m trying to return again, although as a city-dweller I’m quite limited. I bought a radio and set up the multi-band EF antenna from the 6th floor balcony to a nearby tree, but I quickly realized that there are problems. Two words: noise, neighbors (on a second thought: actually only neighbors, as I can turn my noise sources off).
I discovered SOTA, but couldn’t even start serious chasing. First, I live in an apartment builing and I can hear only the closest activators on 2m from the hills that can be seen from my apartment. Anything further away is drowned in the noise from either nearby Tetra transmitters or various SMPSs that are omnipresent nowadays. And second, looks like many activators are retired and activate the summits mostly either during the time I’m at work or, on weekends, when I “have to” spend my time with the family. Not wanting to give up again, I eyed summit activating.
My friends and me were planning a hot air balloon flying weekend in Notranjska region in Slovenia. In summer, morning flights usually end at about 8:00 and evening flights begin at about 19:00, so there is plenty of time for other activities. Usually we just hang with other balloonists or do sightseeing and geocaching, but this time we decided to do some hiking. Our plan was to visit Veliki Snežnik (S5/BR-001) and look for the geocaches along the way.
I figured it’s time to break the ice and packed my FT-817, Ilertenna tuner with linked EFHW antenna and a fishing pole before leaving home.
After a nice morning flight we left the trailer with our balloon at the guesthouse and drove to Sviščaki, where the trail begins. We had to make a detour because of the roadworks and it took us longer than expected to get there. On the unpaved road we drove as far as we could to save some time (each meter you drive is meter that you don’t have to climb, HI) and left the car on a parking where signpost announced an hour hike to the top.
Being late worried me because I feared my weak QRP signal will be overwhelmed by contesters, which will start at 1200Z (WRTC 2018 and IARU HF WC!), and finding a free frequency will be a challenge in the first place. On the other hand, I figured many chasers will be at home getting ready for the contest, and I will have no problems to get the required number of QSOs.

Below: view to the W: trail from Sviščaki; col in the center is the highest parking, but is in 4x4 territory; center-right on the horizon: mt. Nanos (S5/TK-009 - Suhi vrh) 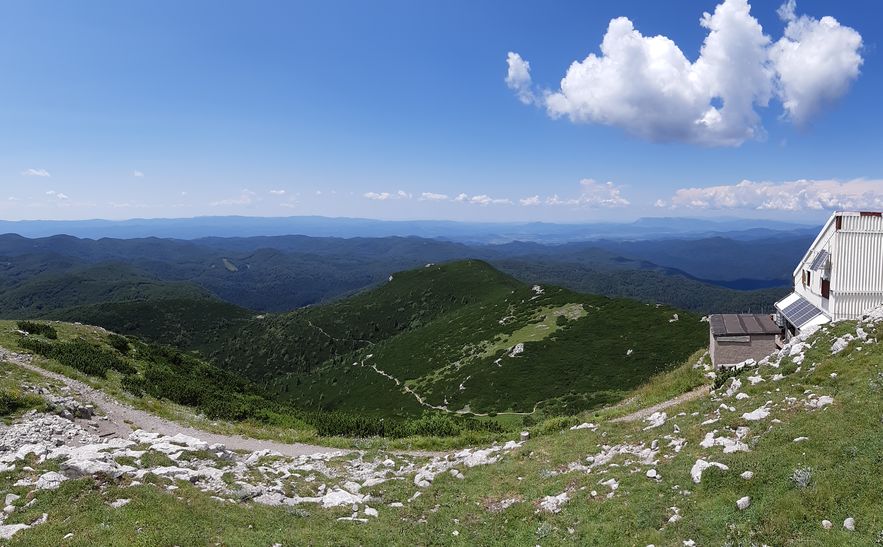 When we arrived to the top, my friends had a rest, a cold beer (yay mountain hut!) and a hunt for the geocache. With only half an hour before contest I didn’t want to waste my time. I proceeded with setting up my gear, where a tower base, owned by local Radio Club Snežnik S59DGO, was most helpful (they have a VHF/UHF contest location and run an APRS Igate in the hut there). When I powered my radio up, the first thing I noticed was unusual silence on the band. No noise, no chirps, whistles or crickets that I’m used to at home. I even had problems to tune the antenna and at first I thought it’s broken, because there was no noise to tune it to by ear. But I quickly adjusted to new and unfamiliar conditions, found an empty frequency on 20m SSB and sent a self-spot with 20 minutes to spare. 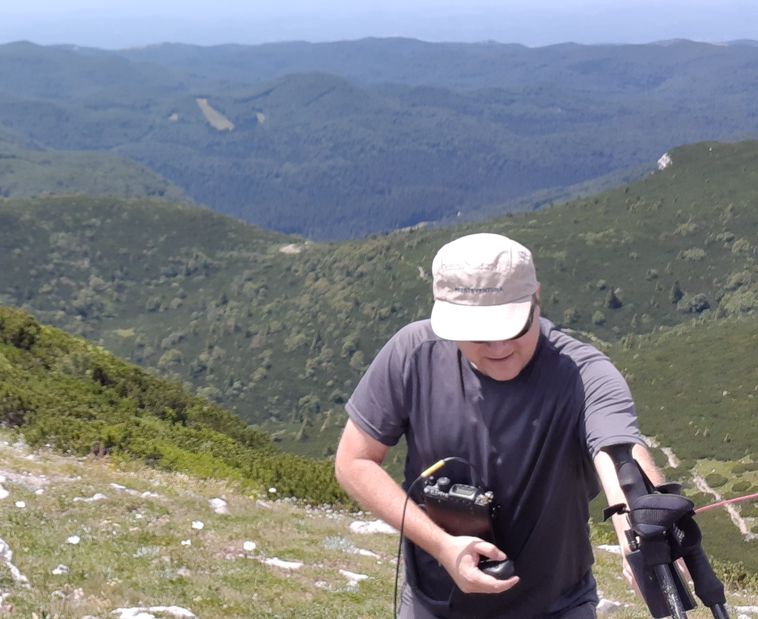 After a first CQ, S56THX came in with booming signal (WOW!), then another CQ and SA4BLM replied, almost breaking the s-meter needle here (WOW, SOTA is so easy!), then another CQ and… nothing. A couple of CQs more and still nothing… (WTH!) After 10 minutes of unsuccessful CQing and tuning for S2S I decided to extend my antenna and switch to 40m.

I sent a self-spot just before the contest start and called a few CQs wihout reply (where is everybody?). At exactly 1200Z a station a kHz away almost blew the lid off my radio calling CQ contest. I tuned around to find a quiet spot but was unsuccessful. I needed a break. First, I had a cold beer that my friends (curious what I’m doing) brought me, and then switched back to 20m, after all, there’s a lot more space there.
Luckily, 20m was much less crowded. I (increasingly desperate) called CQ and looked for S2S for a while. I even heard someone calling “Summit to Summit!” a few times, but he didn’t come back after my reply. After a while, EA2DT answered and gave me some hope, and shortly after that I even had a S2S QSO with S57MS/P on S5/BI-002, which made my first activation a success!

Below: Where TH is everybody? Center-left: tower base courtesy of S59DGO 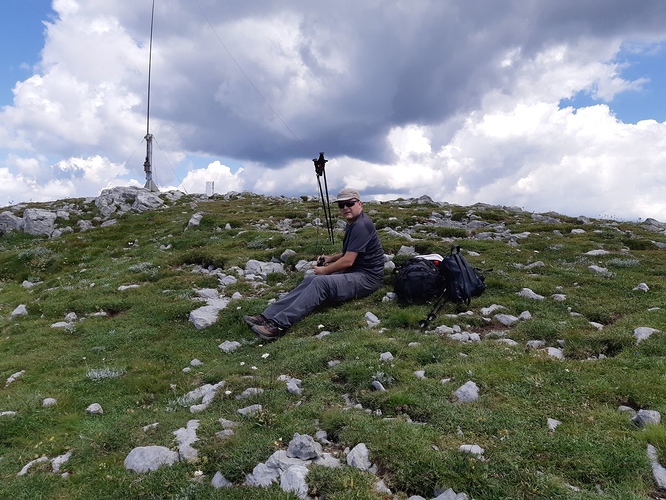 All the time I could hear short bursts of static in my radio from the storm clouds to the north and after an hour and a half of me playing radio they slowly came closer. I hoped to have time to whip out VHF antenna and score some local QSOs, but my friends felt that it was time to leave. After all, we had to make a lunch stop and be back in time for the evening flight.

Below: a view from the temporary shack in the S direction: southern coast of Istria peninsula, above it on the horizon mt. Učka (9A/PH-012 - Vojak), Kvarner bay with northern tips of islands Krk and Cres (IOTA EU-136) 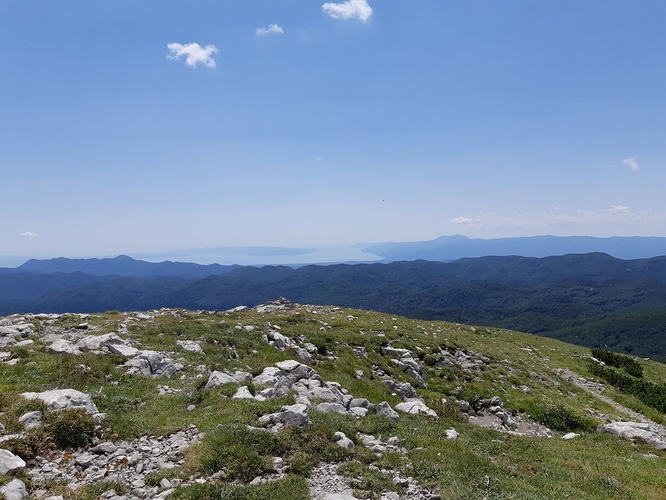 Descent and drive back to the civilization was smooth and uneventful, interrupted only by a few short geocache searches. After a cold beer and a meal in Ilirska Bistrica we returned in time for the evening flight, but that’s already another story.
Although my first activation didn’t go as expected, it was still a great experience an I learned a few things. I expected to attract a lot more chasers, especially because of the contest, which didn’t happen. Not sure why, maybe they were turned off by the contest crowds, or it was propagation, or maybe my gear has problems, or I didn’t call CQ often enough. Next, I expected my signal to be drowned by contesters, which also didn’t happen, at least on 20m. Looks like on some bands there is a no-contest zone that I was not aware of, doing my exam long time ago. Regarding my antenna support, it was pure luck. Not all summits are that great equipped for antenna setup, so I’ll have to prepare some guying gear for antenna pole. And last, logging on the smartphone is fiddly, I somewhat struggled even with four contacts, biggest problem being small keyboard and screen in bright sun. Prepared paper form and pen is much simpler to handle and readable in all conditions.
Anyway, looking forward to next SOTA activation!
Thanks to the chasers who answered my call and thanks to my friends and YL, who let me play radio while they had to endure great view, warm sunny weather and cold beer.

Congratulations on your first activation Valdi. Thanks for your great report and photos. Pity about your lack of contacts. What did you learn about the day and what would you do different?

Geoff, I’m glad that you liked my report.
What did I learn? Well, almost everything I did was new to me. I have very little experience operating at all and this was the first time I operated on HF outside my apartment.
Even setting up the antenna was new to me, to mention only one thing. Of course I did have a plan how to set it up but didn’t know what to expect on the summit in terms of supports, wind and such.
The most surprising thing that I encountered was almost complete lack of noise, at least compared with my home environment (except of occasional static discharges from thunderstorms in the distance). Manual tuning was a challenge for a moment or two until I realized what’s going on. At home I adjust the tuning knob until the noise is the loudest and then check it with SWR meter, but on the summit there was no audible change in noise volume at all and I thought the antenna is broken.
There are a few things more, but the main points are listed in third paragraph from below.

I’ve given up messing about with a smartphone to log summit activations now; pen & paper is the way to go for sure.

You were lucky with the storm static noise; I recently tried activating F/JU-049 and after a battle through thorns and other spiky plants to find the true summit marker, I set up all the HF gear only to find the bands completely wiped out every few seconds with static booms and crashing - I didn’t manage a single contact ha ha

That’s how it is sometimes I guess!

Congratulations on the activation Valdi and well done for giving SOTA activation a try.

I have done a few activations now and, yes, it is amazing how much less noise there is on HF away from towns. A complete surprise when your S-meter reads zero! I have also found that you don’t have to get very far out of town to get much lower noise levels.

To tune my antenna, I usually have my FT-817 display set to show SWR and just quickly tune for minimum SWR.

On some activations, I have had pile-ups, on some it is a struggle to get 4 contacts and, a few times, I have not even managed 4 contacts. Not knowing what to expect maybe makes it more fun ?