Does anyone know if the work on this path has indeed been completed? It’s target date for completion has now passed, and I was going to go and walk it this morning. Then I had a word with myself and thought I’d better actually try and research that the path had actually been laid! It would be soul-destroying to walk up from Rushup Edge onto the Chapel Gate Track and then discover the same vast gooey eroded bog and no slabbed path!

I have tried searching all round tinternet this morning, but can’t find anything further than the plans (link above).

According to Twitter laying the new path started on 1st Feb but like you can’t find any details of progress or completion. They’re probably still looking for their mini digger that disappeared into the mire

"Thank you for your recent enquiry into Moors for the future’s work on Brown Knoll. This work has been suspended temporarily, owing to the bird nesting season and we intend to return to finish it as soon as the nesting season is over, which will, most likely, be towards the end of July or early August.

Thank you also for bringing to our attention the lack of any update on our website, we shall look to change this in the very near future.

You are absolutely correct in your comment that this will benefit both walkers and wildlife, we are working closely with Natural England and the landowner to make sure this piece of work does exactly that. I sincerely hope you enjoy a less muddy walk on this hill later in the year. "

Yes I thought that too Andy. Their reply makes it look like my original email could have been rather more blunt and mithery. However, I can assure you that my enquiry was similarly pleasant and polite in tone!

Well I believe the path is now complete, so I’m going to give it a go tomorrow morning to open my SOTA account for 2017.

Mmmmmmm. I do love this little idiosyncrasy of your updates - telling us all what soup you will have or had. 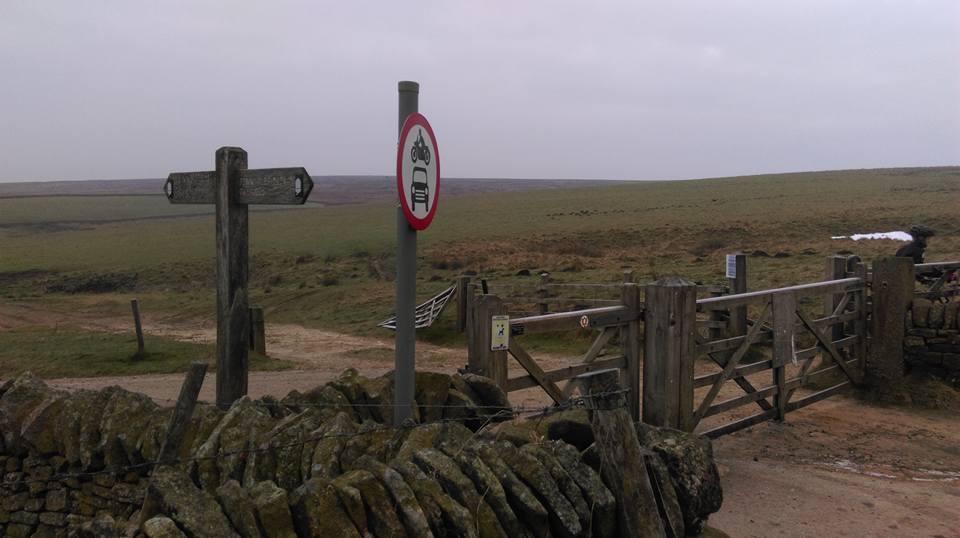 Sunday 22nd January 2016. Other family members all set for a lie-in until PM. Weather forecast suggesting a clod, blustery but dry day. Well one out of three ain’t bad I suppose. 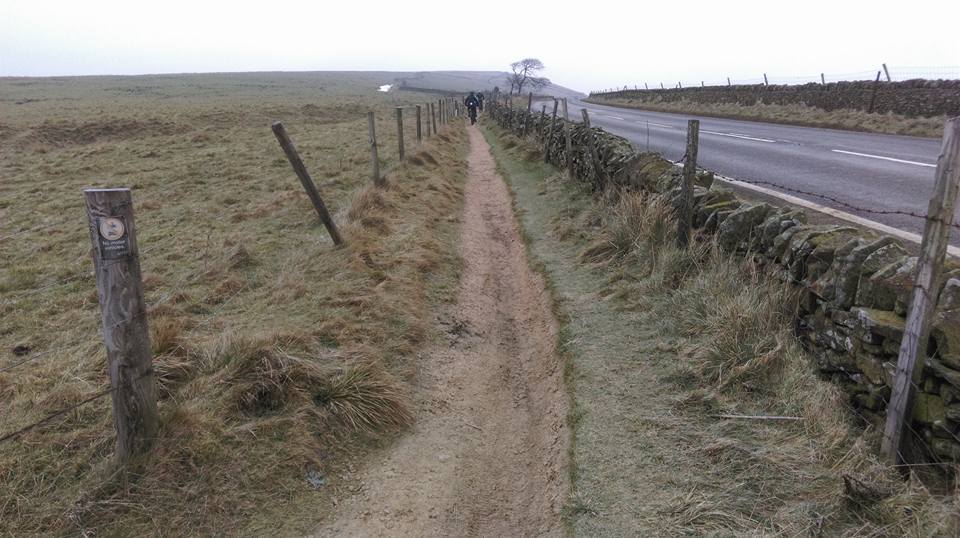 After the usual preparations, and the less-than-usual breakfast of porridge (lovely, must do this more often), I drove out from Macclesfield through Rainow, Kettleshulme, Whaley Bridge and Chapel-en-le-Frith. I parked in the lay-by on Rushup Edge, opposite the access track to the “No Car Cafe”. 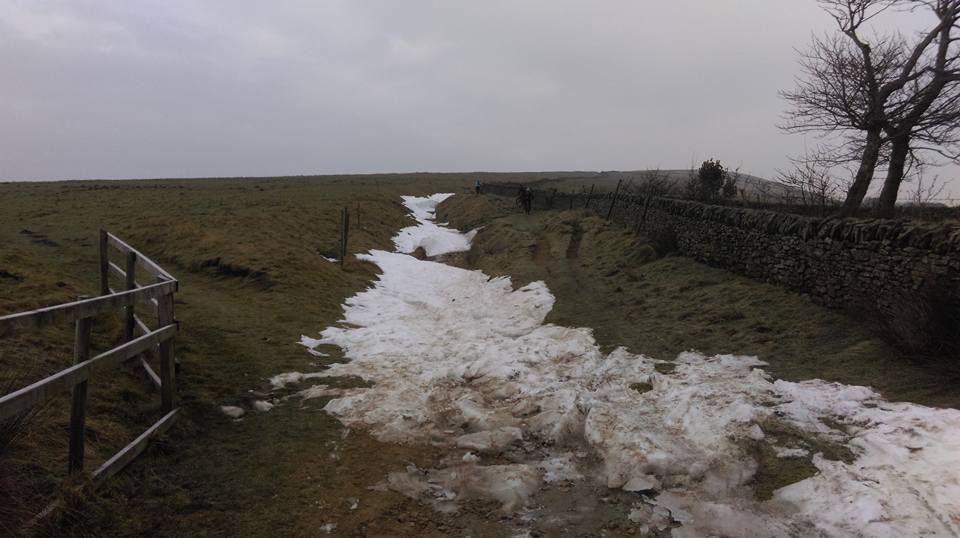 I had approached Kinder Scout from this point twice before, but both times before the existence of a good path across the moor to Brown Knoll. This would be a significantly easier prospect. 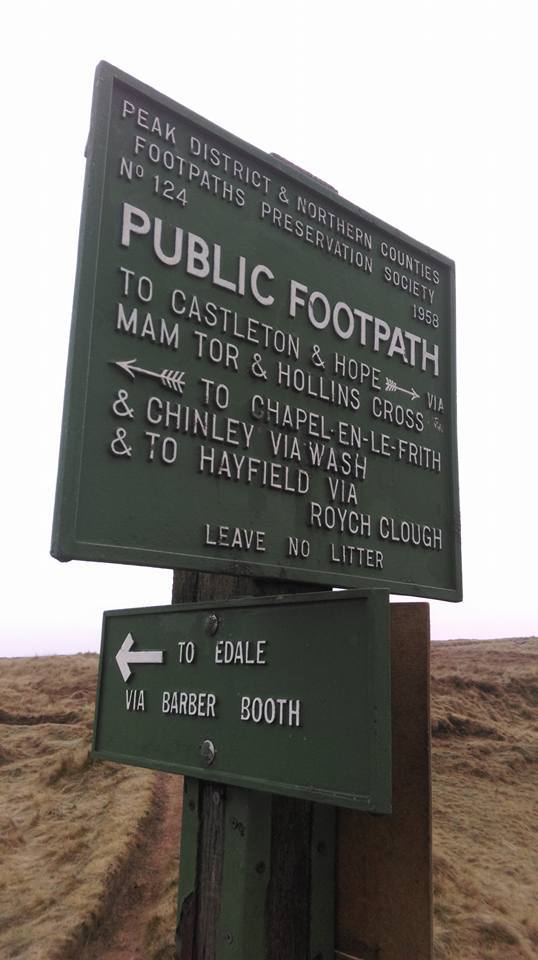 The path initially follows the road then climbs gradually onto the moor. At the corner of the Chapel Gate Track, from where I previously took a compass bearing and tried to walk in a straight line, before me now was fabulous newly laid flagged path. 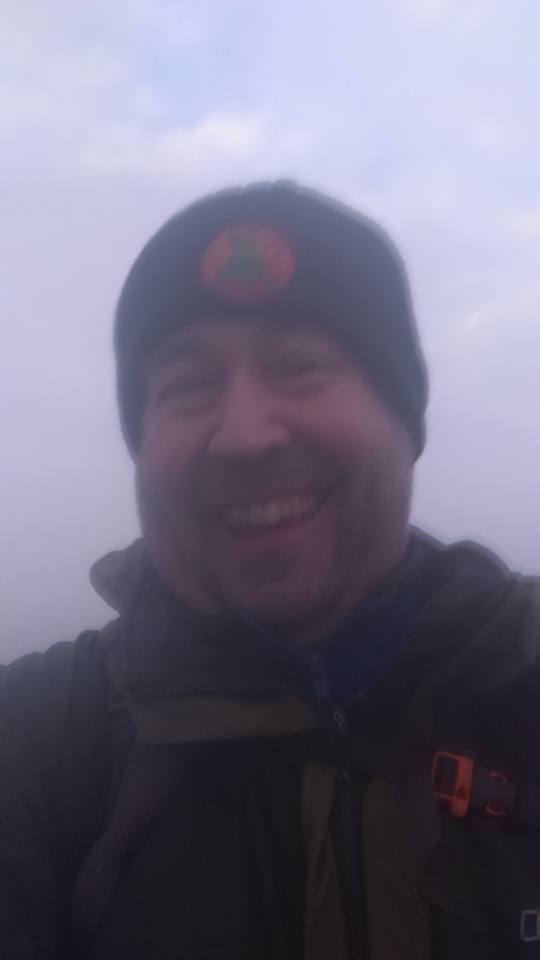 I just kept going and kept going along the flags with nothing much to see. I couldn’t decide if it was quite nice or quite boring. But I think it must have been quite nice, because I was really enjoying my walk. 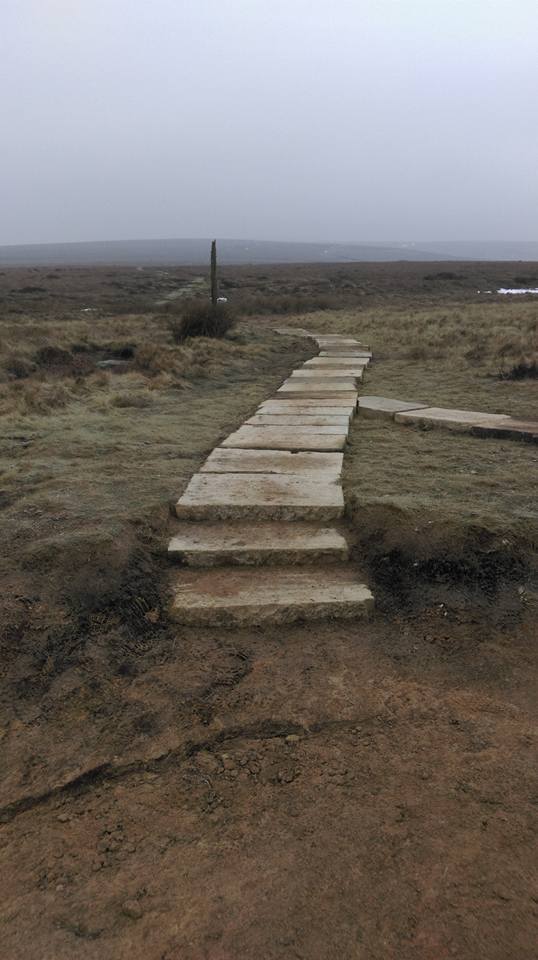 I paused at the trig point at Brown Knoll, and to my surprise, another walker followed up behind me. We had a brief natter, and found we were both heading to Kinder Low from here. “Shall we walk together?” he asked, which seemed very pleasant, so we did. 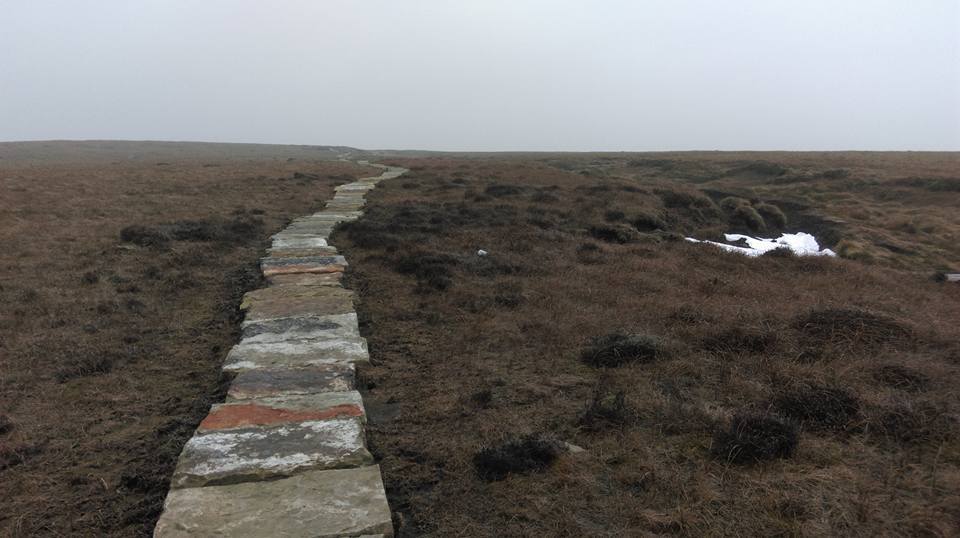 I’ve always found that you seem to eat up the ground and cover distance almost without noticing when you’re having a good old chinwag with someone. The other chap was called Andy, and was doing a circular walk that would take in Kinder Downfall and Grindsbrook Clough, before finishing at Barber Booth. 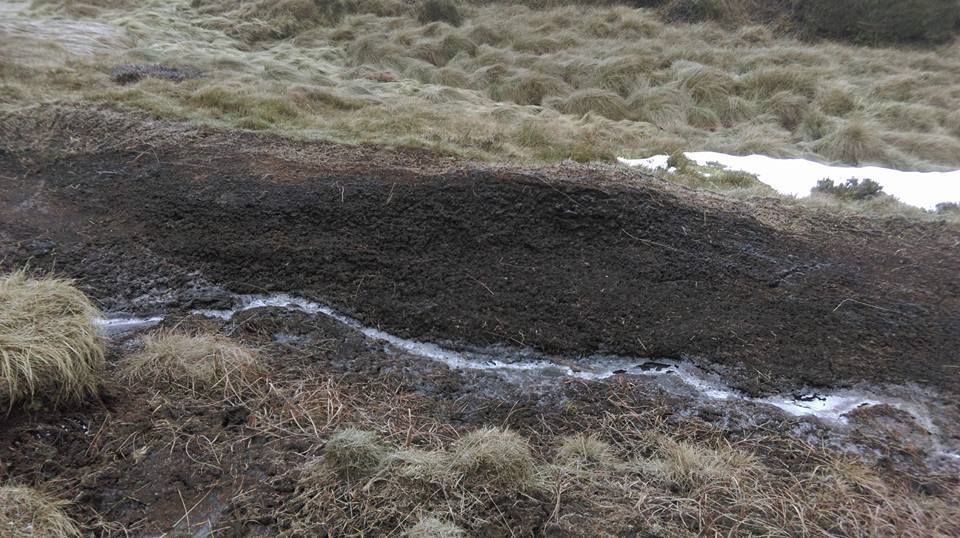 Even though it was still mid-morning, both Andy and myself admitted we were rather hungry. As we passed the sheltered area beside Edale Rocks, Andy suggested stopping there. I pointed out that we were only five minutes from where I was stopping for a while anyway, so we continued the short distance to the trig point at Kinder Low. 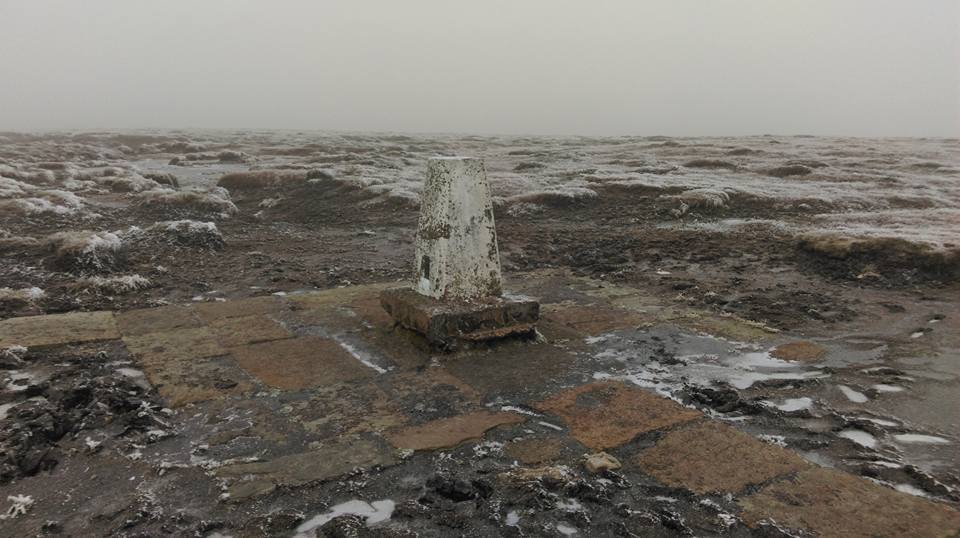 Before setting anything up, I enjoyed my ham hock & vegetable broth from the flask. Then, as Andy said cheerio and got on his way, I set up the SOTAbeams Bandhopper 4 linked dipole. I had promised the chasers some 80m activations over Christmas and failed to deliver. Time to put that right, at least. 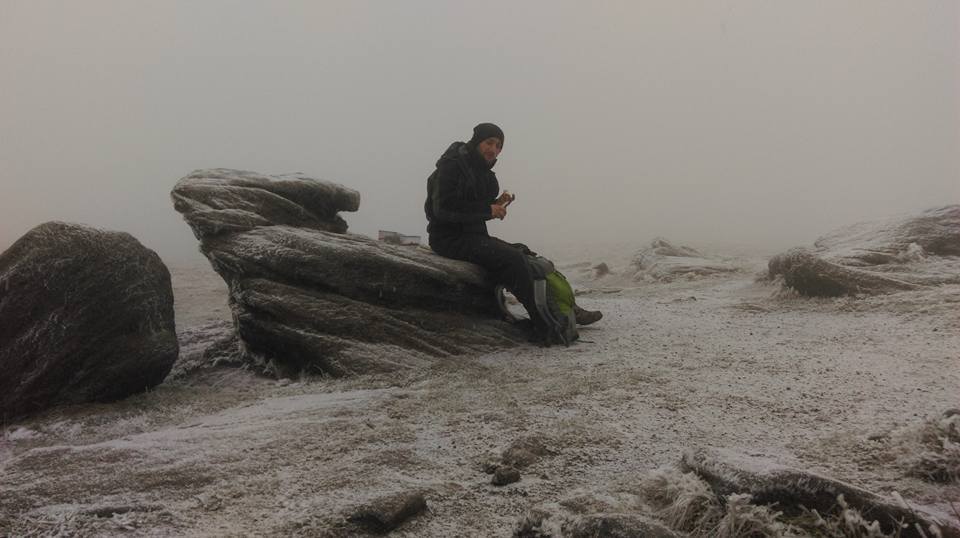 It was an increasingly wintery scene on Kinder Low. The ground, rocks and trig point were already crusted in ice, and then some light but persistent snow came down too. This was not in the weather forecast, a fact agreed by every walker up there! But also wrong from the weather forecast was the prediction of 25mph winds, gusting 45mph. There was no wind! So overall, I had to be happy! 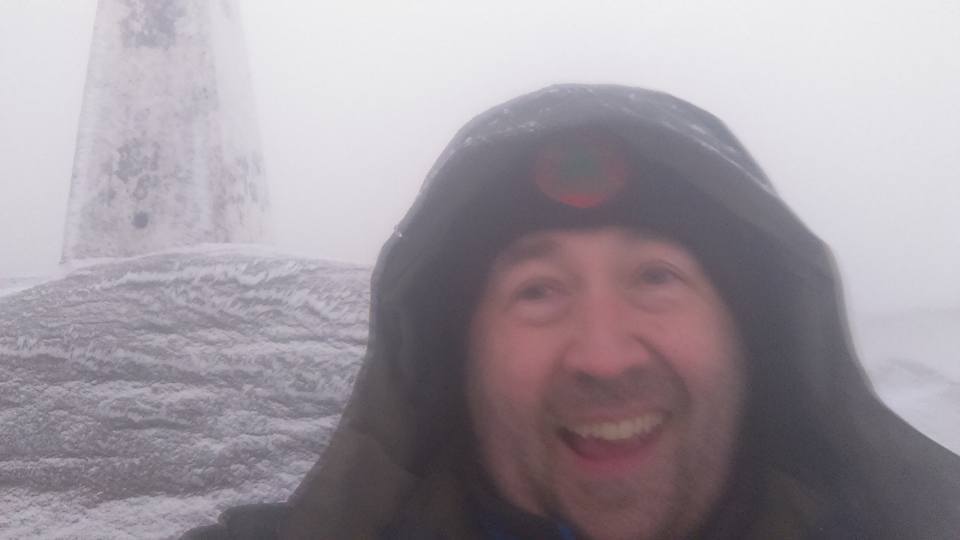 While setting up, a sizeable group of young (early 20s) walkers passed by. “What are you doing?” was the typical question. “Amateur radio” was my blunt response. “Oh you do all that don’t you?” one of them said, gesturing towards a young chap in a bright red jacket. He did tell me his M6 callsign, but I have forgotten it. I think he said his name was Andy too. 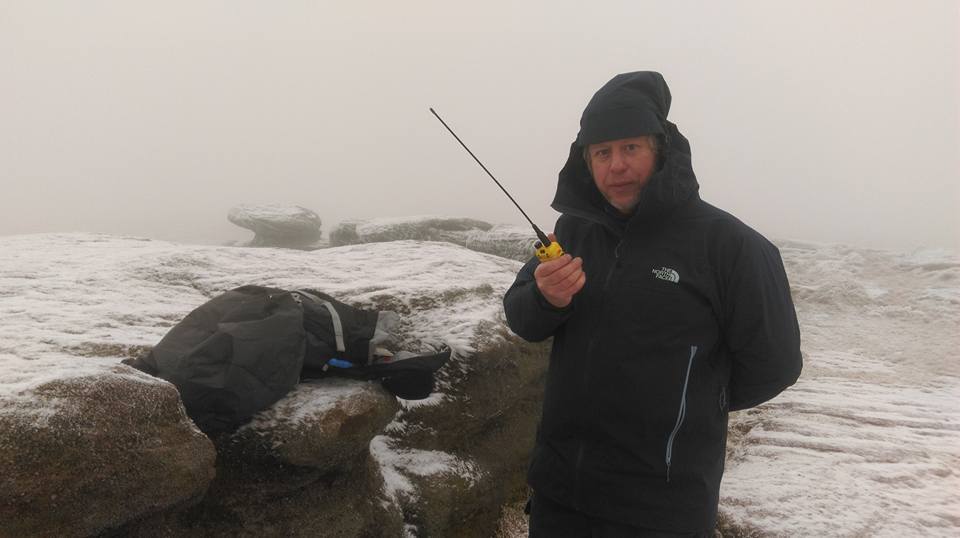 The radio was good fun once it got going. I enjoyed good little runs of QSOs on 80 CW and 80m SSB. Meanwhile, I spotted someone in the clag that looked like they might be talking into a handheld. As I earwigged, I could tell that the person coming back was a radio amateur. I switched on my VX7R to eavesdrop further, and indeed, it was another SOTA activation, taking place about ten metres away! 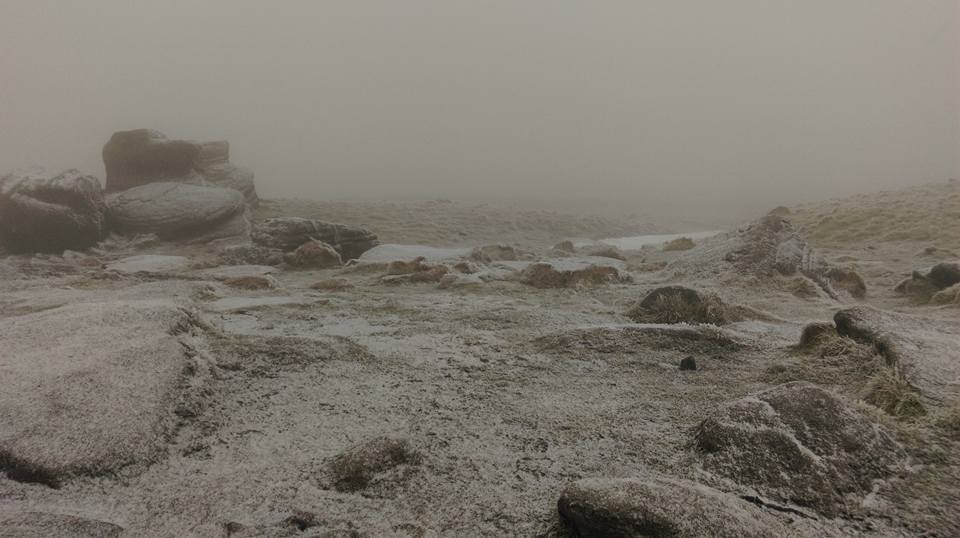 I went across to introduce myself, and it was 2E0KUK - and yet another Andy! Returning to do a bit more operating, I found a good level of demand for me on 40m CW, and some interest on 40m SSB too. 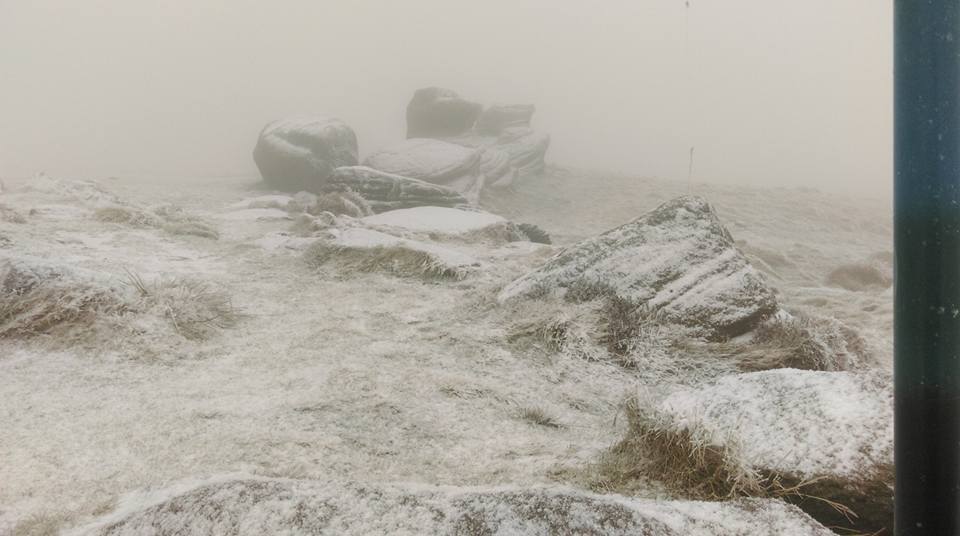 The activation stats were: 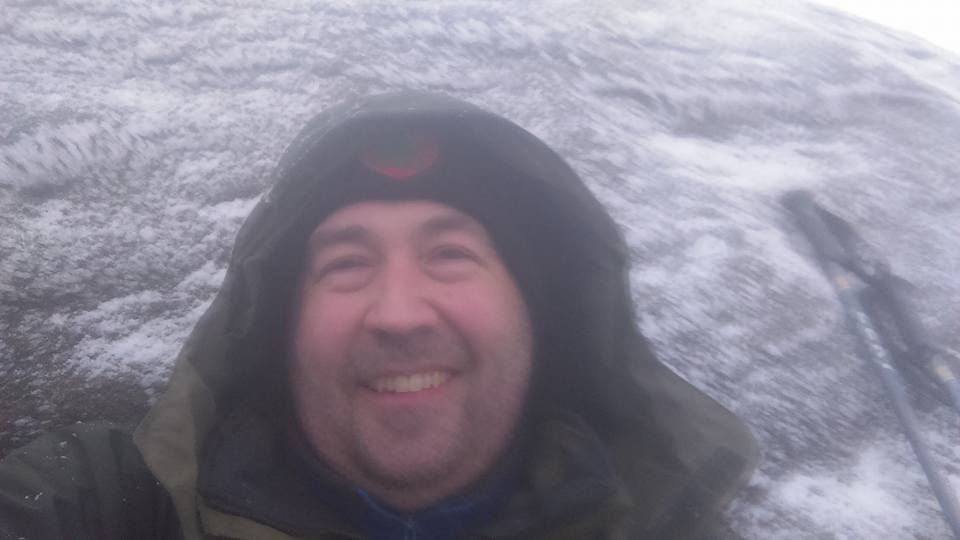 After 80 minutes of operating, I started to feel rather cold. I took the decision to pack up and get walking. The return walk was not quite so trivial, for now the light snow had settled on the flags making them very slippery. It was still much easier and faster than the pre-path days though! 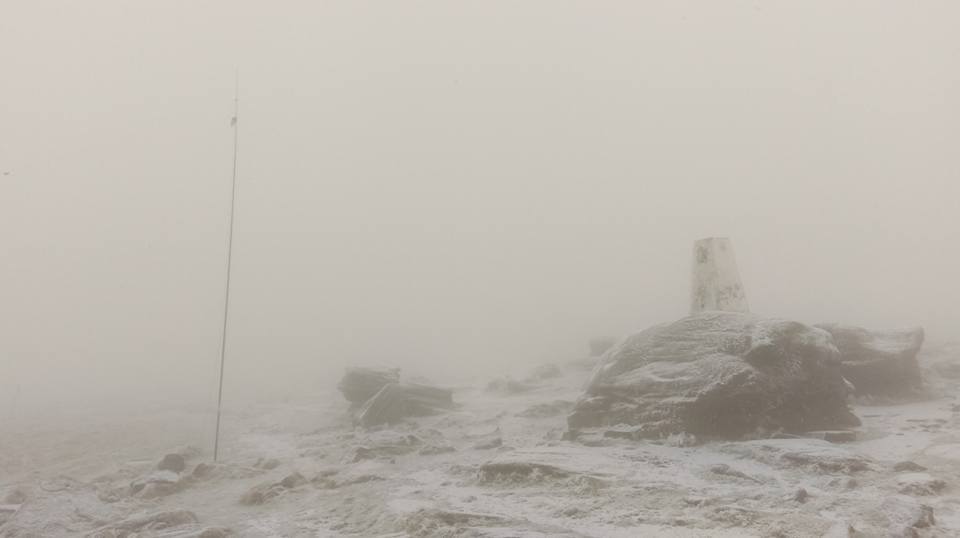 I fancied a pint so grabbed one in the Shoulder of Mutton in Chapel-en-le-Frith to break up the drive back. I also relieved the quiz machine in there of a few quid, sufficient to cover the cost of my pint of Robinson’s Trooper Ale anyway! 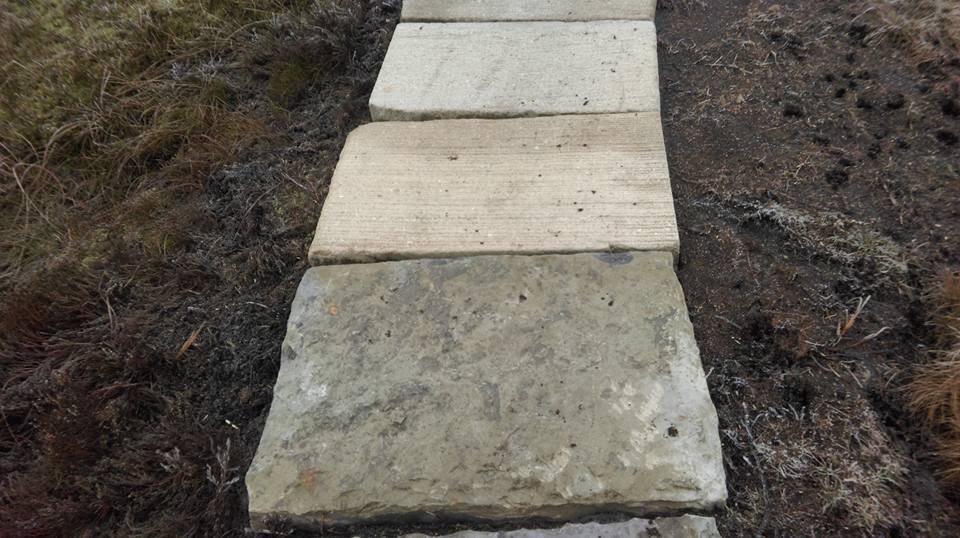 So for this walk, I started at 420m ASL, finishing around 5km NNW at 633m. With easy underfoot conditions facilitated by the new path, this is now a fast and easy way to access the summit area of G/SP-001.

Can you pop in a map reference of your parking spot into your report so that I can put it into my SatNav in preparation for an activation of this one later in the year. Thanks.

Much appreciated Tom…on the ‘on the to do list’ . Thanks for all the reports on your website…I use it quite often as a reference. Speak soon. Regards Allan

I’m going to have to do some arithmetic - my OS map only does the NG and DMS!

Use Streetmap on line to see where it is.
73,
Rod

If you type in 53.3388. -1.8643 into Google Maps it comes up with the parking spot on Sheffield Road and just before the junction with Rushup Lane and the beginning of the path. Hope you are keping well. 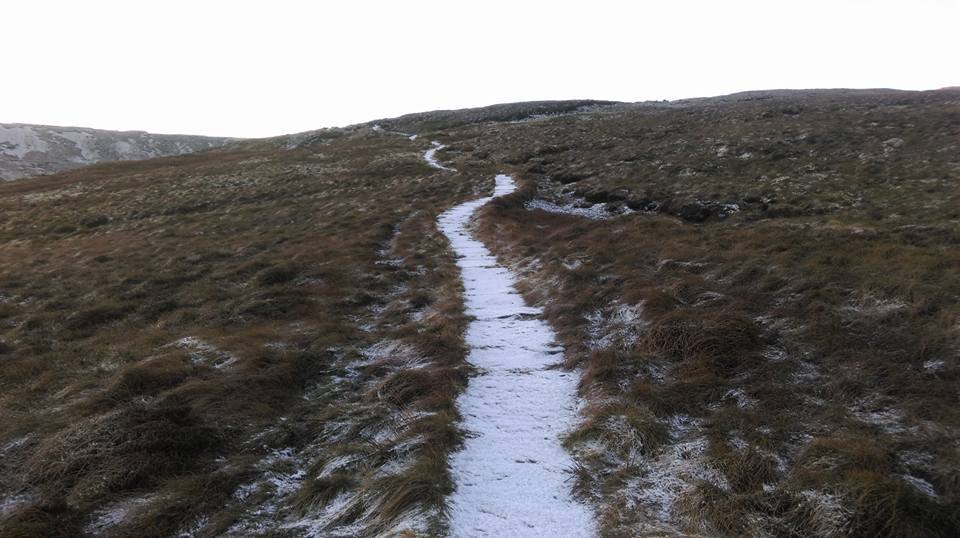 Well how about that? Today, Sunday 29th January 2017, I did an activation of Black Hill G/SP-002, the next SOTA summit north on the Pennine Way after Kinder Scout G/SP-001. Today, Sunday 29th January 2017, the excellent Countryfile programme on BBC1 had photos of the trig point on Black Hill’s summit (known as “Soldier’s Lump”) in its first item! The piece was about the ongoing work to reintroduce sphagnum mosses on the naked peat and other reparation efforts by the Moors For The Future team, referenced further up this thread! 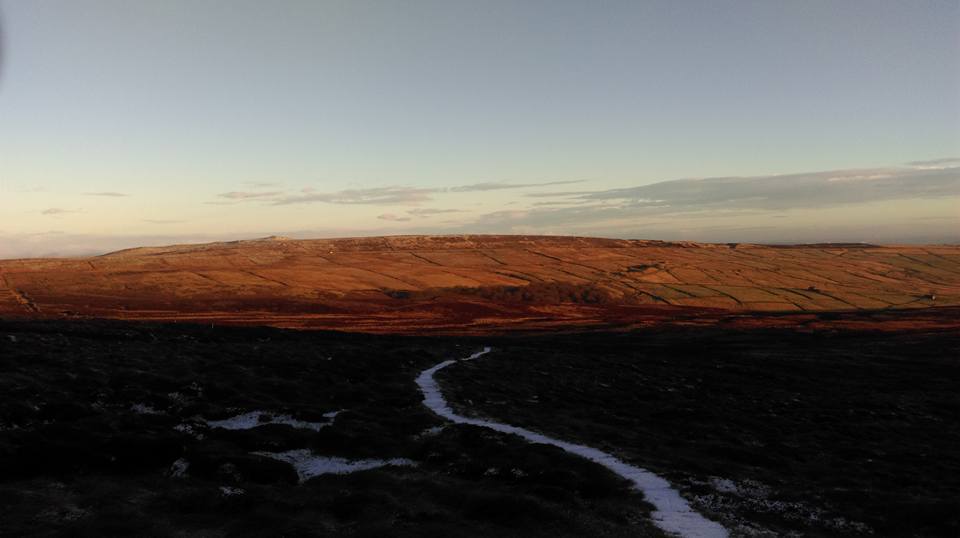 It was very cold when I left the house around 6am. The ice on my windscreen was stubborn and took some shifting, and already I was glad that I had a large bowl of warm porridge inside me! There was a lot of ice on the roads too, so I took it really steady up to the M60 and A635 to the parking spot opposite the Pennine Way sign and gate. 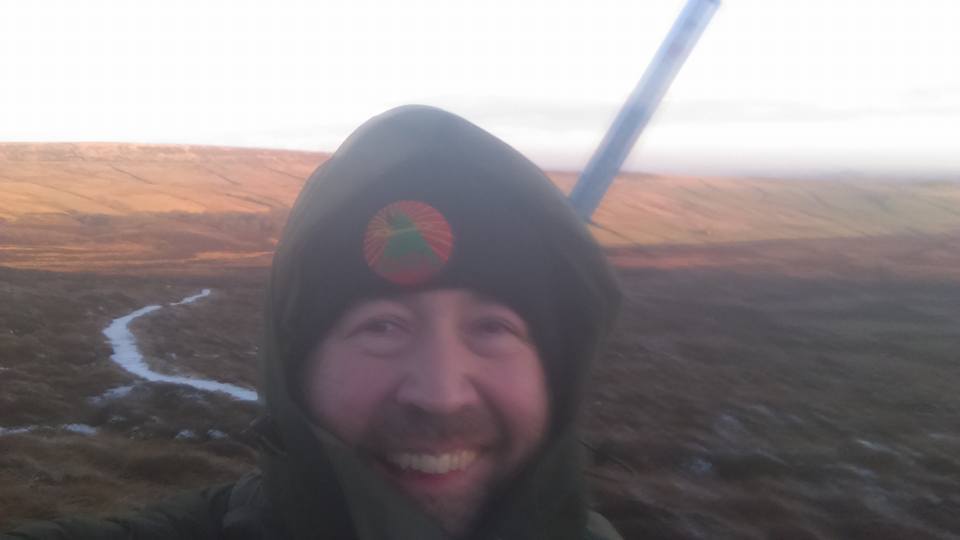 The ice continued to be a problem, coating the flagstones of the path and making them unusable, so treacherous were they. So my footsteps had to be chosen carefully either side of the path, or occasionally, gingerly and cautiously, on the path. This made for a slow walk to mirror the slow drive! 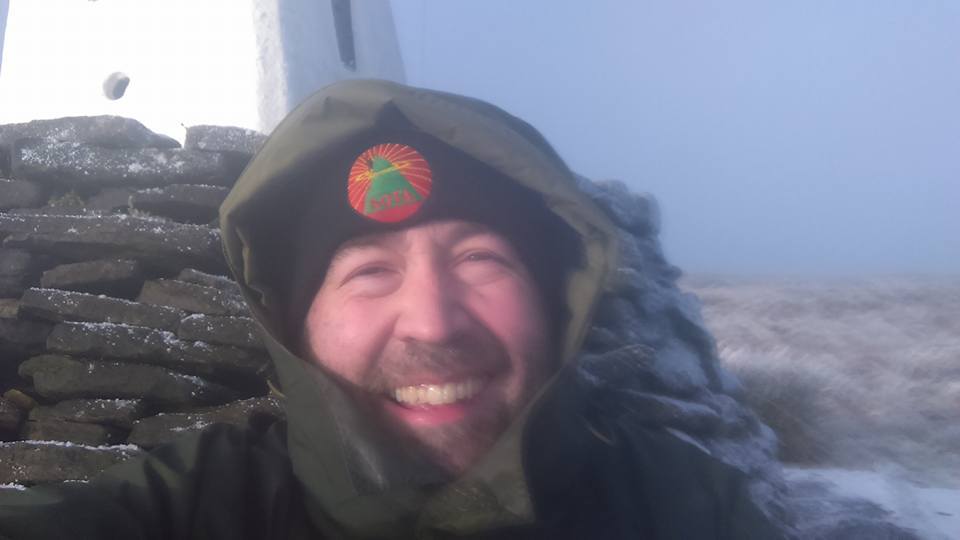 Visually, it was lovely though. Wall to wall blue sky, bright early morning sunshine, and a light coating of snow, frozen hard overnight and crusting the landscape. It took me over an hour to reach the summit at Soldier’s Lump, and the slow pace continued as I set up the SOTAbeams Bandhopper 4 antenna. The flagstones were like an ice rink, but the bogs beside the path could easily be entered through the thin crust of ice! 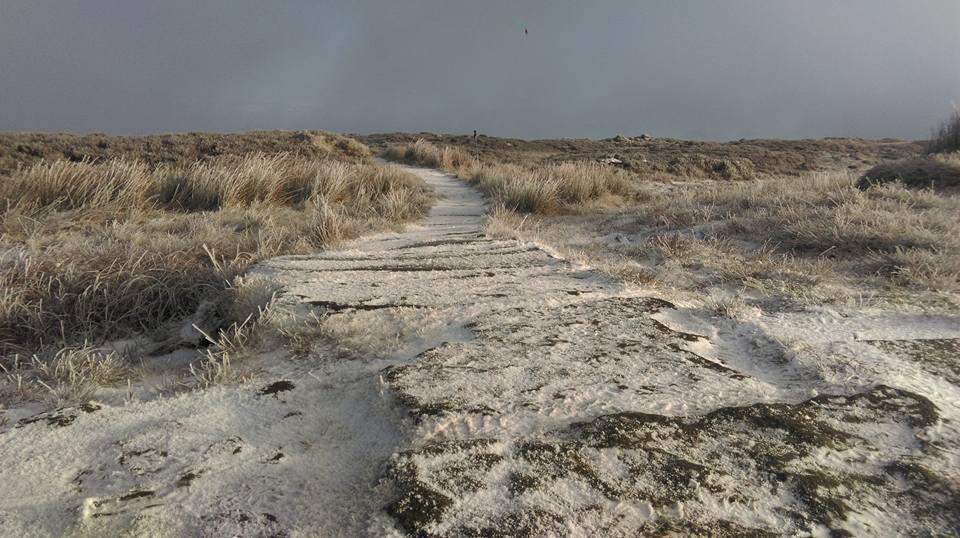 I started again on 80m, but just 5 QSOs were made, 2 on CW and 3 on SSB. I switched to 40m, but found a contest in full swing and no chance of holding a frequency. That was fine - back to my feet and opened the next pair of links on the BH4. So now it would be the contest-free 30m band. No more SSB for the non-CW chasers unfortunately, but 30m was now the only viable option to continue. 18 QSOs were added to the log, but unusually, no S2S on this occasion. 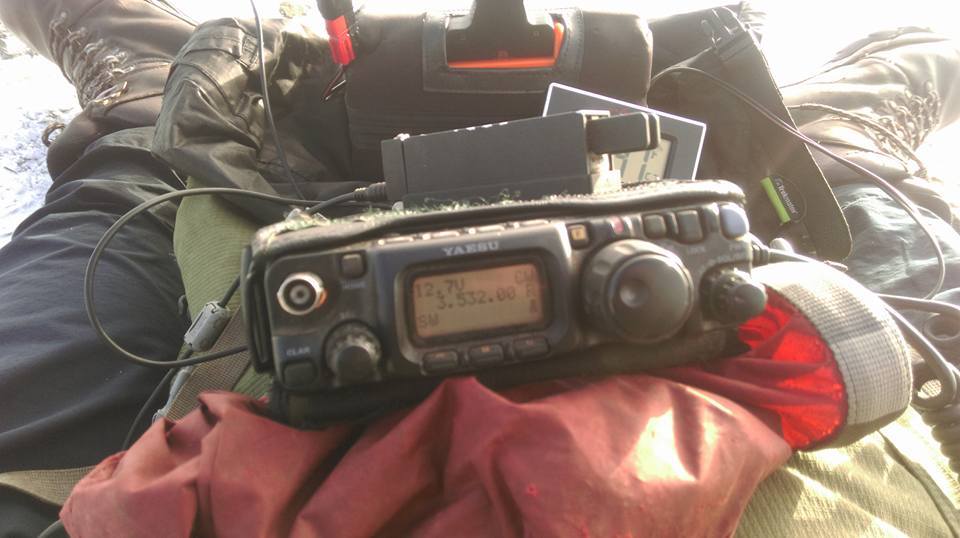 After packing everything away, I called for a few minutes on 2m FM using the handheld, but there were no takers. I wasn’t too sorry to be putting my aching hands away in padded gloves! I hoped that the return walk would reveal the disappearance of much of the ice with the temperature hovering just above freezing. However, it was not to be, and yet another slow and careful walk was in order. 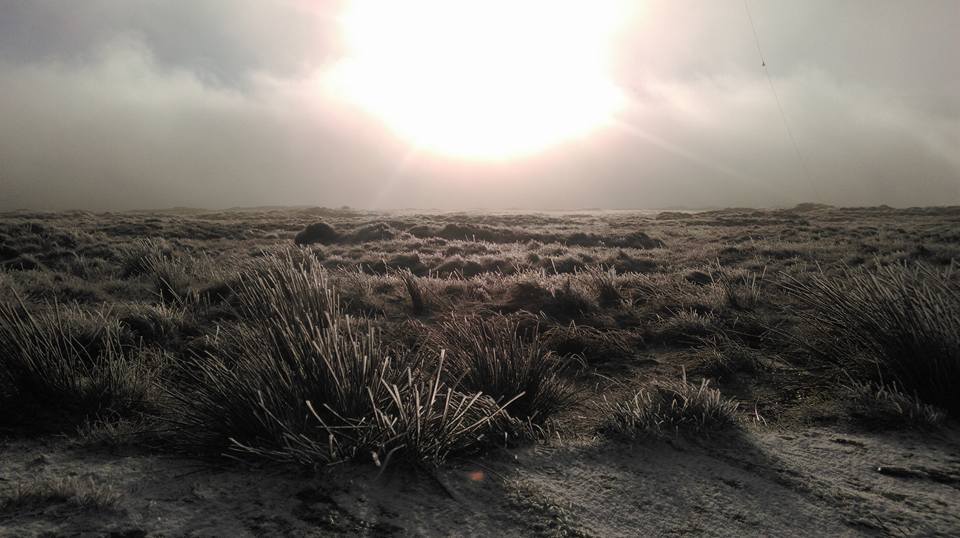 At least the roads were by now much improved, and I was home in good time to enjoy a magnificent Sunday roast lunch prepared by Marianne. The visit of my little goddaughter made for a fantastic afternoon and the reassurance that, after all these years, I am still brilliant at hide-and-seek. 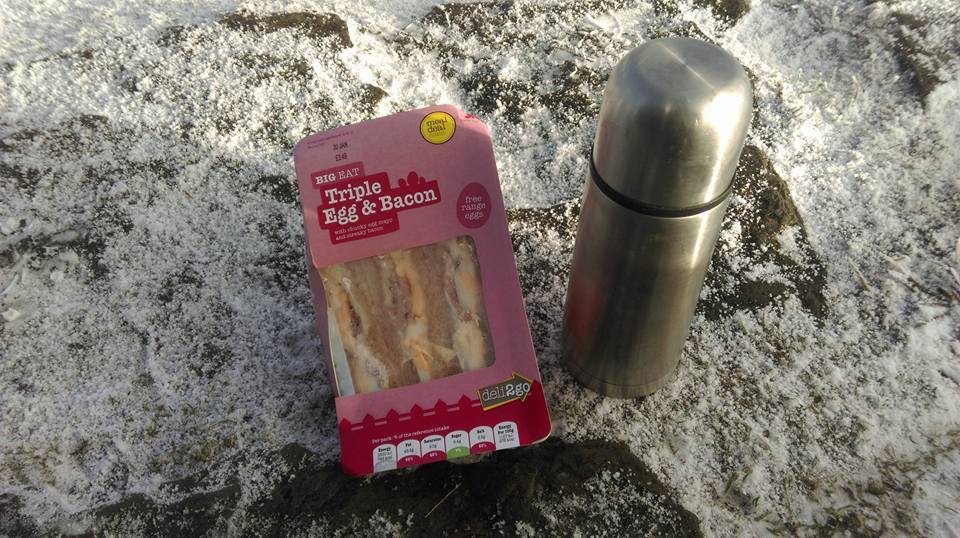