The weather had been looking good all week for Saturday the 16th, so I emailed Karl OE6LKG and asked him if he wanted to go to the Rotewand. The answer was affirmative, so I picked him up at 07:30 and we headed off to Teichalm. There has been a seriuos thaw on for a couple of weeks now and the roads are all clear of snow; it’s nice not having to wash the car every 5 minutes. The way to the Rotewand is also very easy at the moment. First thing in the morning, the snow was crisp and well consolidated; a far cry from flogging up Osser knee deep in snow two weeks ago. In fact, once on the main ridge, the path was largely snow free: 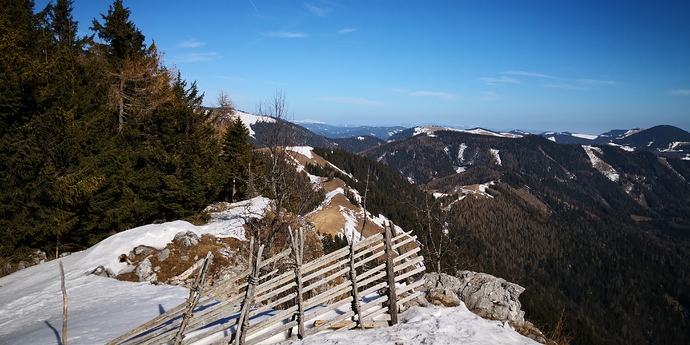 We used a SOTABEAMS 4 band linked dipole and Karl’s FT-817 / 50w PA combo, mainly because I wanted to try 80m. Karl went first and took 20m, as there is not such a big pile up on the upper bands: 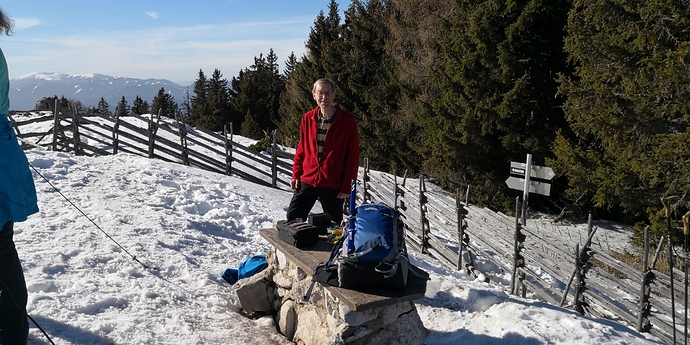 He got 6 contacts: 4 from the UK and 2 from Spain, which delighted him immensely. I must say, his sending has improved quite a bit since last year. His Palm Paddle Mini Single also helps him a great deal (he has the Pico Single and Pico Paddle at home too, and no, he’s not selling). I tried 80m first, but only got 2 local contacts. Well, it was the middle of the day. I then retuned to 40m and got the usual steady stream of contacts; thank you chasers. There was virtually no wind at the summit, and we were very warm while we activated. I was in shirt sleeves almost the whole time. The view was fantastic as ever:

The next few days will be perfect for activating many summits in the south Steiermark. I’m probably going to Weinebene tomorrow to do a double activation there. I have some new ski skins which I trimmed on Wednesday, so I’m all set to go. The weather at the moment is a real treat for the middle of February.
73 de OE6FEG
Matt