Wow! The new SOTABeams 2m filter is awesome! Tested it on Squawk Mountain today. With the squelch open, S-8 noise without the filter, completely eliminated with the filter installed. Well worth the $60

I also have been able to try out the new SOTABeam 2m filter after a surprise visit from Santa Claus (the package wasn’t much bigger than a matchbox and I had no idea what was enclosed). On 29 December we were due to visit the Horseshoe Pass above Langollen GW/NW-042 and 43 so I knew I would be ble to try it out on the latter as Cyrn y Brain and the masts are notorious. I use a Yaesu VX7R handy, which is wide open to any interference that is around, with a dual band dipole about 2m above the ground and have had to use the M0JLA homebrew helical filter to hear anything at all on 2m fm.

The wind was blowing as usual so I hid behind the sheepfold and tried calling without the filter (explaining that i was not expecting to hear any replies) and heard nothing in reply or on any of the 145 frequencies. I then asked any listeners to QSY to 70cm and talk to me there. I received 7 immediate 70cm contacts with most of them telling me they had replied on 2m! Hence I screwed in the new little filter and tried again - magic! 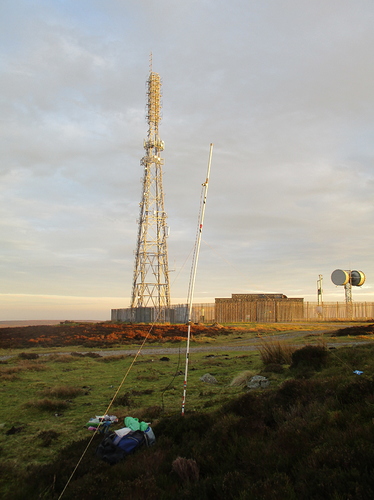 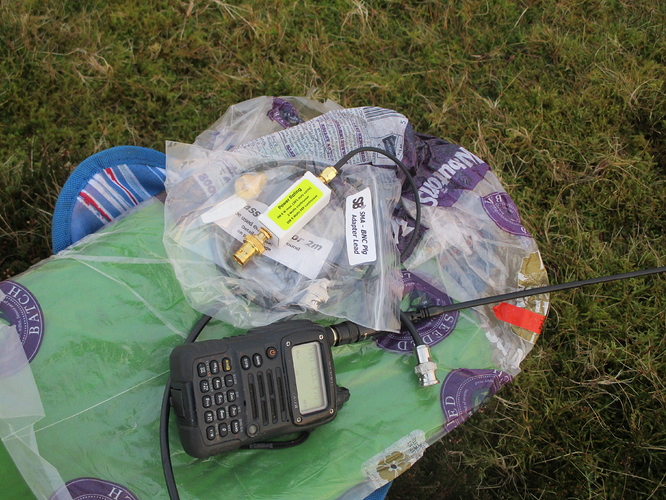 IMG_0960.JPG3643×2732 2.45 MB
As I trawled round the band the signal meter came alive and I could hear voices!! Nine 2m contacts were soon in the bag - along with another 3 at 70cm (Richard is right - it doesn’t work on 70cm… or rather it DOES but so efficiently that none of the signals get through!) and it was time to go down to the car and continue the drive to Snowdonia. 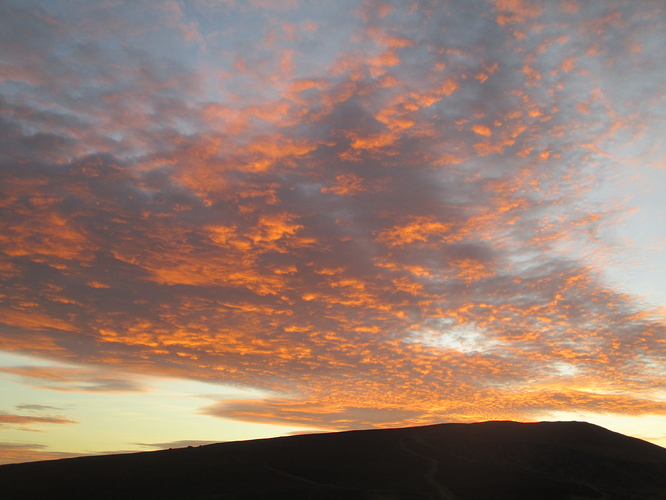 I was delighted and decided to keep the filter permanently in my kit so I didn’t get caught out anywhere else. My previous helical filter was a bit heavy and so only got carried when I needed it (and remembered). Thus on 10 January, back in my usual Welsh Borders haunts, we went up GW/WB-002, Brown Clee Hill and I looked for my usual spot down in the ramparts of this border fort where i got some protection from both the wind and the rather powerful masts perched on the top. 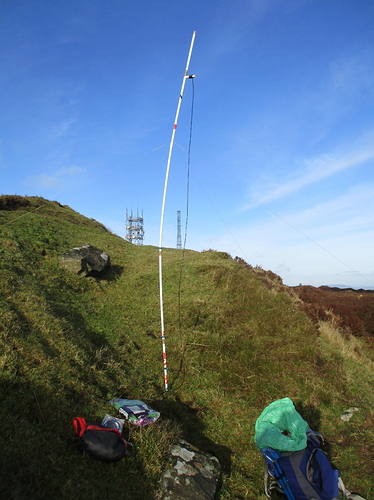 We managed a s2s with both Moel Famau and Moel y Gamelin (GW/NW044 and 042 respecitively) on the stick aerial before settling down but the trouble always increases when the dipole is attached. In went the filter and I started calling and got 16 replies on 2m (and 6 on 70cm) which sound very good BUT it was not easy as, I regret to say, I was still getting some interference from the masts (presumably) despite the filter. We would be chatting away and then suddenly the audio disappeared and returned some many seconds later. This happened increasingly often but It was sufficiently sporadic to just mean I had to ask people to repeat some comments but could complete all the contacts. However this was a disappointment after the fabulous results on the first hill. I hadn’t carried the helical filter up as well so couldn’t make any comparison. I do have to reiterate that the VX7R is reckoned to be one of the worst possible radios for dealing with interference. 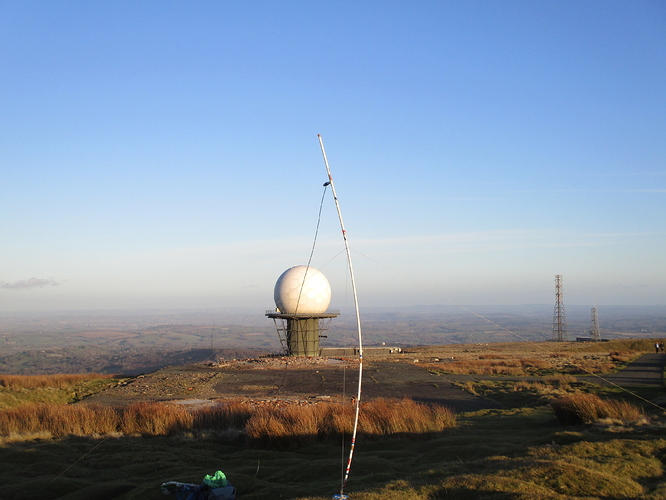 IMG_1053.JPG3643×2732 1.66 MB
where I sat as near the various masts as possible to check the filter again. Here I was mostly successful but was told that my signal was fluctuating at times. I was warned by G6NHW in Birmingham that my signal report was 57 until I inserted the filter when it went down to 43 but I was still receiving 59 reports from Telford and Newent but these are fairly close. I will have to investigate further and more reports will follow I’m sure! It is definitely a thumbs up from me and it will live in my kit – but possibly not quite perfect with my radio.

Great report! I used the SOTAbeams 2m-FM bandpass filter again today on another local summit where I’ve struggled on past Activations - again, the SOTAbeams really impressed me! S-8 noise without the filter, and S-0 with it. Made the Activation so much more fun and no frustration!

These reports are very encouraging. It seems the bandpass filter is able to cut out all the local signals from broadcasting and pager services; once that is done the radio performs perfectly well. A filter that revives the 2m radio and makes it useful is quite a handy accessory. I would put one in my kit too if I needed one.

I’m interested to know how well the radios perform with the filter in line with a more effective antenna than the small stubby helical usually supplied as the standard with HTs. Has anyone tried using their previously blocked radio with a filter plus a longer antenna, like a simple quarter wave, or a more efficient half or five-eighth wave antenna? The results would be interesting to many, I think.
Andrew VK1DA/VK2UH

Has anyone tried using their previously blocked radio with a filter plus a longer antenna, like a simple quarter wave, or a more efficient half or five-eighth wave antenna? The results would be interesting to many, I think

as Cyrn y Brain and the masts are notorious

Yet up to 2000, it was an RF quiet site. You could run big arrays on 2m with preamps and have no problems. The only problem we had contesting was the 70cms preamp, it needed a stub on its input to cut out R3 from the BBC FM transmitter. Without that it was useless.

Good to know there is a fix available for people without metal work skills.

Good to know there is a fix available for people without metal work skills.

Are you suggesting I could carry up an angle grinder and topple the masts before activating?? I’d need a larger rucksack (and a new engine!)

I took the two meter slim jim up to ZL3/CB-822 which is a site reknown locally for its RF soup & great difficulty on the rubber duck. Wow!! What a difference & I was right next to the multi array antenna masts which is something unheard of especially with the 70DR but the 270D out performed everything

I used one of these on Clee Hill G/CE-001 yesterday. Failed activation unfortunately, but the first time I have been able to use an HT on this summit without interference from the neighbouring masts. A good investment I think. (2m bands seemed very quite yesterday - even without filter. I checked!)

They all have big stuff on the summits.
73,
Rod

Glad to hear the filter is working well Tim. Should be required kit for anyone doing the Tiger’s, Squak, etc. I’ve been on both ends of those awkward activations where there are dozens of people calling but you just can’t hear them due to RF overloading the rig!

Are you suggesting I could carry up an angle grinder and topple the masts before activating?? I’d need a larger rucksack (and a new engine!)

Andy was merely pointing out that not everyone carries a lucky anvil like him and can therefore fashion a 2m cavity filter whilst on a summit.

So does that feeder run down the outside of the PVC pipe only a few inches/cm/millicubits from the lower half of the antenna?

You can see it best on the large radome - the feeder emerges from the coil on the T-piece centre of the dipole and crosses in front of the radome. In the other pictures it hangs a bit close to the lower half of the dipole - it ought to matter but does not seem to.

I usually only remember take a picture after I’ve gone QRT and disconnected the radio from the feeder which then hangs closer.to the mast than it was before. When I’m using the radio, I’m usually at least 2 feet from the bottom of the mast horizontally and possibly more vertically - so the feeder still hangs more vertical (and parallel to the mast) than it ought to but I am very constrained by the terrain. This was especially true in the 2nd to last picture where I am in a narrow rampart (groove) in the battlements of an ancient hill fort and I have to sit (cushion can be seen on the left) and take the picture further down the groove so the feeder is actually in front of the mast rather than almost touching it - hence it is slightly further away than it looks but NOT at the text book right angle to it that it should be. You might also notice that the dipole is not exacly vertical in any of the pictures - my excuses are: wind was blowing, difficulty in finding places to peg (expecially in rock), there is a warped bamboo cane hidden in one of the pipes to assist rigidity and, most importantly, I’m getting cold/late whilst I’m erecting this and what does it matter if it actually works…

I have the same problem with photos - sometimes only remember to take them after everything is packed up. One of the things I’m packing is the camera and that reminds me! GAAH! No photos!

Re the position of the feeder, that’s all good, but I think there is going to be a lot of coupling from the lower half of the antenna to the outer of the coax cable. The choke should perhaps be below the lower end of the dipole.

The coaxial dipole (“flower pot”) is a neat way to avoid all that. Less wind resistance and a simpler physical setup.

But back to the qrm and blocking of the receiver. I don’t think any feedline pickup problems would invalidate the filter on the inside of the feedline, but maybe RF (including the interfering/blocking signals) on the outside of the cable can cause some issues in the radio. The filter doesn’t isolate the outside of the coax from input to output, does it? How about trying another RF choke, 9 turns of RG58 on a 25mm former, above the filter?

Hope this is food for experiments.

Thanks for the advice Andrew - I’ll have to think about this and do some tests. Possibly the problem has got worse as we replaced the coax fairly recently and made it longer so I could perch the dipole higher while I cowered further down the slope - probably with the coax almost vertical and thus quite close to the dipole!! Must look out for this and see what I can do - even when there isn’t a mast looming over me.