Ladies and Gentlemen, it is time to call it a day and retire from SOTA. No, not me but my 5m fishing pole!

It was probably sometime around 2002-2004 that the fibreglass fishing rods appeared as very cheap antenna supports. They may have been available earlier but that’s when there suddenly seemed to be lots of them in the radio press. Anyway my chum Brian G4ZRP bought 3x 5m poles from a garden shop on the way from a rally. I picked it up mine when I next went back down to England. They were Shakespeare 5M poles (5 section) and cost the princely sum of £5 each.

Mine saw little use till my SOTAing started in October 2006 and since then it has been the pole of choice for my activations. It is light and strong. In my case it has only supported 2m/70cms Yagis on a handful of occasions, most of the time it has supported wire dipoles or verticals for HF. It has been brilliant at that role. Even when it started to look tired and it collapsed all the time, simply dismantling and carefully cleaning the joints resulted in a complete fix.

So why retire it? Well yesterday I noticed that the bottom (large) section has developed some fine cracks where the next section would fit tight. End-on, the top of the bottom section now looks oval. A well appiled layer or two of duct tape would fix her up for possibly for more activations. How many more? Well at least one and maybe a hundred. However, should it fail at these cracks then it would be catastrophic. So I think it is time to retire this pole from full time service as I think I have had my money’s worth with it costing about 1p per activation!

So this Shakespeare pole will now enter the “Sunny Summits Home for Retired SOTA Poles” and my reserve pole will be promoted. It will be a pseudo retirement as I will fix it and take it as a spare until I buy another 5m pole, only then will it sit in a cupboard.

I could find another of these Shakespeare poles then I’d buy it at once.

So does anyone have a trusty SOTA pole that has anything near 500 activations?

Phew… gave me an initial shock. A short message from our database maestro entitled “Retirement from SOTA” near year end I feared the worst. That was until I opened the message and saw that your old fishing pole was kaput. I’ve been through several in my SOTA career which started in 2005. One snapped at a mid point in the Isle of Man when supporting a “too highly tensioned” 80m dipole - I gave up on 80m SOTA at that point, and like you moved over to the shorter travel poles which fit inside a rucksack which I have taken on several flights like that, without being stopped. I get them from Lifes a breeze and I believe they aren’t available anywhere else. Not the cheapest, and as well as being travel sized they stop the fell walking public and gamekeepers and the like asking questions because as they meet you they cannot see what you are carrying. No problem with low tree branches either as you will also have found… thanks for yesterdays 5 MHz QSO fromTinto.

Good going that Andy. Mine manage tend to manage around 200 activations each on average (some considerably more, some rather less), but I do subject them to some “interesting” weather situations!

My original 7m pole from SOTAbeams is still going strong, don’t know how long I’ve had it but certainly over 10 years. I bought another similar pole so that I could run phased verticals.

I’m still on my first pair of boots, purchased in 2004, a couple of months after I started with SOTA. Certainly had my money’s worth out of these Scarpa SL M3s! 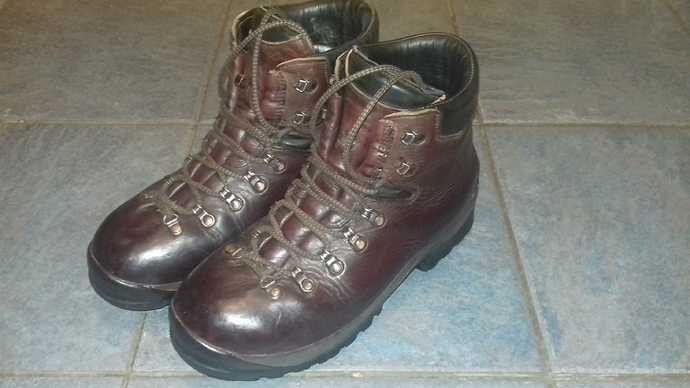 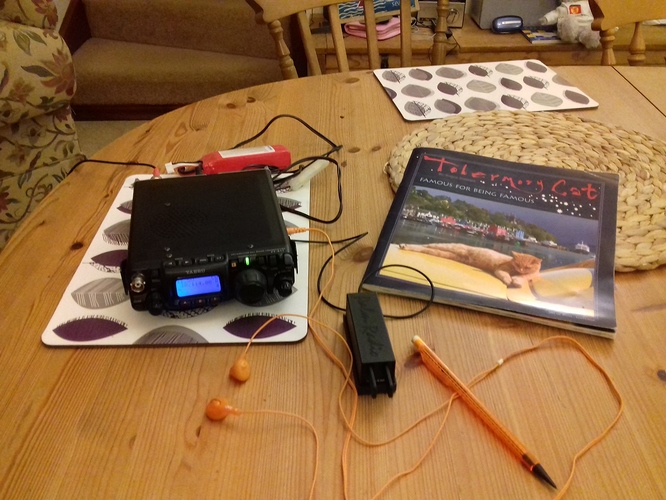 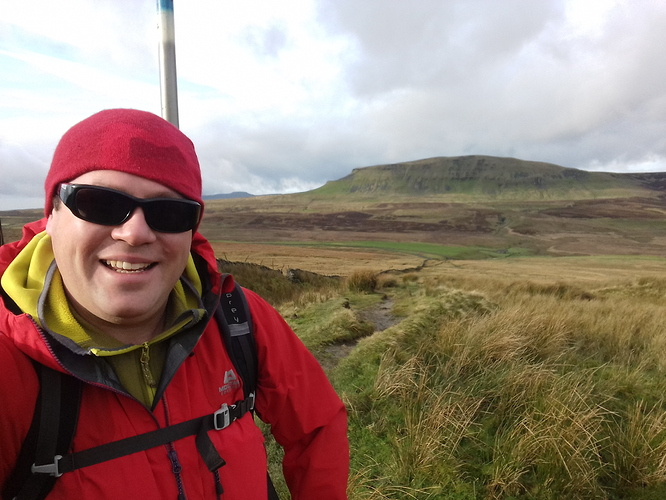 I have also managed to kill off two Garmin Gekos, not sure how, they led sheltered lives! My XYL’s mother part funded a replacement Garmin Etrex this Christmas, fingers crossed for a longer service life! 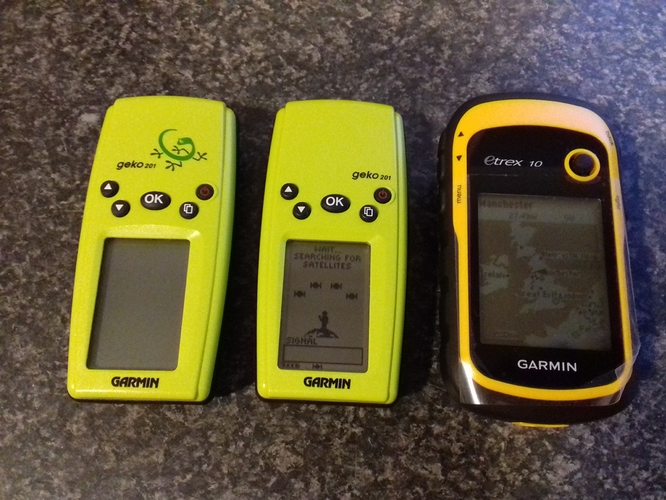 I’ve had one of those for about 200 activations. It did split once at the top end of a mid section when I foolishly raised it quickly into a strong wind.
I repaired it with a length of heat shrink sleeving extending to a couple of centimetres below the end of the split, which has lasted well, and is thin enough to allow the repaired section to telescope as before. Apply the heat slowly, and stop when it reaches the size that you need. Otherwise it will crush the pole, and you’ll have to cut it off and start again. I expect. cough.

Like Phil, I’m relieved to find that the title refered to your fishing pole

Those boots show that regular cleaning, proofing, polishing and waxing will prolong boot life. I invested 15p in an ASDA bargain nylon pan brush in 2008 and it was ideal at removing wet and dry mud etc. from boots. It wont damage the Teflon non-stick coating on a pan (how do they make non-stick coatings stick?) so is fine on leather boots. It’s just expired from UV exposure and the replacement was 38p from Wilko!

Waxing also treats the stitching in boots which is essential for people in the UK where peat/bog/moorland water is quite acidic and will rot natural threads. I’m using Grainger’s Wax which is half the price of Meindl’s SportWax and is the same stuff in a different tin.

Yep, but doesn’t stop you wearing the soles out… I tend to find that by the time the sole is worn down so it is no longer gripping well it is also about the time the uppers start to fail and let in water.

Two to three years for my boots.

As for SOTA Poles… it’s the luck of the draw… I’ve broke three in 6 years, all in awful weather.

True. I should have said “regular cleaning, proofing… … will prolong upper boot life.”

My boots have lasted about the same as Geralds over the past 10 years - around 2 years a pair, never more than 3, but I don’t just walk for SOTA. In 12 years I have had all leather ones only - Altberg (2), Scarpa (3), Meindl (1), Go Outdoors Event (1) - comfy and the most comfortable I’ve had but sadly no longer available and Mammut (1). Some swear by them but the Meindl with leather lining and memory foam were dreadful for me. Leaked in within 3 months sent back to have the sole glued, leaking again within a month and then used for gardening. They weren’t cheap either. Usually have two pairs on the go at once depending on condx - bog and terrain, winter/summer I choose the most appropriate pair. I don’t keep track of mileages until they are knackered, but Ramblers I know do. They reckon around 1500 miles walked and the soles are getting shot and no use in winter anymore. The Mammuts I have are 3 years old and are a 4 season boot with a very stiff sole. Tough as old boots as they say, but not the most comfy unlike the Scarpa Rangers which are light with a much more flexible sole. I still have the Go Outdoors Tower Event boots bought in Penrith 3 years ago (£80) but will only wear them now when a dryish walk is expected as the welt between the sole and the upper has started to let in. I clean the boots if dirty after every walk, scrubbing if necessary, and just use Dark Tan Kiwi Parade Gloss Polish, so I and the XYL usually have the shineast cleanest boots in the group. I have used Leder Gris in the past - a wax, but don’t bother nowadays. I’m not a fan of the Nikwax product sold for waterproofing footwear as I like a shiny boot, at least at the start of the walk!

Some swear by them but the Meindl with leather lining and memory foam were dreadful for me.

I’ve had 6 pairs of Meindl over the last 12 to 15 years. All great. Must have been unlucky.

The soles on my Scarpa SLs are still good, I’m light on my feet and these boots have seen a lot of action on ice and snow.

Of course I’d love a new pair of B1 or B2 boots but with the prices starting with at least a ‘2’ I’m not about to invest any time soon!

I went to the Craven Radio Amateur Group (CRAG) meeting yesterday evening. I was aware that Geoff G4CPA had received a shiny new Yaesu FT-25 from the rotund bloke in the red suit. I thought I’d dig out my handy talky and take it along just for fun. 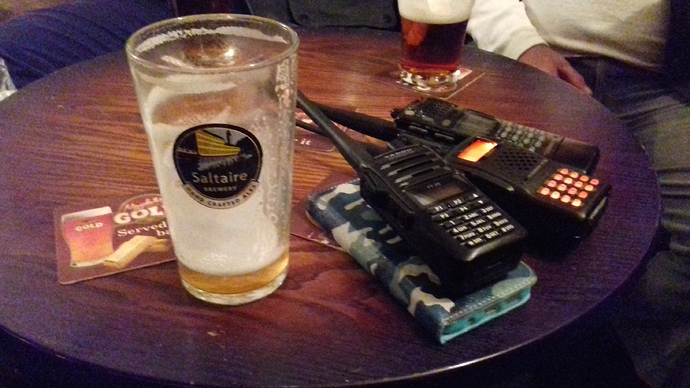 It’s just occurred to me that I used to use the Alinco DJ-G5 for SOTA when I first started in 2004. I distinctly remember activating Helvellyn G/LD-003 using the rig and being amazed at the distances of QSOs.

The radio is about 20 years old and still works with the original NiCd battery packs! 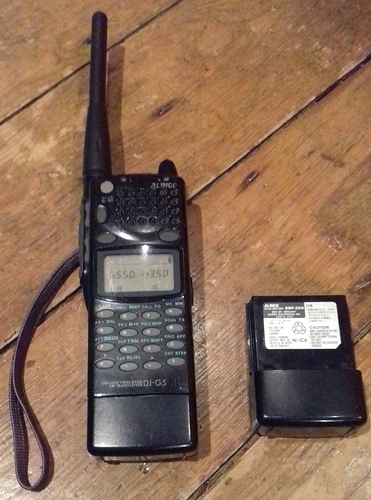 Lets see some photos of this retired pole! How does she look after 500? 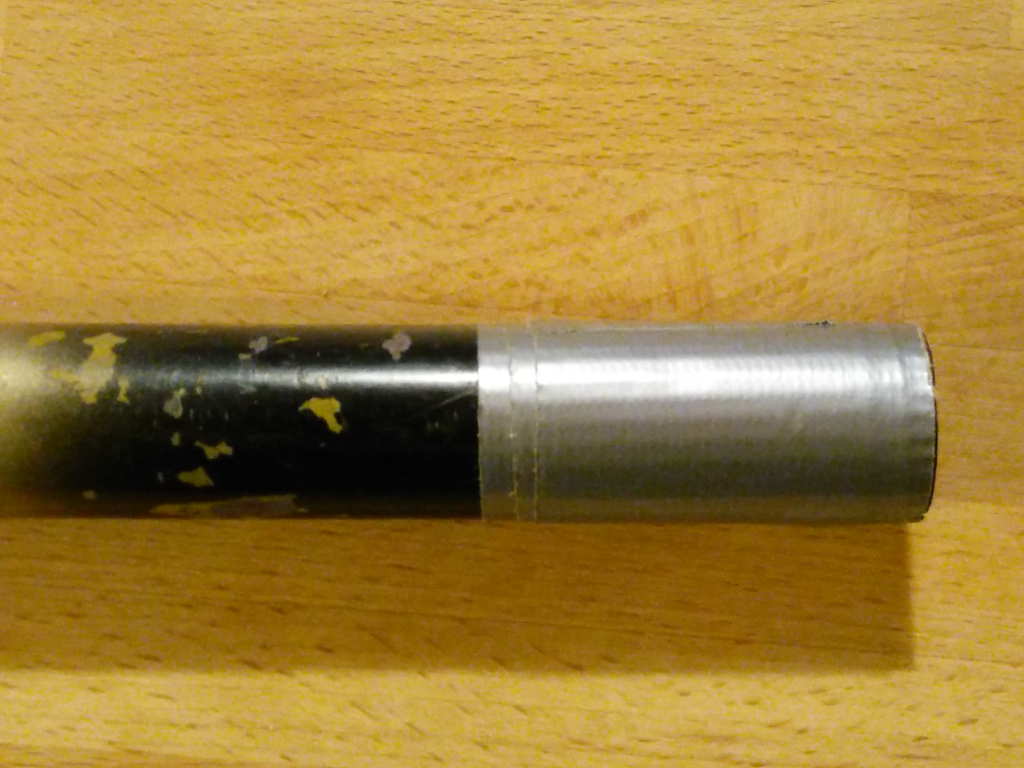 The bottom foot. This is significantly heavier in build than all my other poles. Most are a two part plastic construction with a rubber disc held over the bottom to contain the elements. This has a solid thick plastic disc with attached thread and the thread is about twice as long as normal. 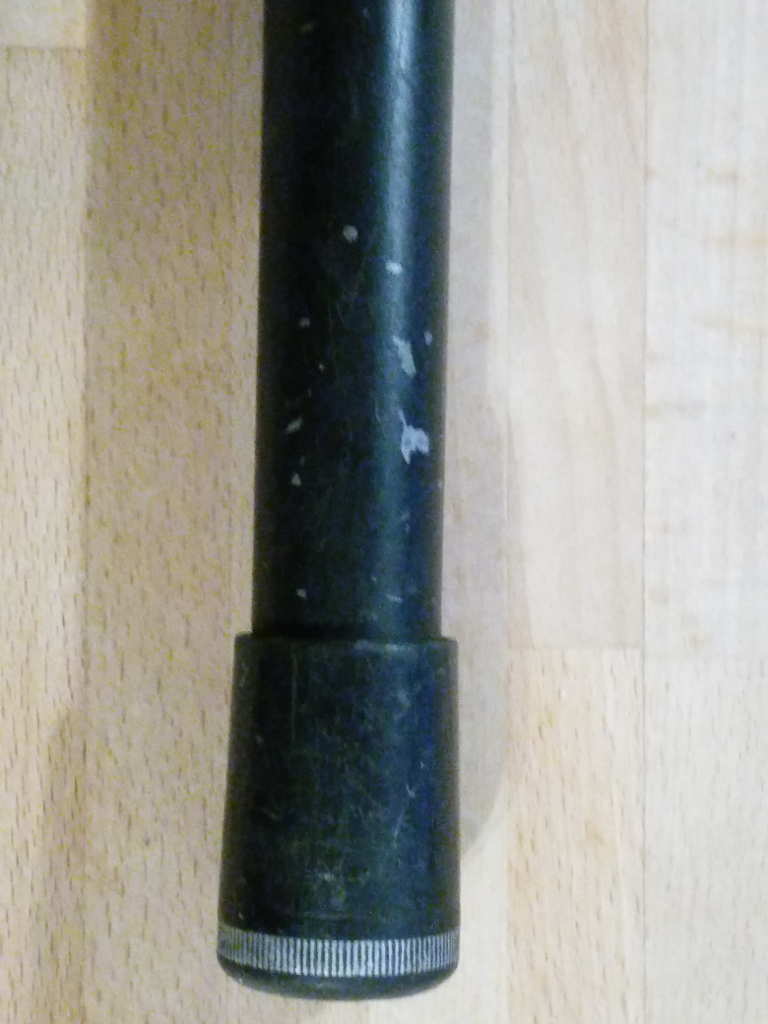 The bottom section. The red marks show where there are chips and cracks in the material. 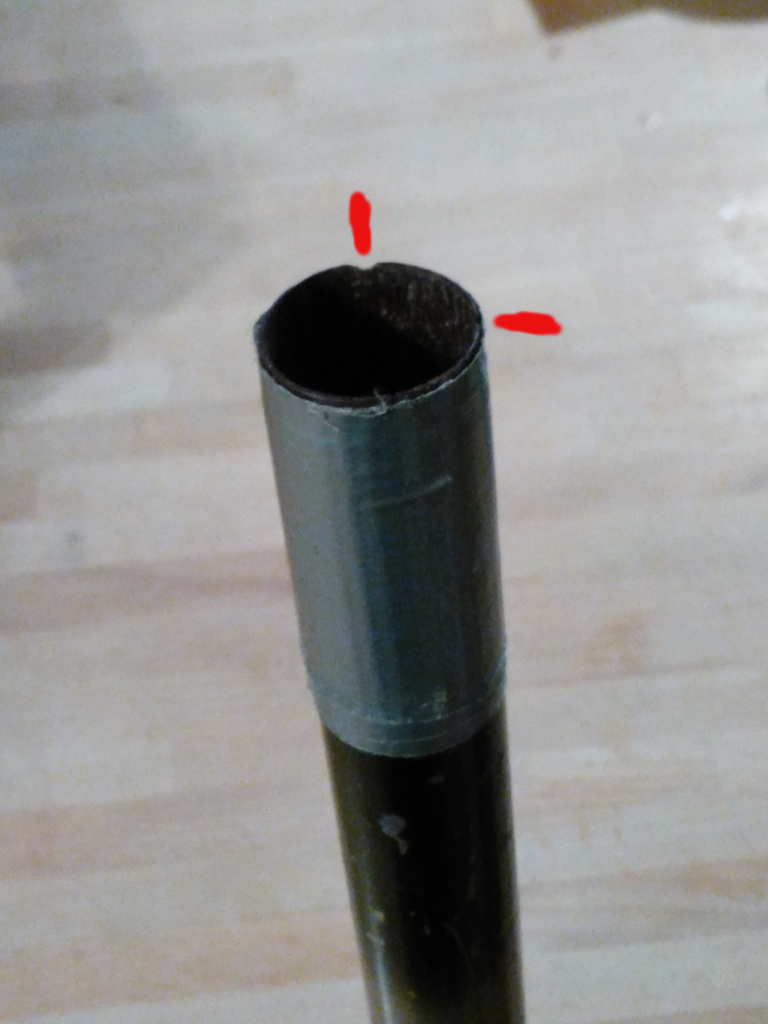 The top cap was lost by the time I reached the summit of Monamenach GM/ES-028 in June 2011 and found on the path on the return walk. By Spetember 2013 on Meall Alvie GM/ES-055 I had lost it completely. I remember because I got the pole jammed solid on Meall Alvie and couldn’t separate the sections then it started raining.

Overall, a very well put together pole which is why I’d like another.

My SOTA Skoda Yeti retires in the next week or so. Waiting on the delivery of my next SOTA 4x4.

Andy, I have a unbeatable record!

Number of completed activations before failure: 0 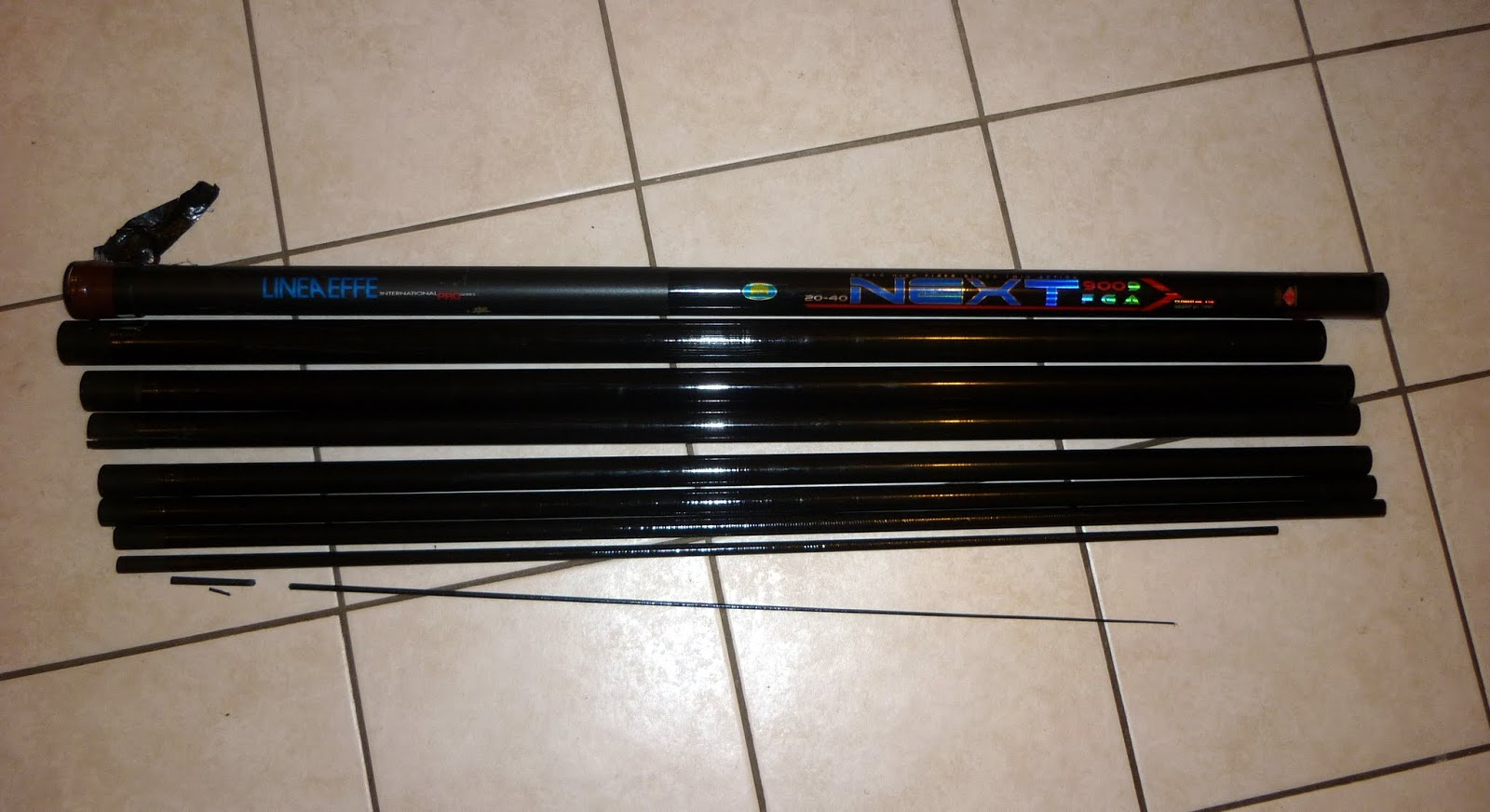 This was a brand new 9-m pole, destroyed (5 out of 9 sections broken) in a gale on Yr Aran.

I’ve just gotten around to writing this up: 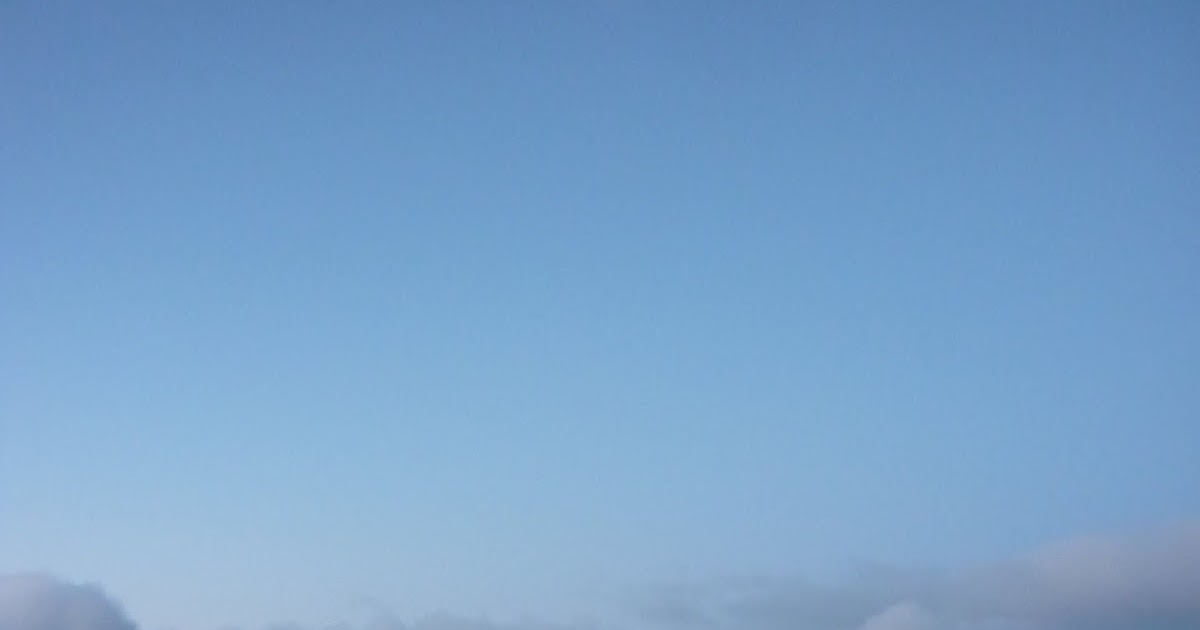 Yr Aran Starting the year with a pre-dawn ascent of Yr Aran, GW/NW-019 has become well entrenched with me. So I stepped out of the house a...