I aim to be on 2m from approx. 1500z this afternoon. Alert already posted, but as they say, “Every little Helps”.

I’m ascending from the Glen Tanar side, which is the nicest approach by far.

I hope for the next time with HF 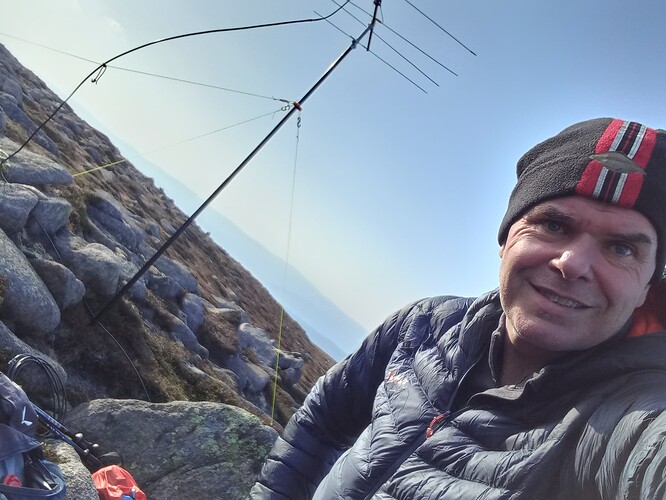 Happy memories of that hill… last significant peak on my TGO Challenge crossing of Scotland a few years ago.

Good work on the most easterly Munro. You were clearly heard on my wee Yaesu handheld 5/8 when your beam was pointed this way even although I was located /P at low level behind the bulk of the Lomond hills, Quite like the ascent from the Queen’s Well from Glen Mark, too. Many years ago Mt Keen was my first of now many Munros. Great take-off, esp to south.

Day off work on Wednesday 23rd March. Jobs to do in the garden in the morning. Freedom from 1200z.

I can see Mount Keen from my road. It’s Scotlands most easterly Munro (mountain over 3000’) and often tagged as one of the most boring to ascend.

Not from Glen Tanar to the north! It’s a long 20 mile walk, but a great deal of it can be done on a bike by using the excellent vehicle track up the glen.

The ascent
I set off from the Glen Tanar car park around 1255, it having taken me just 15 minutes to drive there, using a 4x4 track I know of as a shortcut. It’s a right of way for vehicles (rare in Scotland.)

I was about an hour on the bike. The track ascends gently all the way. Most folk ditch their bikes where the vehicle track becomes a path at a footbridge over the Water of Tanar. I usually pedal on a bit after the bridge and push the bike up hill a bit. How far depends on how brave I’m feeling about the descent! 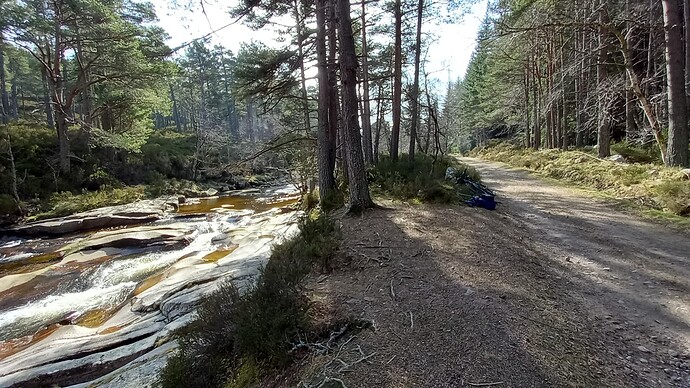 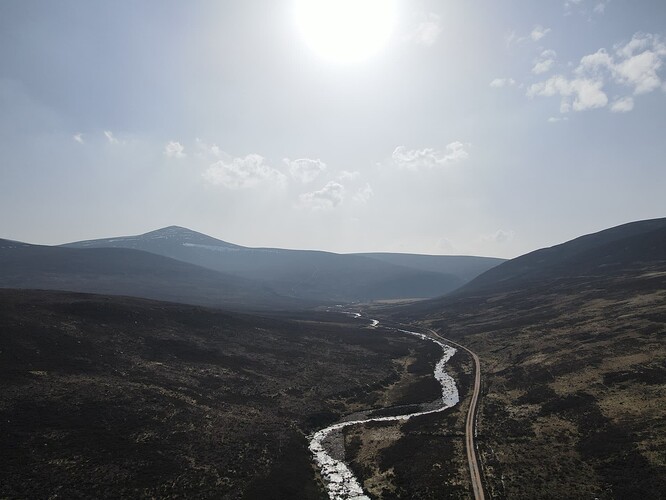 After an hours walking I hit the summit. It was 1500z and I had the place to myself, having passed several parties on the way up. There was a mild SW breeze, so I opted to move away from the trig point, finding shelter on the shoulder of the summit area among some granite boulders. This would give me a good take off in all aspects except for directly west.

My 2m activations tend to rely on a bit of pre-work to be sucessful. Usually that means a few Whatsapps, a post on twitter, an alert and a nudge on here! Thankfully it all came together nicely today.

Simon @GM4JXP called me after seeing my message and then Alan @MM0VPM called in for a summit-to-summit from GM/SS-171. I then worked another two stations and all of that was on the 2m FM calling channel (sorry - centre of activity).

When I eventually put a spot on and shifted down the band to 145.425MHz, @GM0GAV Gavin came straight back, with a further seven stations after that. Highlight was M1DYU Gary, who was on holiday in N.Yorkshire and had taken his radio on a walk. He told me I’d made his day! I reckon about 335km distance. 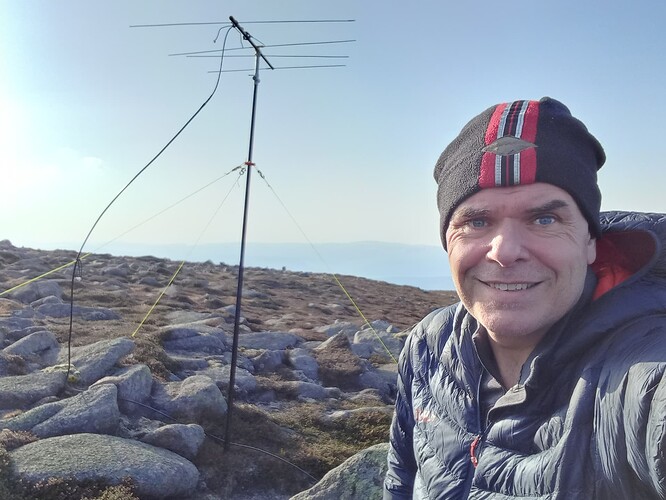 I switched over to SSB and after working two of the FM stations again, one of whom was Ken @GM0AXY who was using a halo in his Edinburgh loft, I then worked four new ones, with a very sketchy QSO with Richie @MW7RJO who was on GW/NW-076, some 412km south of me being ODX. Initially I could barely hear a voice, but pressing my ear to the speaker revealed a callsign and a 4/1 report. 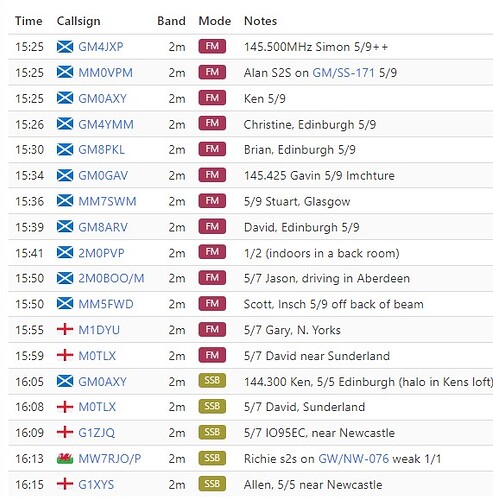 By now it was getting on and the afternoon sun was low in the sky. I flew the drone around for a bit and then headed down back to the bike. I left the summit at around 1645 and was back at the car park at 1800. 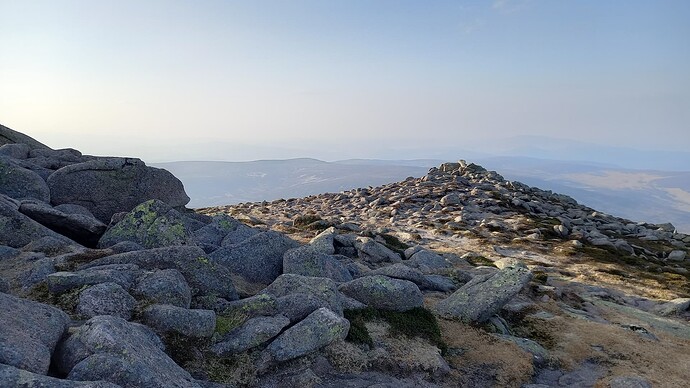 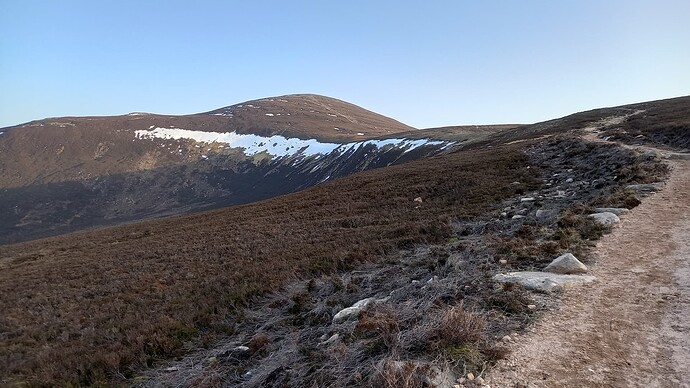 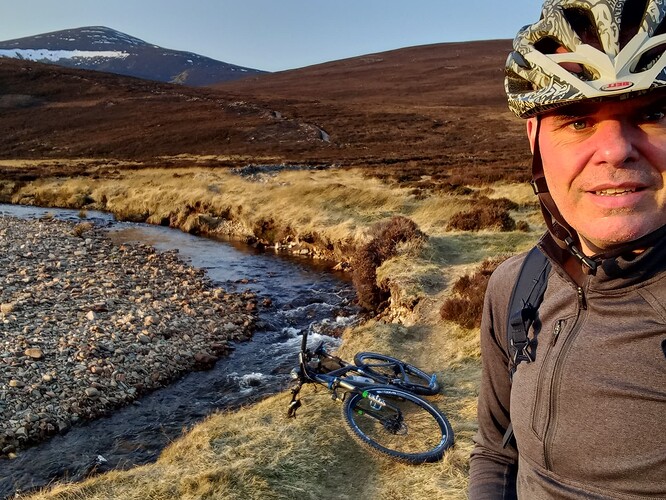 I got home at 1820 and didn’t need my headlights. Can’t wait 'til the clocks go forward this weekend.

Summary
Great fun! The hardline upgrade really worked, keeping the coax well away from the reflector element of the beam when using 40 watts on FM. I did receive a report from one station about overdriven audio, so I reduced the mic. gain from its default setting of 50,to 35 and that seemed to do the job.

Thanks to whoever recommended the 5D-FB hardline - it was someone on here that mentioned it. I managed to source a length on ebay with a N-type at one end and an SMA at the other. Perfect!

Back in my youth, I pretty much rode my bike to the top from that side! It’s certainly a shorter route, however the Glen Tanar route needs to be tried at least once. The forest is lovely.

Thanks again for the S2S

on my TGO Challenge crossing of Scotland

Oh, you must have chosen an interesting route. I’m guessing Fort William to Corrour and north east from there?

the Glen Tanar route needs to be tried at least once

It looks better in your pictures compared to how I remember the Queen’s Well route (and on foot) and it looks better on the map too.

That does look particularly ambitious.

I once took my bike over the route that starts at NO 36662 94810 - the top of the Glen Muick Road at Bridge of Muick. I had a valve blow out at the top and had a long walk back until I could get a phone signal to call Mo! It was a lovely route though.

Thanks for the SOTA and the fantastic contact on 2m FM. I was on Hinderwell Beacon just South of Staithes using a Yaesu FT70d with std antenna at trig point T:UK - Hinderwell Beacon. Best 73 Gary M1DYU

I was on Hinderwell Beacon

I did write that down Gary, but couldn’t read my scribbles later. Really, that must be QS0 of the day for me. You were weak and broken at first, but came up with time. To do that with a standard handheld rubber duck is awesome!