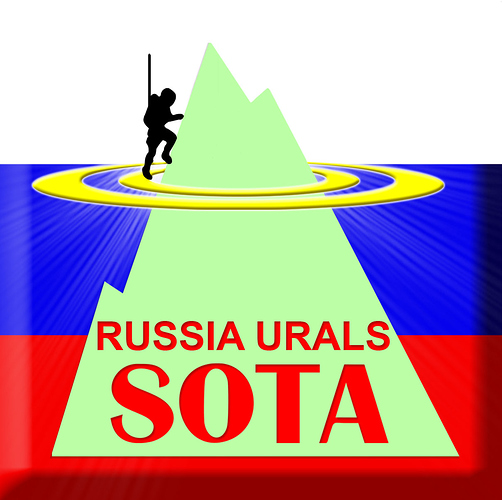 Dear friends, I am happy to inform you that we received a permission to work with a special call sign R05SOTA from 13 August to 30 September to celebrate 5 years of establishment of regional association R9Urals! Despite low numbers of activators and remoteness of mountain areas we will try to be active with special callsign. We are planning to participate in SOTA European day on September 19th. Currently, i placed an order for design of electronic memorable diploma/certificate and trying to figure out what can be the reasonable conditions for qualifying for it. Since our activations happen quite rarely, the qualifying conditions should be quite simple, for example, for hunters - for gaining 5 points, and for activators - for conducting 5 rafiocommunications during one or several activations. At the same time, communications conducted throughout the whole 2020 can be counted in. Points for redio communications with special callsign can be counted as double. I would very much appreciate your feedback and all your suggestions on possible qualifying conditions!

Hallo, I am also happy with the initiative, and look forward to the activations and the correct rules for obtaining the award. succes.
ON7QR 73 Don.

Unfortunately, the planned activation with this call did not happen today. Lingering and heavy rain forced us to urgently evacuate from the area. The mountain road became practically impassable. The winch and the speed of decision-making helped us out …
73
Vlad

Well done, safety first Vlad , there will be a better day.
73 Don.

It was great to get in your log on 17 mts yesterday. Good luck guys.
de 2E0WDX/m

Vin, thank you for your persistence in carrying out this QSO!
73! Marat R05SOTA. 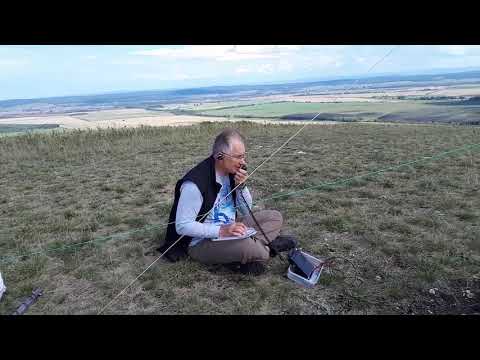 Thanks for the QSO, Marat. Glad I could work you with the special callsign right at the beginning of your license permission interval 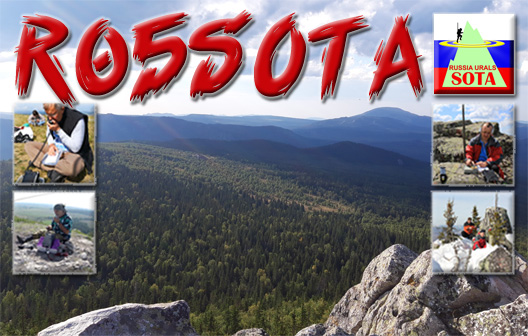 Please be informed that we will continue our activity until 30th September to celebrate 5 years of regional association R9Urals. To date, several activations of Ural summits have been completed within special activity days with a special callsign R05SOTA and with personal callsigns of activators.
I would like to thank you Sergey R8WB, Igor RV9WIW, Vladimir RX9WT, Igor UA9CDC and Mikhail UA9CTT who supported this activity!
The last weekend was especially productive when 4 peaks were activated, two of them - for the first time! I hope that the good weather will allow other radio amateurs to take part in the days of activity from the Ural peaks.
This activity began on Saturday 15 August with a joint trip of Marat RA9WJV with his wife Irina and Sergey R8WB with his son Pavel to the top of Tora-Tau R9U / SO-235. During this successful activation, numerous contacts were made on 144 MHz FM and 14 MHz SSB. For Sergei, this was the first introduction to the SOTA program. He shared his positive impressions in a video available for viewing at the link:
https://youtu.be/aafUtFtOf18 .
The Tora-Tau summit is a unique natural object - the remnant of the former barrier reef of the ancient sea with an age of more than 230 million years. Due to geological processes several million years ago, four ancient reefs rose above the surface of the plain between the cities of Sterlitamak and Ishimbay. Their common Turkic name is shikhany. Unfortunately, one of them, Shah Tau, was destroyed as a result of the extraction of limestone necessary for the production of soda at a local chemical plant, which began in the 50s of the last century.
The three remaining shikhans, Tora-Tau, Kush-Tau, and Yurak-Tau, are SOTA qualified summits and are easily available for activations. Two of them have the status of protected natural sites, and the Shihan Kush-Tau did not have such a status until today and could soon become another source of raw materials for a chemical company.
Symbolically, it was on the day of activation, August 15, that the struggle to save this peak from destruction between environmental activists and local residents , on the one hand, and representatives of a chemical company, supported by security organizations and the police, on the other, reached its climax. The clashes reached an unprecedented fierceness, but ended by Sunday evening after the head of Bashkortostan Republic promised to keep Tora-Tau intact. A short video about the history of this confrontation in English available for viewing at the link:
https://youtu.be/0wPLszqjHkA
In our plans, on September 19, if weather permits and there is sufficient number of activators, to carry out the simultaneous activation of all three shihans within the framework of the European SOTA day. It might be possible to make the first S2S connections between the Ural activators.
I am happy to update that commemorative diplomas marking the fifth anniversary of our association are ready and are already being issued. The conditions for obtaining the diploma are as simple as possible - chasers only need to make 2 connections with the activators of the Ural peaks during the year of 2020, or 1 contact with a special callsign on the days of the activity. A separate diploma will be issued for S2S contacts with Ural activators on similar terms. The numbering of diplomas is separate by type of communication and for VHF. Applications for diplomas can be sent to: r9w.award@gmail.com . It is preferred that applications follow the form from the logs from SOTA database, however any free form of application is welcomed as well. 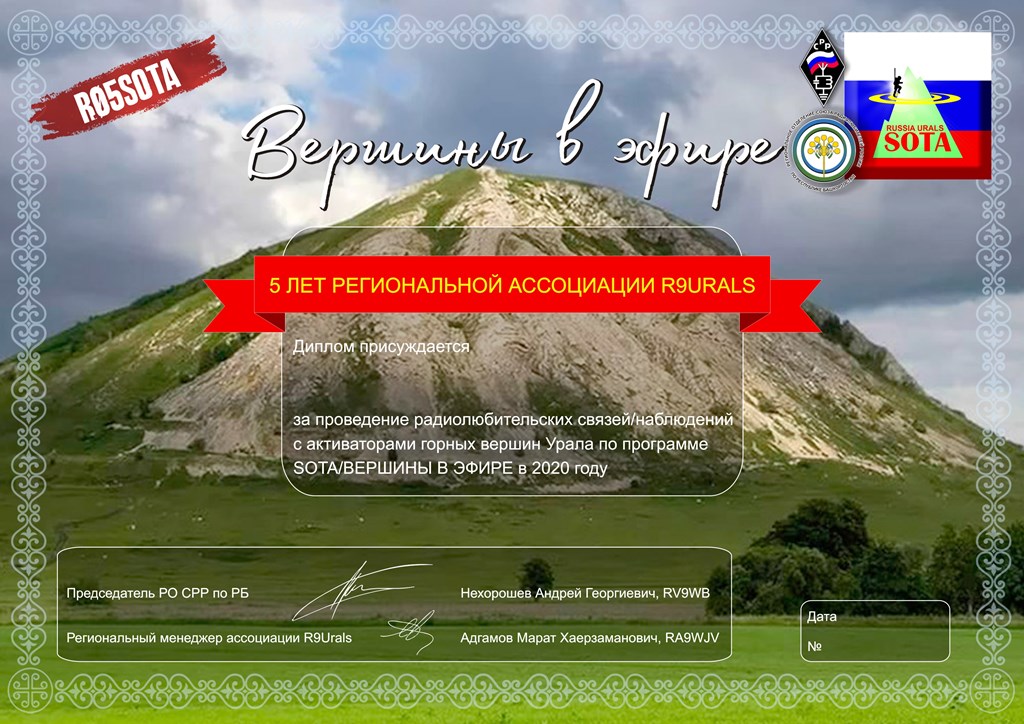 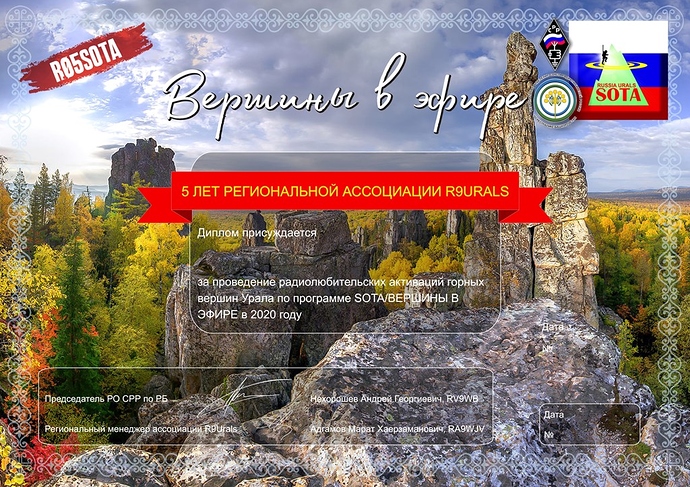 Unfortunately, due to the database upgrade, I currently do not have access to the logs of the activators of the Ural association. Restoring this service for me as a regional manager will allow me to correctly check the submitted applications.

Warm wishes to you all for a restful weekend ahead!
Kind regards,
Marat RA9WJV

Dear friends,
Season’s greetings to all SOTA enthusiasts and wishes for a happy upcoming New Year!
Special thanks to the chasers and activators who took part in the events of the R9Urals regional association marking its 5th anniversary in 2020! This anniversary year was marked by the high activity of R9Urals activators. 30 activations of the peaks in the South and Middle Urals were carried out, some of them were activated for the first time. The activations were attended by: RL8C, UA9CTT, UA9CDC, R9WCJ, RX9WT, RA9WJV, RV9WMZ, R9WY, R9WL, R8WB, RV9WIW. From August to September, activations were carried out using the special callsign R05SOTA. On September 19, a group of R9Urals activators took part in the European SOTA Day, simultaneously working from four peaks, which made it possible to make the first S2S connections between the Ural activators. QSLs with special callsign R05SOTA have already been printed and are being sent out. 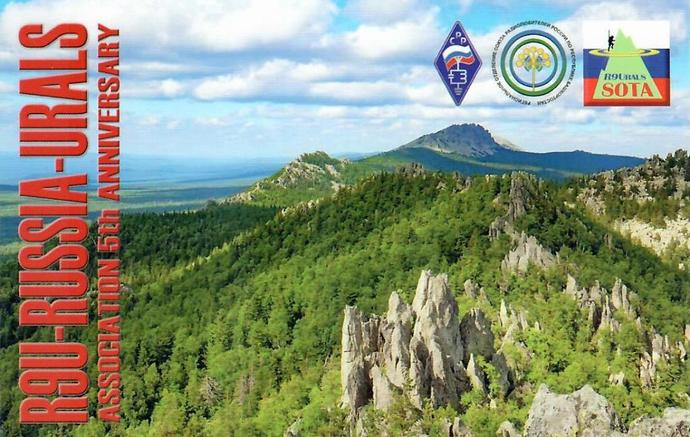 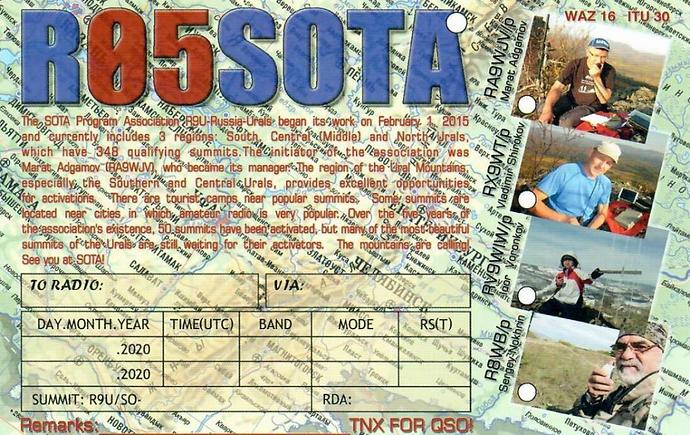 The issuance of colorful diplomas tochasers and activators for connections in 2020 is also being carried out. A separate diploma is awarded for conducting S2S contacts with activators of the Ural summits. 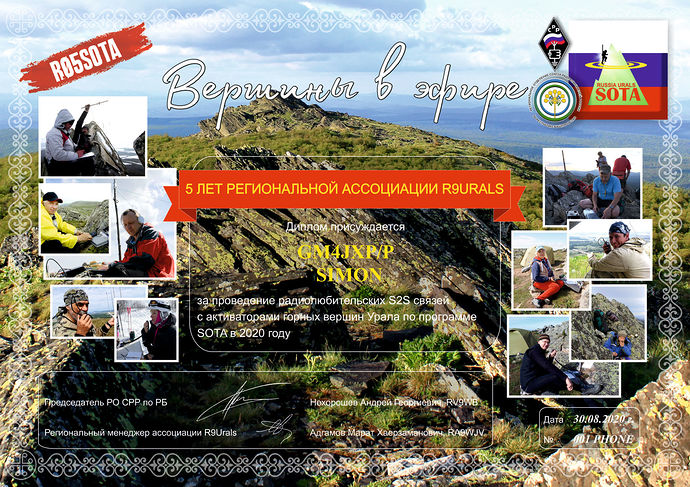 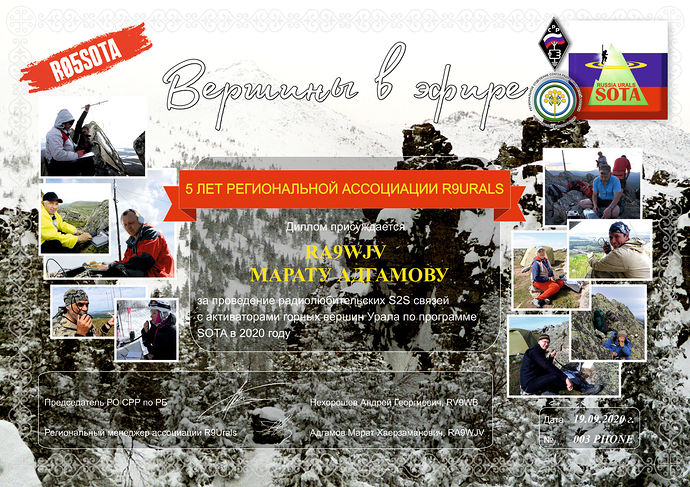 To receive a diploma file for self-printing, please reach me out at r9w.award@gmail.com . At the request of the activator, this diploma can be issued in “winter” and “summer” design options.
See you on air in 2021!