Having got back from a busy spell and a week away with work I was suffering SOTA activation withdrawal symptoms, my last being in GI on the 4th Sept. I looked at the wx forecast on Monday and Tuesday and it all looked a little dire. Listening to the news on Monday night it appeared that the approaching front would clear the Isle of Man by Tues morning. I got on the web and printed off the info I needed and hatched a preconceived plan. I booked a hire car (small van) for the grand total of £21 and was advised that I would receive an email within 24 hours if it would be available…I planted a couple of alerts on the SOTA site, packed my kit and got off to bed asap. Having set the alarm I left home at 0615 for Manchester Airport. I arrived at the ticket desk and organised myself a ticket on the 0825 at very short notice. My job, which entails quite a bit of travelling, allows me to do this at a pretty reasonable price. We took off on schedule in the drizzle and rain and I wondered if I was right in the head. As we approached the Island the skies brightened and we landed in a very sunny IOM, on schedule. At 0930 I was in my small Nissan van and on my way to GD-001. My plan had come together remarkably well considering the complete lack of organisation and would have been perfect had I not taken a wrong turn and got lost toward the Laxey Wheel. Having regained my bearings and found the TT course, I followed it and parked at the Bungalow. I started the ascent toward the summit and despite being temporarily unsure of my position, arrived quite a bit ahead of my alerted time. I had allowed a fair bit of time for all the other perceived disasters which didn’t actually happen. At the top, I picked my moment, amongst the Muggles, and strapped my dipole to the trig point and activated on 2m with 12 QSOs including Bob G6ODU, Brian G4ZRP, Sue G1OHH and Barry M6BDV amongst the regulars. Having worked all I could hear, I then attached the 4m handheld but got no replies at all. I had alerted for 7.032 on CW but it would have been impractical to erect a 40m dipole amongst the Muggles so I elected to move to the far side of the pathway and attached my fishing pole support to the railings. I was delayed by the many questions from the passers by who were all quite keen to know what I was going to catch and if I had a very long line. Another asked quietly ‘government or private’ - I couldn’t resist - he winked and left. A quick call of CQ Sota attracted a lovely signal from Roy G4SSH who placed a spot for me (thanks agn Roy - I don’t know what speed you send at but it is ideal for me.)
There was then an enormous pile up but I was only able to pick out those who were QRS as requested - as with previous moans - I just cant read it if it is too fast for me - sorry. I spent quite some time doing my best to pick out as many as I could and ended up with around 18 CW QSOs.

I packed up and descended back to my little van, stuck my stuff in the back and zoomed off to GD-002. I didn’t know where to attack it from and took a detour, with the advice of a local. This would have left me with a 4km walk and so I elected to return to the Cottage end by the wood and ascend from there. It was a steady walk along the stone track until it levelled off before I had to set course across the heather toward the summit. I couldn’t find any sign of the track marked on my map. Disaster struck half way up the moorland as my tummy rumbled and the course of nature took it’s place…nuff said.
Onwards toward the large quartz rock and then to the summit. I activated GD-002 on 2m fm with around 10 replies in 10 mins. I called on 4m at G4ZRP’s request but nothing heard. I looked at my watch and realised I was not going to have time to erect the dipole for 40m and get to the 3rd summit too. I packed up quickly and made my way back to the wee van. GD-003, South Barrule next. I navigated directly to the bottom of the track and set off without further ado. I phoned the station manager at work and she agreed to spot me as QRV in 20 mins, my estimate with the summit in sight. Unfortunately it was a false summit and it took me another 10 mins to reach the trig, surrounded by the stone enclosure. I set up for 2m fm again and activated easily with 7 contacts in as many minutes. I set then set up the dipole for 40m, in a pretty stiff breeze, before calling CQ SOTA in my very QRS way. Such an almighty pile up. It just sounded like a continuous noise and I couldn’t pick anything out. I called Roy G4SSH in the hope he might be there and indeed he was. I should add that in my rushed packing the night before, I had forgotten to pack my headset which didn’t help my cause. I worked another 24 stations including G, PA (Wim), ON, DF, DL, HB, OK, S51, F and IK. I took my last call at 1701 local and then got packed up. I ran down the hill, got in my van at 1730 and zoomed off to Castletown to refuel the van at 1745 - off to the airport and checked the van in at 1800. I checked myself in at 1805 for my 1840 departure back to Manchester, which left on time.
A busy day but thoroughly enjoyable. Sorry I couldn’t stay to get the last of the callers but it was squeaky tight enough.
I will be back in GD on Tuesday 4th Oct, this time at my work’s expense. I will try to get GD-004/5 activated then, time and weather permitting.
Thanks to all who called in.
Regards
Dave
MD0TUB
(Tubby) 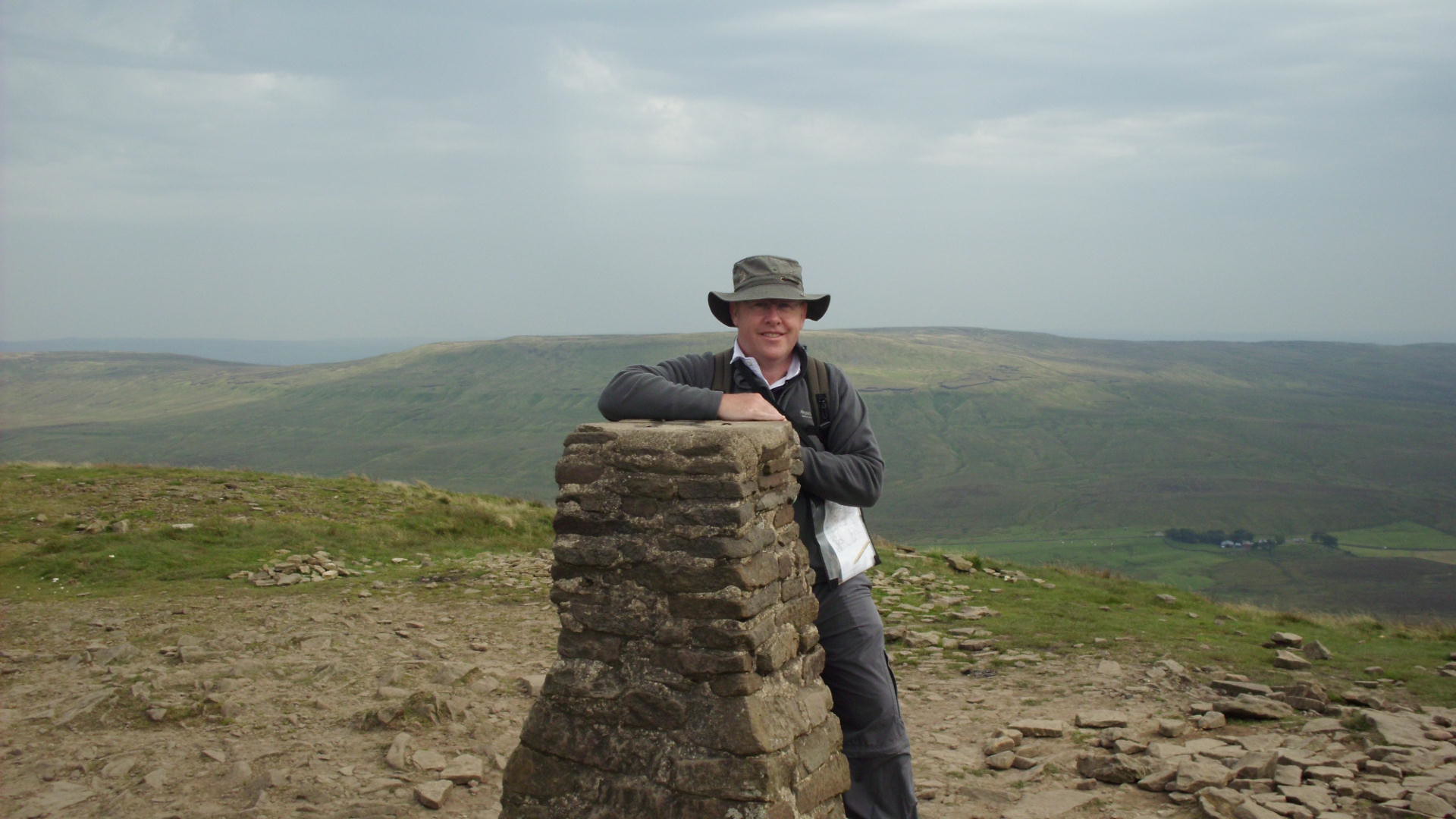 Hi Dave, just to let you know that your dipole was working extremely well on 2 metres from GD-001. I had nipped out of the office for a spot of “fresh air” & after seeing that were QRV an hour early took a listen on my handheld.

Unbelievably I could hear you!

You were not very strong & I had to move position to read you properly. I did give you a couple of calls, but you didn’t hear me.

Hardly surprising as I was in the middle of an industrial estate in Blackburn surrounded by steel clad buildings Hi!

I had checked the path to GD-001 from Belthorn, which is the highest ground near to where I work & that is true line of sight, but being an hour early I didn’t have chance to get up there.

Well done on the activations & on the CW

I will be back in GD on Tuesday 4th Oct, this time at my work’s
expense. I will try to get GD-004/5 activated then, time and weather
permitting.

Hi Dave,
Well done…
Sorry I missed you, will keep an eye on the alerts and try for a S2S on the 4th October.

Those were some pile ups on 40m CW Dave! Couldn’t get a key in edgeways and I heard several well known chasers having the same problem. Maybe next time I’ll go out portable on 2m with the 150W linear and the largest beam I can get my hands on.

In reply to G4OIG:
Hi Gerald
Thanks for trying (and for the points from Kirk Fell the other day). My CW is not great and I didn’t know what to do other than try and pick out a couple of letters followed by a ? I was only using 5w into the dipole as usual and couldn’t believe the response. I also had a key failure on GD-003, it kept sending a stream of … When I go back across (as the locals say) I will bring my homebrew 6 element Yagi for 2m and work 2m SSB and CW too. GD-004 & 005 are a little smaller and I’m not sure how I will get along. I will have plenty of time for the two.
Regards
Dave

In reply to M0TUB:
Glad to have worked you on 40M CW from both GD-001 and GD-003. I listened to the speed you were sending at and replied with a slightly lower speed - about 14WPM if I remember correctly.

I agree with Andrew, there is only one “correct” chaser speed which is the speed of the activator and should be adjusted for every contact.

As a chaser I do not mind all the speed merchants that do not understand this and reply to a QRS station at 20 WPM+ because they do not get a reply.

In reply to M0TUB:
Hi Dave
Nice to work you on a couple of the GDs and sorry to see you had a few navigation probs on the roads etc. In the Snaefell summit tips there is “GD in a Day” with info on doing them all in a day,once only, never again! We ended on 005 at 9.30pm begging for contacts and having eaten all our food. “GD in a Day” might help you on your visit next month, be careful on Bradda, my knee is still recovering from the descent in July! if you’ve a head for heights you may do better up the coastal path from the tower. Roll on next July we’re already booked
73
Rob
G4RQJ

In reply to 2E0YYY:
Still on for tomorrow Mike?
I’ll only have a dipole(H) for 2m SSB but I’ll give it a go after a call on 2m FM. This cos the 6 ele yagi beam won’t fit in the suitcase. Expecting there to be a more seasonal touch to the weather…
Regards
Dave

In reply to 2E0YYY:
Still on for tomorrow Mike?