The WX forecast for this part of GM was sunny at first, cloudy at lunchtime then sunny later. Queensberry is in “bandit-country”, i.e. the other side of the M74 and is a pain to get to from my QTH but it’s a unique. It’s at the end of some remote narrow roads and The Lower Hills lie between me and Queesnberry. I either go around the hills and come from the West or go the other way round this hills and come from the South East. The roads are particularly windy and whilst that would be fun in the sporty car I have, a colleague remarked that the road to Queensberry was the worst he had seen in recent times and almost wrecked his Peugeot RCZ suspension! I went in the Tonka toy, which is slower and noisy. It swallowed the bumps with ease. And the road, well it’s been resurfaced and many of the problem areas are now fixed.

The start is at Mitchellslacks farm. There is space for 3 Focus sized cars by the start of the Public Footpath. Or one pickup! I put into 4wd and drove it into the longer grass/rougher ground to make more space for anyone arriving after me. After that it was boots and stuff on then along the path. This runs through the farm and I always worry that this will disturb the people there. It doesn’t seem to be an issue and within 5 mins I was past the farm onto the good track that goes past several start positions for the hill.

My route was as far as The Law where the path splits, I went right around the back of The Law. Then across the electric fence and up the steep bank to Glengowan Hill. This was all easy to be honest. The next bit should be just a gentle plod across pathless terrain. I could see the cairn marking the edge of the summit in the distance. And the tussocks. No… Galloway tussocks. Well they were small, about 20cm high but it made the walk a real chore rather than a bimble. Apart from those kilometre or so of tussocks this was a follow your nose up to the top kind of mountain. Easy. Computer said 1hr51 and it took 1hr58 including breaks of which there were many!

The view back to “civilisation” from where the path splits. Cracking day! If it wasn’t for windfarms you would not see any human signs apart from the odd farm house. 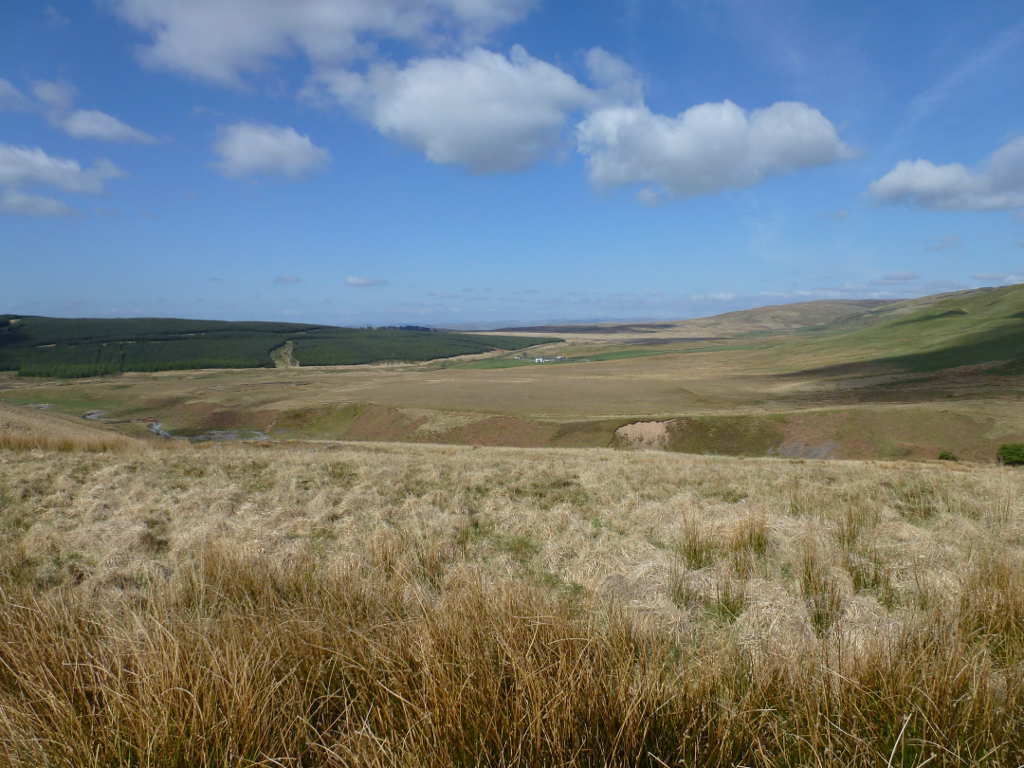 The cairn at the top of Glengowan Hill, the aiming point when climbing the bank. First of the windfarm turbines, these are from the Forest Of Ae Windfarm. 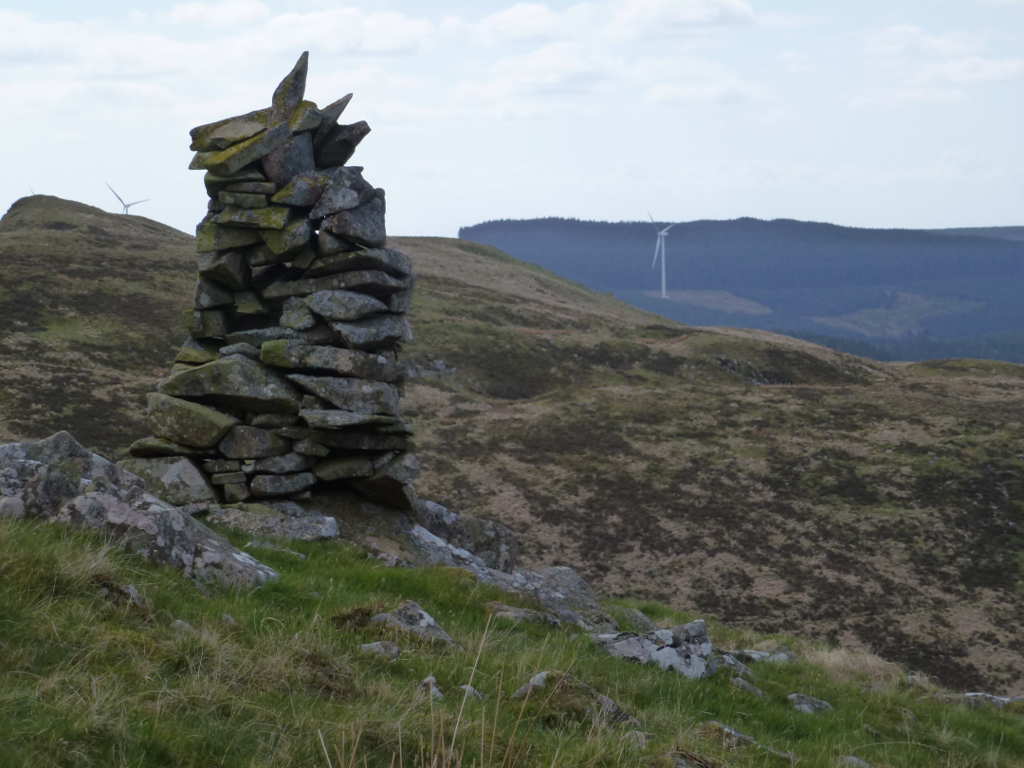 I started on 60m and worked GW4BKG with difficulty. Oh dear, broken sky. I could hear plenty of stations on 60m but they couldn’t hear me. Or anyone else

40m SSB was bad too. DK9ES/P disappeared in the QSB but I did work him in the end. Terry G0VWP was just workable but we had no problem exchanging info. Amazing considering he’s in a city so he must have low noise on 40m. 40m CW was slow too. 25 mins to work 6 stations, awful. I could hear lots of Windmills stations and the WAB contest was in full swing. So many people will have had a rubbish time because the propagation was so bad. 30m was bad with lots of QSB but I managed another 6 in 20mins before returning to 60m and bagging Rob G4RQJ/p for an S2S. 16 QSOs in 90mins, bah!

In between listening to the keyer sending my CQ calls I took more photos. 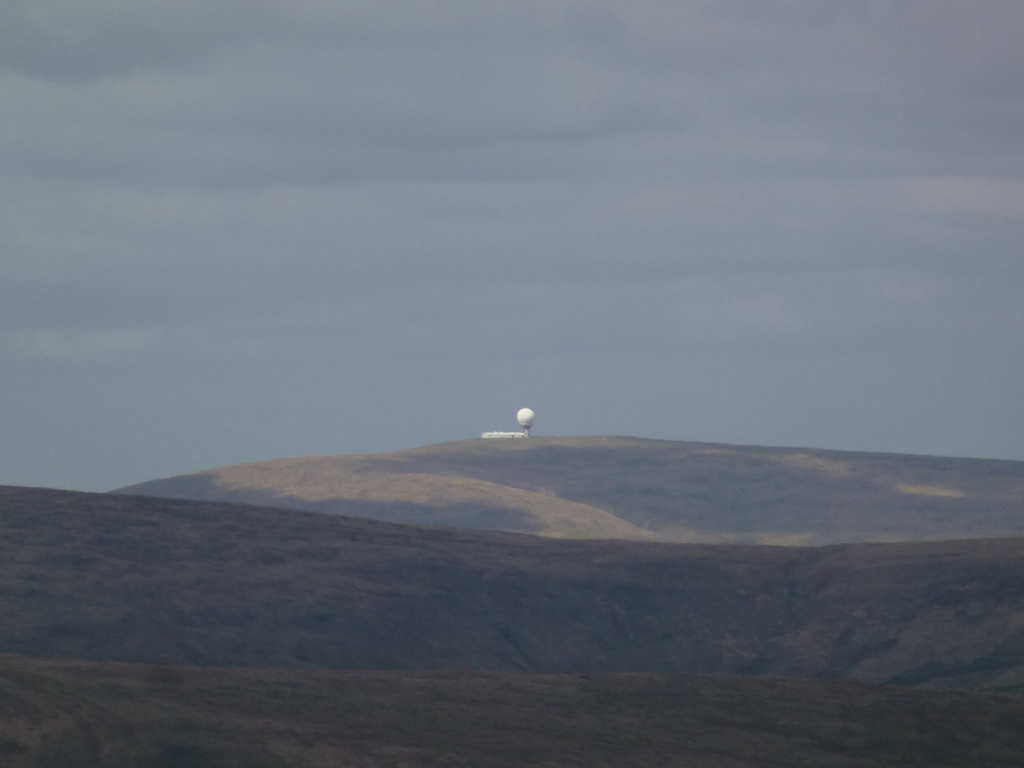 Summit cairn and most of The Forest of Ae Windfarm. You can see the WX has got a bit worse. Cold enough out of the sun to now need a fleece. 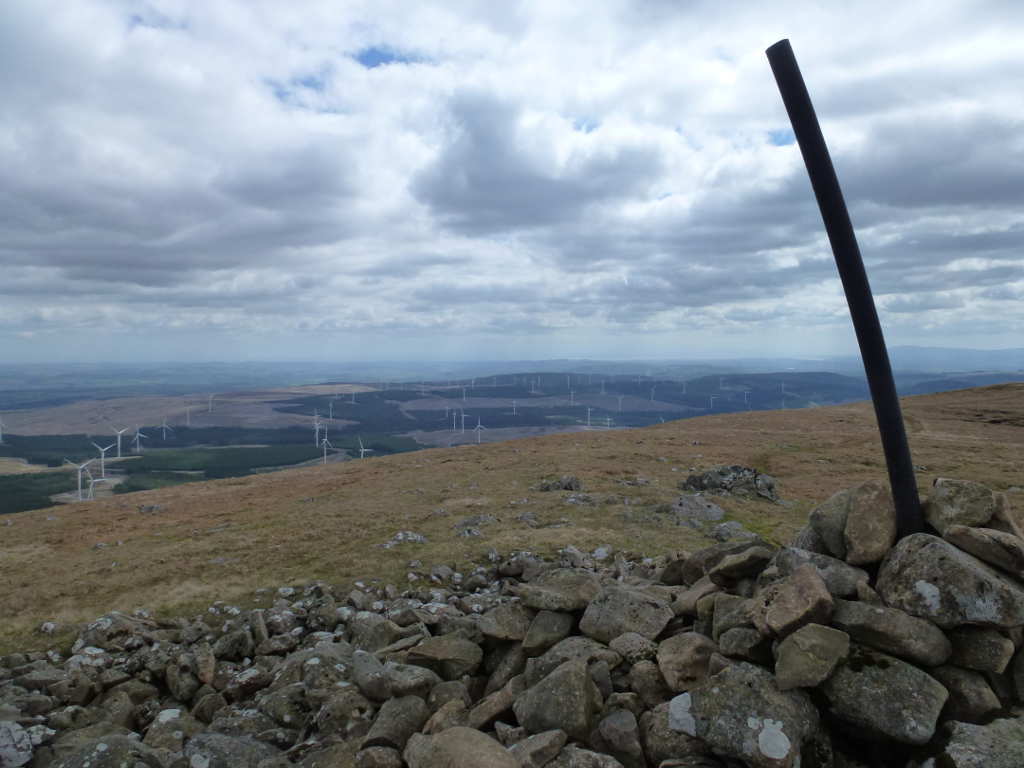 The shapely hill in the distance is Tinto Hill GM/SS-064, 3 more windfarms to add to the tally. 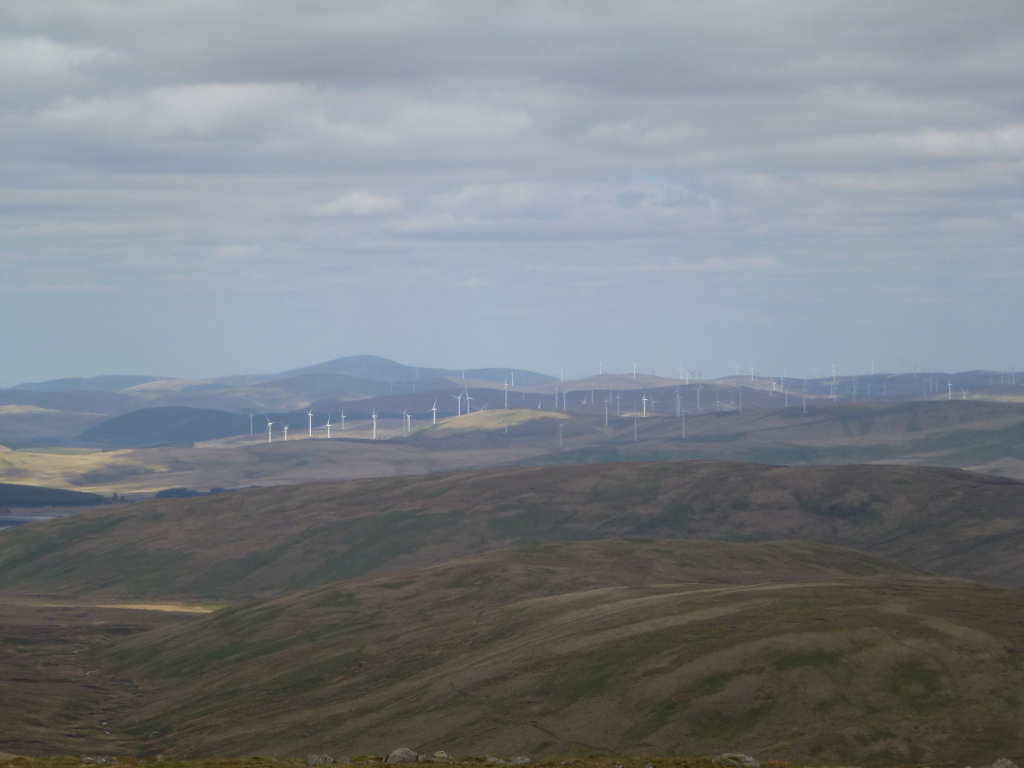 Criffel GM/SS-130 in the distance and the Solway Firth. 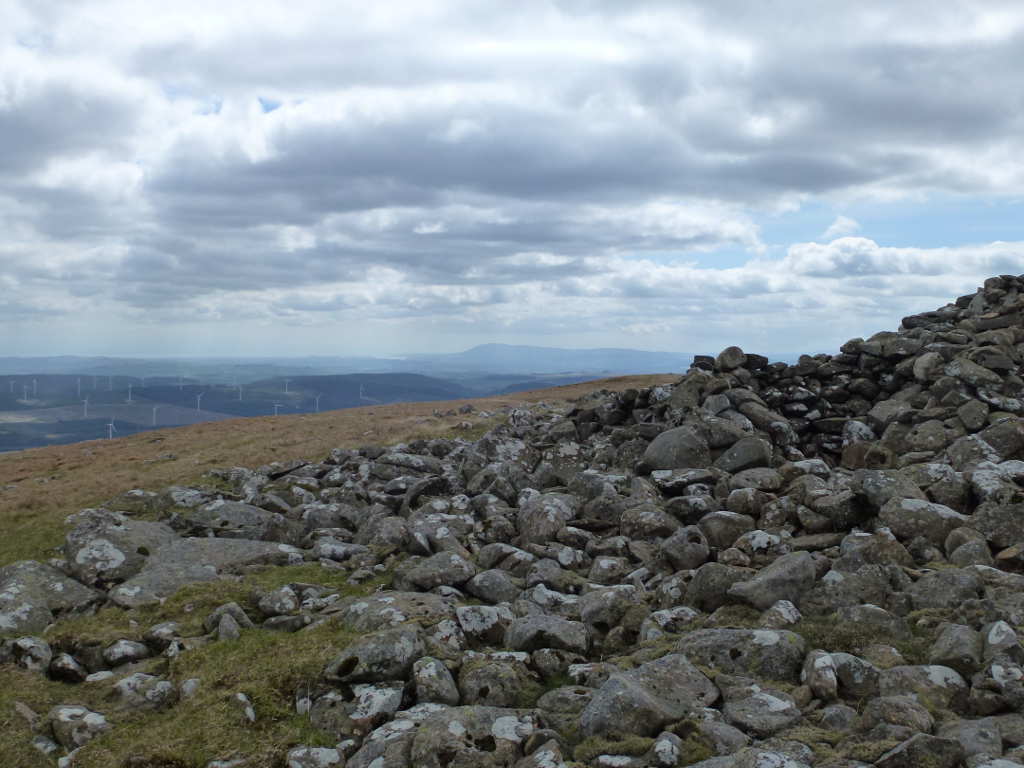 That’s more like it, the very pleasant Culter Fell GM/SS-056 on the horizon and just peeping through, Gathersnow Hill GM/SS-077. And another 2 more Windfarms. Also somewhere in there is the “bog on a slope” of Hods Hill GM/SS-131 (avoid it!) 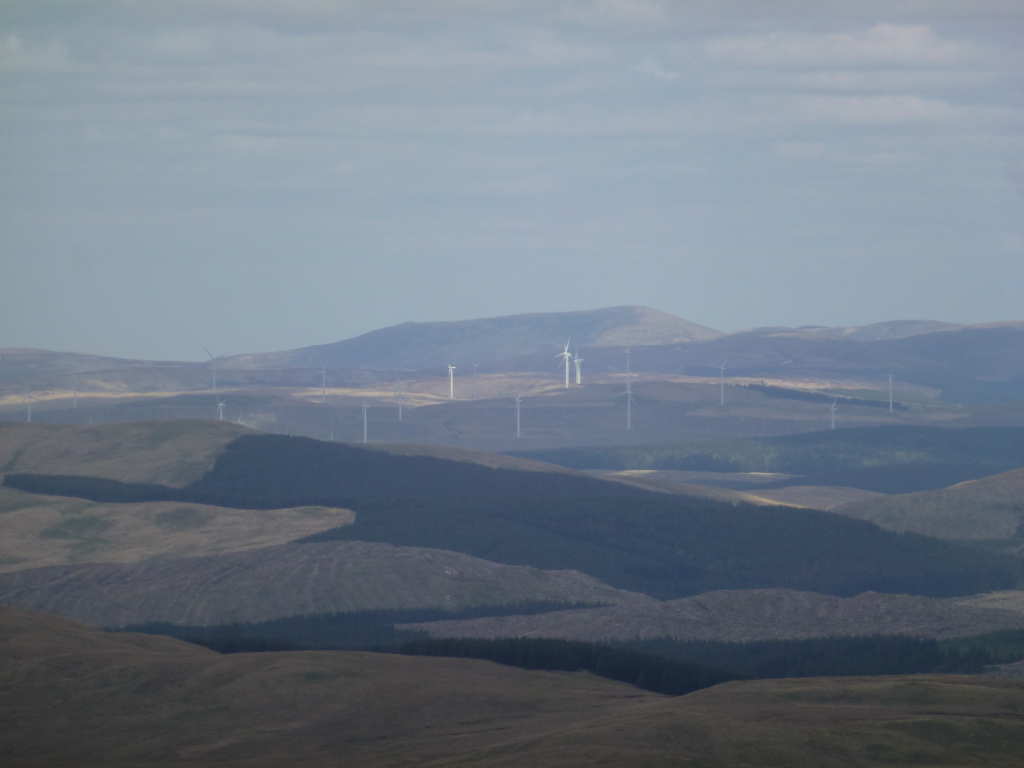 All good things must come to an end, I’m just wondering when this broken propagation will end. I packed up and set off home. I decided I’d try a less tussocky way back. I’d come the way I did because I enjoy wild walking and this is the 1st proper wild walk I’ve done since my back injury. However, there is a path that drops down to the track I had followed earlier. It was trivial to find going down.

Track to the track, follow this to its end. 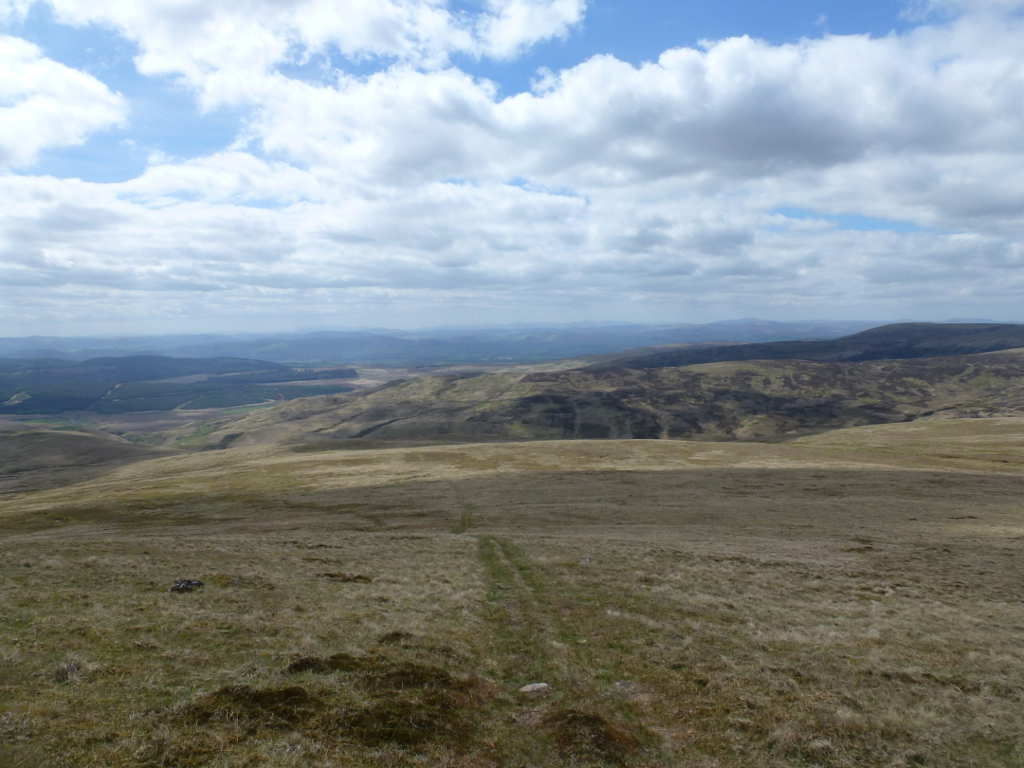 The track comes out here by a gate. The sign used to say “To the hill” or such but it’s seen better days. As has the house a few hundred metres on. Marked as “new house” on the map, it’s probably 100 years old and been abandonned for a long time. 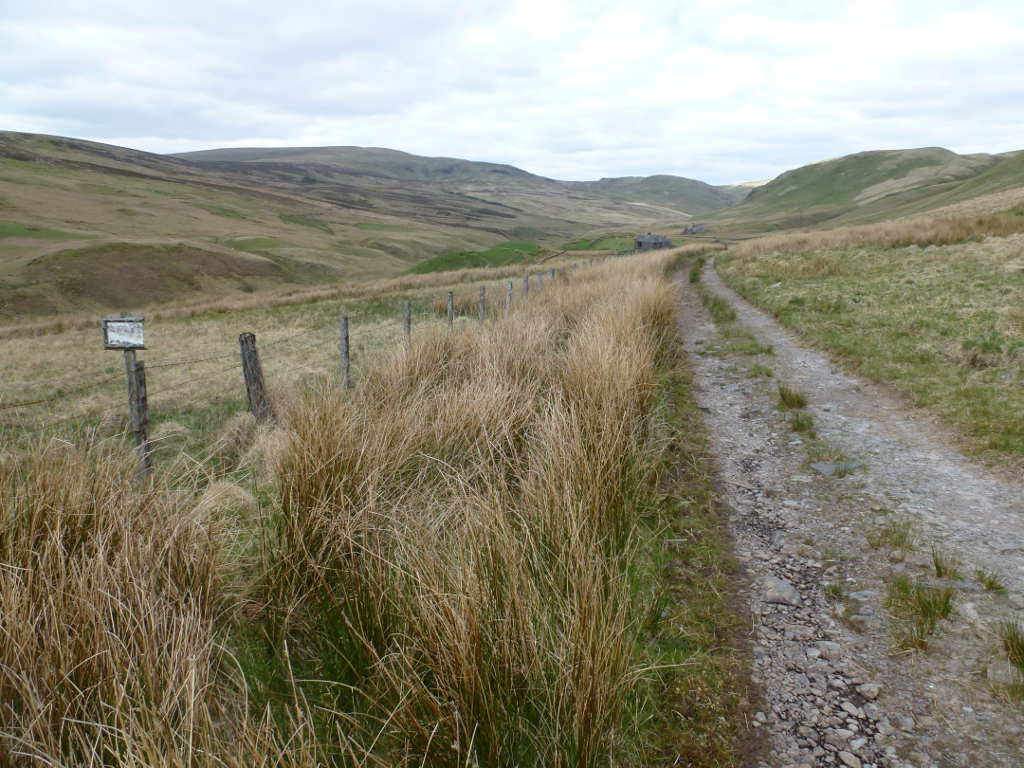 Here’s what the start of the track looks like. It goes up steeply for a while then becomes a plod to the summit. 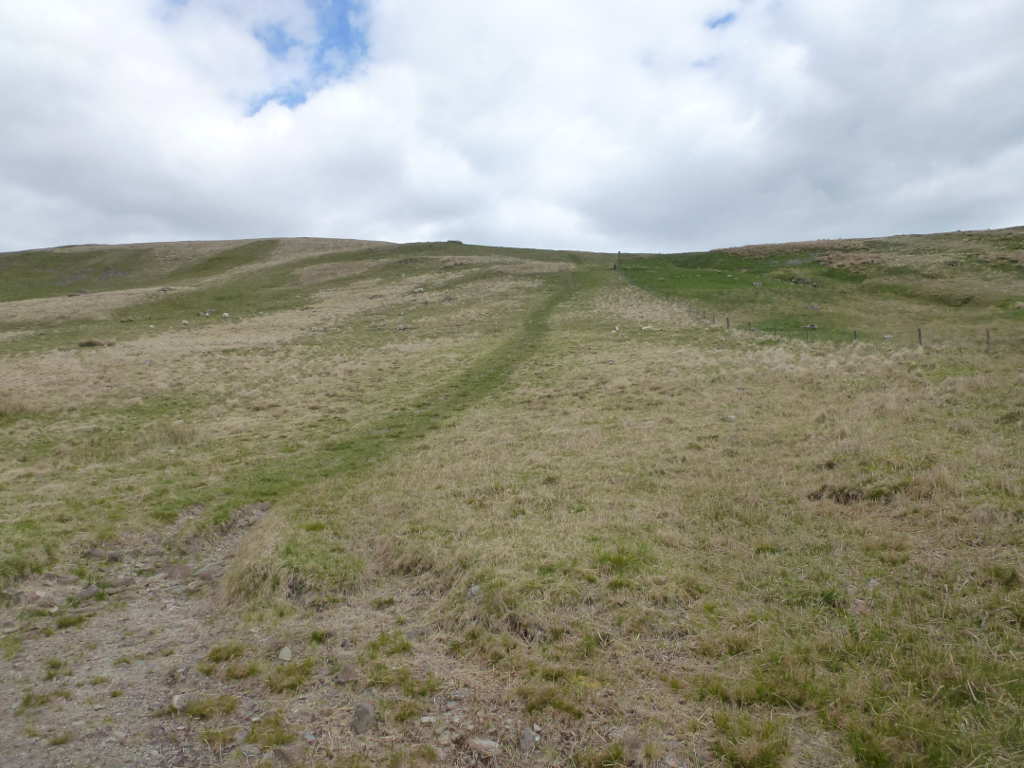 Finally, on the walk back you can look at the Capen Burn which is very pretty. There were plenty of sheep and lambs about but I heard some bleating that didn’t sound right. Quickly I spotted a herd of feral goats. 3 adults and 7 or so kids. 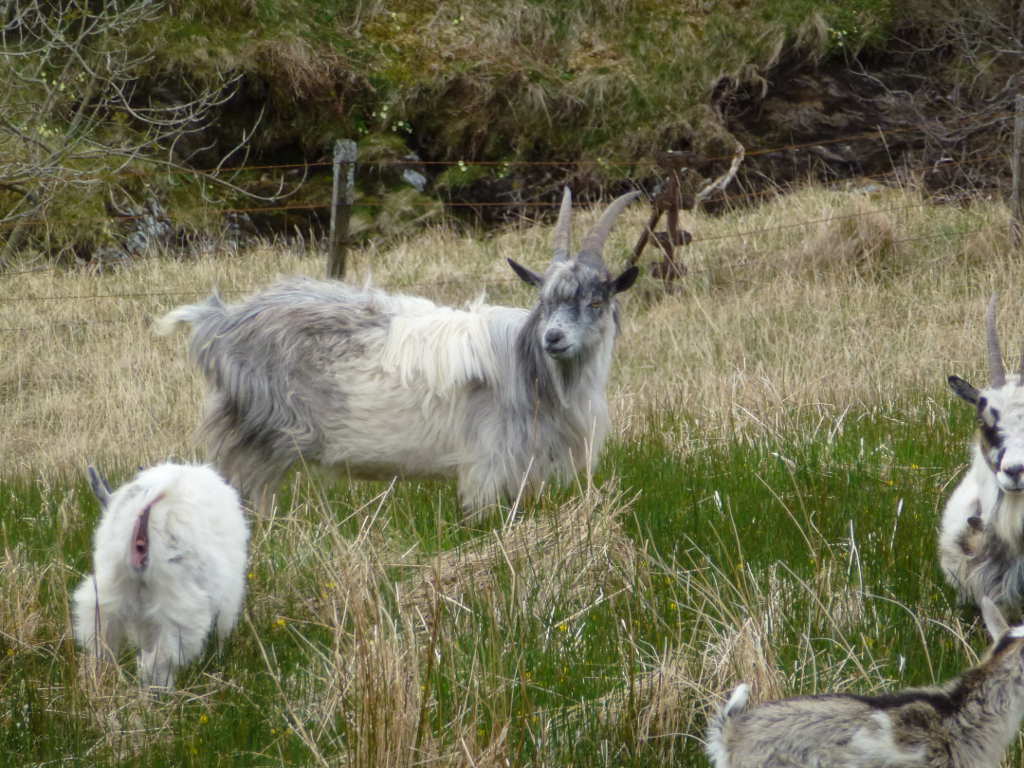 In fact there must have been well over 50 of them on the lower slopes as I walked out. Back the car in 1hr20mins, boots off, Red Bull drunk and I went back the other way as this let me drive through the village with the shortest name in the UK, The Village of Ae.

A good walk spoilt by an an uncooperative sky. Boo!

I saw you spots today, Andy. I tried to copy you on 40m SSB without success. Later I copied you extremely weak on 40m CW. I called you once but you didn’t come back to me and I had to leave the shack, so I had no chance for a second call

Thanks for the report.
Best 73 from Guru

EA2LU was loud for a few seconds, with the QSB he was checking if I was QRV and must have heard DK9ES/p and me and waited. But I never heard him again. Conditions were truly horrible.

Pretty unique landscape !
I can understand why there are so many windmills.

Not much protection in case of a sudden rainfall but of course we all check the weather predictions before heading out,i always bring along a light raincoat, your never know !!

Lots of space to (try to) escape in case an angry goat comes runnin’ at you !!!

Thanks for the images from your part of the world, beautiful and different.

EA2LU was loud for a few seconds, with the QSB he was checking if I was QRV and must have heard DK9ES/p and me and waited

He probably called you to find out whether you were QRV on the frequency but, since you were coming pretty weak and given the higher QRM level he usually gets in the city of Pamplona compared to mine in the countryside, he probably didn’t hear you and that’s why he never called you again.
Although you were coming weak on 40m CW I’m pretty sure I would have been able to work you should I have had a few more minutes to try calling you in the next 2 or 3 QRZ? from you, but, unfortunately, it wasn’t possible for me to stay longer in the shack at that time.
Best 73 from Guru