Had a contact this afternoon with Pom, DG7ACF/P on DM/NS-121 the summit called “Fast” - that doesn’t sound anything special until I add that it was on 20m SSB and we exchanged true 5-9 reports. At the end of the contact, he dropped into the noise. This appears to have been a 2 minute window when the direct contact was possible. At this distance a contact on 14MHz “should not” have normally been possible.

A contact on 7MHz would have been more normal but this was on 14MHz and we both commented that we found it strange.

Does aircraft reflection work on the HF bands as it does on VHF?

The reflection depends on the albedo of the aircraft at the frequency involved. Yes it does, Robert Watson-Watt’s RADAR tests in 1930’s used 6MHz ISTR and the Chain Home RADAR stations used 20-30MHz.

I think you can use the FlightRadar24.com site to replay old data so perhaps you can run their data over the time of the QSO and see if there was a plane in the correct place.

Here’s the path, 466km according to those figures you gave: Probably some moving sporadic e clouds in my opinion Ed. If so, then 144 MHz would have been open for DX at the same time.

If so, then 144 MHz would have been open for DX at the same time.

Does aircraft reflection work on the HF bands as it does on VHF?

It could have been one of those Angry Birds I reckon, fairly large undercarriages

If I can hear G0RQL and others on 14 MHz with a clear (and not a scatter signal) I find VHF is usually good for Sporadic e, so I beg to differ Richard.

Hard to believe when DD5LP was booming in 59+. That’s the magic of the shortwave.
I guess it was TEP with the Weißwurst-Äquator right in the middle between us.

I like the idea of aircraft scatter, but there’s so much traffic over DL that contacts of this kind would occur frequently.
I think a short sporadic e opening is more likely. From 1146 to 1152 I worked DD5LP/München, DF2GX/Friedrichshafen and OE8NDR/Klagenfurth. All were 59 and each qso there was enough time for some overs to wonder what the heck this is.

Hello!
the same anomaly happened to me, today.
I made one QSO at 14:02 UTC on 20mt QRB 400km report 56 for both of us, the propagation break off in a matter of seconds.
I have worked from open field 1200mt kx3 5watt antenna G5RV1/2 installed at T, 5 meter up.
iw0rqj has worked with vertical antenna. 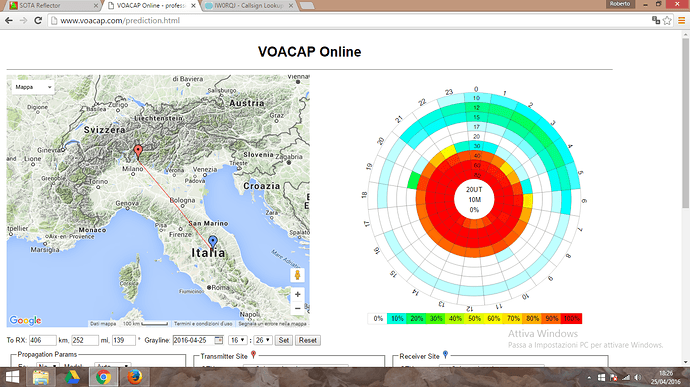 Right now there is an extensive opening on six, covering Europe from Portugal to Israel and up to the English Midlands - and I have not repaired my antenna yet!

I always associated Sporadic E with 10 metres and up. Never thought it could affect comms on 20m as well (if that’s what it was). Is it a factor of Spradic E that signals go from a consistant S9+ to nothing in a few seconds as happened at the en of my QSO with Pom?

Had few of those mainly summer months from Northern England Southern Scotland wales and Belgium and Holland last year and said before this could be a a form of Es but again it is short lived again with massive signals like Ed said you expect this form of prop on 40m.

Certainly not like back scatter like hearing Mike G6TUH working the polish team coming in strong at 5/6 and clearly off back scatter from other side of the country on 20m. I often hear and regular G0RQL on stronger round waves and G4OBK at times and others from midlands coming in clearly about S5 some days calling into European Sotas in Europe I often put down to back scatter. And that can be fun at times too finding the right direction find that sweet spot in WRONG direction to a short distance station.

Then you get the reverse effect on 40m when that HB9 sota came in around 900km normally and some times hear and work them but not at 5/9++ both ways and his signal appeared to be floating around like on Es a while ago man that was weird and not the normal.

We quickly learnt on FM and on 27mhz area when a strange noise came up and made you signal meter float up to 9+ you could be in for some good Es DX and the way the signal dropped and climbed like a yo yo at times was amazing.

Just love it when propagation breaks the rules and does it to show we don’t fully understand why it happens but it does. Remember listen to one Es once from Guam on FM on 27mhz was totally amazing and the amount of Europeans screaming back at him was well amazing we could hear even the guy in Guam was amazed. Turns out the guy in Guam was an engineers at one of the SW broadcasters and had dropped onto 27mhz to see what was about and he could hear Europe no problem. Then a team of DX.ers on 11mb were in Zimbabwe working Europe on SSB and then they could hear FM signals coming over form Europe switched over and worked many a station for 1 hour period.

I suppose these events are like planetery inlinements not often happen and rare but rare and interesting results that come out of it because of it.

Back in late 90’s I found I could listen to KTWR’s transmissions on 19mb in English From there Guam TX to pacific during Oct to March and wrote in regular reception reports even they were surprised after 2 years of this and two seasons of listening reg at a certain time.

Just love it when propagation throws a wobbly out of the norm and your there to work its conditions.

Never thought it could affect comms on 20m as well

One of the surprises (for some) that came out of the UK’s 5MHz experiment was the significant contribution of E layer ionisation to 5MHz propagation. Makes sense when you stop to think about it, though. I guess it tends to get thought of as a “10 metres and up” layer because its effect there is so noticeable when compared to normal F-layer propagation.

Of course this spoiled my complete explanation before. Despite this educational catastrophy this newcomer later became licensed as DF9IR.
From time to time propagation is good for some surprise…

The exchange above is interesting to any student of HF and vhf propagation.

I think the experts like Roger VK2ZRH would suggest that E layer propagation is more common on HF than is usually thought. It is even observed to affect propagation on 3.5 MHz, with deep QSB occurring on normally stable paths, due to interference between the E path and the more typical (higher) F layer path.

As I understand it, the spE reflections, like F layer, are frequency sensitive in their behaviour. They are also dependent on the angle of incidence. Depending on the density of the ionisation at the E layer, they may support propagation at up to 30 MHz, or up to 60 MHz (which 6m fans enjoy) or even up to 160 MHz (2m ops go nuts).

The observation of a specific distance on 14 MHz usually indicating a spE density that will also support VHF propagation is probably justified, however a more general observation of “any spE” on HF does not necessarily indicate any specific upper frequency limit.

Eg your usual observed 14 MHz lower limit to supported F layer propagation may be say 1000 km. When a station is heard at a distance of 800 km, that indicates some additional path is present, so propagation via spE may be extending up to 40 MHz. When the distance on 14 MHz drops to 600 km, this may indicate spE up to 80 MHz. At 400 km, it may be 120 MHz. At 200km, it indeed could be as high as 150 MHz. All numbers for illustration only.

So I would support Phil’s observation of a specific short distance on 14 MHz indicating predictable propagation on various vhf bands, while also agreeing with Richard’s general comment that 14 MHz spE is not a good indicator of 2m spE.

As usual, the devil is in the details.

Goes to prove one thing

If it appears on the spot, have a listen to see if its riding in to you.
Many a law written about propagation have been broken for me to work them, when its not possible in first place and yet it’s happening.

If its heard. Get in there

You just never ever know till you try.

Many a law written about propagation

Law is the wrong word. Propagation is entirely predictable and explainable if you have all the facts. Normally we don’t have the facts and so explaining what we observed requires guesswork etc.

If its heard. Get in there

I am not sure if that is particularly appropriate either.

Trying to work out why, old expression get in there my son etc could be related to lot of things like last heard it from my dad was playing darts