On Saturday the 24th, Antti, OH6FME and I activated Porttivaara, OH/JS-005. Peaking at 345 meters it is the highest summit of the Vuokatti fell area. We also got to use a rather special call, OI8AY/P on this activation.

For a little background, there are several amateur radio clubs within the Finnish military. These clubs have traditionally existed in the units that train signalmen. A few decades ago these were quite active and the conscripts were actively encouraged to participate in military amateur radio activities. I have heard that at that time there was even a special license class for a conscript radio amateur. Nowadays most of these clubs are not very active, while they still exist on paper. These clubs have special callsigns using the OI-prefix. This prefix is only available for military radio amateur clubs and some military-affiliated organisations and museum stations.

Ten years ago I did my compulsory military service at the Norther Finland signals batallion. I was not yet a ham at the time, but I applied for and was selected for HF-radio training. There I learned CW and the basics of operating HF radio. I also became aware of the military radio amateur station, as there were some old QSL cards and radio amateur magazines lying around in the CW training classroom. Our training officer was not a ham though, so there was no one to encourage and teach us to try also amateur radio. But anyway, that’s where I got the spark to eventually study for and take the ham exam a few years later.

As we fast forward to the present day, Antti, OH6FME is at the moment doing his service in the very same unit under the same officer, as I did. As Antti was already a ham when he went there, we talked about activating the old military club station. I was also in contact with our training officer, and we got his permission to bring the call back on the air. We felt that it would appropriate to do this in a real field radioman style, and what would be better for this than a SOTA activation…

When Antti also got a written permission to use certain military equipment in the operation, it was definitely time to go. We chose Porttivaara, OH/JS-005 as the preferred target. When I still lived nearby, I used to go there to ski with my family. The Vuokatti area is one of the most popular winter resorts in Finland outside Lapland. The cross-country skiing routes are excellent and kept in good condition. The Porttivaara (literally “Gate fell”) summit lies about 10 kilometers south of the Vuokatti skiing center when going along ski tracks. I had never been at the very top of the fell, as the skiing track passes it by about 500 meters, but I figured it was doable.

The original plan was to be QRV at about 11:00 UTC. Of course this went south…

As we arrived at the Vuokatti skiing center, there was a little surprise waiting for us. The same weekend there was a major open skiing race event, “Vuokattihiihto”. We learned later that there were almost thousand people participating in the race. This meant that for a few kilometers, we had to ski on the side of the actual ski track. After that, our route turned to a different direction, but it seemed that they had only prepared the tracks that were used for the race that morning. Normally they prepare all tracks every day, especially if any new snow has fallen on the tracks. The fresh snow got stuck to the grip wax a bit.

This stuff already slowed us down quite a bit. Then we arrived at the point along the ski tracks that got closest to the summit. We turned to the untouched snow. The temperature had been above zero on the days before but on the nights it still dropped well below zero. Because of that the snow could hold our weight with skis on. After about two hundred meters the terrain started to raise quite rapidly, so much that we had to take off the skis. Some people had climbed to the top with snow shoes at that point, and apparently that had worked quite well. But without snow shoes it was not the easiest task to climb a steep hill in thick snow. When the GPS indicated an altitude of 338 meters above sea level on a small opening, we decided to set our station there.

As we knew the CQWW WPX contest was on, we put up the dipole for 30 meters. Also this took its time, as there was snow almost up to the waist and the skis didn’t help. But eventually Antti sent the first CQ SOTA at about 12:40 UTC. He had only learned CW recently at the army, so this was his first SOTA activation using CW. After we had qualified the summit, we took a well earned break and had some hot chocolate and sandwitches. We then went back on air and worked 32 stations altogether. The radio we operated has the Finnish army designation LV 665 (LV for “lähetinvastaanotin”, transceiver), but some people may know it better as the Racal BCC39B. The OI8AY/P seemed to be a popular call, even though we weren’t taking part in the WPX contest.

After the pileup died, we attempted moving to the 80 meters band, to work some Finnish stations. In the end we had to abandon the idea, though, as the forest in the area was quite dense and finding a decent position for a dipole for 80 meters wasn’t going to be a very easy task in the thick snow. Instead, we packed our gear and started heading down to the ski track. Going down was a bit easier, but not much.

On the way back, we stopped to admire the views towards the east at the remains of a farm called Porttimäki. The only old building still standing was an old fireplace and chimney, built from soapstone. There was a sign telling how the farmer had also been a stovemaker and that there were a few small soapstone quarries nearby. Even though the farm has been abandoned for decades and the buildings have fallen, some local people keep the area open from trees, so there was quite a nice view, unlike from the summit, which was mostly covered with youngish trees.

The return trip went quite nicely, as the race had ended while we were at the summit. The ski track was quite worn, though. As we arrived at the car park, it was already getting dark and we started the way back to my parents’ house in Kajaani by car. My father had heated the sauna which is always an excellent end for an activation day.

Although not everything went according to plan on this trip, I think it was quite successful. Thanks to Antti for nice company and to all chasers for calling us!

Photos and a few videos are available here: 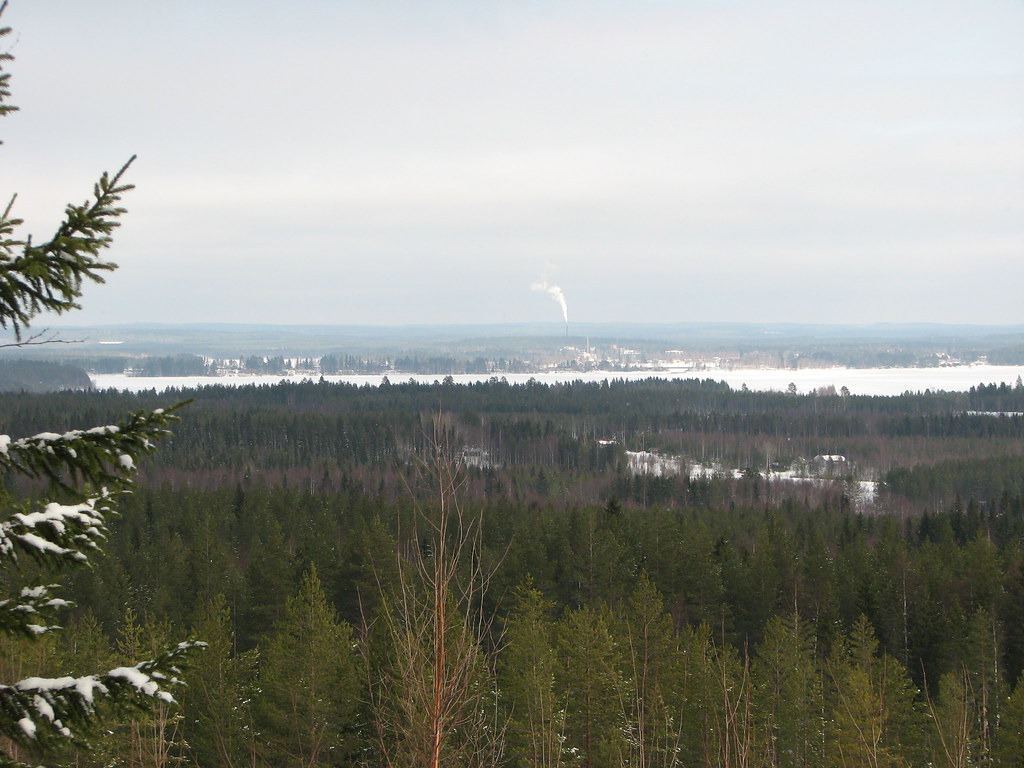 I see Jaakko already told everything essential about our expedition but I thought I’d still throw in a comment about the activation.

This was my first “major” activation. I call it major because it was the longest and toughest of my SOTA expeditions to date. First when we planned the trip Jaakko told me the length of the journey would be about 20 kilometers on skis. Since I am currently a conscript and our training includes a lot of joyous activity that involves wearing skis I was about to refuse.

Somehow Jaakko still convinced me and in fact I was even a bit excited about our activation. We would bring an old rare military call back to life! In the Saturday morning we packed our bags and packs and headed to Porttivaara.

I was a bit surprised how difficult it was to reach the top of the summit. In addition to first CW activation this was my first real winter activation. I didn’t imagine there wouldn’t be snow but when the snow was waist-deep the climbing was surprisingly hard.

In this point my ski boots and foot were soaking wet but I still managed to help Jaakko with setting up the antenna. Soon we were on the air and a deafening pileup was to come.

If climbing up the summit was hard, going back down shouldn’t be underestimated. Several times skis slipped and I fell over with my burden.

In the end the trip was more fun than I could have imagined. A huge serving of warm food and dry clothes after sauna were heavenly after a successful day. Thanks to Jaakko and all the chasers who make this worth it.