As a peak bagger, I like to find lists of peaks I can climb, then to go out and climb them. Last winter while waiting for drier weather I noticed that there were only six SOTA peaks in Pinnacles National Park, in central California. This seemed like a good list to tackle in 2017. I had activated two of the peaks last year, but my goal was to climb all six in 2017.

Only one peak, North Chalone, has a maintained trail to the summit. Two more, South Chalone and Hawkins Peak, have trails that get you close to the summit. The other three are off trail, and require various amounts of bushwhacking. Most of the vegetation in the park is chaparral, and can be extremely hard to bushwhack through. Hawkins Peak and North Chalone had been previously activated, but I was able to do the first activations of the rest of the peaks.

The highlight of all the peaks was on North Chalone, when two (critically endangered) California condors flew directly over my head, then landed a few meters away. 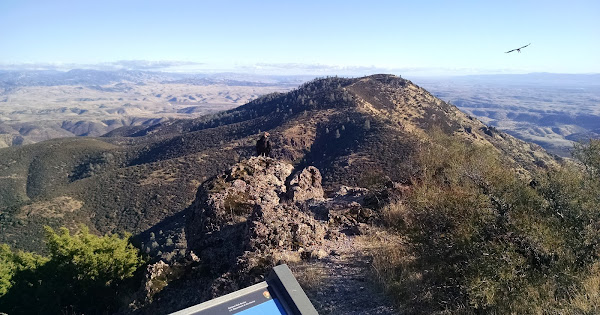 One on the rock, the other coming in to land. 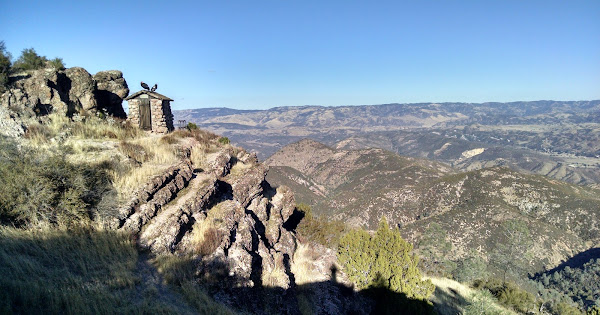 They later jumped down and sat on the roof of the pit toilet. 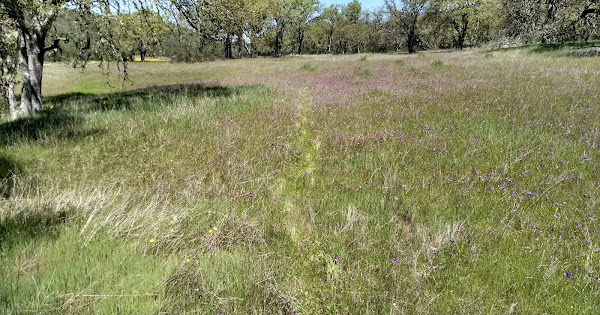 In the spring, the grass is green and the flowers in bloom.

It is very hot in the summer. Here I am trying not to melt. 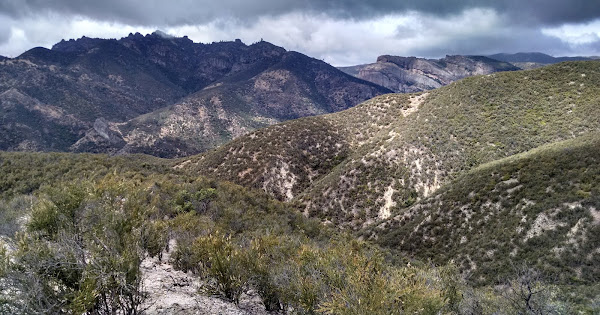 Hawkins Peak on the left.

Okay, it was hot - but it was a dry heat…lol. Congrats on bagging all peaks!

Thanks for the write up. Looks like I need to plan a trip to Pinnacles and start with North Chalone Peak. I looked at your summit posting - great pictures of the condors!

My 12 month Pinnacles pass doesn’t expire until the end of March, if you’d like to go down together.

Jeff - Thanks for the offer for a joint activation. I rather suspect that we travel at different speeds! When I look at the Pinnacles Park trails the hike to North Chalone is shown at 9 miless, and when I look at the topo maps I see a lot of elevation change (some of it quite steep). I generally travel at 1.5 MPH (or less) depending upon terrain. Since the round trip from the trail head to the summit is nine miles I suspect considering the elevation change that could be a 9 hour round trip, not counting time on the summit! I look forward to an activation with you, but probably not North Chalone! I will probably plan my trip to this summit when the longer days arrive.

By the way, I have a NPS Senior Pass which only expires when I expire.

Your SOTA adventures and your blogs make good reading and have given me some good ideas.

When Spring arrives and after the snow has melted perhaps we can activate Konocti together? If you give me a head start I will meet you at the top.

I’d be up for Konocti in the spring.
Maybe for Pinnacles, I should do both North and South Chalone, and you can do just North.