Pike of Blisco - first time HF for me

A quick outing for me today, to G/LD-024 Pike of Blisco, for the second time this year. The last outing was on a Summer’s evening, today it was 0°C as I parked up at the top of Wrynose Pass. 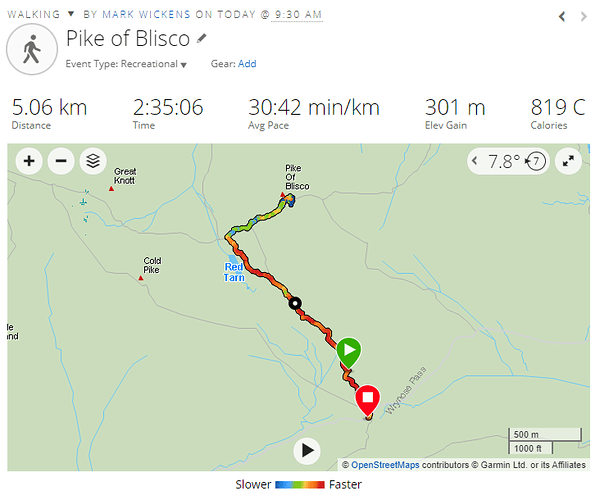 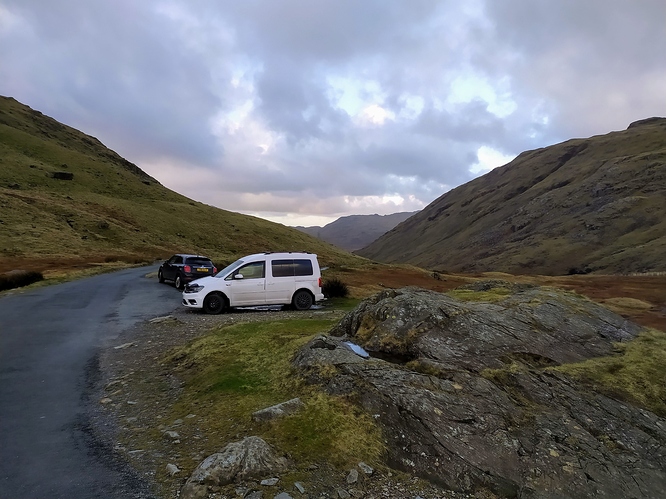 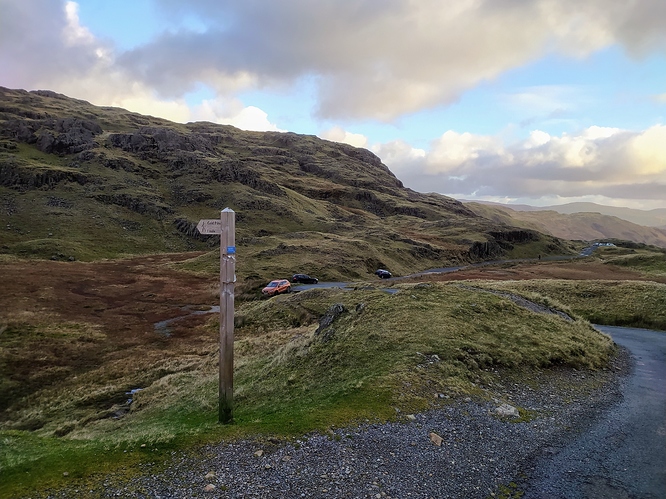 Today I brought along my new second-hand SuperAntenna. Aware of the ARLL contest I thought this might give me some alternative non-contest bands. It is also true that the summit of Pike of Blisco is predominantly rock. I’ve never tried an HF dipole here as I thought it would be hard work. So previous activations have been VHF only.

The walk in is very pleasant, around 45 minutes, past Red Tarn. The Crinkle Crags and Bowfell loom large to the West as you start the ascent to the summit. 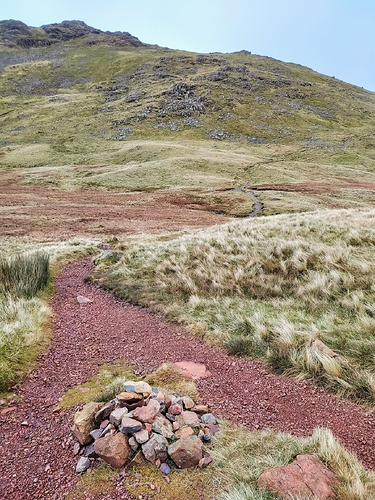 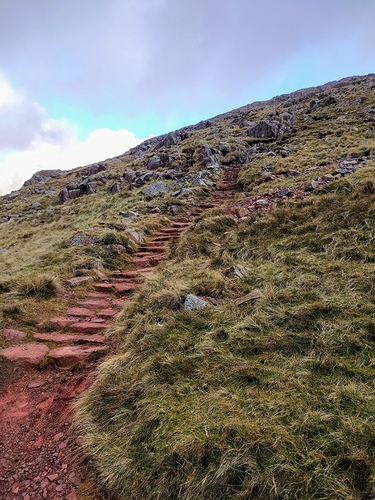 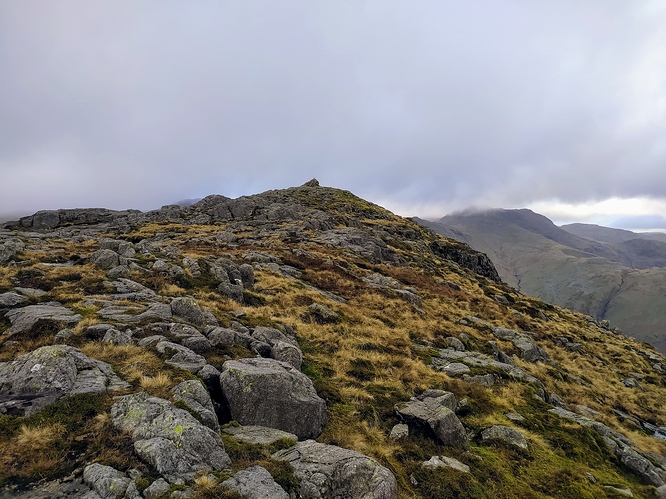 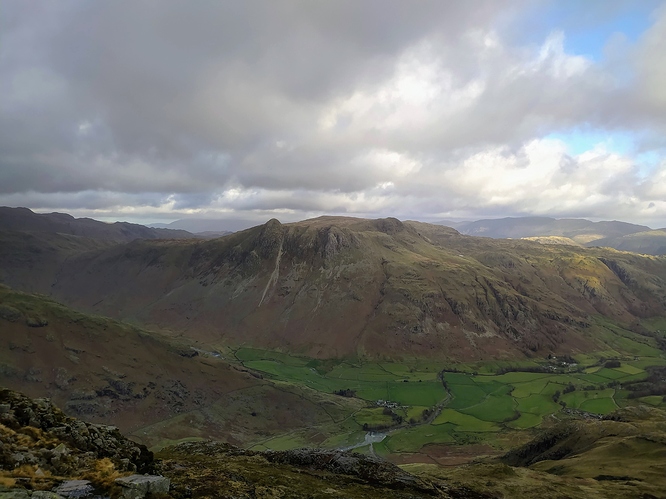 As you reach the summit you look down into the Langdale valley with all the additional height gained on the drive up to the top of Wrynose now available in the panoramic views to the East.

VHF activation was using the FT1XD with RH-550 telescopic whip. After FM I also did C4FM and got better general signal strengths, but I’ve never been able to conclude the mode works better than FM!

After VHF I setup the SuperAntenna about a metre away from me. I used the 12/12/15/17m radial set, spread out across the lee side of the cairn stones I was hiding behind, and down the drop off.

I thought 17m would be clearer given the contest and had a great run of contacts. SWR was 1:1. There was an activator on 15m but I didn’t get any responses to my spot. For 20m I carried on using the 17m radial set which seems to work really well with a slightly increased SWR. Was very happy to get 59 reports using this antenna. With the low tripod the antenna weighs about the same as the SOTABeams dipole and the 10m compact travel mast.

By the time I’d finished with 20m I was getting really cold - I now know the signs for onset Hypothermia and have learnt to act on them. The wind had picked up and it was making a massive difference to the air temperature. So whilst I would have liked to have tried 40m and 60m it was unfortunately time to pack up.

Thank you to all the chasers! One chaser who I didn’t get in the log called me on both 17m and 20m, callsign ending in NZI so if this is you I apologize! 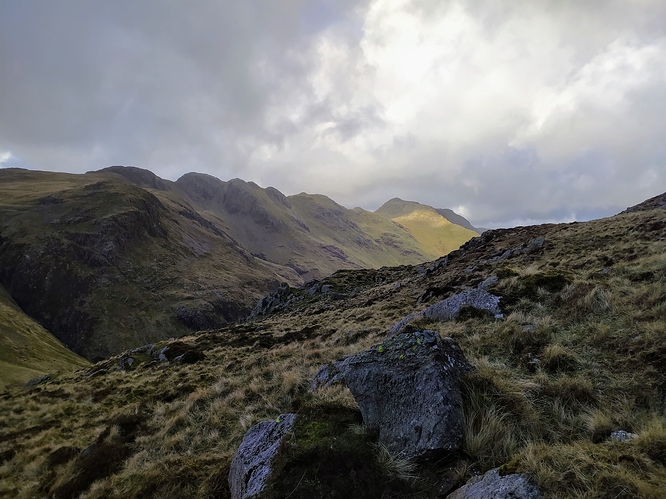 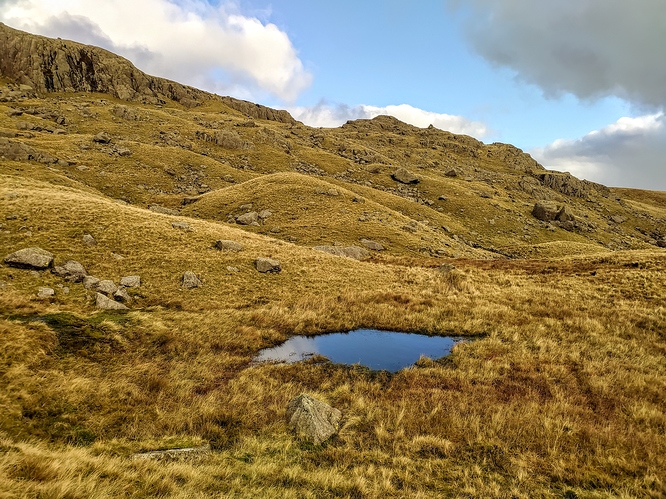 Great scenery Mark.
When this crisis is over I need to visit Lake district.

Btw. for C4FM there is a dedicated mode in the SOTA database call DV digital voice.

Thanks for the tip @OE5JFE. You do need to visit - although not up to the scale of the Alps you won’t be disappointed, I can guarantee it and I would expect you will be surprised just how much the Lake District packs into such a compact area.

Speaking of scenery I watched this video on Youtube last night on the Top 13 US National Parks and I have to say that Yosemite is really much more spectacular than I was expecting.

At the moment I can but dream of visiting both the Alps and Yosemite!

When this crisis is over I need to visit Lake district.

Bring a big bag of pounds (Sterling) to pay for the parking.

Due to a small majority of inhabitants of the UK in their desire to take the UK back to the 1950s, your big bag of pounds (Sterling) now equates to a significantly smaller bag of Euros than it did pre June 2016.

Just arrived home to see your report…nice one. Val and I nearly got blown away on that one…vhf activation only because of the wind.

69 in the log for me…very enjoyable morning and thanks to all the chasers.

Well done Allan on 69 contacts at this temperature!

I do have an 80m loading coil for the antenna which I expect to make it quite compromised, but having said that it has exceeded all expectations so far, and in this case was the difference between HF and no HF.

Nice haul of contacts there, considering you weren’t using a full size antenna. I’m thinking about a small vertical myself for the really small summits over here.
Pike o’ Blisco brings back memories for me: I camped at Red Tarn in 2002.

When this crisis is over I need to visit Lake district.

Cheap flights from Vienna to Manchester airport, then the train goes straight from the airport to Windermere. Don’t go in June, it’s even more rainy than normal

Unfortunately Bowfell is not a SOTA summit, I’m sure all devotees of the Lake District regret that!

One chaser who I didn’t get in the log called me on both 17m and 20m, callsign ending in NZI so if this is you I apologize!

Likely this was @GM7NZI - name of Ray, QTH Glasgow. Thanks for the report and some lovely photos Mark.

I agree that this could well be Ray GM7NZI. I had the same problem today and called for ‘station ending NZI only’ which solved the problem and Ray came back with full callsign. I’m just wondering if there is a problem with his PTT so if Ray is reading this I would suggest he checks it out.

Good to get you in the log today Phil with a little reminiscing of your activation of Mynydd Uchaf. I took a pic of the shed before I left the summit so I’ll post it on my blog tomorrow.

Just to add my voice for you to use the option DV when logging your C4FM contacts. I’ve recently been analysing DV activity from summits in 2020 compared to previous years - but it’s possible a number of these QSOs have not been counted if logged as ‘Other’.

This looks similar in many ways to a Buddstick, something I cloned and use a lot when the bands where in better shape. The point about these antennas is that their performance depends massively on their environment. Sometimes they work brilliantly and other times they don’t. It’s not just the ionosphere that affects how well they work but their environment. You always need to consider the antenna and its summit together with this kind of antenna.

There’s no stunning DX but for 18MHz SSB at the bottom / turn of the solar cycle, I’d be happy with that haul of contacts. If 18MHz was open, I always found my clone to be better than on 14MHz. Not surprising as the loading coil was out of circuit so the radiating element was nearer a 1/4wave. However, the environment does massively affect how they perform. Some locations you’ll get some good low angle take off and they’re “not bad” DX magnets. Some times they work but I always felt something was a bit naff. Where they become worse is when you add more and more loading coil and the length of the radiator gets shorter and shorter compared with the frequency. My mods to make mine work on 30m with the same length of radiating sections work, I get contacts on 30m but I never worked any real DX on it. Not surprising as a lot of the RF is going up not out. 40m and below and yes, you get contacts but now the environment has a massive effect.

As I’ve never had the dipole in inverted V (trapped EFHW) or centre fed link dipole deployed at the same time as mine, I’ve never been able to compare them at the same time. I’d expect the dipole to always be better especially in the broadside direction. We’ll never know how much better a full size antenna would have worked today.

I’m not trying to rubbish this type of antenna as I have something similar myself. As I said, I’d have been more than happy with that log today considering what the antenna is. As for weight, well a 10m pole weighs a shedload more than a 5m pole and I’ve always been happier to accept that my antennas on a 5m pole would be compromised compared with depolying them on a longer pole. I’m trading performance against weight and I’m sure there is a sweetspot somewhere between 5 and 10m where the antenna/weight compromise works best.

It will be interesting to see how well it works ion a variety of summits especially on 20m and up as the bands should be getting better. Do keep writing up when you use it.

Nice pics. WX today has alternated between nice blue and very dark grey skies with quite cool breeze. Doesn’t matter as I’m in one of the “confined to barracks” areas of Central Scotland

Well done, Mark!
Nice pic’s. Will be looking for you on 17M when conditions are good.

Updated. It’s a lovely walk from Crinkle Crags to Bowfell although the summit itself is a giant pile of rocks, another one where HF would be a real challenge.

Tom, I’ve resubmitted the log file with these entries recorded as DV.

Updated. It’s a lovely walk from Crinkle Crags to Bowfell although the summit itself is a giant pile of rocks, another one where HF would be a real challenge.

I’ve often thought that it is a pity that Bowfell does not qualify, because it would make the long horseshoe walk from Pike of Blisco to High Raise an attractive proposition with three SOTA summits, plus the natural starting point would be the Old Dungeon Gill, where the food is a brilliant as the beer!

Thanks for the great comments Andy, and your experience has been mirrored by myself when using the ATAS-120. What I’ve found is that you can very deep QSB during QSOs, which did happen during the activation yesterday but thankfully even though signals dropped from S7 to S1/S0 I could still hear to copy callsigns. That will have benefitted of course from the low noise levels on a summit. Drop off to the East was very significant. It is difficult to tell, given our Westerly location in the Lake District, how signals might be attenuated to the West.

I will try and do some experiments on both antennas when I deploy static mobile. The SunSDR2 has two HF antenna inputs. I’d be really interested in the results, I suspect the odd bit of DX would hit the vertical and pass by the dipole.

Of course that’s no reason not to do that great walk. You could still activate Bowfell for WOTA if radio is a must.

The one and only time Jimmy and I did G/LD-019, we did it as a round of 8 Wainwrights - the Langdale Pikes - from the New Dungeon Ghyll.

Pike o’ Blisco brings back memories for me: I camped at Red Tarn in 2002.

We camped here on one of the two occasions I’ve wild camped in the Lake District. You just have to be careful to pick your site as a lot of the grass is very boggy near the tarn. You don’t want to wake up afloat!

Don’t go in June, it’s even more rainy than normal

Actually, May and June are traditionally the driest months

. Welcome to the Lake District! Pot luck has as much to do with getting some dry activations in as anything else. That is the great benefit of living here, but you obviously also have to endure the endless glances out of the window on a Saturday/Sunday morning to the disappointment of drizzle once again.