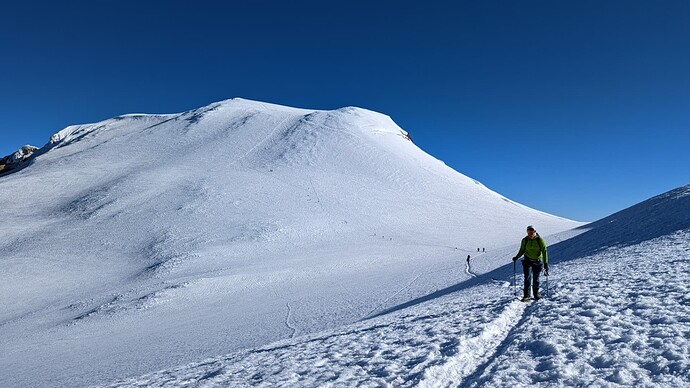 Yesterday morning my climbing partner, Casey, and I summitted Pahto / Mt Adams W7W/MC-001. The climb consists of a steep hike up 7000’ gain over 6 miles. Casey made the mistake I made last year and trusted the forecast of warm temps and 5mph winds-- he neglected to pack any winter gear: no insulated layers or hardshell. I convinced him to add his sleeping bag to his pack and that saved the trip for him.

We opted for an early start of 12:20am due to crowds and warm temperatures forecast. We first started hitting snow about 2 miles in and were on consistent snow about 2.5 miles in. At 7300’ we put crampons on for the first steep pitch of the hike. I’m not sure how this part of the trail is when the snow melts out, but we encountered some minor mixed climbing from snow to rock to gain the ridge.

As we continued up we tried to stay on snow as much as we could, but were forced to hike across some rock at lunch counter (~9500’). Here we got our ice axe out as the trail turns into a steep stairmaster of bootpack to the false summit. For this section I recommend hiking with 1 trekking pole and 1 ice axe. It was slow and steady on the bootpack until the false summit (11,500’). 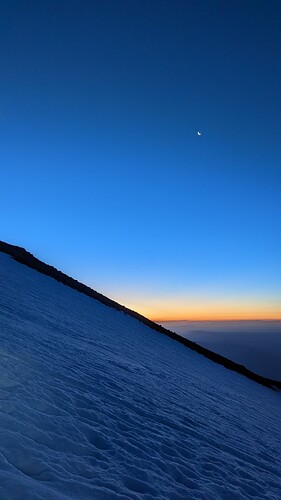 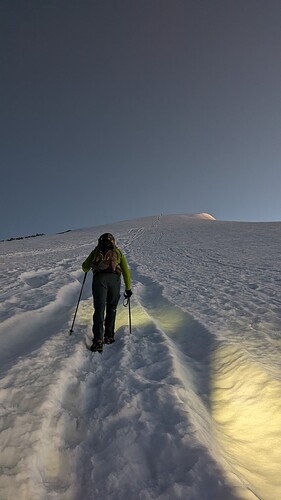 At the false summit we hunkered down in some dug out windbreaks to have some snacks before the final push to the summit. 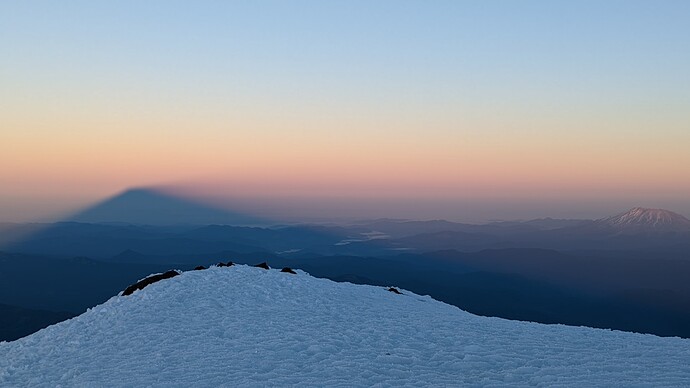 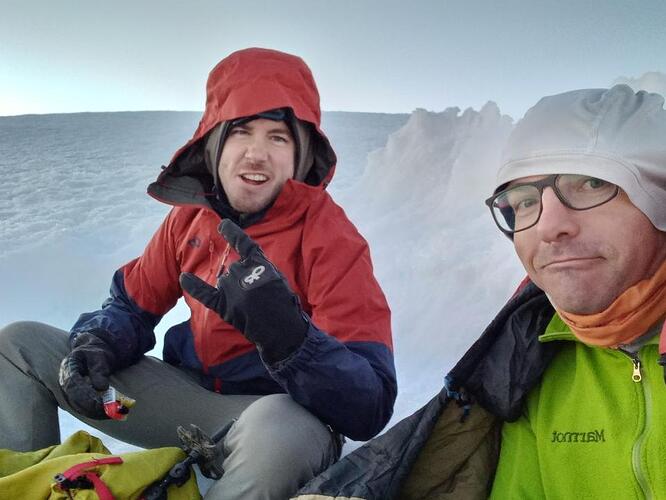 From the false summit we followed the bootpack below Pikers Peak and headed up to the summit. People who caught the sunrise from summit were on the way down. We missed the summit sunrise, but hey it was cold and the sun was welcome. I opted to lead us more on the ridge where the snow/ice ramps made for easy switchbacking. Casey let me go ahead so I could get started with radio. I summited just before 7am. 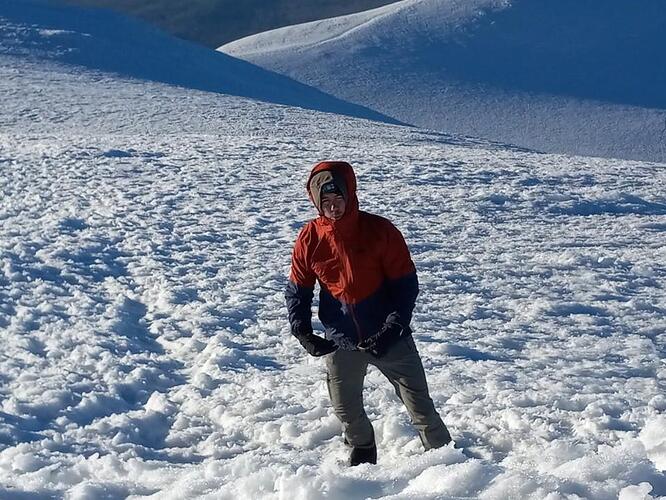 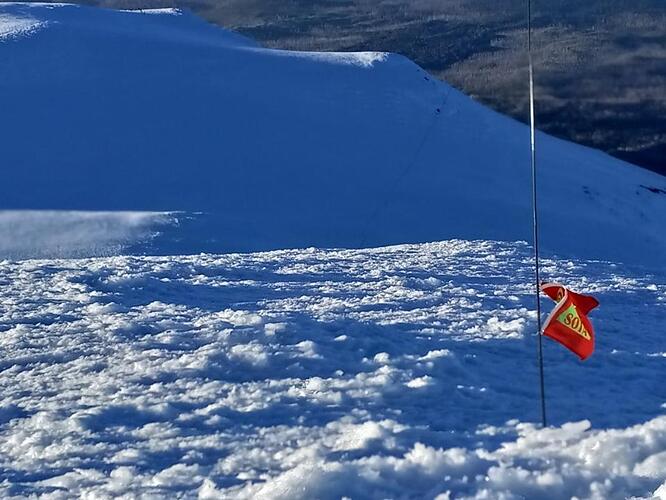 The summit had sustained 20mph winds (forecast was 5mph) with 30mph gusts. I managed to get a short mast (probably not necessary at 12000’) & EFRW in the air and hunkered us down in a little bit of a wind break. My cell service was intermittent and I got on 146.58 without spotting. My first QSO was with ND7Y mobile driving towards his summit for the day. Without a spot on 2m I managed a number of contacts including two 130mi QSOs in Oregon. After that I got on HF. I started on 40m cw, but got no takers. Guess I was too early for the “locals”.

20m cw was a lot better and I was the first to log QSOs on the 20m band for W7W/MC-001 in the database. Strong signals all around, but some QSB started to come in towards the end of my run. There were still some weak stations, but Casey was getting cold with only the sleeping bag and it was time to wrap it up.

I got on 2m again while packing and managed to get a spot out on 146.56 (there was some weird digital noise on .58) and got a few more contacts before heading down.

It was still icy on the summit, so we decided to hike down to the false summit in crampons. There we got ready for the glissading down. Crampons off, gaiters on, and my glissade diaper (now renamed “Scootie Bootie”, coined by a woman up there who thought it was awesome). It was still fairly early in the morning, so the first chutes were a bit icy and deep like a bobsled chute. It made for some mad braking to control the speed. Lower down the snow softened and made for great glissading. The final chute (down from that first steep pitch) had steep walls on each side and was a glorious ride. So much fun! 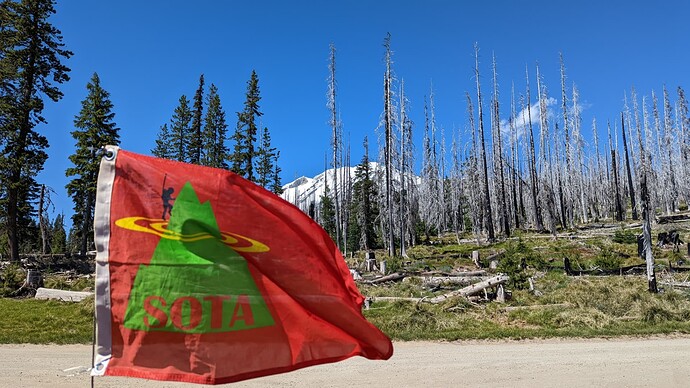 We took shelter from the sun in some trees and switched out the ice axe for trekking poles. That and my summit beer that I didn’t have time to enjoy on summit made the dusty deproach not too bad. By the time we were back at the cars the temperature was up and we were glad to be off the mountain so early (back at the car just before 11am).

Epilogue…
Then the real adventure for me started. During the bumpy drive down from the trailhead I noticed that my car’s battery light was on: not charging properly. I noticed that in neutral and idling it would go off and get a tiny charge, but driving down from the mountains the voltage gauge was dropping fast. I managed to coast to Hood River and pulled into an Autozone right as my battery died.
Thanks to autozone’s free loaner tools, I installed a new alternator, got a new battery, and a new serpentine belt. Not the funnest end of the trip after being up since 11:30pm. With fresh parts in the car, the hood came down, I thanked the super helpful employees at Autozone (they even let me use their rest room to wash up after), and I hit the road for home.

Nice one Tim. A great adventure, including the un-wanted one at the car parts shop!

When I saw your glissading video over on twitter I didn’t realise at the time it was a furrow made by the passage of many boots. Perfect, like a bobsleigh run!