Having started my life as a radio amateur with a special license (in Italy it was the one that was obtained without the telegraphy exam), which at times allowed to operate only from VHF upwards, 144 MHz has always been my passion, especially when I started doing activities in SSB. Unfortunately today I notice a certain silence at 144,300, so the contests are a good opportunity to make some QSOs on these frequencies.

A classic contest, in which we have often participated, is the APULIA VHF QRP TEST, which is well suited to SOTA activations. Always together with Andrea IZ0QYI, we mark the date on the calendar and we begin to think about a possible summit to be activated, until I see here on the forum @IW0HK post of his activation of Monte Costone [I/AB-007], and I I have the idea to reach the Sebastiani refuge at an altitude of 2102 m, stay overnight in a tent, and in the morning reach the summit at 2271 m “easily” in time for the start of the contest.

A few days before we begin to prepare all the material, tent, sleeping bags, radio, antenna … and it is at that moment that I realize that I have lost some fundamental pieces for the assembly of the Yagi 9 elements that we usually use for SOTA activations in VHF. Given the very little time we could devote to solving the antenna problem, we opt as an alternative, to bring two foldable HB9s.

Saturday afternoon we leave Rome, with an infernal heat, before arriving at Campo Felice, we take a dirt road (better to have a high car to follow it) that leads to an old bauxite mine, where a square has been created and he can leave the car to walk towards the refuge. To reach the Sebastiani refuge, follow the path C1, the indications show 1h45’, at a certain point you meet a crossroads for the path C1 bis, but we were told that it is a little more difficult even if there is less road to do, so we continued on to C1. After about 460 m of difference in altitude you arrive at the refuge, it took us 1h50’, the path is almost always uphill and towards the end there are steeper sections that put a strain on it, especially with a heavy backpack. 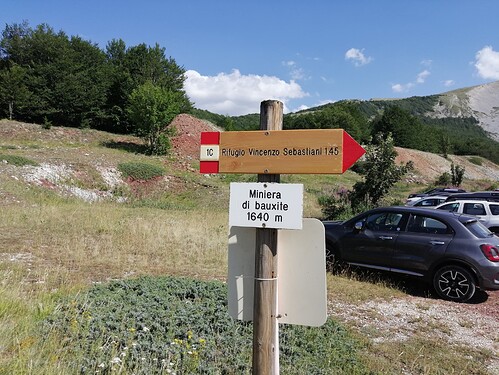 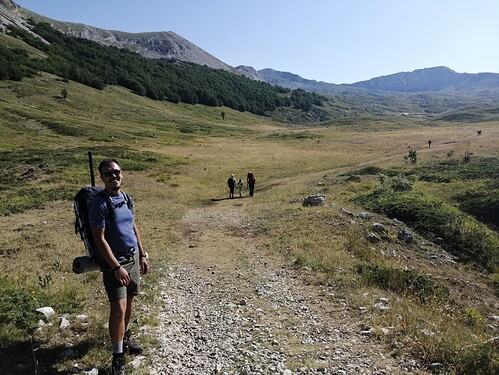 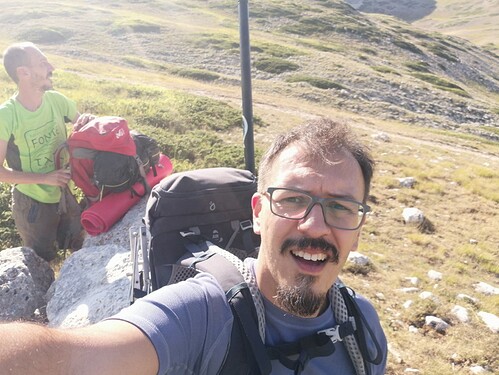 Set up the tent, we enjoyed a good dinner and spent a nice evening with the people who were there at the refuge to spend the night. We also met a Swiss radio amateur, whose callsign I don’t remember, and together we explained to the other people what radio amateurs do and played something with a small pocket receiver. 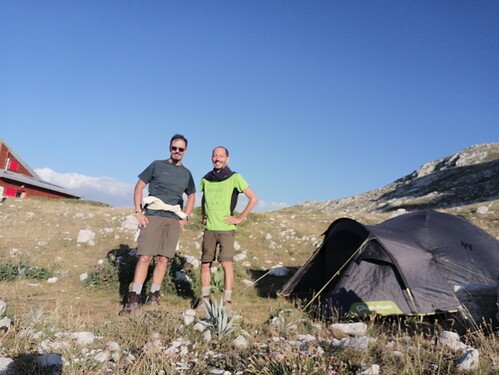 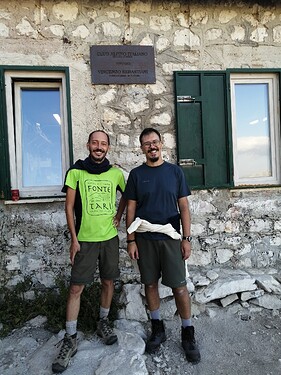 The night was certainly not the most comfortable of my life, and to think that in the tent I slept many times, but there was always a bump that did not allow you to rest peacefully. Just after 5 in the morning, I was desperately trying to get back to sleep, but between the light that was now entering the tent and the hum of bees darting among the flowers, I could no longer sleep. I wanted to go out, but I didn’t want to wake Andrea up, at the end, 10 minutes earlier than the scheduled alarm, I went out! 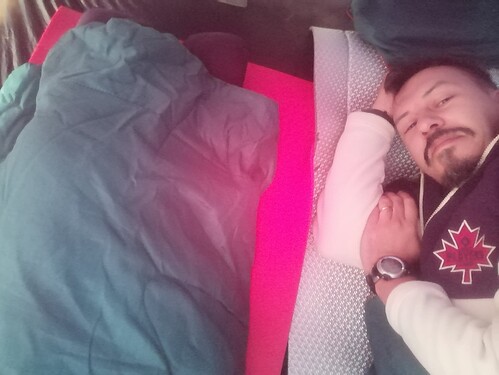 Finally outside we are preparing to dismantle the tent, have breakfast, place only the necessary in the backpack (the refuge allows you to leave some material and go to pick it up later) we set out for the top of Monte Costone.

The summit is right above the refuge, there are about 170 m of altitude difference for about 700 m of path, the thing that makes the climb more difficult (and worse still the descent) is the gravel that is found in the final stretch. 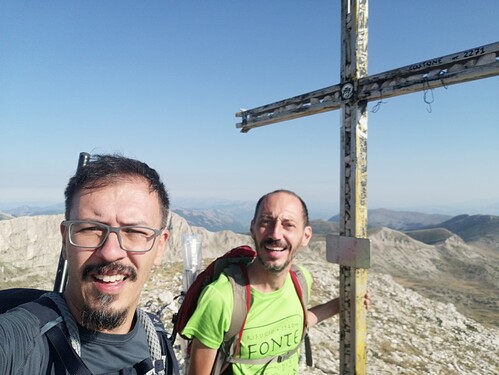 At the top, first we take the usual photo, and then we begin to understand how to arrange our equipment so as not to cause too much trouble, of course at that moment (9:00 local time) there is only us at the top. Loneliness does not last long because at some point we notice a Gryphon flying over our heads, unfortunately it was too high to take a decent photo with the smartphone (at least with mine) and then it moved further and further away until to disappear. After a few minutes Andrea sees it again, looking better around we see that there are others, one passes by us, it will have flown a meter higher than our position, it is so close that we hear the rustle of the air moved by its wings, it is a show that amply repays the effort made to reach that top, you will understand if we have not even thought about taking a picture.

Having completed the assembly of the HB9 on the fishing rod, using a wooden perch found at the top, Andrea immediately sets to work, with the connections that are not long in coming. Between one call and the next, he also improvises a small refuge to shelter from the sun. 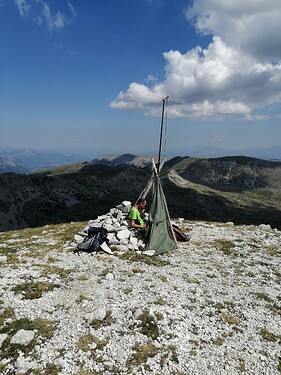 In the meantime, I operate in an almost impossible situation, holding the antenna with one hand and the microphone with the other. After the 4 QSOs to validate the activation, I start to take some pictures and support Andrea’s activity. 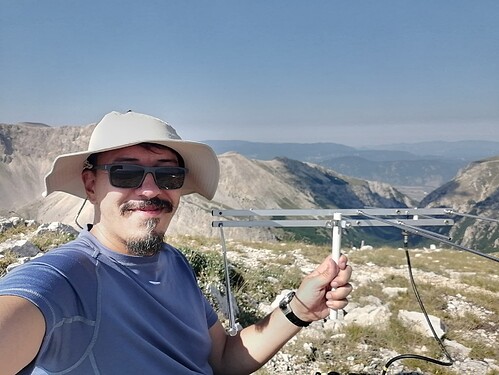 At 12:00 local time we decide to eat a sandwich and get off, we expect at least 2h30’ of walking to get back to the car. We decide to leave the radio on while we eat, and in fact between one bite and the other Andrea logs another couple of QSOs.

Once everything has been disassembled, we move towards the refuge, where we recover the material we had left behind, some water and set off towards the car.

The road is all downhill, and my untrained legs begin to feel fatigue and struggle, but we continue to descend with a good pace, the sun is covered with clouds and it is not hot.

Once at the car, we finally get rid of the weight of the backpacks, allow ourselves five minutes with our feet in the air before changing shoes and have a little refreshment. Meanwhile the clouds that previously covered our path have turned black and thunder can also be heard, and after a few minutes big drops of rain reach us too, luckily we are already in the car.

We go home, certainly tired, but happy with the wonderful experience, and satisfied with the results obtained. Andrea logged 16 QSOs of which 3 S2S (I0LYO, @IW0HLE, IU0LII), I stopped at 6 QSOs, also me with 3 S2S, practically the same, but it’s nice to see that the contest has pushed others to go to the mountains, not just us.

Hello and thanks Roberto and Andrea for sharing your great report and photos. I am glad you both had a fanastic time.

cheers to you both

Very nice report Roberto ! Staying overnight in a tent makes it a real adventure. Antenna in one hand and the mike in the other raises the question how to log… have the same issue usually. 73 andy