Having bailed out on G/CE-005 and suffered the wet and the wind on G/CE-001 on Monday, it was with some tripidation that I detoured to G/SC-008 this morning, for an unalerted activation - half expecting to abort due to the weather

By the time I finished after just under two hours on scene, drenched, I was torn between the emotions of “why the heck do I do it” and satisfaction on a job done.

Opening up on 2m SSB got the expected wall of silence, but after moving to 2m FM I quickly got the four required entries in the log, with G4STH and G0TQZ in the warmth of their shacks (59 each way) and G8DDY/M walking the dog on the Isle of Wight (which took a bit of work getting a 58 report, but only able to give 52 in return)

But most memorably, the fourth entry was F4ERR/MM off the Cotentin Peninsula, entering the harbour at La Cité de la Mer, with a respesctable 53 report each way

Having qualified the hill, I then tried HF properly for the first time on SOTA, dialling in 7,148.00MHz… G7MYI, M1EBV, G4YUM and G4OVI rapidly went into the log, before conditions deteriorated and I sought refuge in the car.

No real DX, and amusingly enough, two of the HF contacts (G7MYI and G4OVI) were the closest to my location.

An enjoyable/satisfying time… but the question still begs to be asked - why the heck do we do it?

Because its lovely when you stop?

… but the question still begs to be asked - why the heck do we do it?

Simple - because we love the sense of achievement Andrew. If you think you were wet on SC-008, come on an activation with me and I can usually guarantee you’ll get a soaking! Mind you, I’ve heard that there is some talk behind my back that I’m losing my touch as far as bad WX is concerned.

P.S. Even the especially bad activations are still there in my memory to be “enjoyed” over a pint of real ale in front of an open fire in the pub. 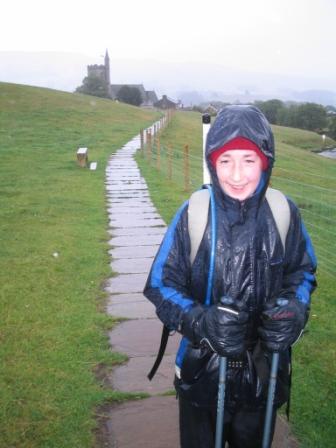 It’s another case of “This will have been fun” to add to those many and various self-inflicted tasks one does, at the time, with gritted teeth (or whatever…)

Whatever you do, don’t mention White Hill SP-006 to Paul G4MD… that was in the pre-Paramo days. He still shudders at the thought!

BTW, did you hang Jimmy out to dry when you got back

It’s another case of “This will have been fun” …

As far as I’m concerned, SOTA activations are always fun Rick. I can’t think of one that I’ve not enjoyed in the past four and a half years, even Snowdon in 70mph winds and driving rain was fun. Mind you, there was slight gritting of the teeth on that occasion.

Experience of temperatures between -10C and +32C, sun, cloud, mist, dense fog, rain in all its guises, sleet, snow and (my favourite) hail has been an intrinsic part of activating. There has never been a dull moment.