Open letter to our fellow chasers

Please be kind and read it.
Thank you,

Well said. In VK we very rarely have deliberately caused problems. I know it’s different in the North so a reminder on procedure from time to time is good. I wish you luck with getting better behaviour.

Mikel: I find the tone of your letter somewhat pedantic, overbearing and unnecessary. These are standard good operating practises for any type of HF operating and to reiterate them here seems unnecessary. I have never experienced poor operating by any of the chasers who have chased me over the 4 years I have been involved. Admittedly, I only operate SOTA HF CW and not SSB and from the Pacific Northwest - so it is probably not as densely populated with chasers as it would be in Europe. Regardless, it seems to be a complaint screed.

Sometimes an old fashioned schoolmasters approach is called for.

Similar points promoted by the IARU -

Pedantic, overbearing and unnecessary?
First of all, he doesn’t flaunt what he knows, which is why I don’t see pedantry.
Second, each strophe begins with “Please”, therefore I don’t see it as overbearing.
Third, the mistakes he mentions have unfortunately been repeated for years and I DO see this letter as necessary.
If you look at his log in SOTADATA or SOTLAS you can confirm that 70% of his activity is CW.
And doing the QSO on CW takes much longer than on phone, can you imagine what this means when you have to repeat unnecessary things when for example your fingers are frozen? Or You only have a very short time to activate?

I think that is very well written. It’s polite and to the point. And it is necessary. I get frustrated when activating on CW to be inundated with loud calls all at once. It’s great to be on the receiving end of a pile-up but a bit of patience by the chasers would actually make the whole process work more quickly.

Reading through the open letter I was immediately struck by how irrelevant it was to me as a phone operator. CW comprises about 40% of all SOTA contacts, its a minority - a big one, but still a minority. Bad operating is all too common on phone, too, but a similar open letter to phone chasers would read very differently. The biggest problem that I see is that phone or CW, the minority of poor operators are probably bad at reading, too!

Please, don’t transmit exactly on the same frequency than the activator. He will only hear a continuous tone. Move your dial just 100-150 Hz up or down, and your transmission will be clearly listened

Call me Mr Thicky but I don’t get this bit. I know someone [on another SOTA thread] suggested it can be an advantage to be a bit off frequency in a pile-up so that the activator can more easily discriminate your signal from the ‘crowd’ by having a higher or lower pitch. But the rig should give you the correct audio pitch [selectable on most rigs] if the chaser is on your exact frequency. Am I missing something?

Am I missing something

Yes, I think. Several stations calling at once with the same pitch will merge together, stations will not be synchronised so that some will fill the gaps in characters from others.

I get frustrated when activating on CW to be inundated with loud calls all at once.

Remember that they probably cannot hear each other! Of course they will all call, they want the contact, they want you to qualify, they want to get their contact before the propagation changes, and at the back of their minds will be the thought that you might be one of those “four contacts and outa here” types!

I was immediately struck by how irrelevant it was to me

advantage to be a bit off frequency

Modern synthesised rigs are so accurate in tuning that if everyone tunes to the spotted frequency, everyone calling will end up within a few Hz of each other resulting in the person hearing these stations as an almost continuous tone. If people go 5-150Hz up/down from the spotted frequency their tone stands out from the rest. Roy G4SSH was champion at that and he had a distinctive call, the di-di-dit di-di-dit di-di-di-dit a 100Hz high really, really stood out.

What annoys me is people calling over the tail end of a QSO, the exchange of 73 etc. I hear one SOTA activator/chaser do this regularly, he is champion at this, nearly always calling over then end of my QSO partners’ final. Only on voice, he’s fine on CW Had to be a he because I’ve never heard poor operating standard from YL ops.

I was confused by the phrase ‘continuous tone’ but understand it now you and Brian have explained the context. Indeed, I suffer from this a lot during pile-ups. I suppose once you have 2 or 3 sets of same-pitch Morse superimposed on each other there’s no way for the brain [not just my old brain] to separate them especially if sent at about the same speed.

What annoys me is people calling over the tail end of a QSO, the exchange of 73 etc

Yeah, think we all hate that.

I think if chasers took just this one request, then most of Mikel’s other issues become manageable. It’s not too difficult to differentiate callsigns if they are a few dozen Hz apart.

Firstly I agree with all of the points, except the frequency one.

I operated a KD1JV MTR during the days that Roy G4SSH would call me. I always found Roy quite difficult to copy until I’d messed with the RIT to bring him on to my preferred RX tone frequency. Roy was outside of my passband!

I have suffered from poor operating practices during my most recent activations, some from ops who should know better.

Roy was outside of my passband

Colin, is the passband fixed on the KD1JV MTR? I used to have my KX2 filter set down at about 300Hz until Guru @EA2IF suggested I widen it to accommodate chasers deliberately calling a bit off my frequency. Now I set it to about 3000Hz unless there’s a lot of QRN or strong adjacent-frequency QRM.

Actually it might be a generational thing, but I would feel very uncomfortable with not prefixing an over with my callsign. Back in my SWL and early ham days it would have been considered liddish to omit this little formality. I can understand it as streamlining a CW contact and I hear it a lot on phone, but for me it goes against the grain. Would I do it if I dipped my toe into CW? Perhaps.

Now that “call once”: how long should a silence be after that first call if you don’t hear the activator again? Has the skip changed? Has he gone home? Has he QSY’d without announcing (it happens sometimes, at least on phone!) Very often on phone - and particularly on FM - its a finely judged second call (or late first call) that gets the contact.

) or ignoring a call for a partial etc, some things are universal, but as I said, I felt that the open letter was written from the POV of a CW operator, for multimode there would have been added clauses.

Yes, the bandwidth is fixed, the IF filter width is designed for CW and also the AF section is optimised for CW reception. The result is a very quiet receiver. The AF gain can be a bit marginal with headphones that aren’t so sensitive. There’s no volume control either, the audio level is fixed, with strong signal limiting. 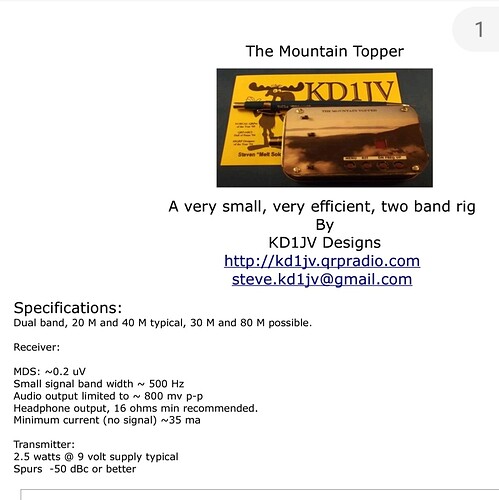 This is always a good reminder to brush up on practices. The problem is, we read these. We are involved. We get it. It is the few who don’t read that muck things up.

Two issues come to light for me.
Since I’m solely on 2M and an HT. I can’t shift frequency That’s where patience comes in handy. While all the other QSO are occurring, I’m collecting Call, summit and time for my log. I can wait, and I hope you’ll still respond when the pile-up clears and before you leave the summit. When it’s damned cold and the wind is 20KPH, I get it if you have to leave some of us wanting. Safety First.
The other point is not repeating my Call Sign if it has been confirmed. I don’t hear the operator on the other side of the mountain and it should be made clear who the responding operator is. If someone steps on me and provides information the Goat’s logs are in error The similarities between MMZ, MNG and NMB can be hard to distinguish in that 20K breeze. There again, listening helps. Most Goats in my Association know me, my voice and will identify me by name – they identify most chasers by name and that clarifies much. Two ears, one mouth.
73
Victor KI7 Mike Mike Zulu
Beautiful Downtown Everett