On the 29th and 30th of January 2022 we will be going on a dxpedition to four Belgian SOTA peaks:

From the center of the Netherlands the road to Signal de Botrange (ON-001), where we will be operating on all applicable bands. After activation we will drive to Iverst (ON-009). After that activation, the day will probably be over, and we will move to check in at the lodge. The next day after breakfast the first summit to target: ON-011 activating Sur Clair Fa and after successful activation moving to the final destination Baraque Fraiture (ON-010). Taking us home to The Netherlands again.

HF and VHF/UHF bands will be used, according to propagation and band: preferred bands:

We are very excited to hear and see you all in the log where applicable. Although it is a portable operation, there will be QRO and QRP operation as the situation will allow. Thank you for s2s or chasing and 72/73 ! (if you wish to join us, please let us know so we can provide coffee)

We like to thank all that made this trip possible, big and small.

AAR on 4tops and a Radio was a big success!

Allthough we activated 3 of the four tops (sur clair fa was unreachable due to sever bad road conditions) you accomplished 31 qso’s with ON/pd0sot in very busy band conditions. the almost freezing snow blowing wind on top of Signal de Botrange made the start a massive endeavor. After the first activation we moved to “Iverst” next to the German border and that activation was super fun, starting out on the 20m band and moving to 40 meters quickly the pileup was immense. At times 4 to 12 calling stations and lots of good contacts. Although all CW equipment was available, we operated mostly on voice. It was also the time for UBA contest weekend and the bands were severely packed, worked a couple ON stations too!
After this activation we called it a day and went to the lodge where swimming and dinner awaited us. of course, we tried some cw in the evening but no luck there, must have been “no activation-zone luck”

The second day we drove to sur clair fa, but the access was inhibited by bad roads and very muddy fields. As the location drew nearer to the summit, the conditions deteriorated towards the level of dangerous, and we decided to move to Baraque Fraiture.

On this summit we activated and went for the 40-meter band , later in the day the response to our spots was equally substantial, like the day before. although the plan was to do some 160m CW after the activation of ON-010 the decision was made to progress towards the Netherlands with a 3-Hour drive ahead. That went very well and while the sun was shining most of the journey the feelings that we had a good, productive and fun SOTA weekend what residing with us both.

Although sadly we did not make contact with the US / Winter field day stations or and my friends from the SOTA community were missed, we decided that the logistics and activations were fun and rewarding.

Thank you chasers supporters and goats. Hope to catch you on another run soon ! 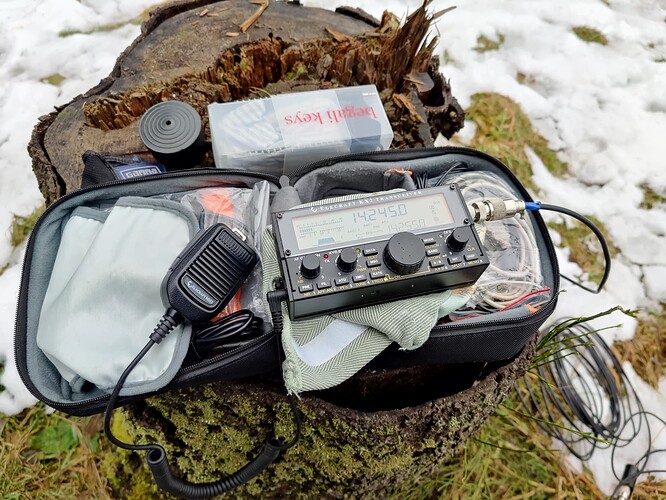