My other recent activation was Raappananmäki, OH/KU-051. For our first summer holiday week, YL and I went to the north, to visit my parents in Kajaani. There were a lot of activities, such as playing with my 9-month-old nephew, picking blueberries at the summer cottage and so on. But some amateur radio activities were in order as well and I asked my father to join me on a SOTA activation.

The original plan was to activate both Raappananmäki, OH/KU-051 and Kivesvaara, OH/KU-052, as they are only 4 to 5 kilometers apart. The summits are located in the municipality of Paltamo, about 50 kilometers from the city of Kajaani along roads. We would have parked the car quite near the summit of OH/KU-051, walked down from there and to OH/KU-052, activate it and then walk back down and up to activate OH/KU-051. I already set the alerts according to this plan.

However, the weather forecast was a bit worrying, as it showed possible heavy showers and thunder for the Kainuu area. On our way in the car we could see dark clouds in the distance, so the decision was made to just do a short activation of one summit and try the longer hike some other time. We parked the car to a junction of a smaller gravel road at a point where Raappananmäki starts to rise and walked up the Raappananmäentie road. This road goes almost to the highest point of the summit and then down again and ends right in the lake Osmankajärvi. But we didn’t go to the lake, but turned to a forest road southwest that went past a small link mast to the highest point of the summit.

My father did his army service in the 70s as a signalman. Back then quite a few conscripts were still trained to operate HF radio and CW. He hasn’t used the skill after that and does not have a ham licence, but he had not forgotten how to throw an antenna weight! Because of that, I was on the air in record time after arriving at the site. So I could start making QSOs while my father concentrated on the delicious blueberries.

After self-spotting by SMS (thanks, Andy!) there was soon quite a pileup on 20 m CW, I’d say even more than a week earlier in OH/JS-054. Unfortunately there was also a different kind of local “pileup”, lots of mosquitoes and black flies, that is. As soon as I sat down and hit CQ SOTA, they arrived out of nowhere and started looking for every possible bare spot of skin. I made eight contacts altogether. At times it took a while for me to pick a call from the pileup, but my ears are in training.

After those eight contacts, I had to quit, though. I could’ve taken a bit more bites from the insect department, but what was more worrying were the dark clouds gathering in the sky. So, I had to disappoint the rest of the hungry chasers as we took down the dipole and made our way back to the car. Just after a few kilometers of driving, we saw that the roads were wet there and quite soon after we arrived at our parent’s house in Kajaani, water started falling really hard. It didn’t last very long, but it was certainly nicer to watch it under the roof of the verandah. So, the OH/KU-051 - OH/KU-052 -tour will still have to wait, but I’ll do it, sooner or later!

On the next day, YL and I came back to Jyväskylä, but stopped in the city of Kuopio on the way. In the afternoon we climbed to the Puijo hill, to enjoy the views in the well-known Puijo tower. Puijo is actually OH/JS-030 and has been activated by OH7BF last summer. I only had the HT with me and there wasn’t that much time to spare. I tried calling a few times on two meters, but got no reply. But maybe I’ll also climb Puijo again some day… 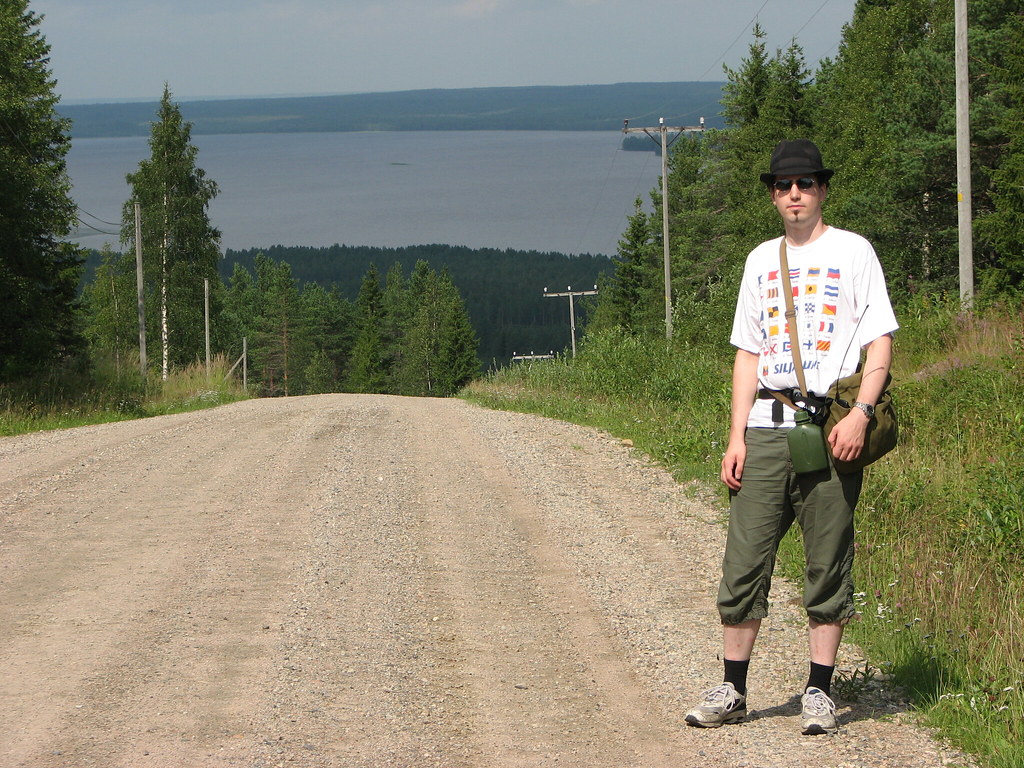