As the weather forecast for Saturday, 4.6.2011 looked very promising, we decided to take advantage of it by the means of a SOTA activation. For quite some time we had talked about activating OH/JS-058 Lullinvuori, which is located near the southern end of the Muuratsalo Island in the Lake Päijänne. Muuratsalo is famous for the summer house of architect Alvar Aalto, who experimented many techniques there that he later used in several more public buildings.

Eventually it was three of us that went, Antti, OH6FME, Teemu, OH6FYR and myself, OH6FQI. For Teemu, it was the first SOTA activation. Teemu and I chose to go by bicycle. Antti would have joined us, but his bike was in service, so he had to use a car this time. The weather was really nice for a bike trip, mostly sunny but with some wind to keep it from being too hot.

We rode through the suburbs of Jyväskylä, the old factory community on the Säynätsalo island and a few other islands before reaching Muuratsalo. These islands have some really nice views and very expensive looking houses. The nature shows many signs of the past ice ages, with large, smooth rock areas, magnificent boulders and steep cliffs.

Teemu and I reached a turning point at the end of the gravel road at some time before 10:00 UTC. Antti joined us shortly after by car. We took our equipment off the bikes and car and started the climb to the top. The top of the summit was not that far from the end of the road, but the terrain was very difficult. The forest had been cut down some years earlier, and the area was now densely growing small spruces a bit taller than us. So in no time our legs and arms had scratches all over them and our clothes were covered in spruce needles.

Somewhat surprisingly, this was also the first SOTA activation, on which we actually had to utilise some rock climbing skills. On the way to the top we came across two steep cliffs. The first one was just a few meters with trees and ledges to climb, but the second one at least five meters of smooth rock straight up, so we had to go round a bit to find an easier spot. Eventually we made it up safely, but it took quite a lot more time than expected.

On the top there was a small nature reserve with some mighty spruces. We decided to set up our stations in the edge of the nature reserve where there were some trees suitable for our dipoles. There were quite a lot of trees lying here and there, fallen down by the wind. That and the swarming mosquitoes slowed down our work, but we got one dipole up and Antti, OH6FME started working 14 MHz SSB while Teemu and I started raising the second dipole.

That’s were we ran into some problems. The first dipole has marked lengths for different bands and we assumed we could use the same lengths for the other one as well. But that wasn’t the case. The dipoles had different kind of baluns, and apparently that had a significant effect on the tuning. We tried adjusting the lengths for a few times, but without a proper SWR meter or antenna analyzer we weren’t really getting anywhere.

So, we decided to take turns with the one antenna that was up and working. Antti already had quite a log worked, so I plugged the feeder to my FT-817 and started working 14 MHz CW. There was some QRM and QSB, but I managed to make 8 contacts. After that we moved the feeder back to Antti’s FT-857 and after some encouragement by Antti and I, Teemu, OH6FYR took the mike, called out his first CQ SOTA and made his first ever QSOs on HF.

We tried calling on 145 FM too, but made no direct contacts there. That was to be expected, as we hadn’t spread the word about our activation locally that much. Also, 4th of June was the day schools ended this year in Finland, so many people here were attending graduation parties or just enjoying the sunny day out of their shacks.

After 14:00 UTC we decided to start packing again. For the climb down, we took a bit different route to avoid the steepest cliffs. The route was a bit easier, but still quite dense enough. At 15:15 Antti started his car and Teemu and I were back on our bikes for the ride back home. The ride back went fine and after getting ice creams and water refill at gas station in Säynätsalo island, we were back in Jyväskylä at 16:45 UTC.

Despite the small problems, we decided that the activation was a success. Everyone got their required contacts for the activation points and Teemu got to open his score list. Many thanks to our patient chasers! Now we’re hungrily waiting for the next trip…

Some photos can be found here: 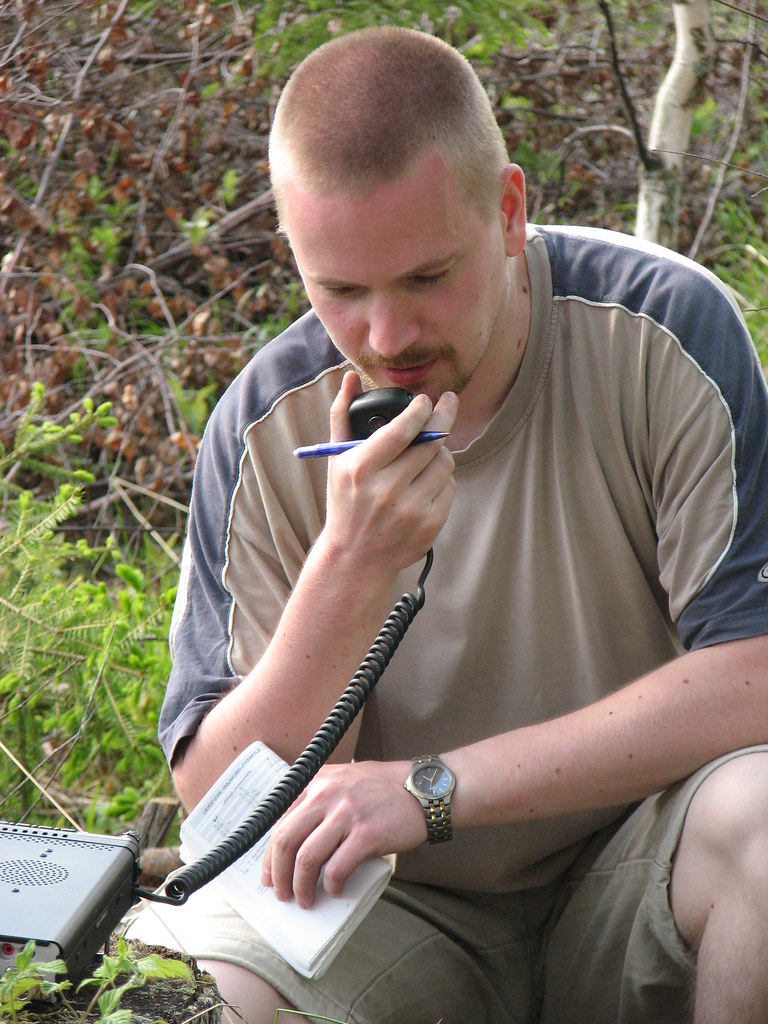 I use a hat with a mosquito net. You can find those from outdoor shops (e.g. Prisma). Also gloves and jogging clothes, where I try to close all the openings. Still some mosquitoes manage to get through. It is also good to check ticks (punkki) after the activation.

The map shows a path almost to the summit, so with more careful orienteering no need to climb cliffs. I had a similar problem in April at F/AB-405 Jorat 1830 m, since the path was not marked on the 1:25 000 topo map. So I did some unnecessary climbing there. Better to avoid that. Fortunately most of the summits have clear paths and signs here.

Thinking back, it would probably have been a better idea to approach from the path in the southeast. That would have meant more walking, as the thinly marked path probably isn’t suitable for ordinary hybrid bikes. But maybe we’ll try that approach next year…

There were a lot of mosquitoes, but the level was tolerable. I have quite a few bites on my arms, but they don’t seem to be the real ichy kind. Or maybe 29 summers of heavy exposure have given a bit of immunity.