Our first SOTA activation is now happily over. I can say that it went better than expected and we had a great time up on Kanavuori, OH/JS-057. The weather was very good for SOTA activity. It was mostly sunny with a few clouds here and there and the temperature was around 23 to 25 degrees C. The mild wind was actually welcome keeping the amount of mosquitoes and black flies at a tolerable level. I left my workplace after 13:00 UTC by bike.

Our original plan was to be QRV at 14:15 UTC, but we got delayed for almost an hour. Antti came to the root of the hill by car and was stuck in a traffic jam. One of the “attractions” of the Vaajakoski area is one of, if not the worst bottleneck on Finnish highways, the Vaajakoski roundabout and its surroundings. This time it got jammed because of some pavement works nearby and I heard that there was some minor traffic accident as well.

At about 14:20 UTC we were finally ready to start the actual climb up the rocky hill. There is a clearly marked path and some rope hung on metal poles to help the climb. There are also some signs telling about the natural sights of the area. Instead of going to the actual top of the hill, we found a nice ledge about 180 meters above sea level, with views towards Vaajakoski and the centre of Jyväskylä. After hanging the dipole up from two friendly pines, we powered up my FT-817 and I sent my first CQ SOTA on 14,057 MHz CW at about 15:10 UTC.

Soon I had a healthy pileup with many strong stations to choose from. Thanks to everyone for keeping the CW speed at a moderate level, which I could handle. There was some QSB, but I got all the reports nicely in my log.

After 11 CW QSOs, I laid down the key and Antti grabbed the mike for some 14,280 MHz SSB work. It was a bit quiet at first, but then Antti got a local contact to OH6JYH in Laukaa. Soon after, the chasers found the new frequency. Then Antti had a pileup as well and got to make his first HF contacts with his own call. The FB SSB contacts where a really pleasant surprise with our 5 W output.

After nine SSB QSOs, we switched to the Yaesu VX-8 handheld equipped with a Slim Jim antenna for local contacts on 145,500 MHz FM. In addition to Sotawatch Alerts, we had also notified about our small expedition on the mailing list of our local club, Radio Amateurs of Central Finland, OH6AD. So, there were also some local stations waiting for their first SOTA chaser contacts. By turning the Slim Jim around a bit, we managed to get QSOs as far as Petäjävesi and Viitasaari as well as very close contacts near Vaajakoski. Hopefully some of our club fellows got the inspiration to more SOTA chasing in the future!

We then made a short second round of the frequencies starting with SSB. Antti made one more QSO, apparently the band was starting to “cool off” for the night already as there weren’t any more replies to his CQ. On CW, I still got a little pileup and seven contacts. After two more 145 MHz FM QSOs we decided to call it a day and started taking down the antenna and packing our things. We made a quick visit to the top of the hill where some people were having a picnic around a bonfire. After the climb down we turned our car and bike towards our home-QTHs.

Warm thanks to everyone who participated our first activation by chasing! This was the first time that either of us has been in the middle of a pileup, so I hope we weren’t terribly unfair picking the calls. I must admit we were a bit excited at times, but overall it seemed to go quite smoothly. As this was the first time, there is of course room for improvement. The QRV time estimate was too optimistic, anything can happen, even on such a short trip to a local summit. The order of working different modes and bands could be somehow organized better. We chose not to operate at the same time so that we could help each other logging the QSOs and making out the calls. Altogether we logged 18 contacts on 14 MHz CW, 10 on 14 MHz SSB and 7 on 145 MHz FM.

We also took some pictures, I’ll upload some of mine to Flickr when I have logged the QSOs in the database. Some chasers requested QSL cards. My own card is not yet ready, but with the new pics, I’ll try to finish it during the summer and everyone will get their cards through the bureau.

Once again, thanks to all chasers, I’m already looking forward to the next SOTA operation!

Here are some pictures that I took. Antti, OH6FME took some as well and they’re probably better as it seems that I forgot the ISO setting way too high… 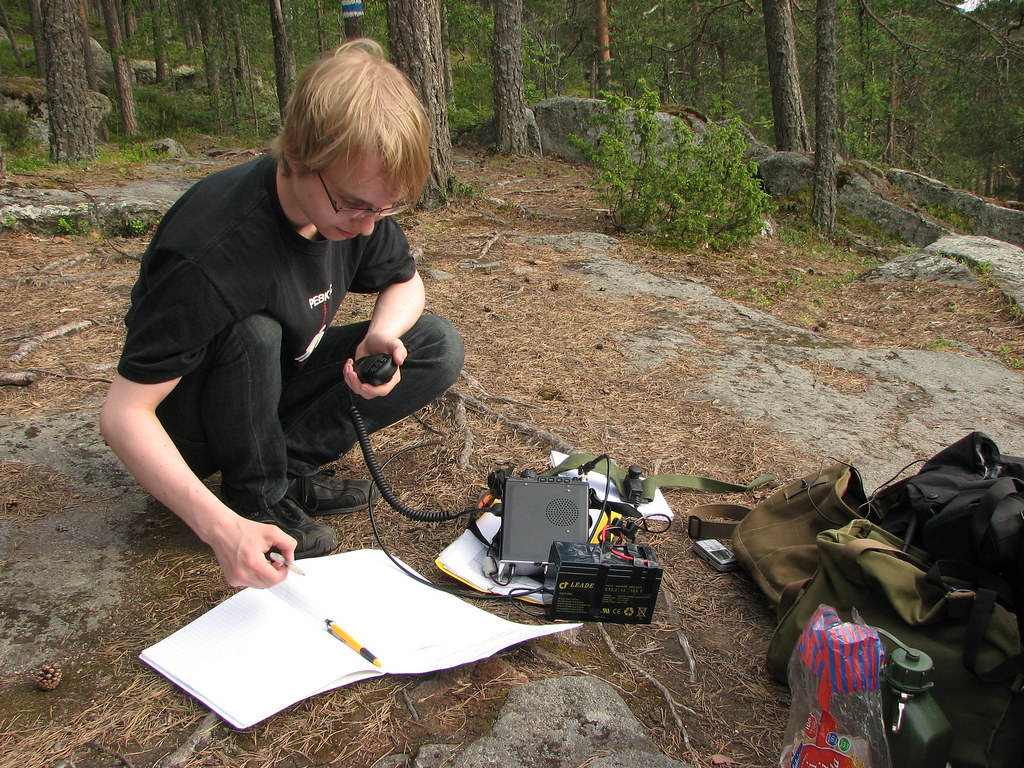