These two have been “to do” for nearly 10 years. Early I saw they were not too far away from my QTH but a lot of effort for few points. Nutberry is a long walk from anywhere over rubbish ground and the only reason you’d be near Middlefield Law is because you were bagging something nearby. And there is Cairn Table SS-120. I did that 1 year into my SOTA career. I have still to find a more boggy and nasty summit. Higher up it’s not bad but the lower slops are a celebration of brown bog, gloop, mud etc. It’s put me off the area in general. And that is another issue. A lot of the towns/villages here date from when there was unlimited jobs in mines and steelworks. Those jobs have gone and some of the towns are showing the pain. Maybe on a nice day…

It was meant to be nice but was very misty when I got up. It got mistier on the way West but about 3miles from Muirkirk the mist vanished. Result! It was quite sunny and Muirkirk looked quite nice as I’ve only ever seen it in the rain before! Up the B743 and in minutes I was in really pretty country with lots of hills and not long after at the parking place. There are 2 popular routes in to Nutberry via Priesthill Farm or the Dippal Burn track. Priesthill Farm route is shorter but does involve more climbing over what is, to put it bluntly, bleedin’ horrible terrain. Dippal Burn track lets you walk in much further on an excellent track (smooth enough for a low slung Ferrari). It also has more natural navigation aides. I don’t like relying on a GPS. The Dippal Burn route gives you a fine track to follow and then the Leaze Burn most of the way. Finally just going up till you hit the forest track and follow you nose to the highest ground. Returning is a case of following a compass bearing and if you go wrong, follow the tree line to the forest track then walking West or South till you find the burn and following back to a track. We should know how to follow a compass bearing, but this still seems easy in poor visibilty. The Dippal Burn route also means you park in the perfect place for a quick dash up Middlefield Law.

It was still misty in the distance but I was booted in minutes and off down the track. Easy walking even if I did have a around 10 Herdwick Sheep and their lambs with me. Dumbest sheep ever… instead of running off they walked in front of me for half of the tracked length. The flock disturbed a Canada Goose that was nearby and it started honking. 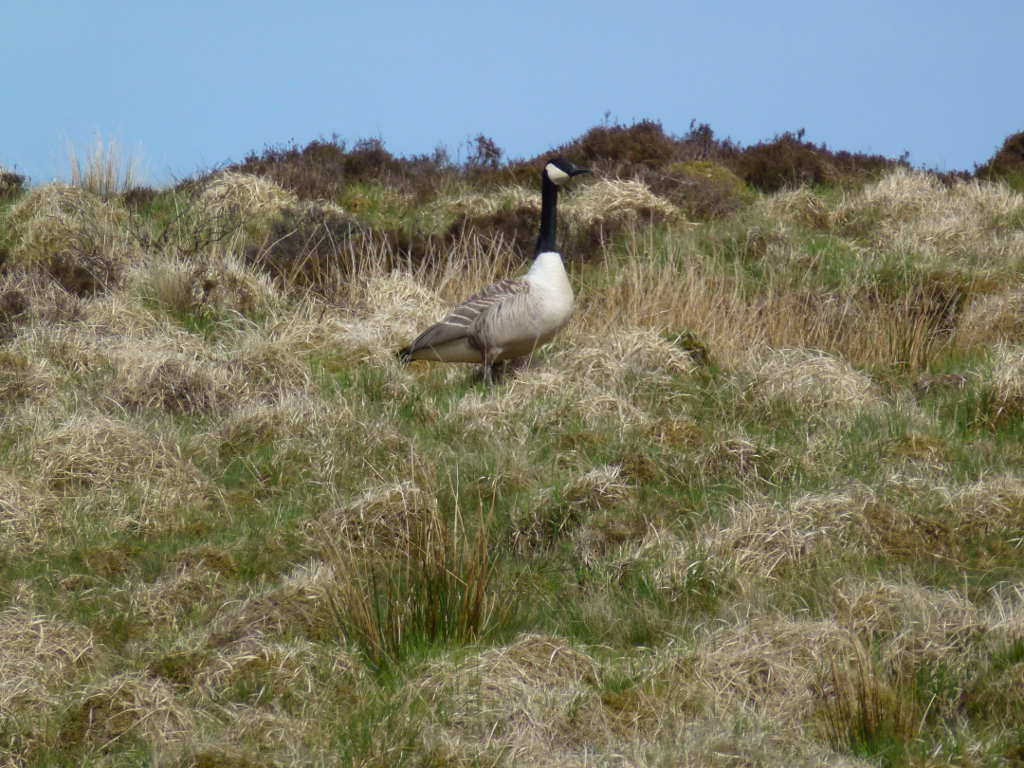 It wasn’t long till I got to the end of the mapped path but it runs on much further, nearly a km more. However, it did mean I would need to go “off-piste” and the ground is awful. You can see that in the goose photo but that is the easy stuff. It was a mixture of moss, heather, tussocks, bog and grass. The tussocks were far enough apart and small enough you could walk around them but it was not simple walking. Constant thinking about the next step. Still misty and also little wind and quite warm. If it wasn’t for the ground this would be top notch SOTAing. So follow the Leaze Burn till something happens was the plan.

View back along the Leaze Burn to the track. You can see how misty it was. With clouds of it rolling over slowly in the wind but not terribly impeding the view. This is looking back to where something happened: the Leaze Burn splits! It’s this point when heading straight up starts. Finding either of these burns on the descent in poor visibility means you can find you way back to the track. 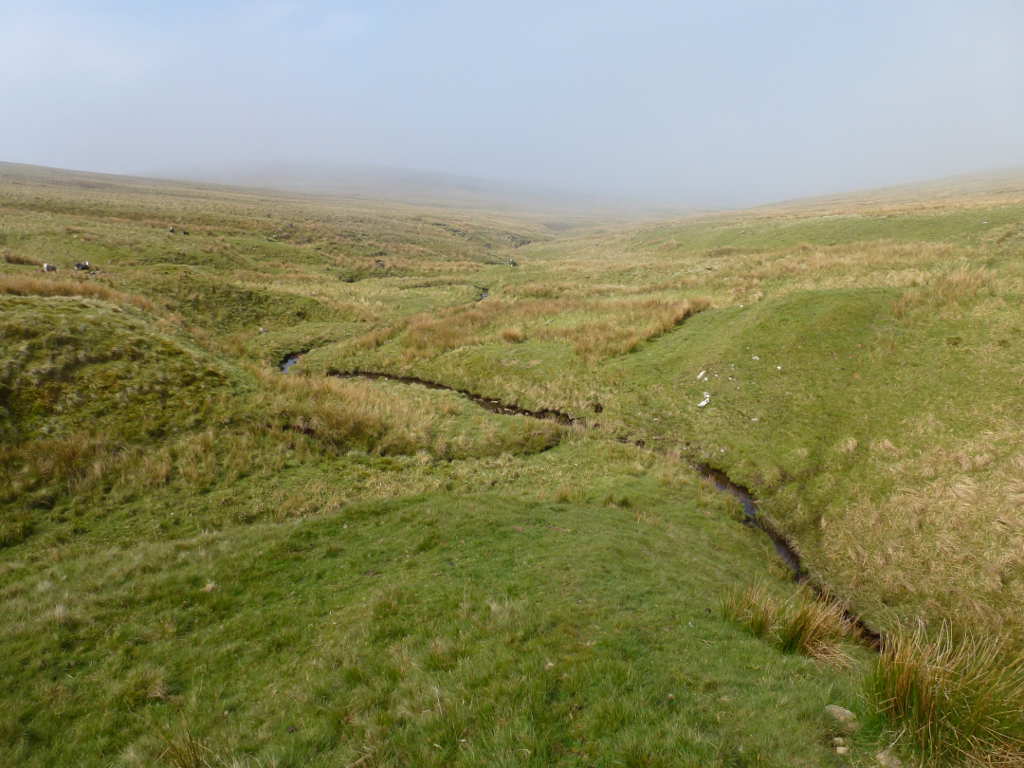 Looking where we are going. The gap in the trees is the target as this grants the only access to the summit from the forests. Very little mist that way. More diabolical ground however. 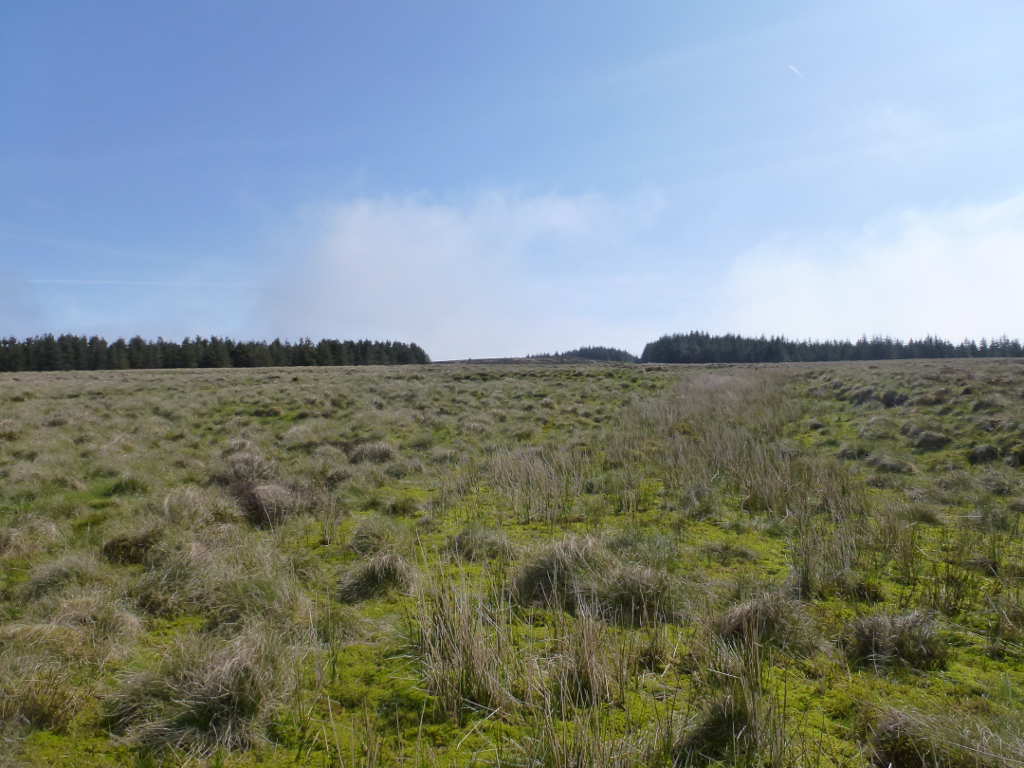 It’s not long till I hit a fence and saw a small deer running away. The ground across the fence is worse still, thigh deep heather. Of course, on the way down I found the oath which makes it 100x easier. Damn!. Looking at the gap in the trees, aim for the right hand side, the path is there. Once across the heather I got to the forest road and again on the right hand side is an old quarry where the spoil has been made into a ramp. Following this up I found the ATV track that runs to the top. Ho hum only another km to go. Finally I got to the top. There has been some felling in the forest and with clouds of thin mist rolling past it looked very erie.

Possibly the mossiest Trig Point in the UK, built June 1949 and in not bad condition. More mist rolling over the hills. The obvious peak in the far distance is Middlefield Law, the next target. 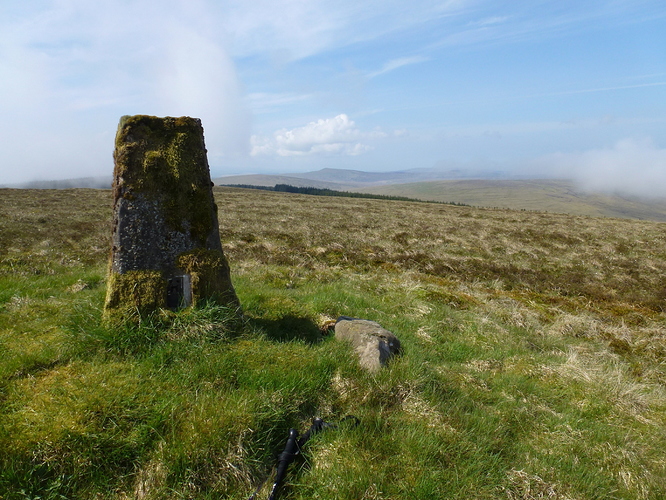 Contrast the view of the trig1hr50 later when the mist had finally cleared. 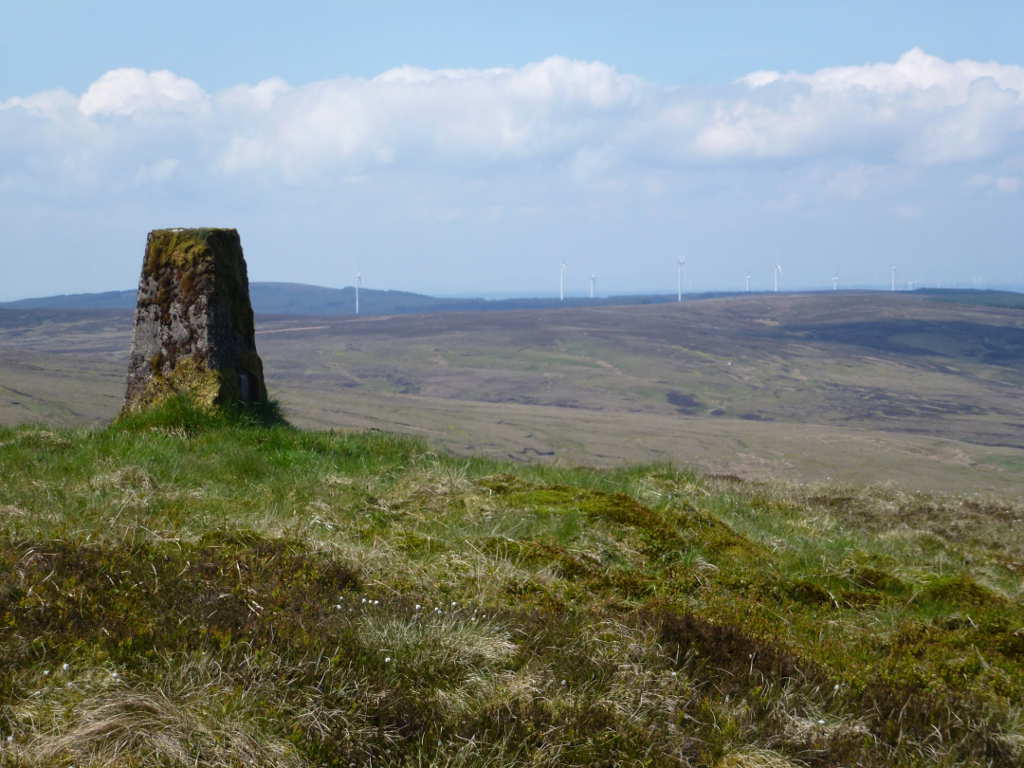 For once the sky was working and 60m let me bag 8 QSOs with no trouble before moving to 40m. I was bit worried there would be no cell coverage. But it was good. Only when the mist cleared did I realise I could see the outlying suburbs and towns around Glasgow 25+ km away. This meant I had 20mbps 4G coverage most of the time. Spotting on 40m brought lots of calls on SSB but strangely only 2 chasers on CW! But it was nice to work people easily. Well the only contact I didn’t get was Vicki M6BWA who was LOS to me on Culter Fell SS-049. Nothing on 2m despite asking Rod to ask her to call again via 40m. Tests today show that the rubber duck I stole from my Icom for the VX170 has a shorter centre pin on the SMA and doesn’t make contact when I added my 19in dangly wire that adds an S point to signals. Drat!

Looking somewhat less than happy. It was a good activation but I was thinking of the walk back and that I should have grabbed Middlefield Law first when I was fresher. Hmmmm… 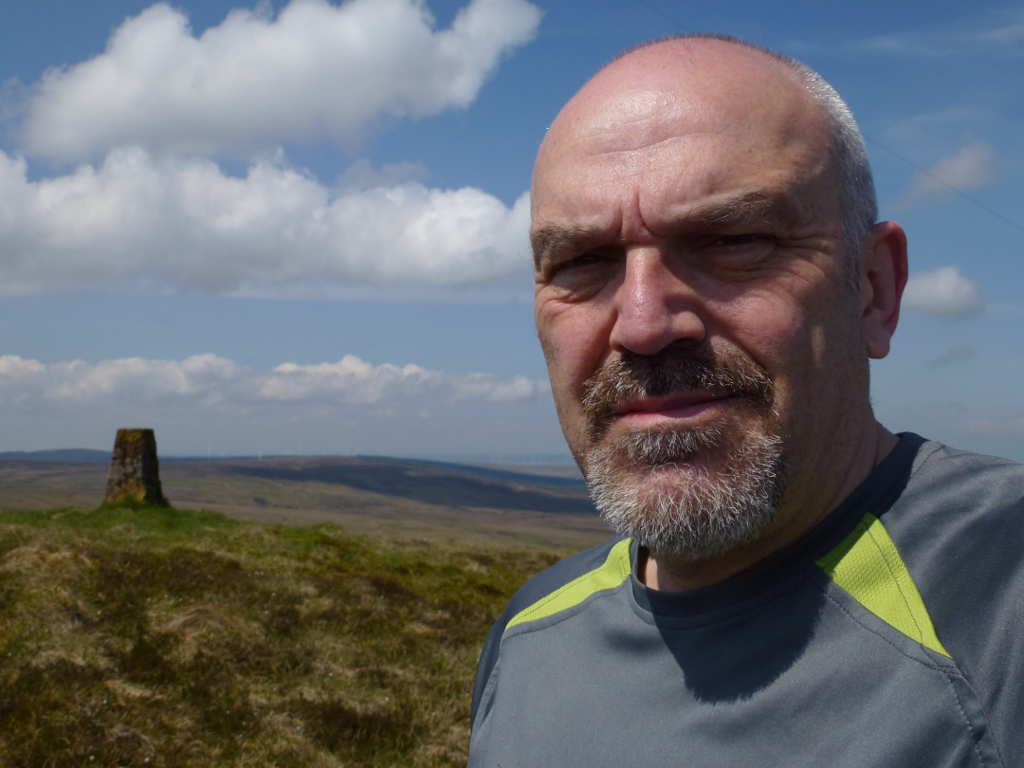 The walk out was the reverse. Trivial with the mist gone. I met a bloke who had driven to within a km of the top back at the road. He wasn’t letting on how he had a key to the gates or what he was up to. Probably going to bury the bodies he had hidden in the car!. The walk back was tiring in the sun. It took 1hr50 up and 1hr30back. Most of the time is the distance covered not labouring up a slop. The GPS says I walked a total of 13.6km and the ascent was 265m.

Back at the car I had a litre of water and some energy bars and 15minutes rest before climbing Middlefield Law. This is reasonably straightforward… go straight up! More rotten ground but it improves as I climbed up. More deer, a mother and 2 youngsters. I caught a photo the mother when she stopped to check on me but the young were too fast. 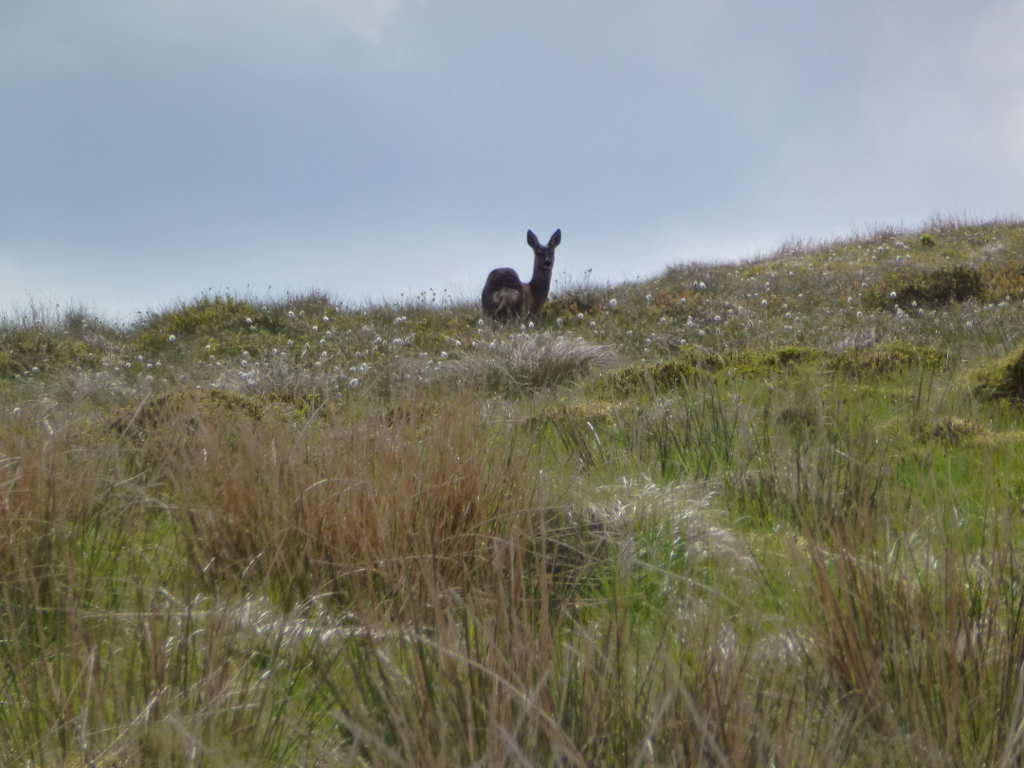 Looking back about 2/3rd up. Nutberry Hill is the furthest summit on the horizon in the centre and the small white dot to the left of the middle ground is my car. Not a lot out here! 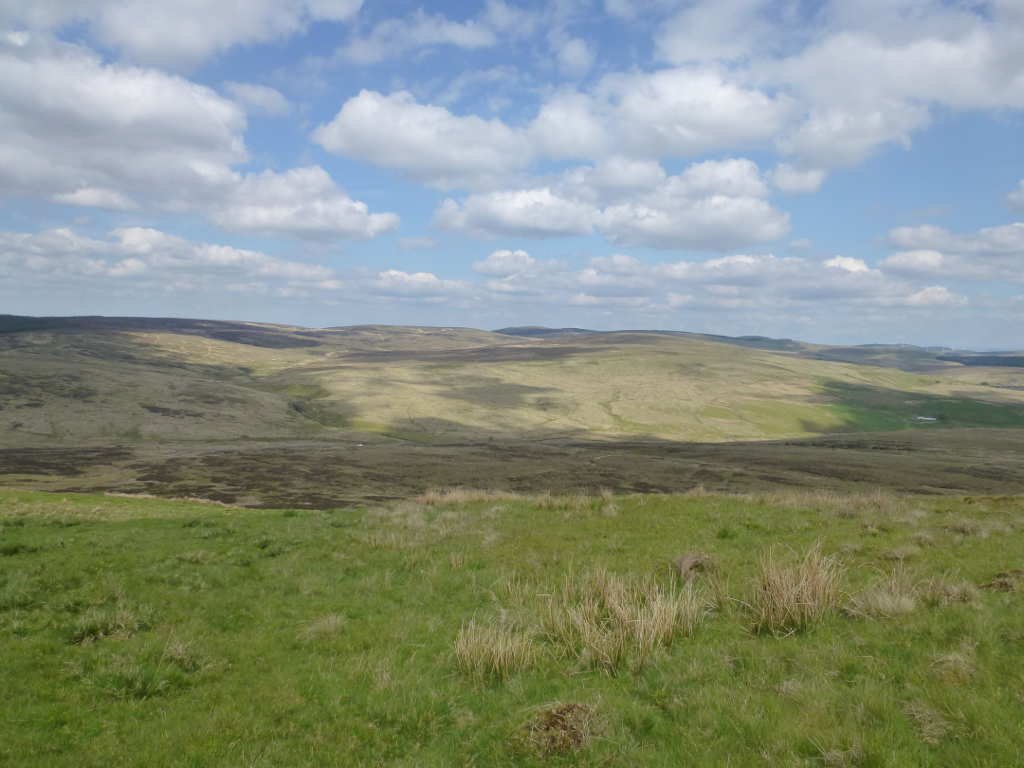 The summit was soon gained, about 35mins from the car, I was surprised at how easy I found this. My feet ached and my legs were tired. This was the furthest I had walked since my back injury last September. 40m worked very well but cell coverage was scrappy. Enough to send an SMS or two. 15QSO on 40m with again only 2 being CW. About 35mins on the summit was enough to setup, operate and pack up and I took a few more photos before leaving.

Tinto GM/SS-064, the eternal summit at 28km. There are few places where you cannot see this, no wonder so many people climb it. It was my first SOTA summit nearly 10 years ago. 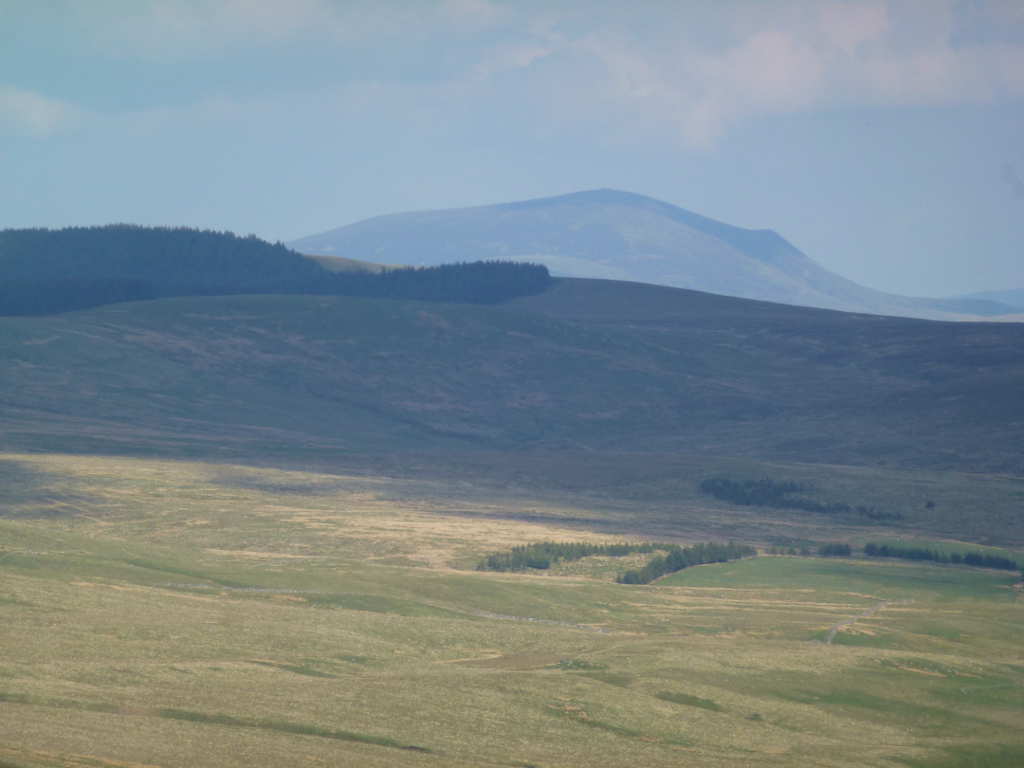 Finally, the horror that is Cairn Table GM/SS-120. It looks quite nice to be honest. You can see the huge scar of the path. It’s OK when you get to there. What you can’t see are all the people bog-snorkeling there way along the bottom. Best done on a very cold day when it’s all frozen. Or as I say, best done just once. I’ve done and I’m still having the therapy to cure the PTSD of the ascent 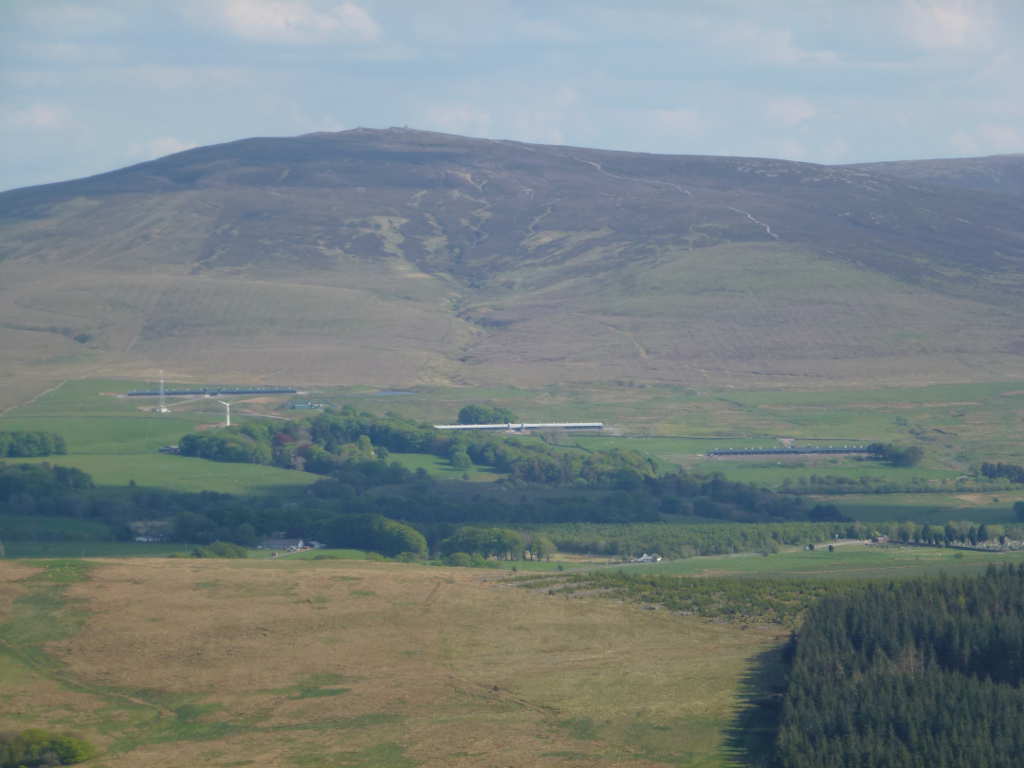 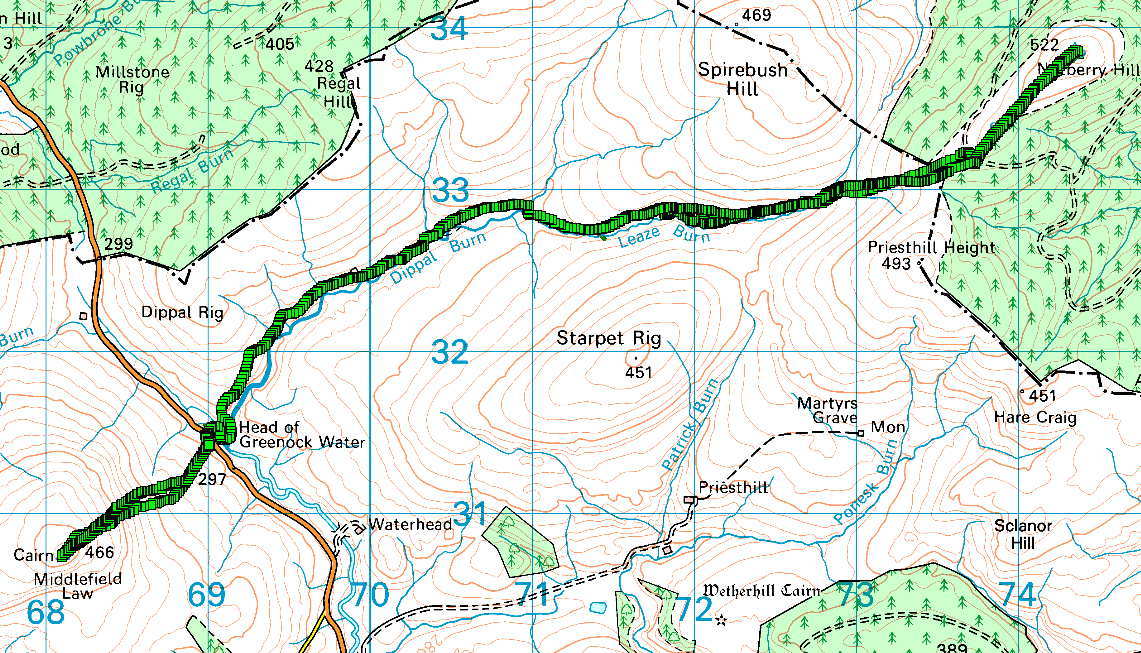 That’s 2 awkward summits off the list, next some more GM/SS summits that I’ve been studiously avoiding. The only way to stop them standing out on the map is to go and activate them! Colt Hill and Wether Hill next I feel.

Thanks for the nice report

Gerald and I always do the “easy” one first… seems to be more palatable that way!

We did Nutberry from Priesthill, we found a source that said you could drive right up to the farm to park (though we stopped a bit short) and visited the Martyr’s Grave on the way - a saddening experience. Don’t recall the ground being too bad, there’s a stile to cross the fence where three fences meet at Priesthill Height. Would have been nice to catch you for a complete of this rarely activated summit but my local S9 noise had other ideas