Null and void activation of EI/IN-084

The attempt was in good faith, but I now know that I was outside the Activation Zone, so not a valid activation.

What happened:
Earlier in the day I activated Arderin - no doubt about that one, I was on the summit!

I then decided that I just had time to travel back through Athlone, where we were staying, and up to Slieve Bawn EI/IN-084, which would be a new one for me.
My favourite bookshop in Athlone (Easons) stocks OSi maps, but they didn’t have sheet 40, which includes Slieve Bawn.
After a few navigation errors on the road up, I arrived in the car park 20 mins later than hoped. Still time to activate. Head up to the ridge, and find a nice picnic table near the summit cross and commercial radio mast. I can see the true summit further along the ridge, and my GPS tells me that I am only 5m lower (vertical accuracy on these consumer grade devices is not good, as discussed in other threads, but this would have been within the margin of error).
Set up and play radio on 40m and 20m, all good - or so I thought.
As I walked off, I had an uncomfortable feeling that the coll between me and the true summit might be unhelpfully deep, though with time running out it was too late to investigate in detail.

Back home now, I ordered a map which arrived today, and confirmed that the coll is at least 32m below the summit, so that’s it I’m afraid

The only good news is that I now know the way, and hope to be back to do it properly before too long!

Very disappointing. I heard about the Locus Mapping app on this Forum recently and I used it on my trip to France. It saved me on one summit when I was about to start but on checking discovered I was about 5m too low. I also used it on a wooded summit where the actual summit was private and not easily entered.

Unlike the ubiquitous Google Maps it has contour lines and you can use it offline by downloading the local map data before setting out. It works on a mobile phone although it is a bit of an eyesight test. There is also a learning curve as I don’t find it very intuitive but it does serve where paper maps are not available.

This is a screenshot of where you were, showing the two summits. Sorry if this is rubbing salt into your wounds, I don’t mean to, but I’ve found Locus Maps very useful 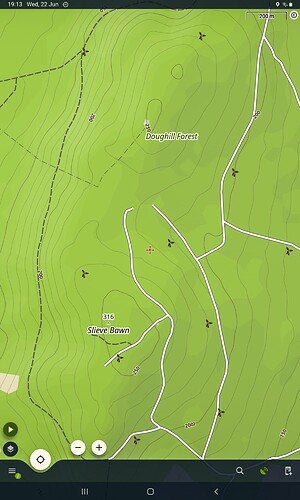 No problem Adrian, I hadn’t uploaded the log to SOTA yet.
Regards, Mark

I came across this a while ago,Activation Zone. I’m not sure how accurate it is, but it’s probably accurate enough for our purposes.
Here’s the output from EI/IN-084. 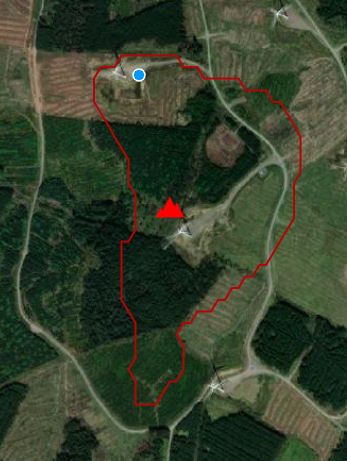 I recommand the online topologic map with - imho - accurate datas. Tap on the map and you get the information. 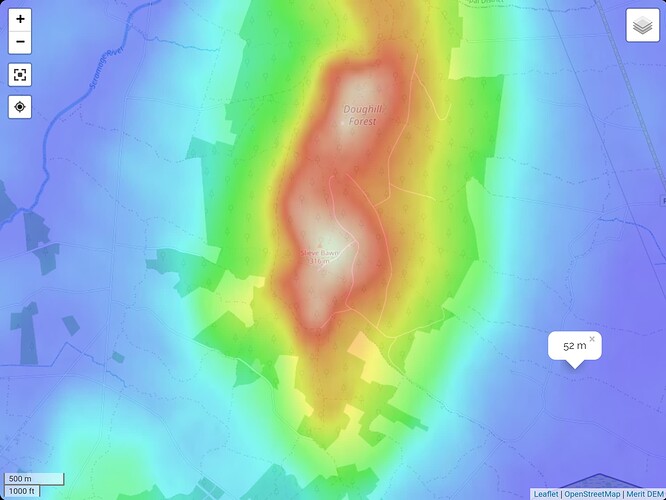 It is noticeable that the summit is given much higher in the maps with 316m than in the contor lines topological maps. 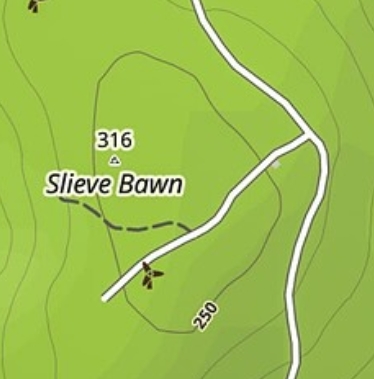 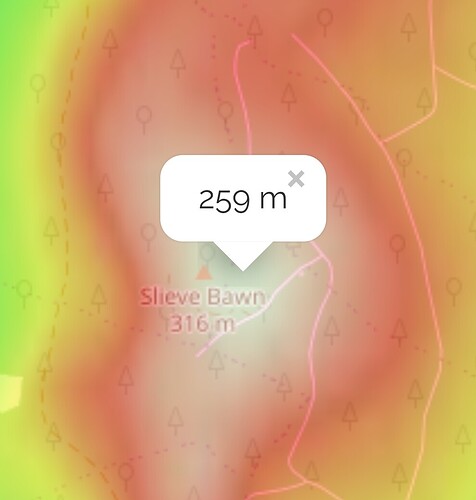 Remember that these SRTM-based products probably are not accurate enough to be confident of the difference between a 32-m drop and a <25-m drop. It’s unfortunate that the OSi topo maps aren’t available to study online. Actually in this case the three space-based DEMs I’ve checked all agree that the col is too low. For example COP-30 puts it at about 30m, but as these are surface (not terrain) models the trees are likely to be affecting it, besides the poorer inherent accuracy compared with the national mapping.

Sorry to read about your void activation. I’m not familiar with the summit in question but below is an OSi snip from my GPS which indicates that the col is in the 220-230m range. 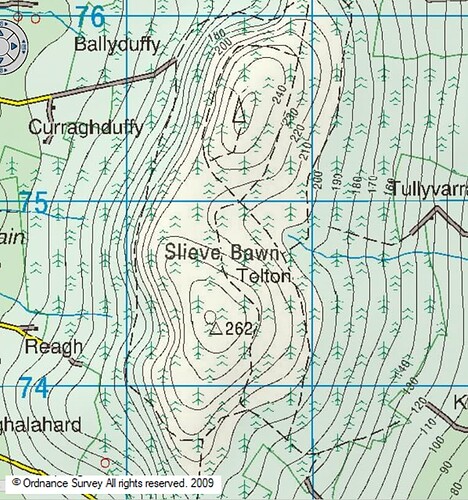 Thanks for the tip. Nice site to check the AZ.

Thanks for the comments, all useful, though haste on my part was the main problem in this case!

I would say the steeper the mountains - like in the alps - the bigger the error.
Either there is no activation zone found or it is just wrong.

Only way is to go to the true summit and judge from there.
That’s my 2 cents on that website. Nice try but data not good enough yet.