NO HF SOTA operation unless you learn CW! (Part 1)

Thanks, that’s good to know in case it comes up in conversation with someone who does enjoy that sort of thing.

Just a bit of banter Brian. Just laugh it off. Or - if you can’t beat 'em…

PS Your favourite epithet in this thread reminds me of Ninesense - but its to late at night for that!

For those who have tried and given up or fallen by the wayside,

I’ve read countless trials and tribulations of those who struggle, but fail to learn morse.

I’m not sure I’d have the perseverance or patience to learn on my own.

(That goes for the touch typing too!)

…doing it with any help you can think of.

…doing it with any help you can think of. 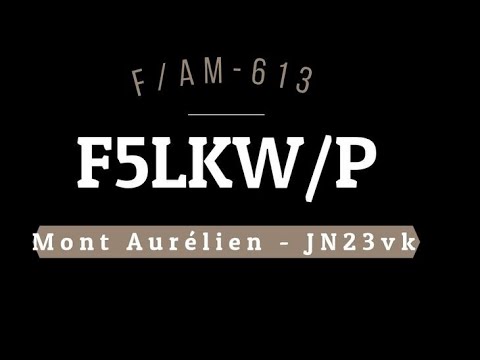 Hi SORRY not Eric, but Roger
It’s exciting to hear our qso again. I can’t believe it’s me.

EDIT And you also show an essential learning method that Lars also recommended to me: Record the qsos and then analyze them at your leisure

“No HF SOTA operation unless you learn CW”.

This was actually a reality for me. The morse test requirement had been withdrawn, but I found operating on HF SSB with a 5w FT-817 hard work, and, more to the point, the minimal operating skills of the very inexperienced operator I was in the early 2000s, I had to do something to get HF SOTA working for me.

I could have gone down the 857/QRO route I suppose, but looking at the domination of the CW spots on SOTAwatch at the time, I really fancied a piece of that action.

These days I can do HF SOTA operation on phone no problem, still with the 817 and its QRP. But I have got a couple of decades of operating experience in since those early days! Back in 2003, the thread title was absolutely true - for me.

The operating experience is often overlooked.

Hi,
Some thoughts about CW in general and CW for SOTA.
I did my CW test back in the 1990s in 2 steps: first 6 WPM one year later 12 WPM.
12 WPM is OK but is it enough to deal with working the bands and SOTA fluently?
At present I sent CW with 24 WPM (which is max because of my QRP operation) and am able to deal in SOTA chasing with an activator sending up to 30 WPM.
This 30 WPM hearing is max for contest and SOTA. Standard QSO comfortable may be up to 28 WPM
Free tekst is another story, depends on language. German, English or Dutch makes a difference.
My idea for SOTA Chasers, be able to hear the standard SOTA QSO up to 30WPM.
For an activator to give everyone a chance lets say 24 - 26 WPM is very OK.
For a chaser sending to make sure things go smooth I would say being able to sent at 18 WPM is OK
24 much better.
But be aware all I say above is based on y view, my experience

Well yes, lack of experience has to be taken into account, but you gain experience by perservering, not by by-passing the problem. Twenty years ago I came back to amateur radio after a ten year lay-off, I was short of space so I bought an FT817 as a starter do-everything compact rig. Not long later the CW requirement was dropped and I got on HF. Within a year I had worked 100 entities on five continents with 5 watts of SSB and a G5RV, and 30 entities on 6m with a GW0GHF wire antenna. It would seem that QRP was no barrier to me, and while I’m sure that previous experience was a great psychological help, though it wasn’t on HF, the fact is the RF got out and was answered. I felt no pressure to move to CW to get contacts.

felt no pressure to move to CW

You wouldn’t have done. You were successfully making HF contacts with QRP on your 817. I wasn’t. The difference between us at that point in time, was undoubtedly, operating experience - you had plenty, I had little.

I could have gone down the 857/QRO route I suppose, but looking at the domination of the CW spots on SOTAwatch at the time, I really fancied a piece of that action.

As someone who’s not currently interested in doing the work to regain any CW proficiency, this is THE reason that would change my mind. I wouldn’t be surprised if I get there over time.

Reading this thread brought back some memories for me and the feeling of how restricted the old Class B could become for those wanting to branch out in the wider sphere of amateur radio. The first memory was from the early 1970s when I held a Class B licence, I had an inspection by the officer from the Post Office, the then licensing authority. After he looked through my log I was duly reprimanded for working 2m AM crossband to Peter G3YCT who was on 10m CW. Apparently I was not licensed to receive 10m or CW as part of my operations. Bizarre as short wave listening on 10m was open to all.

Peter was very active on HF SSB and CW at the time. One of his interests was the CHC - Certificate Hunters Club. I attended a number of their meetings with him and always felt that I was a second class citizen, as though being licensed for 144MHz and higher frequencies was inferior as the possibilities for working for certificates were limited. Maybe this holds true in a similar manner for some of today’s novice licensees.

The actual reason that I took the morse test in 1982 was that I was fed up of trying to find a Class A licensee in the middle of the night when I was called by a station on VHF Field Day using morse… and what band would I be operating on? 23cm where I was licensed to operate, but not on CW!

As to the original question, I started SOTA on 2m SSB and achieved my MG using 2m and 70cm. I still try to use 2m SSB whenever I can. It used to be a lot easier a decade or so ago when there was a greater interest in 2m SSB, but now can be a hard task. However, on occasion I am able to work quite a few stations and a 2m SSB activation where the QSO count reaches double figures feels like I’ve won something.

Had licence requirements remained unchanged since the 1970s such that morse was a requirement for HF operation and had I not taken my morse test, then no doubt I would still be activating relying on 2m to make the necessary contacts. Obviously I would be missing out on the delight of working other continents and maybe failing to qualify a few summits, but that’s life.

Oh, and a comment for those former Class B licensees that use CW during their activations: to me it feels rather strange to use CW when I am activating with my G8 call rather than my G4 call. Now is that because of the association with what was allowed with a Class B licence or is it just that I am not using my main G4 call? Perhaps a little of both.

Apparently I was not licensed to receive 10m or CW as part of my operations. Bizarre as short wave listening on 10m was open to all.

Doubly bizarre as CW was added to the B licence in 1965!

There’s a vast difference between…

it feels rather strange…

It’s all I’ve ever known having always been M1EYP - a Class B call of course. M1 is a prefix that seems to attract interest on HF CW anyway!

I’ve just checked SOTAWatch and noticed this split between CW and other modes. 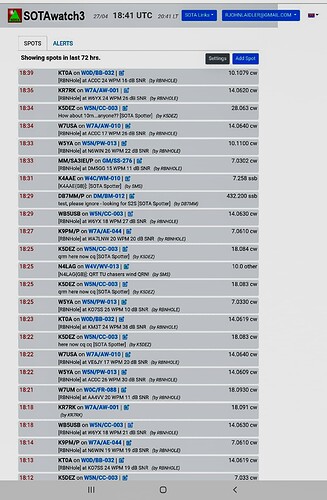 I’m not suggesting for a moment this is typical but it is still interesting. CW is very much still in use in SOTA.

I did a bit of chasing today with my QRP rig from a campsite in France this afternoon and in a short time logged 6 QSOs. One 40m SSB but the rest were all on CW.

Thank you for the qso, and sorry for mangling your Callsign!
73
Adrian

This topic was automatically closed after reaching the maximum limit of 100 replies. Continue discussion at NO HF SOTA operation unless you learn CW! (Part 2).