The latest v 1.90 RC2 version of WSJT-x has just been released and is available for diownload from Sourceforge here - https://sourceforge.net/projects/wsjt/files/wsjtx-1.9.0-rc2/wsjtx-1.9.0-rc2-win32.exe/download

I’ll let you know what’s new / different when I find out.

So this is the 2nd. release candidate (not yet 100% stable) version that has the extensions for use on DXPeditions and includes a varriety of performance and reliability improvements.

System Requirements
• SSB transceiver and antenna
• Computer running Windows (XP or later), Linux, or OS X
• 1.5 GHz or faster CPU and 200 MB of available memory; faster machines are better
• Monitor with at least 1024 x 780 resolution
• Computer-to-radio interface using a serial port or equivalent USB device for T/R switching, or CAT
control, or VOX, as required for your radio-to-computer connections
• Audio input and output devices supported by the operating system and configured for sample rate 48000
Hz, 16 bits
• Audio or equivalent USB connections between transceiver and computer
• A means for synchronizing the computer clock to UTC within ±1 second

Checking the WSJT Yahoogroup, there is discussion on how the features in WSJT-x could be used for SOTA and it seems someone has worked it out.

This is from the list - so in reverse sequence - newest at the top.

I’ve got macro expansions working. Starting list is this…suggestions welcomed. I’ll note that using “FD” was discussed before and discounted as few would know what it means and I wonder how many would be trying to figure out a state that beings with “F”

The restriction on these macros is it needs to be after your callsign otherwise the other side can’t quite handle the format. On older versions they will just see the short macro instead of the expansion.

As I understand it, you can already send 2 letter directional CQ’s, so this is already possible:

CQ FD W9MDB EM49, or CQ SS W9MDB EM49
We would only need the macro codes for things longer than 2 characters (perhaps such as SOTA, CONTEST, 1010, QRP, EME*, DXPED MODE, VHF TEST MODE, etc.) Being able to have 36 potential macros sounds like it could really cover a lot of potential phrases! It almost sounds too good to be true!

I am not that familiar with the way WSJT-X is structured, but if the macro file could be accessed as a text file stored in the default WSJT-X folder, then it would be easy for users to download updated macro files as they became available.

You also might be able to use such a macro to identify something like the length of the sequence being used, provided there was a compatibility in the decoding between 15 second and other longer (but potentially more sensitive sequences). However, there may be easier ways to determine this automatically.

I wonder if we could implement some 2-char macros for that kind of thing?

If first char of token is “/” then it’s a macro that gets expanded.

Sounds pretty simple…old versions would see the macro…current ones the expansion. Could have 36 macros.

So you could do
CQ W9MDB /F

I understand the required protocol, but it sure would be nice to be able to use some
of the extra characters in the message to add something like “SOTA” (or possibly some
other standard acronyms like “TEST” or “CQWW”) onto the end of the CQ message… VY
73, Lance

The version for Windows is downloadable from here:

What I have found so far is a new selection on the main screen “CQ Only” so I presume that then only displays CQ calls on receive. 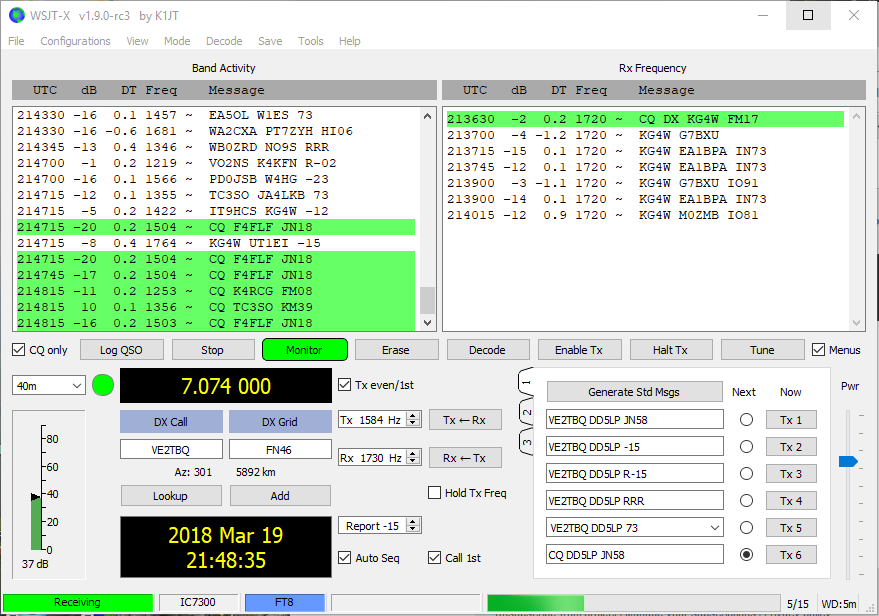 Changes from WSJT-X Version 1.9.0-rc2 include the following:

Good news, Michael!
That would be great to see one day time adjustment out of other stations’ signals. Looks easy to implement, but fixed stations don’t need it. Not as accurate as gps sync, but vital for remote portables.

Another issue is the fox restriction as “only for dx-peditions”. Activators are not equal to dxpeditioners, but the principle may save battery life very much.

Free frequency choice for foxes is a big step forward for dx-peditions, but portable station may miss many correspondents in case of using alternative freq.

Finally non-Windows tablet support would push the mode to the mountains.
Maybe goat-sloath mode will be developed soon…

Hi Sergey,
The concept that the “DX Pedition mode” was brought in for is a station running a pile-up. This is the same as we often have as SOTA activators, so in principal we should be able to work the software in the same way.

WSJT-x is available not only for the Windows platform but also for a few different distributions of Linux (even Rasbian for the Raspberry Pi), MAC OS X and the source code is freely available for anyone to compile to their own platform of choice.

While in theory, it should be possible to find a smart phone with enough power to run the code, the screen size can be a problem. Perhaps the newest “Phab-lets” with their 6.5 and 7" screens might suffice, but in my opinion a 10" tablet is really the minium size I would run the program on.

Hi Ed
Im sure I have read that the DXpedition foxnhound mode is only to be used for big rare dxpeditions and not any common portable mode. It uses frequencies outside the FT8 allocation.

Do the special callsign features in dxpedition mode carry over to normal operation?

I believe F&H might be available to the general public with a cap of 2 simultaneous QSOs (or some very low number) as it is as you point out currently intended for DxPeditions.

Choice of frequency while somewhat “fixed” by convention doesn’t necessarily preclude us operating somewhere close but different. If FT8 ever took off for SOTA then we might benefit from operating near the current FT8 frequencies to avoid being lost in the crowd.

A recent test was conducted of F&H which attracted 100s of hounds.

Hi Ron,
The DXpedition mode needs to be enabled by the DXpedition station and the chaser stations in WSJT-x and they need to be on the same version. If this is not done, the software works with the longer sequence as it did two versions ago.

As for “whether” we should use the DXPedition mode for SOTA and whether the developers would object is one question - the capabilities of the DXPedition mode “may” be extended later specifically for SOTA but as it currently is - it would IMHO technically work - just how the SOTA reference is sent needs to be agreed.

While the software is still in Release candidate (RC) mode, out for testing, now could be a good time to approach the developers about use of DXP mode for SOTA.

Paul, Agreed we shouldn’t use the multi-signal mode.

P.S. there is a new version of the separate PDF describing how the DXPedition mode works:

IMHO FT8 operation on all bands has turned into a rat-race, and this new DXpedition mode is only going to make things worse. Already, people are running more and more power, split frequency operation has become the norm (using two 50 Hz band-slots for each QSO), and it is already a case of “survival of the fittest” - trampling rough-shod over lower-powered stations and calling on top of existing QSOs. I will not be using FT8 for SOTA.

Hi Walt,
On the split frequency point, I believe that is the preferred mode as otherwise caller number 2 & 3 etc. are transmitting on top of the station responsing to caller 1.

I have to agree, the norm now appears to be to use high power, which not only flattens low power stations if it happens to be calling back on the same frequency but the wide signal also desenses EVERYONEs receivers, even if they are not involved in or listening to that QSO !

Yep, I’ve gone off it already! It’s a victim of its own success. I too won’t be using it for SOTA or indeed at home. I will stick to PSK31, PSK63 and JT-65, assuming there will be someone left to work on these modes. Maybe it’s time to see whether I can raise anyone - hoping they have not all gone over the FT8 like Lemmings over a cliff.

Hi Gerald,
It is what it is - some people like it but I can’t help thinking that now that the “only show stations calling CQ” function has been added we’re only a few lines of code away from fully automated mode. Switch it on and stand back and wait for your log to fill up!

On the split frequency point, I believe that is the preferred mode as otherwise caller number 2 & 3 etc. are transmitting on top of the station responsing to caller 1.

So instead of that, callers 2 & 3 etc respond on random frequencies, flattening other QSOs that are already in progress.
I have lost count of the number of times that I have exchanged just a single over with a station, only to be wiped out by another QRO station replying, split frequency, to someone’s CQ call elsewhere in the band. It is thoroughly antisocial.

Just to be clear, this “band” that we refer to is actualy just one frequency on the amateur band and at different points within the audio bandwidth of the rig - which is usually 2.4 or 2.8KHz wide as the SSB mode is used.
As you say in split mode the AUDIO frequency chosen by a responding station (QRO or QRP) is random and therefore a percentage of the times the frequencies used by stations could (and do) clash.

If this same logic were to be implemented in normal operation, and people used different frequencies, not all sit on one frequency, many of the problems we are talking about would go away.

At present we might have 50 stations operating at the same time in the space normally taken by 1 SSB station (2.4KHz) this has advantages in good use of the spectrum but disadvantages as that small block gets conjested.

Let’s hope the deveopers see this the same way and implement the needed changes in a later version of WSJT-x and the FT-8 protocol so that “normal” CQs also filter into the two parts of the audio spectrum.

Hi Ed
That would be just like WSPR but at higher power.
73
Ron
VK3AFW

I shall be sticking with Ver 1.8.0 which suits me just fine.

I neither need nor want the new, antisocial features which have been added in Ver 1.9.0

Hi Walt, I’m genuinely interested which do you think at the antisocial ones?
Compton

Hi Walt, I’m genuinely interested which do you think at the antisocial ones?

The only feature which really was in need of addressing was the program’s inability to handle non-standard callsigns properly (e.g. GB60OT, OT70WRA, etc). There has been no progress in this respect.