Kettle Reservoir and Altoona Mtn (18points)
Mobile phone coverage when using Verizon although it was spotty on the east side of the ridge leading to Altoona Mtn summit. 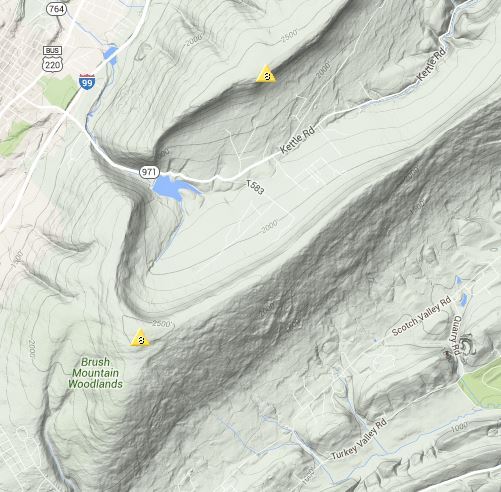 Having previously taken a look at Altoona mtn (Southern summit in attached map) from the east and having to turn-back after a half mile or so at a line of “posted” / no- trespassing signs I was hopeful that the obviously harder walk-in from the North would be an open 'back-door" for this activation. It was a toss-up to decide which of the two summits for the day would be attempted first, I say attempted as neither had been activated previously and so were still very much unknowns.
Aside… PA summits I have found typically have access, even those on private land, if you can identify the land owner and have a chat… showing them / using a SOTA handout what you’re upto you’ll get the OK. However, if you’re hitting no- trespassing signs belonging to businesses, that can be a real access problem.

It turned out that Chris KC3GIO was planning to activate Sugarloaf (W3 / PT 004) on Saturday, morning, so we decided to align our timing for a planned PA S2S…
Leaving home at 0630 I had plenty of time (in my mind) for the 1hr 10min drive, Gas stop and breakfast sandwich on route. As I neared Altoona, I contacted Chris and checked the time plan. Looked it it would need to be the “easy one” first.

W3 / SV-009 Kettle Reservoir Mtn:
I arrived on Kettle Road at around 7:30am… finding somewhere to park was the first order of business. The obvious “parking area” seen on the Satellite images was actually gated. But I was able to park on the road shoulder by the eastern most of the two sharp bends in the road shown on the map just north of the reservoir. With the summit programmed as a Waypoint in my GPS I headed up an obvious gully due North (0800hrs) and met a track running approximately East / West. Prior inspection the map had shown me that the most likely route to the summit ridge line would be an approach from the West… so I headed West. The track was perfect… and led me to exactly where I had wanted to go… (that doesn’t happen often). 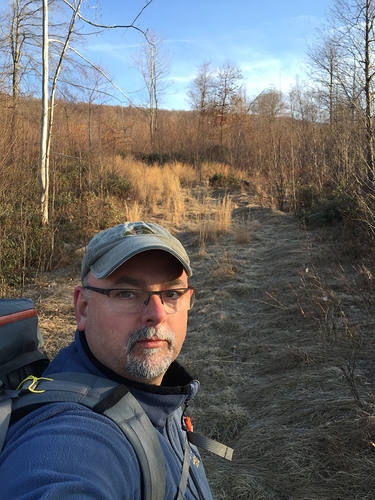 Within about 15mins I was able to see the ridge line probably 300ft above me. I only had to cross a rather steep boulder field. Watching for snakes as I made my way up I was upon the summit ridge in about 20mins. I couldn’t believe it when a wide rocky track presented itself… that wasn’t on the map! With just over a mile to reach the Summit and time moving on it was time to make the most it.As I entered the activation zone I was relieved to have not seen any “posted” / No trespassing signs… but that didn’t last. I wasn’t able to reach the true summit and was halted a few hundred feet short. 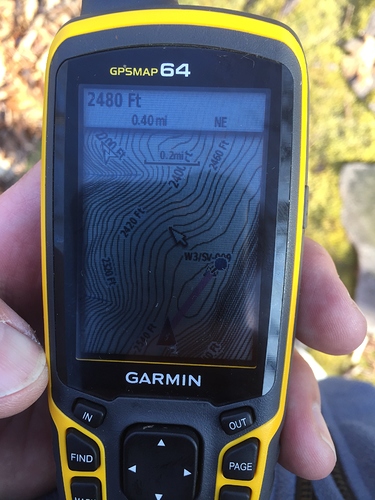 I pushed off the track to the East side of the ridge to take in the view and set-up the radio kit. Link dipole at head-height… I was ready to go and calling CQ around 09:20EST. As the CQ WPX contest was running I started in the “Extra” band area, spotted to the SOTA site and quickly logged 8QSO’s. 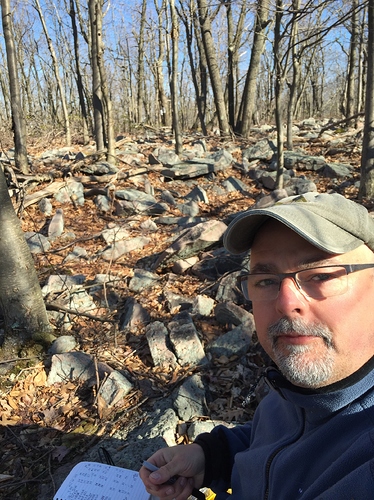 I then QSY’d to the General band area and 3 more in the log… then a couple of CQ WPX calls stopped by (fortunately I remembered my serial number from the night before), a few more of the regular chasers and then a S2S… with KC3GIQ, Chris. Job done at around 10:20hrs, I headed back to the car… arriving at around 11:20hrs. 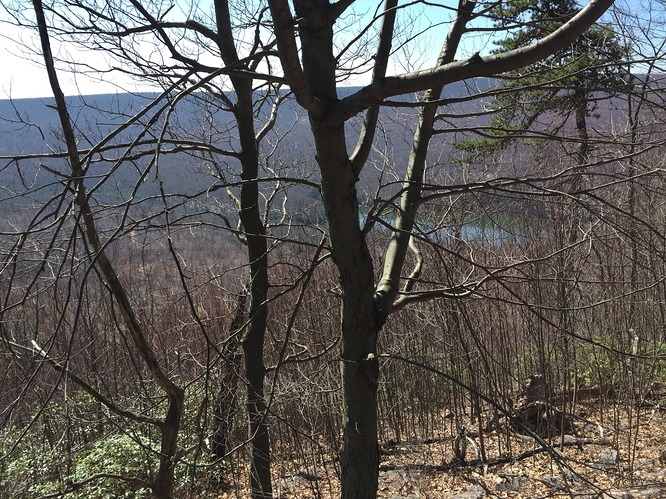 W3 / SV-009 Altoona Mtn (the photo above is of Altoona mtn, taken from Kettle reservoir mtn)
I moved the car down Kettle Road (west) below the start of the climb to Altoona Mtn. The previous parking place was a touch further east and while on the map it looked tempting, the reservoir area had no- trespassing signs so I had to move further west anyway. I found a good parking spot and checked my gear. Through previous map reviews I knew I was in for some sport on this one… from the car the slope is quite steep, boulder strewn and there are no paths in sight. I pushed on and eventually saw a glimpse of sky on the ridge line to the north/west above to my right… left would be to the summit… but was even steeper! I pushed up right and the grade reduced. The next portion of the accent is a bushwhack!.. after the next 10mins I stopped to put on my thick brier ready trousers… the push to the activation zone was tough, thick vegetation interspersed with blow-downs and boulder fields… hard work on the feet. Navigation was easy… just keep to the eastern edge of the ridge and head for the antennas. Pano photo below shows 180degs, kettle res mtn on the left to Altoona mtn on the right…

My GPS Map64 maps showed an old track road that wasn’t on the ground, but 10mins later I hit an actual road that you can see on the satellite views (going to the three radio buildings/towers) and looking left I was presented with no- trespassing / Posted signs and could see the radio station buildings and antennas a maybe 100m away. 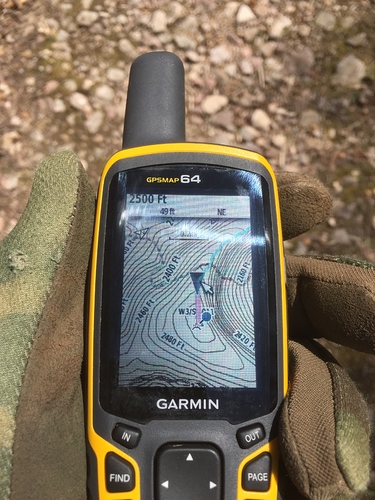 No problem, I was in the activation zone at an elevation of 2510ft.
Radio set-up and ready to go at about 13:30hrs EST… it was a 2hr walk to cover about 1.7miles.
I spotted to the SOTA system with an SMS and started to call CQ on 7.180Mhz. Using the voice caller on the KX3… what a luxury… I immediately received calls and quickly logged 7QSO’s. Then I received S2S calls from TN (WX4ET) and Canada (VA2VL). A couple of backyard QRP stations and then another S2S (NA9Q). Finally I switched to 20m let the voice caller do some work and logged another few stations. I was off the air by 14:05hrs EST.
Packing up… it was tick check time… all that bush-wacking, I knew I’d have some hitch-hikers on board… I only found a couple… but they were the worst type… deer-ticks… another double-check… no more so I picked the waypoint for the car in the GPS and headed out.
By the time I reached the last part of the route back, it was getting tough… I was “a bit” tired, I decided to take the direct route to the car… down the steep, boulder strewn slopes. For those of your knowledgeable of Snowden… this is not the fun scree slopes… these are big wobbly, unstable steep boulder fields. It was a poor decision, but I was committed. Glad I had the walking poles, I got back to the car safely for tick-check #2… no hitch-hikers from that stretch…

Finally…
So while I won’t be heading back to Altoona mtn again unless paid to do so… :), Kettle Reservoir Mtn, was really good and I recommend it to others. It was a great day out, Spring weather, two first activations, five S2S QSO’s and 18points.

Well thanks for such a nice report. Lots of effort expended, but good payoff for you. Glad you QSYed where we could chat with you. 73 until next time
Merle and Herm
KB1RJD and C