My First Ever SOTA Activation Today!

Well after a longer delay than I had originally hoped for, I finally got around to my first ever SOTA activation today, & only on 2M & 70cm.

I decided on G/WB-004 after seeing alerts from others who might possibly be in range for a S2S attempt, I was not disappointed, in all I managed to log 5 S2S in total, the first contact in my activator log was Viki MW6BWA/P on GW/SW-011 the Sugar Loaf on 70cm & again later on 2M, she sounded quite busy but unfortunately I could not hear some of the contacts she was working.

The furthest S2S for me today was Peter GW1FOA/P on GW/NW-051 at 92KM on 2M, I didn’t think that was bad for my small handheld radio & a wire J-pole antenna.

Other than the S2S’s I struggled to get very many contacts with just 10 in total for the day, still as it was my first attempt I was quite happy not to have a great pile up to deal with.

The weather was reasonably kind, well, at least it stayed dry, if a little cold in the wind & some snow on the ground still, I was tucked into the rocks behind the trig for the activation which was a nice sheltered position & even the sun showed its face briefly which was quite unexpected but welcome non the less.

I had plans to do a second summit but time slipped away from me & so it was just the one for today, but it has wetted my appetite for further SOTA activations.

Thanks to everyone for the contacts today & I wish you all the very best. 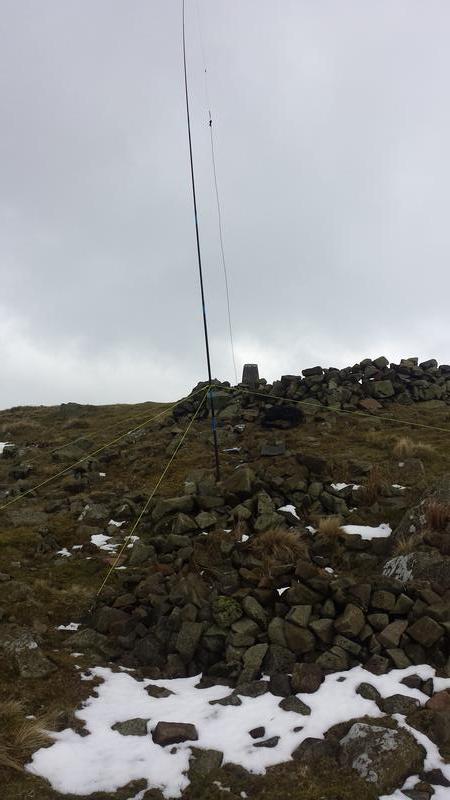 Hello Neil,
Well done on your first activation. No chance on my H/H in East Sussex but perhaps later you may venture onto 40m.
In any event good luck.
Cheers
Mike

Congratulations and well done on your first SOTA activation. Be careful though - the SOTA spider will already have started to weave its web around you and draw you in.

Catch up on the hills one day soon.

Glad your first activation went well, and thank you for the S2S.

Hi Adrian, yes, thank you also for the S2S today.

So thank you for the points & I hope to work you again soon.

And thanks to everyone here for the kind words, I look forward to contacting some of you in the future.

Hi Neil nice to work you and welcome to the SOTA fraternity but beware it is addictive!

Thanks Peter, & it was good to work you again today from home, I hope you had another successful day, & have an enjoyable weekend coming up.