Having obtained my Foundation Licence last week I have got straight into my “career” as a SOTA activator. I thought I’d start small and easy, with Foel Fenlli just 15 minutes from my house in Mold. My wife and I popped up to Bwlch Pen Barras SJ161605 for the short walk up the hill, following the Offas Dyke path. The car park here has been recently remodelled with a big grant from the Heritage Lottery fund as part of the “Heather and Hill Forts” conservation initiative.

Foel Fenlli itself is an interesting, if very brief, walk up from the car park. As you near the top you become aware of a couple of ditch and dyke systems that surround the summit. These are the remains of the Iron Age hill fort that occupied this summit from around 2,500 years ago. More details here http://www.megalithic.co.uk/article.php?sid=5973

The small summit cairn yeilded a few good sized stones that allowed me to lodge my newly acquired 2m dipole from Sotabeams. I had it connected up to my Yaesu hand held in no time.

I settled in and sent out a CQ on the 2m FM calling channel, not knowing what to expect. I got several calls back immediately! This is good I thought. Moved up to 145.500 and immediately worked 5 people in quick succession (including one person “portable” in a pub!). When it went quiet for a while I shut down as I was already getting the feeling my wife had had enough!

I’m an International and Winter Mountain Leader, so I have come to Amateur Radio to add a new dimension to my mountaineering, rather than the other way around.

I’m planning to use a Yaesu 817-ND and move on to using SSB on 2m with a beam and hopefully HF on SSB too.

I’ll be in the Scottish Highlands for two weeks around Easter and hopefully I can activate some of the remoter hills up there as I help my wife to finish the last dozen of her Munros (Scottish peaks over 3000 foot high).

Any comments, views, help or anything about the activation of more remote Scottish mountains will be appreciated. It has been suggested that 5Mz would be good, but as a foundation licence holder this won’t be possible. Ah well, just a good excuse to move up through the system to a full licence!

Hi Gerald, two metres can be hard in the Highlands if you don’t know where the locals hide, but once you find where they accumulate you should usually be able to get enough contacts. Find a local on the band and ask where they have their net then call or QSY there. If you want to make yourself popular though get on HF. Us chasers want those uniques. 40M has been good inter G lately although sometimes 80M can be better for UK working.

Congratulations on the first activation. I look forward to meeting you down at Mold & Dist ARC sometime.

If you’re going remote (you don’t say how remote) up here in GM then expect 2m to quiet. Like your radio is broken quiet. Like you’re the only man with a radio quiet. Sad, but that’s the way it is. Closer to the bigger population centres Edinburgh/Glasgow/Aberdeen/Inverness then 2m is not so bad.

Hope you do well when you get here.

Hi Gerald, and welcome to SOTA. Be warned, it is potently addictive. Some of us have been locked away here in SOTA World for nearly ten years now and still wanting more.

I’m an International and Winter Mountain Leader, so I have come to Amateur Radio to add a new dimension to my mountaineering, rather than the other way around.

It is quite something, the number of people who were hillwalkers/mountaineers that took up amateur radio because of SOTA. A major objective of the original SOTA programme, I understand, was to get radio amateurs out doing some walking! That has happened in a huge way, but you are far from being the only to have made the ‘opposite’ step!

Moving up the licence system to get access to 5MHz and higher power isn’t the only route to HF success. If you learn CW you will have success on most HF bands with minimal power. SOTA CW is incredibly popular.

Hope you enjoy the journey!

Sad, but that’s the way it is.

No Andy that is why I keep going back. RF quiet I just cannot get at home.

Don’t scare this guy off. It sounds like he is a proper climber, not scared of heights like me and you. He might be the next man to tackle the Inn Pin. I’m already getting a bus full of chasers together for when we send him up with a handy. ;0p

In reply to MM0FMF:
Hmmmm… Think I’d better get onto HF pretty quickly!!

We’re staying near Laggan Locks and the hills on the list for for Sue are below. There’s no way we’ll do them all and the weather may not be sensible for for radio work anyway!
GM/WS-055 Sgurr Mor (Loch Quoich)
GM/WS-021 Sgurr Choinnich Mor
GM/WS-037 Am Bodach
GM/WS-049 Sgurr Eilde Mor
GM/WS-069 An Gearanach
GM/WS-087 Binnein Beag

There are a couple of other Munros we will be after, but they appear not to be SOTA summits.

If Sue gives me the chance I’ll take a few days on my own and do some of the Corbetts in the area.

He might be the next man to tackle the Inn Pin. I’m already getting a bus full of chasers together for when we send him up with a handy. ;0p

Heh heh Steve, I’ve done the In Pinn three times over the years. First time in 1989 on a full crossing of the Cullin Ridge.

That would be good - climbing up there with a radio!

The following are all the 2m contacts logged from your prospective summits.

The following are all the 2m contacts logged from your prospective
summits.

Heh heh Steve, I’ve done the In Pinn three times over the years.
First time in 1989 on a full crossing of the Cullin Ridge.

That would be good - climbing up there with a radio!

It has been done on already (I met the chap at Inverness club) but if anyone does it again I want to either be there at the bottom to work them on 2m or they will have to figure some way of doing it on HF, so everyone gets the chance to work them. I figure a balloon antenna might work on a very still day, but you would not want to be holding on to it if the wind got up. Around the World in Eighty Day help!

Thanks Tom - I have started to learn CW… but it’ll be a long haul I suspect!

Looking forward to meeting other people on the hills, whether they have a long hill going background, a long radio background or even better both!

I figure a balloon antenna might work on a very still day, but you would not
want to be holding on to it if the wind got up. Around the World in Eighty Day
help!

The antenna could be quite easy to organise (in a strangely difficult way!). It would be easy to string a line at an angle from the true summit of the Pinn to the top of Sgurr Dearg itself at an angle downwards - a long wire - with a cord on it?

You would need assistance to set it up from someone who stayed on the top of Sgurr Dearg - not sure if that is allowed?

This picture is taken from the “summit” of Sgurr Dearg - so you can see the angle and distance. 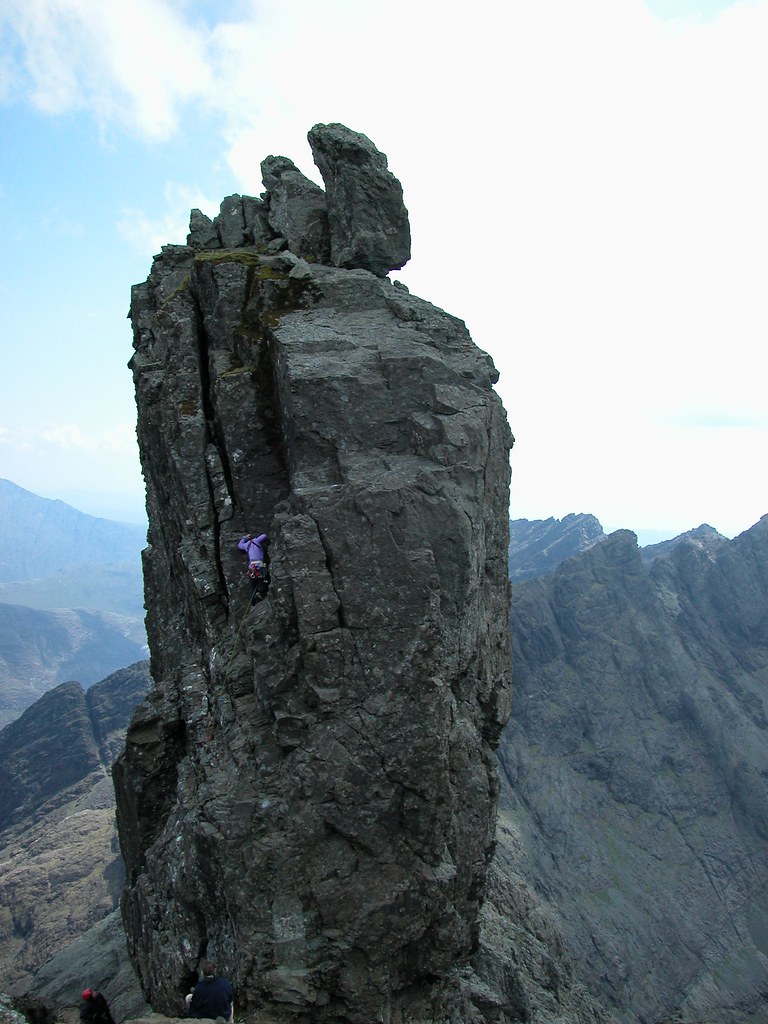 PS - how did we get from Foel Fenlli (an innocuous little heathery hill) to the In Pinn? Ha ha

In reply to MW6AQU:
Hi Gerald
Sorry about the confusion over Your callsign,having spoken to Andrew(M6AQQ)who was due to Activate GW/NW-044,I misheard your cq call and thought Andrew had gone ahead ,and was doing his first activation.
Hope to hear You Again on the summits
73`s
Bob G6ODU
P.S. glad I made into Your first summit log,CHEERS

You are most welcome Bob.

I can assure you all the confusion was mine! I’m awfully new at all this radio stuff and I have so much to learn, both technically and how to operate. I appreciate everyone putting up with me this afternoon as I fumbled my way through.

Andrew (M6AQQ) and I did our Foundation exam together (although I suspect you may know that).

Glad to hear that the activation went well. It was good to meet you the other day.

Good to have you on board and well done on the first activation. As Tom says, SOTA is highly addictive and there no pills available either on prescription or on the web to help you get over it. Just go with the flow and do your own thing.

Best wishes for the GM trip - hope you make some good contacts.

In reply to MW6AQU:
Hi Gerald, i’ll certinly be listening out for you here in GM/NS, im about 20miles north of Inverness, and as Andy mentioned already, the local net is 145.575fm!

Hi Adrian - I’ll do my best to get calls in that direction - I should have a small beam with me, so I might get lucky on some of the northern summits and make the “trip” to Inverness. Thanks to you and Andy for the tip on the frequency to try.

I’ll do my best to use the Alerts system.