The MTR4B is available now - it looks very nice

- at least for me

It looks great, and I’m sure it will perform as well as the other MTR radios !
If I didn’t have a KX1 already, I would buy one…love small compact radios !!

Correct, but you may have overlooked that:
http://reflector.sota.org.uk/t/no-april-fools/?source_topic_id=14394

BTW, some nice features of the new MTR4B:

Further I’ve asked Steve whether an 80/60m conversion would be possible without touching the code.
Answer pending.

Are you saying the MTR-5B is an April fools joke Heinz? It looks quite authentic on the website, complete with manual etc.

Are you saying the MTR-5B is an April fools joke Heinz? It looks quite authentic on the website, complete with manual etc.

Well, I can understand when busy readers read No April fools! as April fools! and when non CW hams are not aware that the MTR5B is on air for more than one year (first built from kit). Ok?

The 5B is electrically almost identical.

Steve explained the reasons for releasing the new 4 band rig -

1.The 5B code does support 80m but the rig needs modification to work on that band (RX BPF and TX LPF). A number of MTR5B kit purchasers stated the desire for 80m operation and actually did a group buy of filter components. I think this gave Steve the impression of a demand for 80m capability in a trail rig, especially in Europe.

2 The MTR 5B from LNR (not the limited initial kit) used an LCD with a blue back light, this was unpopular, especially as the window in the case was too big, allowing bright light to be emitted around the edge of the display.

3 A source of 4 position switches were found which makes band switching much easier, using one bank of three switches, rather than two banks.

I think the MTR 5B is a cool rig, I’m sure the 4B will also be popular. The LCD on the 4B is only 2 lines, whilst on the 5B, the display has 4 lines. The characters are quite small on the 4 line display, so I guess they’ll be a bit bigger on the 2 line display, making them easier to see.

A thing to note is that the 98 initial kits (not LNR Precision) has a different LCD to the later LNR Precision version.

The 2 line display apparently has a different pin-out to the 4 line displays, so retrofitting is not possible to the MTR5B without serious hacking.

IMHO, the MTR4B is just as valuable as the MTR5B due to the nicer case and the different LCD might be better for some people. 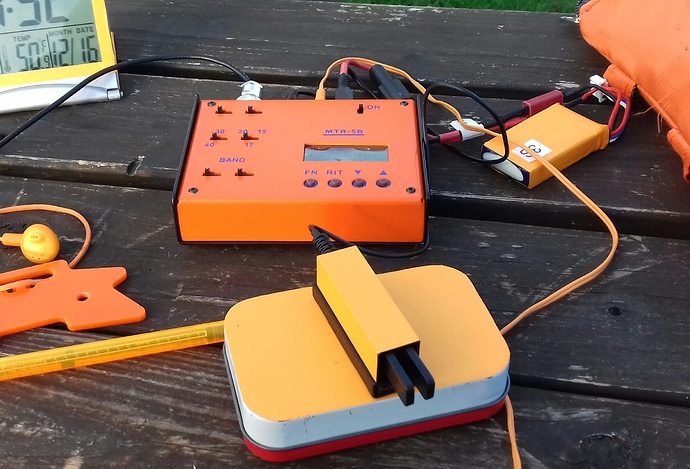 Further I’ve asked Steve whether an 80/60m conversion would be possible without touching the code.

To summarize the answers got on
https://groups.yahoo.com/neo/groups/AT_Sprint/conversations/topics/17318

Steve KD1JV said
NO, that band is not included in the program. …

Colin G8TMV said
I did a software update (and provided filter values) to add
the 60m band to both the ATS3B and the original MTR. …

So I would like to encourage the experts among us to make the MTR4B 80/60m (WRC-2015) conversion possible soon. Thanks!

I’m sure it would be easy enough to convert to 60m.
I changed my MTR(2) to 60, and the hardest part was working out the filter details.
Changing the softwrae was very easy, even for a rusty programmer like me.

I’m sure someone with a MTR4 will make it happen very quickly. 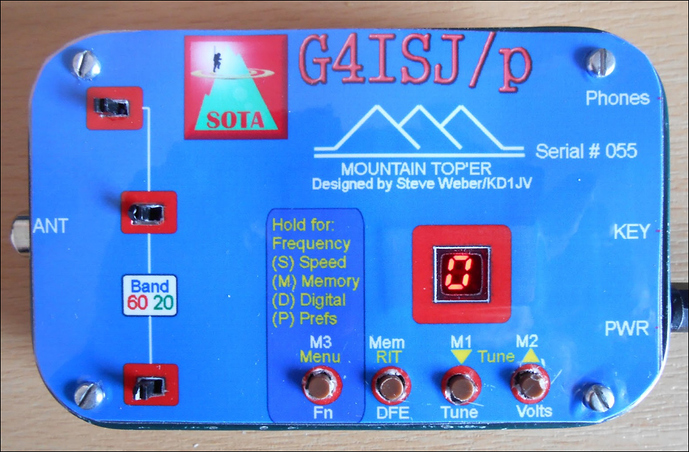 Haven’t weighed an LNR Precision MTR-5B but my kit version with home brew case weighs 165g. This was a different one I built with rotary encoder - 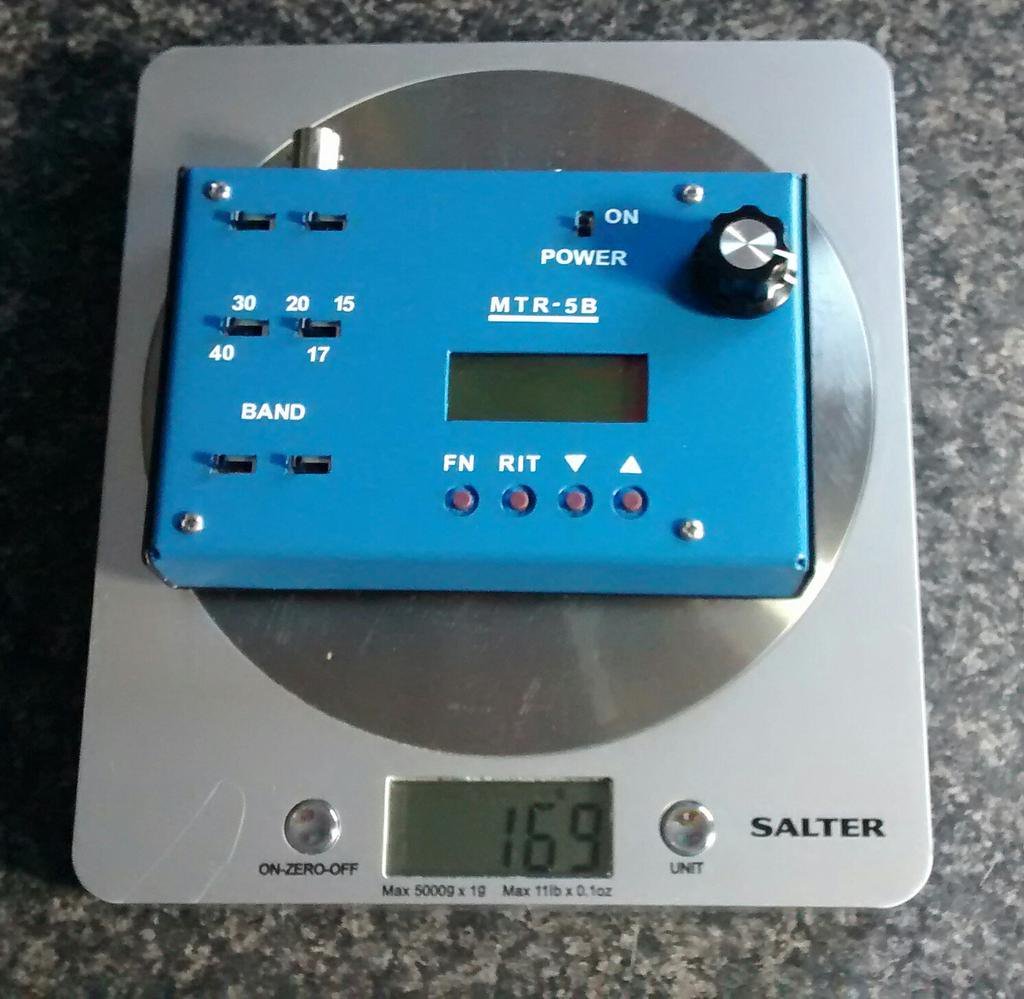 Note that not only is the weight saving on the rig, but these rigs are highly efficient, using very little current, so allowing the use of some very small batteries. As a guide, I’d expect the MTR4B to consume <20mA in RX and much less than 1A in TX. A good battery that should last all weekend will weigh less than 100g!

Here is a chart that I put together for SPRAT magazine with measurements from my kit built MTR5B. 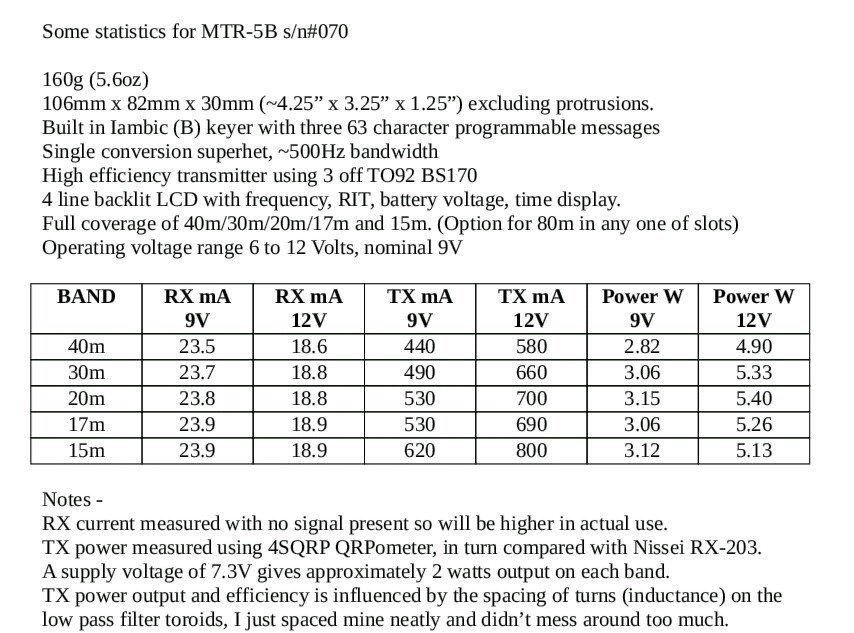 Ah yes, but is someone really going to do CW, SSB, FM, AM on multiple bands between 160m and 70 cm during an activation? I used to take my FT817 on hills to do 5w CW as my home brew rigs couldn’t reach that power level. Now I can save the weight and take an MTR instead

but is someone really going to do CW, SSB, FM, AM on multiple bands between 160m and 70 cm

But it’s a different use case Colin. I did think of acquiring an MTR but the current price is a bit steep for what it is IMHO. But I have far too many pieces of gear that don’t get used that I need to reduce not increase the number of radios.

Very true. I guess it will depend on the intended usage but in my case it seems to fit the bill.

But I have far too many pieces of gear that don’t get used that I need to reduce not increase the number of radios.

Same situation for me, Andy.

But the conversion to 60m and in particular the free space inside the MTR4B is a great challenge to fill up with something special,
e.g. a next generation battery, paddle, speaker, wireless phones & paddle & station control, …

I think they are quite reasonably priced for what they are. They must be made in very small production runs and they are far from an easy build having a double sided smd board and lots of components that can only be hand assembled. I suspect that only one smd side can be done with a pick and place machine. It is unrealistic to compare them with a mass produced, mass market, radio like an FT817.

We’ll have to disagree then. I wouldn’t pay £310 for what you get. It’s not that it’s not a good radio or the people involved are profiteering. No, but it’s over half the price on an 817. And don’t forget, with an 817 you get significantly more weight and volume to the radio. And weight (and current draw) is something that is very sadly lacking on these trails radios.

is someone really going to do CW, SSB, FM, AM on multiple bands between 160m and 70 cm during an activation?

Maybe; maybe not. My point was merely that comparing the size and weight of a rig designed to give you that capability/flexibility with a rig designed for a much more limited flexibility isn’t valid. They’re both good radios in their own way (with compromises as always)