btw: The 4B V2 is said to include an SWR indicator and an RTC.

I purchased the last MTR3B in August or there about. When I inquired about future availability LNR responded that they are shifting to the 4b production run. They didn’t say weather that was the end of 3b’s for good or just for now.

MTR3b_LCD (8/28/20): We have completed the current production run of the massively popular MTR3b_LCD. The newly re-design of the MTR4b (version 2) contains all the features of the MTR3b_LCD plus additional functions so in many ways it will serve as a replacement of the 3b. However, we acknowledge the lower price point and slightly smaller enclosure. We are considering another run of the MTR3b_LCD, but it will not occur until 2022, if at all.

We are considering another run of the MTR3b_LCD, but it will not occur until 2022, if at all.

I have a feeling used MTR3b LCD units will be going for at least what the seller originally paid after this announcement.

I hope they will run another batch of the 3B-LCD. If not, it may be time to build one from scratch - after all, the schematics are available, the firmware too, and a new PCB design with smaller SMD parts could be maybe 20 - 40 % smaller than the current MTR-3B.

It would be very cool if they could make the MTR3b even smaller. I would probably buy an LCD version as it is, but if it was even smaller it would be top of my list. As QRP Labs have shown, miniaturisation can breath new life into old products.
73 de OE6FEG
Matt

Yes, as said, I think there is ample room for making the MTR3B smaller. The current PCB uses rather large SMD components and generous spacing to accommodate for the “SMD allergy” by many long-term ham radio operators. You could likely bring it down to 60 % of the current size with a single board; one may have to put some parts on a second board (LCD, buttons). But I think that a square version of 65 x 65 mm or so of the LCD version would be a real beauty.

And if LNR does not make it, we could also ask Steve Weber for permission and do it as a community project. The only tricky thing is soldering the AD9834 DDS chip, which is a 20-lead TSSOP and thus pretty small.

Also, it might be worthwhile replacing the MSP430 CPU by an ATtiny or similar and port/adapt the firmware from the Soda Pop rig, because modifying the MSP430 assembler firmware could be burdensome.

I designed and built a dual band cw rig that there is a photo of here.

The schematic is here. The whole thing fits in a 1020 peli case with LiFePo battery.

I am currently building 2 more of them (20/30m verisons) to fully check the schematic and my notes. I want to make this fully open source and share all the details, but at the moment my notes aren’t good enough. However, if anyone knows what they are doing with SMD soldering of fine pitch ICs and 0603 and has some general RF debugging skills, I have 2 spare PCBs…

I designed and built a dual band cw rig that there is a photo of here .

The schematic is here . The whole thing fits in a 1020 peli case with LiFePo battery.

This is a REALLY cool project! For quite a while, I have been thinking of a more compact transceiver similar to the MTR or Soda pop, with an integrated SWR indicator and modern power management.

Maybe we could add a DC-DC step-up converter with strong filtering, like my

and a USB charger (off the box PCB or to be added to the PCB). This would provide clean and stable 12V, enough for 5 W from Steve Weber’s design, independent of the charge status of the battery.

My current dream project is putting the MTR-3B LCD into a Peli 1020 case, same as I did for the Tiny SOTA station described here:

Thanks for all your kind feedback! Today, I managed to mount everything on the new front panel. The total station weight is now 329 g including the MTR-3B, TinySWR indicator, 2S 1000 mAh Lipo battery, DC-DC- boost converter for 9 and 12 V, Palm Pico Single, retractable earphones, volume control, and balanced charger that can be powered by a simple MicroUSB port; all in a watertight and extremely robust enclosure. Attached, please find a few snapshots of the final result. 73 de Martin, DK3IT P…

It will require a bit of additional work, because of the second PCB inside the LCD version, but would then combine the best of both world from the 5B and the 3B. 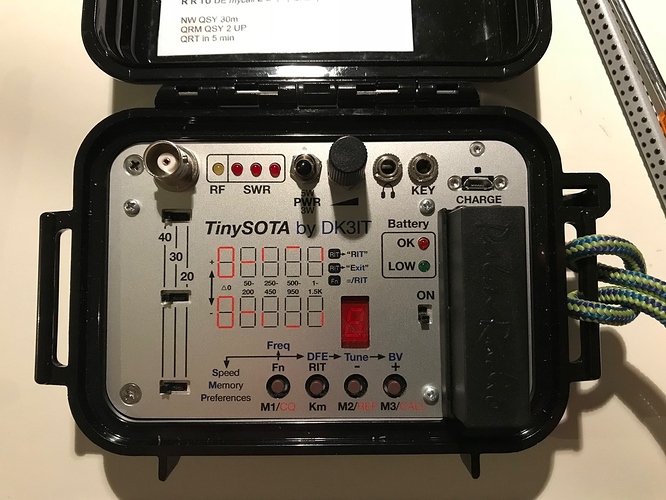 LNR now taking orders for the new MTR4 V2, but for USA only

I got a colleague in the US to purchase an MTR 3B-LCD for me back in March, with the plan I would pick it up next time I saw him. We’re on a project together at work that had us travelling between UK and US, and were due to see each other within a few months. That hasn’t quite panned out(!) and he still has my brand new rig. Fortunately, he’s not a ham so doesn’t know they’ve become unobtanium! I haven’t got far enough on my morse journey yet to be able to use it. Hopefully by the time we get to see each other again I will have, and will have a brand new rig to enjoy!

@DK3IT Where did you see the diagram and fw ?
I’d be interested to see what’s inside …

The firmware and schematics are available on the AT Sprint Groups.IO reflector for the original kit MTRs. The firmware for the LNR MTRs is closely related to the kit MTRs but has not been released. The difference is the display used and pin out assignments. The new MTR-4B will have additional tweaks for the new features.

Anybody know how much cash it would take to buy an LNR Precision MTR-3B? I can’t seem to find any ballpark figures from previous sales.