I choose to activate Mt. Zarranzmendi because it had been activated just 3 times in the past, and it was not far from my home QTH.

Apart from that, the fact that the summit is well covered with trees and the high temperatures forecasted for the day (36 C) convinced me to do this activation under the shadow of high trees.

This lovely sunrise in my window announced the day would be great: 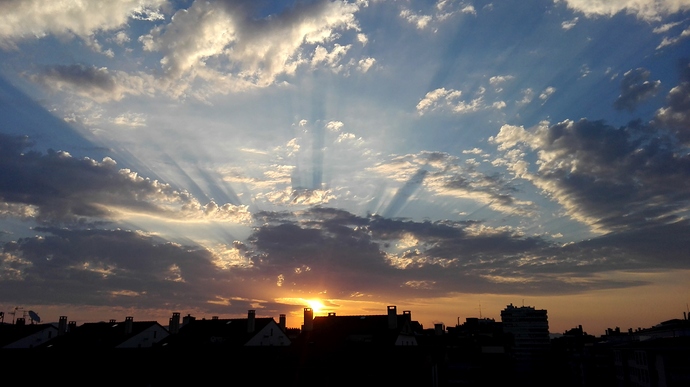 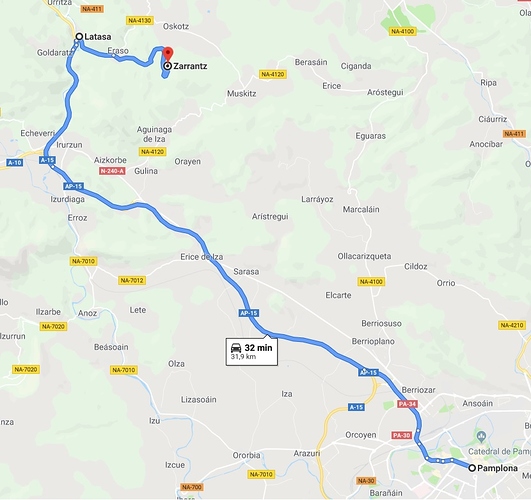 • Leave Pamplona towards San Sebastian (road PA-34, then AP-15)
• Take the exit 117 towards Latasa
• Follow the road NA-4130 and take deviation right towards Zarranz following the road NA-4131.
• Once in Zarranz, park next the church in the center of the small village. 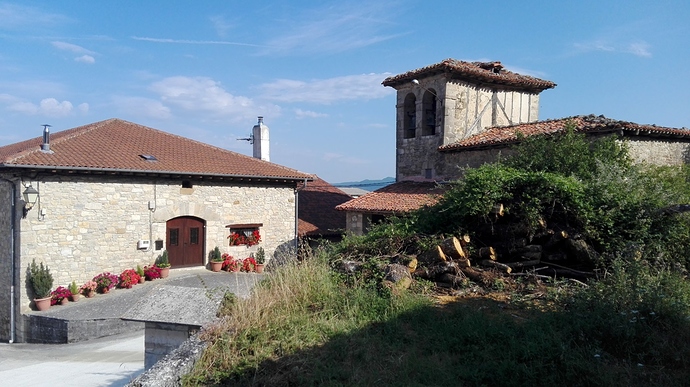 This is an easy climb, following a path at the very start and later a unobstructed way on the forest.

At mid way up, there is a very steep part in the forest. I think that would be hard to cross with wet weather, but today it was all dry.

Although there is no view to the valley all along the way up, the bleech forest was really nice with all that bright green color: 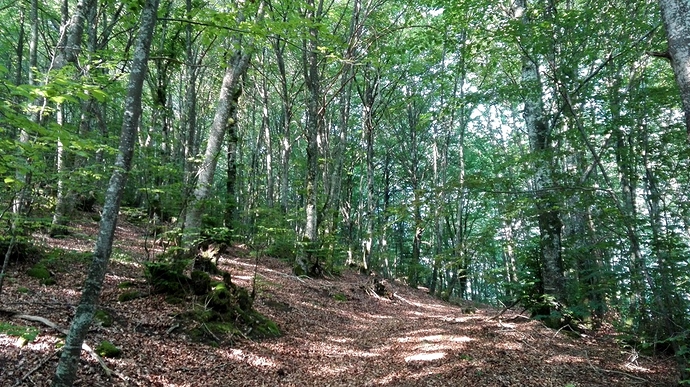 The summit is well marked with a nice mailbox peak with the shape of a big metallic mushroom: 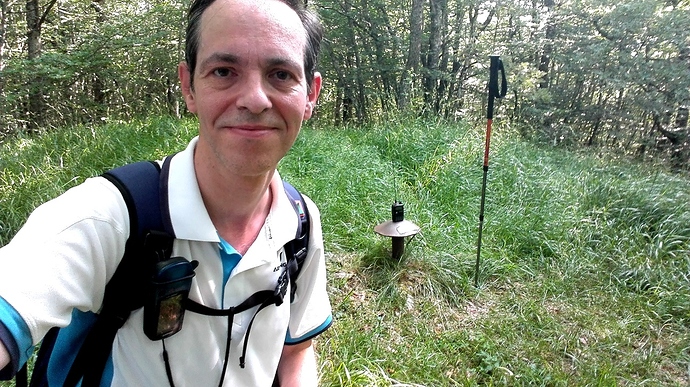 Although the summit is also surrounded by trees, it is not very dense area, which makes it helpful to deploy my end fed half wave antenna on inverted vee configuration using a carbon fiber 5 m light fishpole. See how it became camouflaged between the trees: 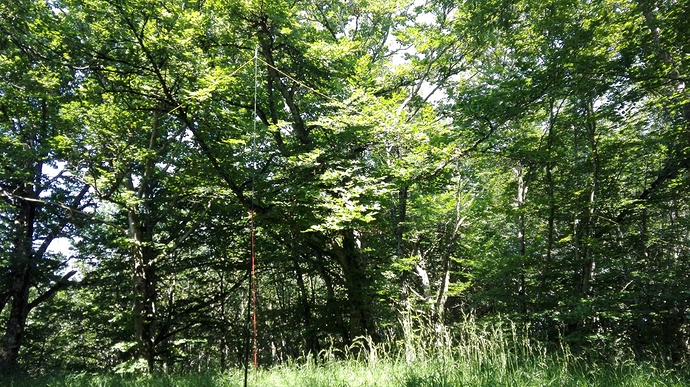 Mobile phone network was working intermittent during the morning, making it difficult to self spot at times.

In the very start of the activation I found S52CU/P calling on 10 MHz from BR-034. Glad to get Mirko in my log as a starter!

Then I moved to 14 MHz CW as I intended to start on that band. To my joy I found there Heinz, HB9BCB/P on BE-120. I was very glad to log this prolific activator and neat parts builder as I hadn’t talked with him since very long.

Later I moved up and started calling CQ, logging 38 chasers in 37 minutes.

I then moved to 7 MHz SSB where I logged 6 stations in 4 minutes, becoming dead afterwards. A look at Sotawatch revealed Rudolf DL/OE7RDI/P activating further up in the band from DL/EW-001, and after some difficulties I logged the S2S.

Well, I had been active already on 7, 10 and 14 MHz, therefore I spend some minutes going up and down, logging Kurt F/HB9AFI/P from JU-009, Luk OK/DD1LD/P in PL-002 and Karl DL/OE5JKL/P in a GMA reference. It seems many activators are travelling abroad with a portable setup, hi!
While dismantling the antenna I logged my last qso on my VHF handheld with Santi, EA2BSB, one of the few activators of this summit in the past.

All in all, 63 qso in my log, in a very amusing morning, scrolling up and down the bands, plenty of fun and activity.

On the way down I could see some other SOTA summits: 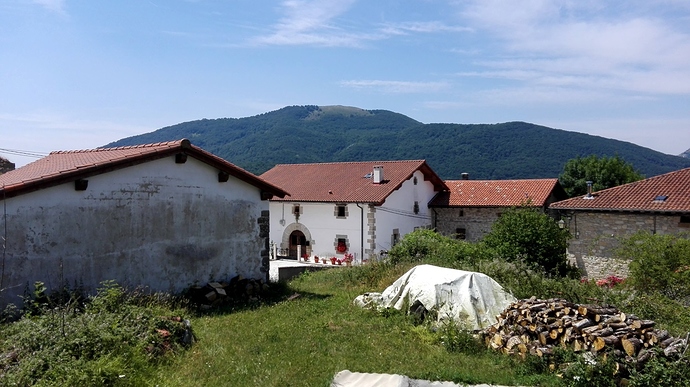 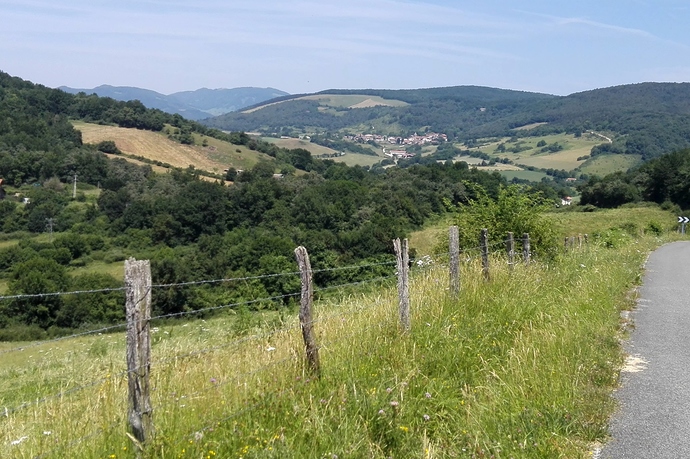 Ethnological tip of the day:

Back in Zarranz, I approached to see an old washing place, next the church. They were very used during the 19th century, when there weren’t automatic washing machine available and people used to wash by hand in these reservoirs. That was a big improvement compared with old times when women used to wash clothing on the rivers. 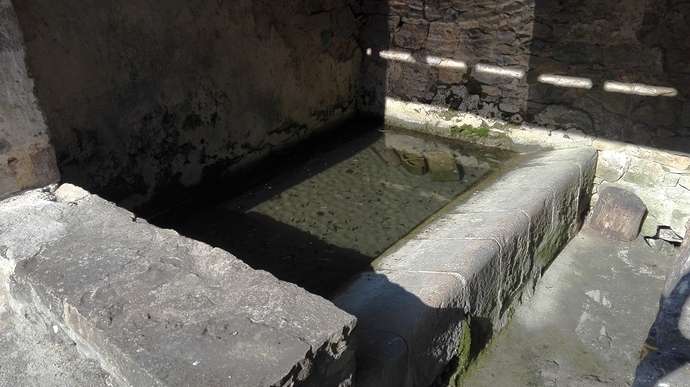 73 and see you soon, Ignacio

Ps: one of the spots I sent using my Sota spotter app was wrongly identifying my summit as NV-138. Later I could self spot again with the rigth reference NV-123; I hope my chasers found the mistake by looking at the spots.

Nice micro-adventure Ignacio.
Congrats for all these 63 QSO’s and tnx for show us this amazing pics about Zarranzmendi.

Nice to see the report.
Area looks nearly as green as Ireland.
Thank you for the QSO, as it was only my second day of SOTA chasing, and my 3rd ever summit… apologies for any bad CW, as after a 25 year layoff, I am very rusty. Only using wire antennas at 30ft and 50w at most.

Hi Aengus
you sounded really well and consistent; I remember the qso.
I am glad to know this was your third chase. I am sure you are going to enjoy this a lot.
Myself, being an activator and chaser, everytime I work a SOTA from home I guess how the day will be like in the activator’s end.
That’s why I like to publish a report, at least for every new summit I am on, so that all can see how this looks like.

Great to have you in my log, and looking forward to many more!
Some years ago it wasn’t frequent to have an EI chaser in an activation. Now, luckily it is becoming less rare.