We got a sunny day today and after getting the green card from my xyl, I prepared to go out and activate something not far from home.
Hi chose for today the 4 pointer which is close towards the West to the one I activated last weekend. 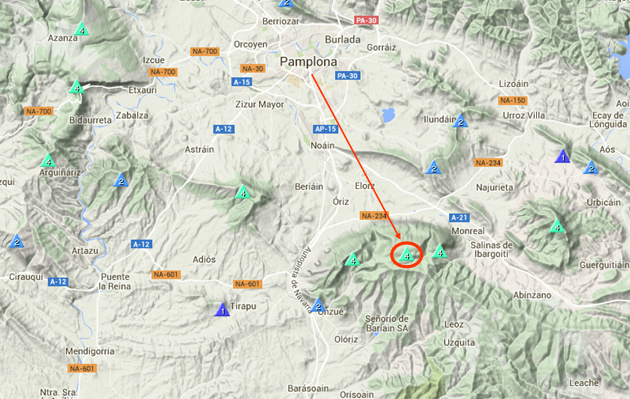 I think, next weekend, I’ll have to activate the other one towards the West, in order to put on air those 3 four pointers in a row before it expires the season bonus period and get those 3x(4+3)=21 points.

First of all, let me apologize because I’ve got some sort of hair or debris on the lens inside my camera and all the pics have it right in the middle of the blue sky. I had it there some few weeks ago, and managed to move it off scene by tapping on the camera, but it has moved and decided to be back again into scene. I’ll have to figure out how to open the camera and get that thing out of it.

Well, despite the sunshine, I still found some snow from previous days, but it was very little and it was not a problem at all in today’s great sunshine.

In order to be out of the wind, I set-up in this sheltered place which is not the very summit but it’s very near, well within the AZ. 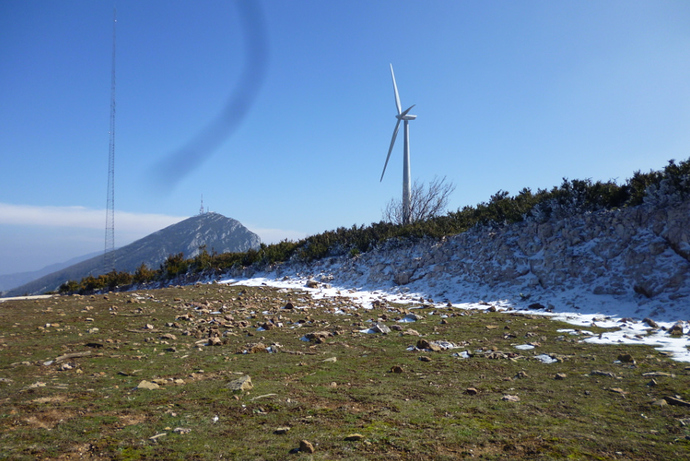 The station was my usual SOTA-kit inside the rucksack with an FT-817ND @ 5 watts and as aerial, a sloper endfed wire with its end at the top of my formerly 7m, now 6,84m long fishing rod. 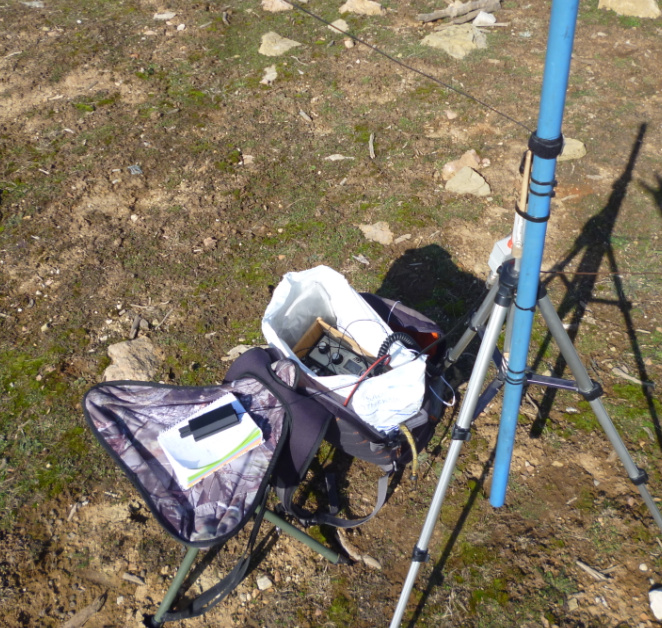 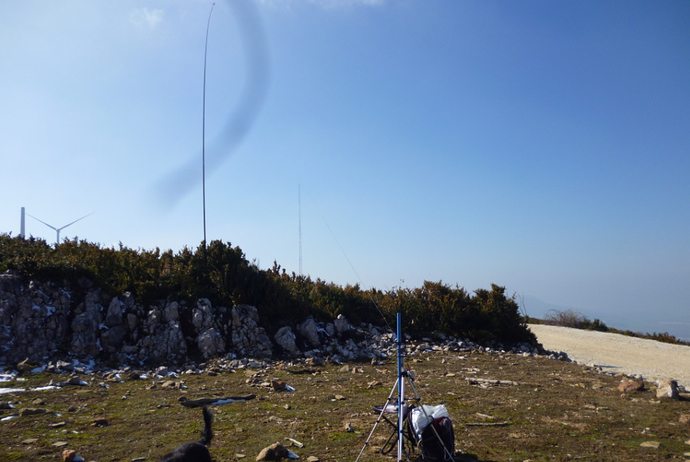 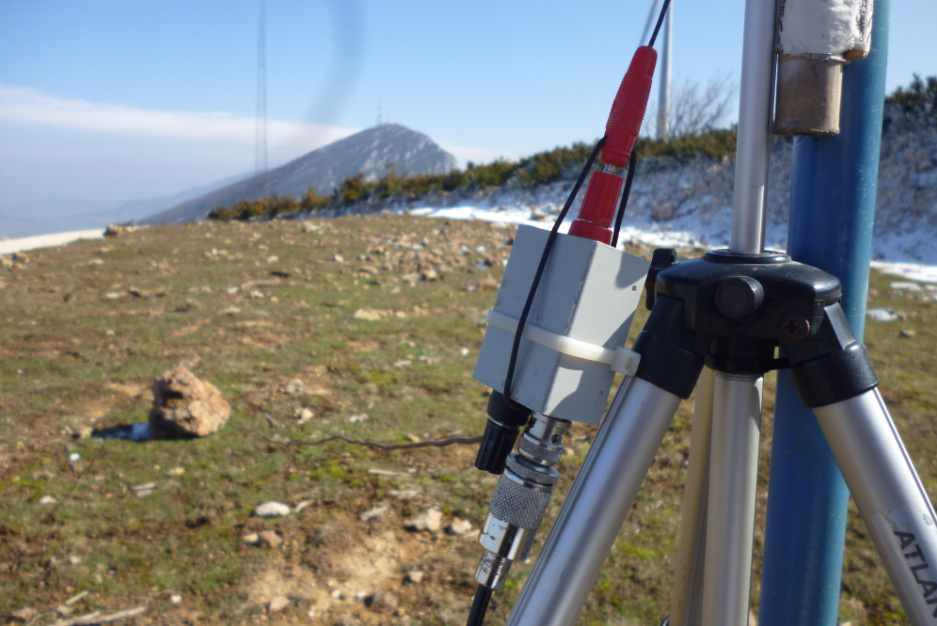 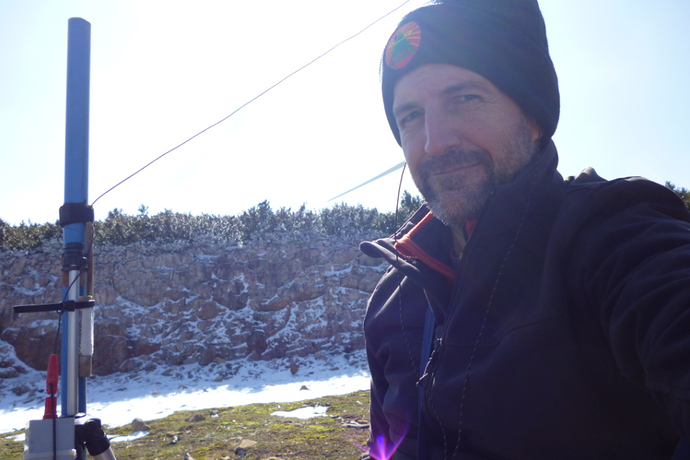 I started the operation on 40m CW a few minutes earlier than my alerted start time of 12h00, got spotted by RBNHole

Next band was 30m and RBNHole spotted me again

there I logged 8 QSOs in a 14 minutes run. At 12h26, while I was having my QSO with @DJ5AA, a big wild boar showed up from the bushes about 30m in front of me. It suddenly stopped as soon as it spotted me but it immediately decided that I wasn’t any threat and crossed from right to left in front of me until it disappeared downhill. It was big, very big with some visible and impressive fangs. I guess it would easily weight 80 to 100 Kg.
A few minutes later, a chasing dog showed up exactly through the same bushes the wild boar did and also crossed to the left in front of me to follow the wild boar downhill.

When there were no more chasers, I QSYed to 20m SSB and called CQ witout success for a while on 14.305, but given the lack of chasers and the impossibility for me to send a self-spot, I looked and found on SOTAwatch that there was an activation on 14.280, so I QSYed and successfully completed S2S QSO with Stavros SV2RUJ/P.
Then I saw on SOTAwatch a spot for DK7MG/P activating on 30m, so I QSYed to the spotted frequency and found nothing of him. While waiting for him to show up, I found and completed S2S QSO with Juerg HB9BIN/P, who had probably QSYed to that same frequency looking for DK7MG/P. He didn’t show up but we took advantage and didn’t waste our time

After this unexpected very welcome S2S QSO, I QSYed to 20m CW and started CQing.
RBNHole spotted me right away:

20m CW let me log 15 QSOs in 20 minutes, including the one and only DX of the day with George N1GB, who was coming weaker than usual but enough to complete the QSO.
When 20m CW dried up, I found on SOTAwatch that Antonio EC2AG/P was activating on SSB, so I QSYed to see if I could copy him despite him being only about 150 Km from me.
To my surprise we copied with signal reports 42 each other and we completed what it was the 7th S2S QSO of the day.
It had been quite a long time since we last had a SOTA QSO and it was very nice to meet again on the air. Thanks Antonio
This is the full log of today’s activation: 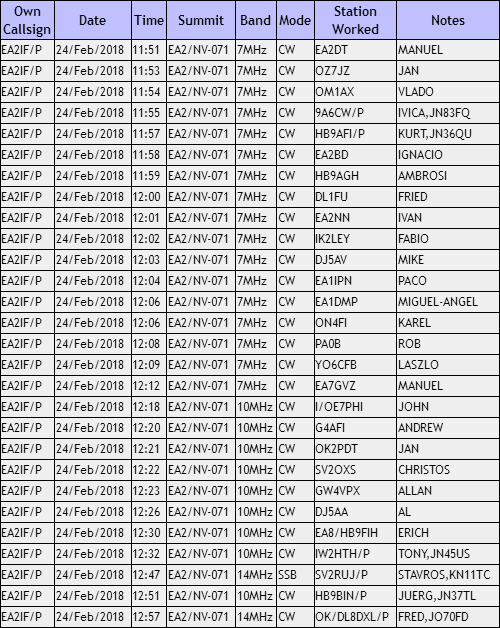 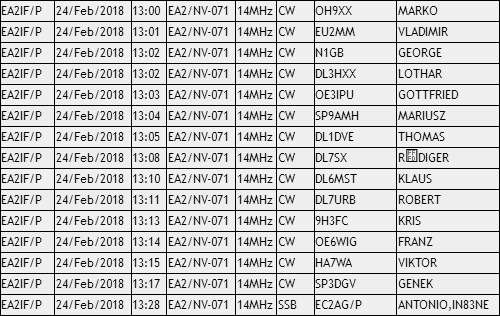 Before leaving, a selfie of the happy activator: 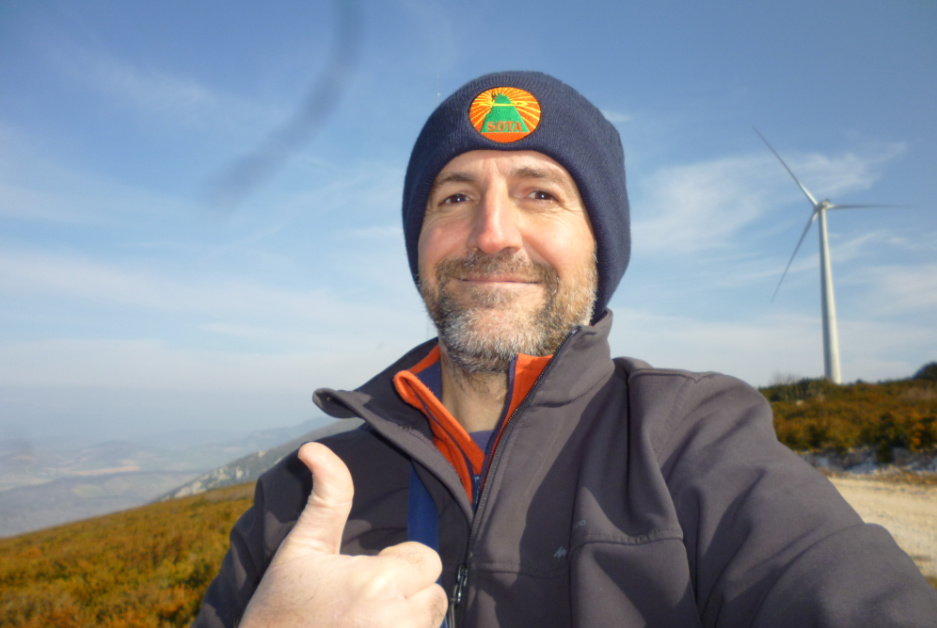 Thank you dear chasers and I look forward to QSO with you again soon.
73,

Once again, thanks for the summit, Guru!
A question: the antenna is a EFHW or simply an EF with un-un?
Cuagn soon 73
Fabio

Ciao Fabio.
Very pleased to QSO with you again yesterday.
This is the home brewed antenna I was using:
http://www.earchi.org/92011endfedfiles/Endfed6_40.pdf

The length of the radiating wire is 10m and I always extend a 7m counterpoise wire, which makes a great difference despite the antenna construction guide saying it doesn’t need it because the coax braid of a 5 m long coax line will act as a counterpoise.
I have tried this antenna with a 5m coax line and no counterpoise wire and I can assure you it’s much more efficient as I have it now, with about 0,75 cm of RG58 coax to the antenna tunner and the 7m long counterpoise wire connected to the black socket you can see in the metal box with the 9:1 UN-UN. 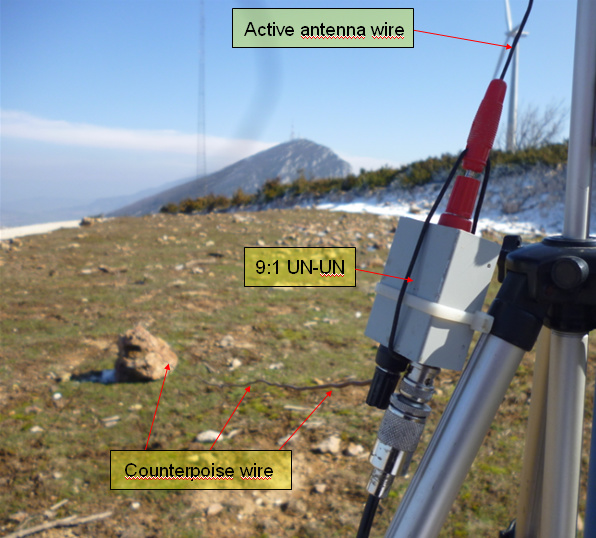 This antenna gives me great performance on all bands without needing to open-close any links or needing to do any adjustments when changing bands, other that adapting my antenna tuner settings. But this is something really quick and easy to do once you have learnt how your whole antenna set-up works on each band. Adjusting the antenna tuner at each band change, usually takes me just a few seconds (5s or so)

Thanks, it’s the antenna I’m using in my balcony, but 16.2 metres long…Maybe I will try in some activations…Have a nice sunday!

It’s also the antenna I have in my balcony. Mine has 14m of wire in the active radiating wire and for the counterpoise, it’s connected to the steel balcony fence.
Have a nice Sunday you too.
73,