There are few uniques left for me to activate within a 35Km radius circle from my QTH and 2 low scorers were found pretty close to each other, so I decided to try both in a single day. Better said, in a morning, as I had to be home for lunch with family.
You’ll see here these 2 summits and their location with respect to my QTH and the city of Pamplona: 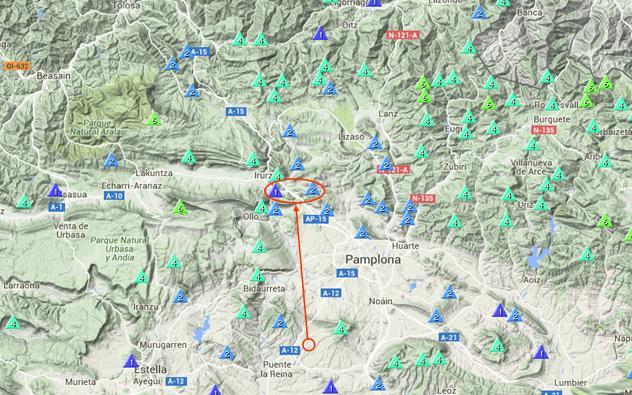 I had set the alarm by 5h00 utc, but after having been chasing some Northamerican activators late after our local midnight (22h30 utc) while charging battery, preparing the GPS tracks and all the stuff for the following morning activations, it took me a few minutes to overcome the weight of my body and take off from bed, but I finally made it by 7h20 or so (local) 5h20 utc…

I wasn’t sure on which I would activate first and I finally decided to start by the one pointer. This picture I took later from the second summit of the day shows very well on the right hand side the first target of the day Mt. Sarobe EA2/NV-150, as well as some other nearby SOTAs. 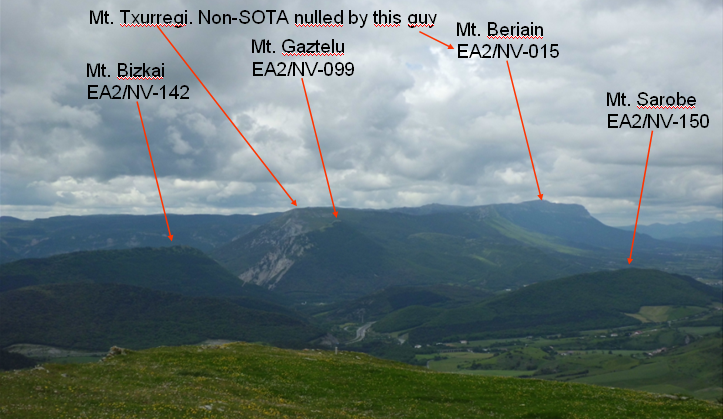 Firstly I drove to the point in the N240-A where the entrance of the village of Aizkorbe is, but there’s no need to enter the village, as the track starts just across the road.
This is the GPS track I followed through a beautiful oak trees forest: 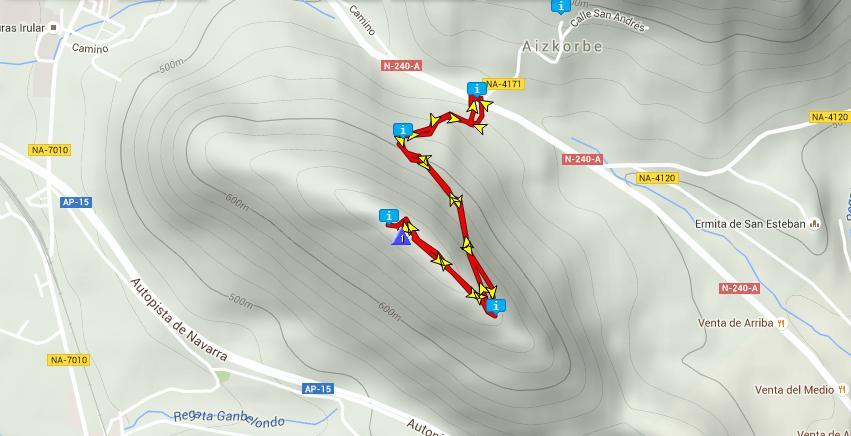 The ascent of the 184m elevation difference between the start point and the summit took me almost 35 minutes. Exactly 34min 46s at an averaged heart beat rate of 124 BPM with a maximum of 145 BPM. Not too demanding at all. 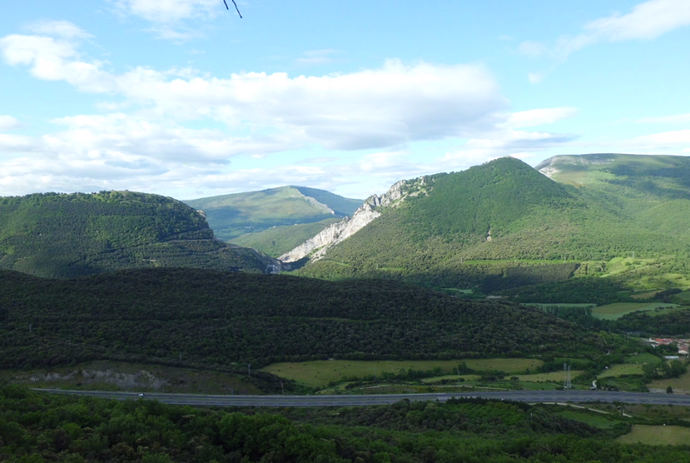 This one shows Mt. Beriain EA2/NV-015 with its summit inside the approaching clouds at the right end of the long ridge. 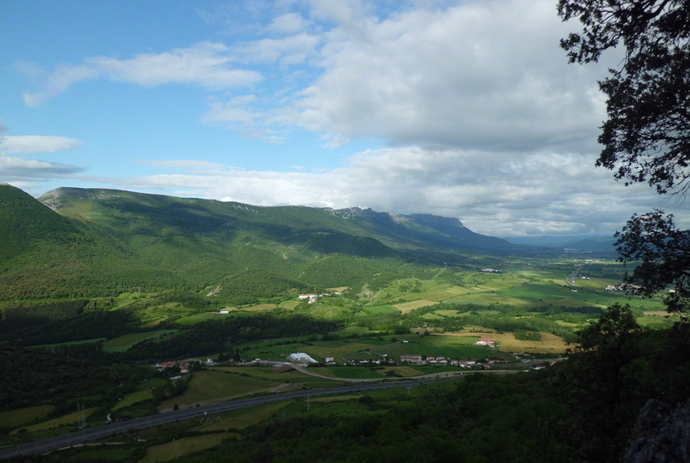 I soon was welcome by the summit inhabitants. I must admit I didn’t ask them for permission to access and operate from their summit. I hope the activation will still be valid as they didn’t show me any paper proving their ownership 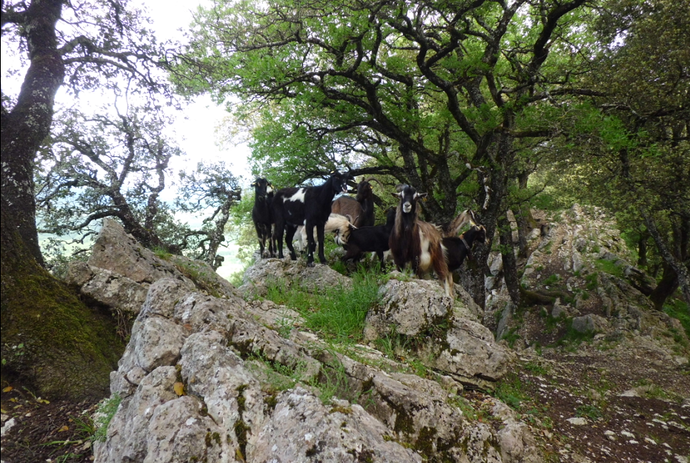 The one staring at me, at the right hand side of the picture, was clearly the leader of the pack.
I placed my rucksack on the ground close to a slightly elevated area which soon was occupied by the goats. I wasn’t even worried by their presence and started to prepare for setting up my gear without paying any attention to what the goats were doing.
I was wearing an EA2 SOTA baseball hat and I was looking down into my rucksack to take something out of it when I suddenly felt that something tapped on top of my head. I looked up and found the leader goat very close right in front of me. It had gently tapped with his head on mine as whether seizing my intentions about a potential fight or about my strength/determination to stay in their territory.
I waved my arms while shouting out loud some words and they all run away.
But they kept stubbornly approaching, so I finally tied my dog Lucho very close to me during the operation in order to prevent from being bothered by the goats in the middle of the pile-up.
I didn’t want to let my dog free because there were some very young little goats around and I didn’t want to have any problem with them being damaged by my dog, as it happened with a couple of very young lambs several months ago.

Possibly, due to the short length of coax I have now in order to be able to tune my endfed antenna on 17m, together with some irregularities on the terrain and the presence of the goats restricting a bit my freedom of movements and positioning, as I always wanted to face them, I finally sat down on the ground in a pretty uncomfortable position.
I run most of the operation in a really unergonomical position and at one point I had to change position due to being unable to keep like that any longer. Then I sat down on a sharpy and highly uncomfortable rock I had close to me, but at least I could lay my back against a tree trunck, which was a good relief.
Despite all these little inconveniences that sometimes arise in the “hard” life of a SOTA activator ;-), I managed to fill the log with a pretty good number of QSOs after having worked 20m SSB, 17m CW and 30m (CW): 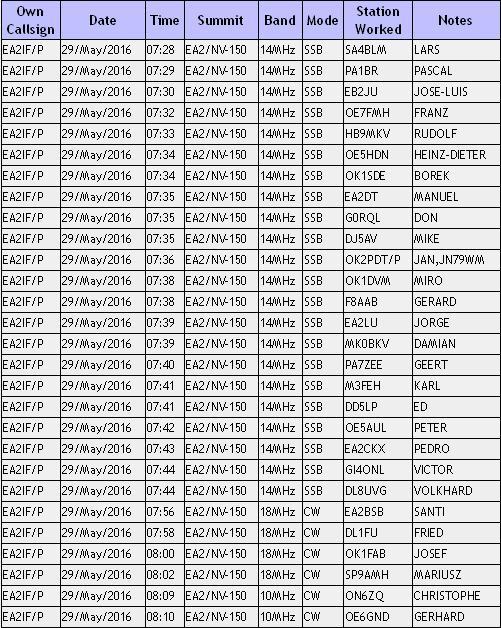 I also had a nice S2S QSO with Jan OK2PDT:

I heard Jan because I asked for QRX looking for any /P or S2S station calling and the whole pile-up remained respectfully quiet, for which I thanked them on air and I do it again now.

I quickly packed and descended as I had another activation to do.
When I was almost down and delighted with the walk inside the oak trees forest, I couldn’t resist taking this nice picture: 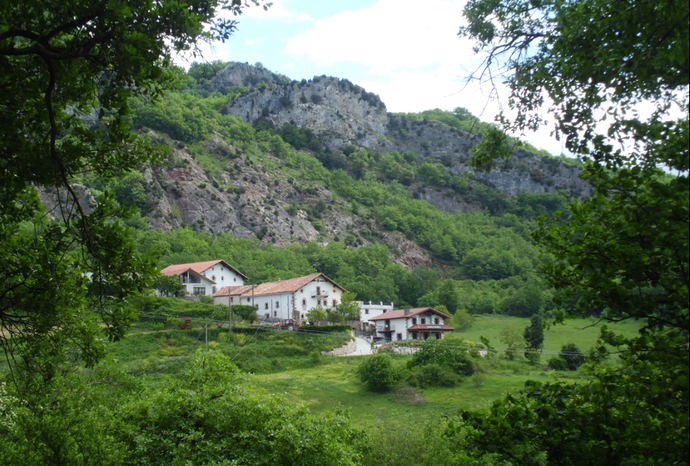 As soon as I got to the car, I drove the nearly 15Km to the small village of Osinaga, which is where I was going to start the hike of Mt. Harriaundi EA2/NV-108.
This is the mountain seen from the road as I was approaching the start point: 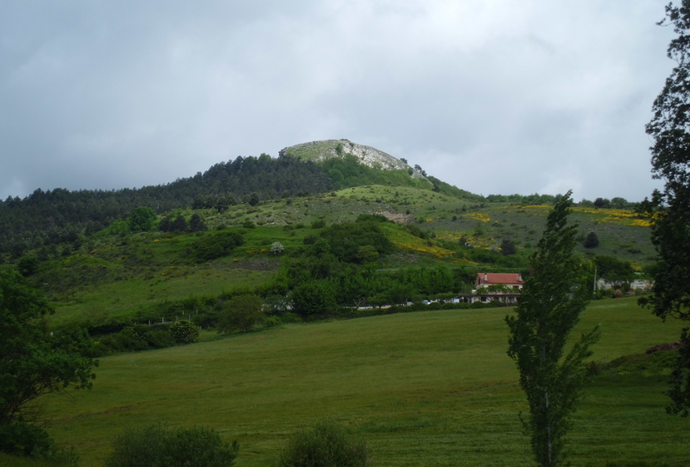 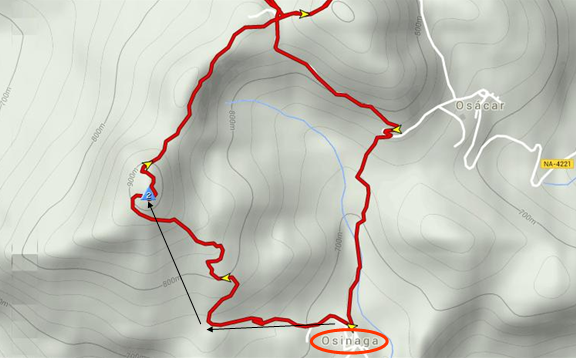 When I had hiked about 200m from the car, I recalled that I had forgotten my fishing pole ring, which I thought I may need because I didn’t see any trees on the summit, so I descended, took the ring and started the hike again.
The 408m of levation ascent was pretty easy to follow through cattle tracks with not too steep slopes, despite the hard look of this profile of the track I followed.

Total time of the ascent, including my coming back to the car to pick up the fishing pole ring was 38 minutes, at an averaged heart beat rate of 139 BPM with a maximum of 157 BPM. Again, not too demanding.

As soon as I reached the summit it started to rain. 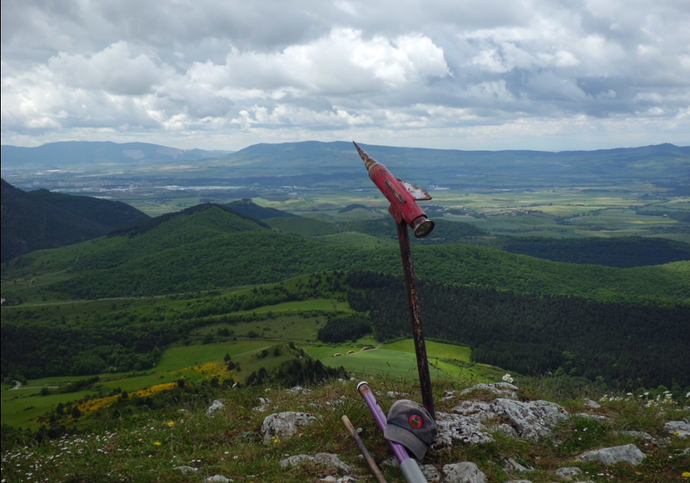 I found the views from this summit particularly beautiful. It’s a very open summit providing views in almost 360°. Let me share with you some of these views: 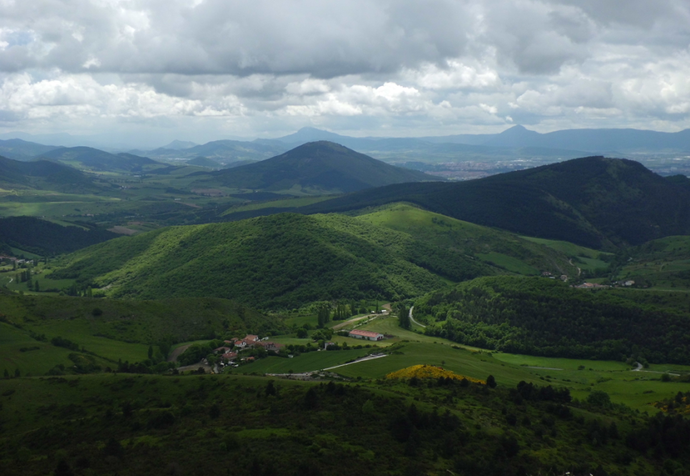 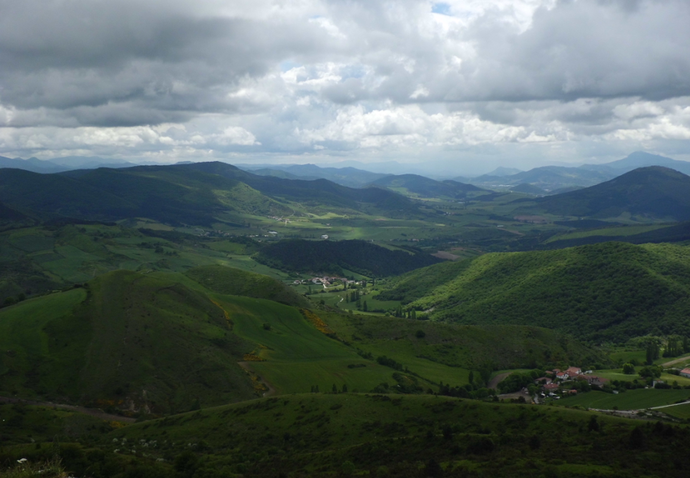 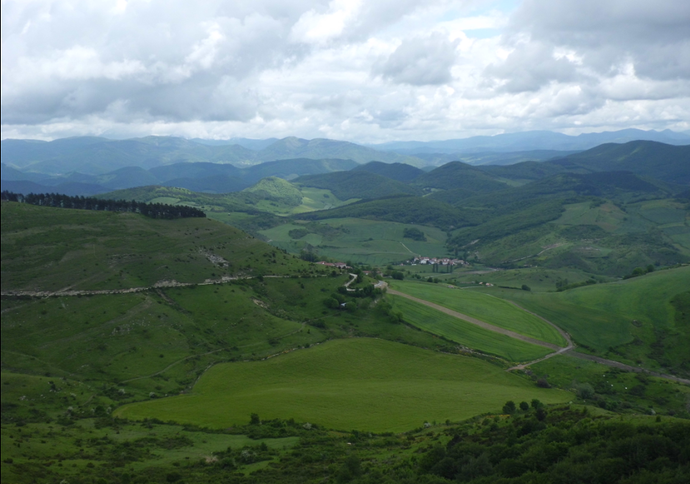 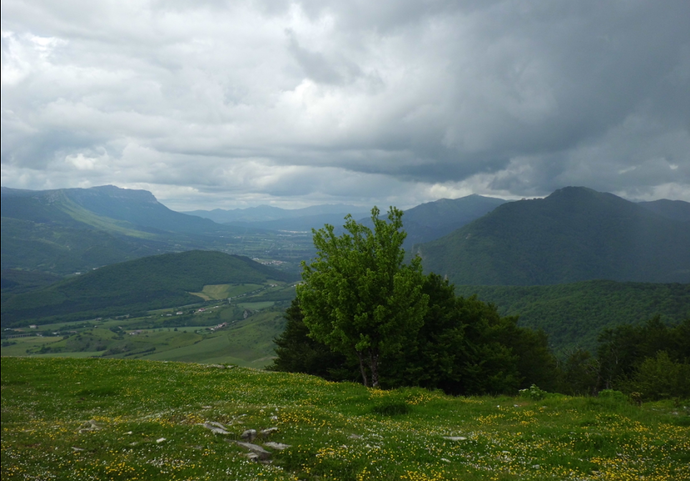 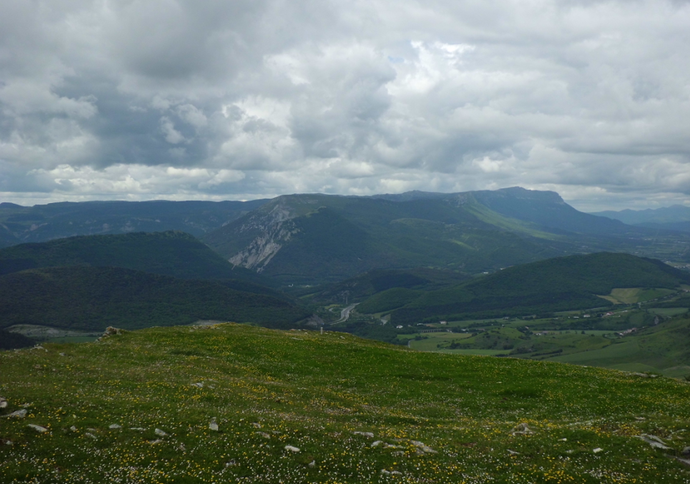 I found a group of bleech trees on the summit and I set up in a way that I could sat down below the trees because of the rain. I must admit that I finally didn’t need the fishing pole ring

as I found a firmly stuck on ground vertical stone in this ruined construction in progress of being restored but looking on stand by for quite a long time now. 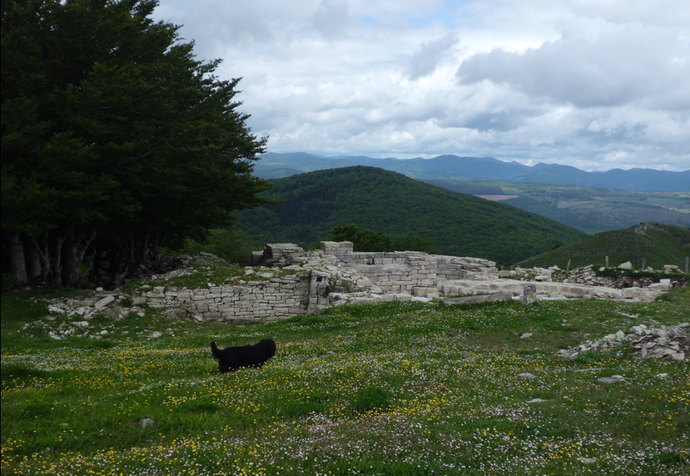 Much more comfortable sitting this time, I started the activation on 20m SSB. When there were no more callers, I QSYed to 30m (CW). I would have liked to work on 17m but I saw the time and I understood that it was time for me to QRT and descend if I wanted to be home in time for lunch with my family.
This is the log: 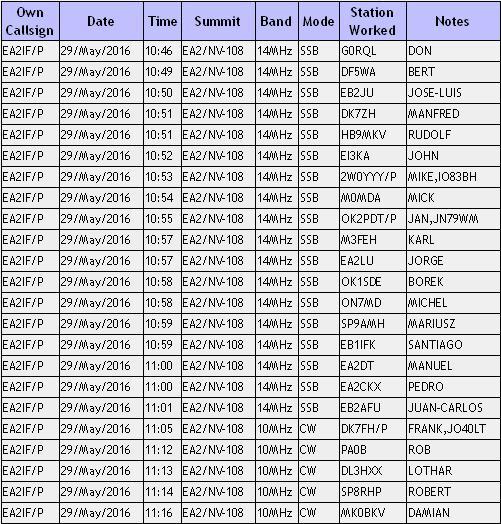 I was called by Mikey for S2S from a Welsh summit, which was a very nice surprise and also by Jan OK2PDT, who was still operating from the same summit he had called me from during my first activation.
After 20m SSB, I QSYed to 30m CW and the first thing I heard on 10.118 was a CQ SOTA, so I immediately called him. It was Frank DK7FH and we were delighted with our S2S QSO.
This is the S2S Log:

After the hike to Mt San Cristobal on Saturday and these 2 hikes on Sunday, I had my legs needing a rest and so they were our dog Lucho’s. See how he was working on it at our home garden in the afternoon: 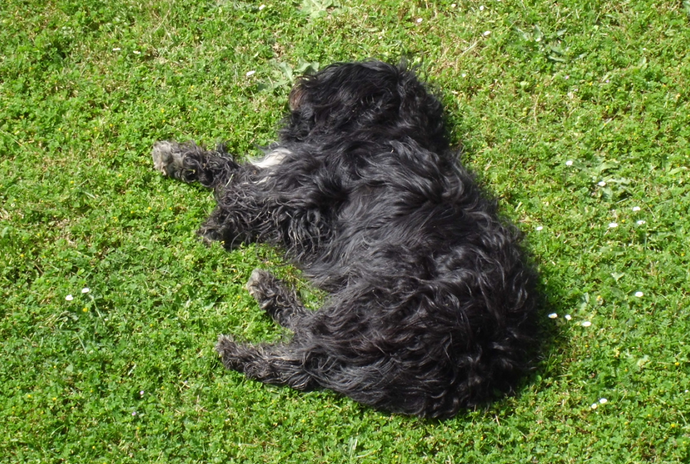 Thanks again dear chasers for being there and giving me so much fun, pleasure and good company.

thanks for sharing.Glad you were able to face these angry goats: it seems they’re jealous about their summit.
The pictures are beautiful; we are SO lucky to have all these nices summits at hand…
Take care and look forward to your next walk.