Today it was cold (3° C) and foggy when I left home heading to Pamplona.
After crossing the tunnel of Sierra del Perdón I found the fog a bit higher in Pamplona’s valley and I could see that the summit of Mt San Cristobal was inside the fog.

I did the ascent in 35 minutes, as usual, and the summit was inmerse in the fog, as expected, so I didn’t have any views nor took any pictures.

I did the ascent with a long sleeve T-shirt and a short sleeve T-shirt on top of the former. As soon as I got to the summit and stopped, I felt cold due to the fog, the low temperature and the wind, so I immediately put warmer clothing on, a jacket and a windstopper along with a scarf and a whool hat.

I quickly set up and called on 145.525 FM when I was about to switch on my FT-817 on 20m.
Santi EA2BSB replied and he offered to raise a spot for me as soon as I would confirm that 14.062 was clear. But it wasn’t, I found an activator there and another one on 14.061.
I called both of them and we completed our S2S QSOs.
Then I told Santi that I would start CQing on 14.059 and in that very moment Manuel EA2DT called me on 2m FM. We made a very quick QSO because I feared that someone would start using the 14.059 frequency that I had found clear and Santi had raised a spot for me on.

I had several chasers calling and I logged 14 QSOs in 15 minutes, one of which was a DX with Bob AC1Z. Also a S2S with Marcial EA2WX form EA2/BI-055. Thank you!
With no more callers, I was almost having time to QRT but I decided to give the SSB chasers a chance instead. 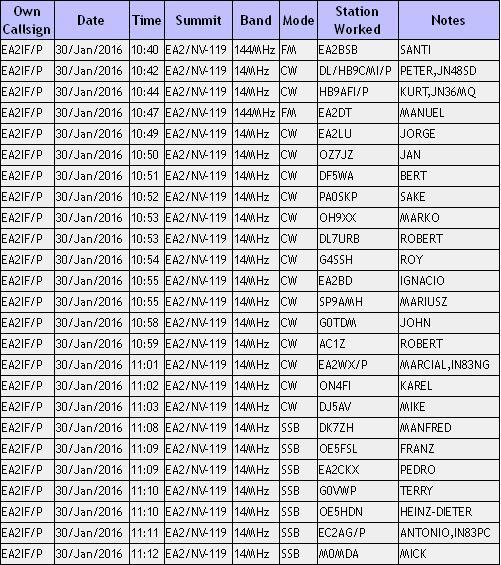 And these are the S2S QSOs:

I packed up, took my warm clothing off and descended almost running, as fast as the steep muddy slopes and the stony track allowed me, because I wanted to be in time to pick up my daughters at the rock climbing training place.

It’s been my 41st activation of this summit and I’m still enjoying it a lot.
Thank you very much for your calls, support and company.
Best 73 de Guru