I went with my family to Lekeitio for New Year’s party in the beautiful Spanish Basque coast, as we did last year.
After 2016 farewell we immediately gave proper welcome to the new year 2017, but it wasn’t a too long welcome because I wanted to get up early in the morning to go out and activate some SOTA, the first activation of the new year.
I was in bed by about 2 AM with the alarm set for 7h45 AM, so I had less than 6 hours to sleep. My wife had asked me not to arrive too late for New Year’s lunch, as it happened to me last year, so I decided to activate the closest summit and try to cover most of the hike by car. 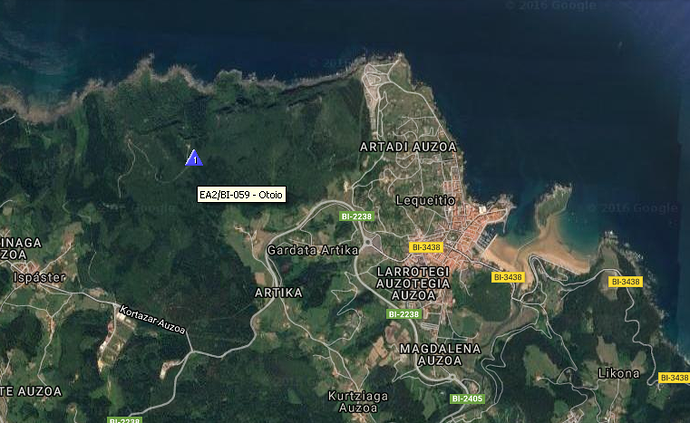 I exited Lekeitio with a cold temperature of zero degrees C through the road BI-2238 and then took the BI-3238 to Ispaster.
Right at the following GPS point (N43.36-W2.537) I took and followed the mountain dirt road towards the summit as indicated by the red arrows in the following picture.
The mountain road drive required permanent 4x4 with shorter gears set and it was quite a challenging off-road driving at certain points. I parked not far from the summit: 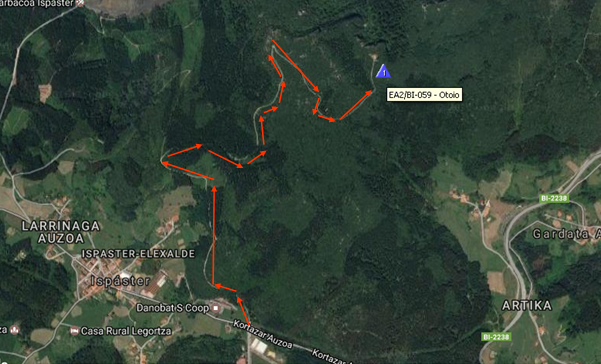 The red circle shows where I parked the car and the green arrows show the short hike I did to the summit. 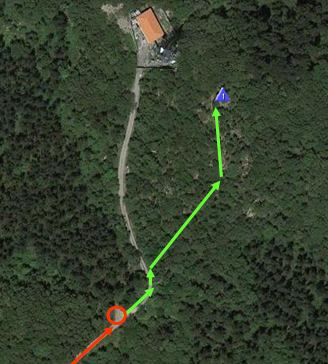 The summit is inside the forest so I remained in the shade all time during the operation. Very cold…
I attached the 7m long telescopic pole to the trig point cylinder and put the endfed wire towards the NorthEast. 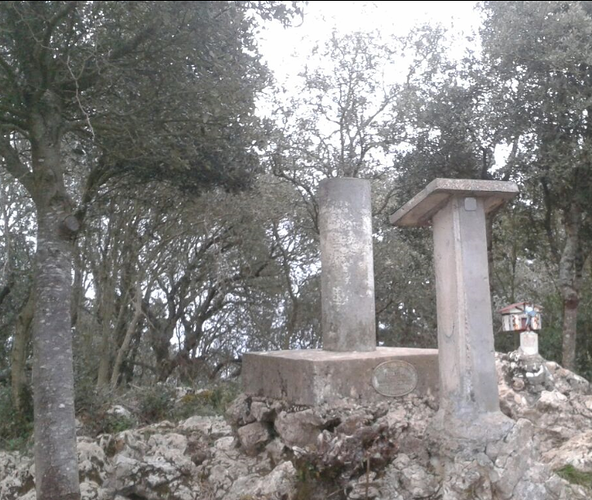 I had to do an improvised repair when I found fully dettached the connector of the antenna wire to the current transformer box after having got it hooked in the bushes during set-up. Fortunately I always have this little Swiss friend with me in the rucksack and it helped me to peel off the end of the wire and get it properly connected to the socket in the current transformer box.
It’s important to have some simple light tool in the rucksack in order to overcome little unexpected problems.

I selfspotted through the app SPOTmySOTA, but I have now realised that, for some unknows reason, none of those selfspots produced a spot on SOTAWATCH. I understand now why I was asked so many times about the SOTA reference during the whole operation. Of course it’s better asking and I was always more than pleased to send the reference.
I started on 40m CW with not very good results, but I must say that I had the impression that my FT-817 wasn’t putting much power out. I had noticed this problem before and I think it’s related to the very low temperatures, as the forward power indicator in my ATU was not moving at all in the beginning of the operation on 40m CW and it was moving correctly at the end of the operation also on 40m CW.
I wonder whether any of you have ever noticed such issue with the FT-817 not putting much power out when it’s extremely cold and starting to increase output power as it warms up during the operation. Any comments from you guys will be welcome.
After the 3 first QSOs on 40m, I was called by PA7RA with very good signal but he never came back to me after I gave him callsing confirmation and signal report. The same thing happened with OK1DRJ, he called me but he never came back with his report after I sent his callsign and signal report to him. Unfortunately I can’t put you in the log, as the QSO wasn’t completed.
After these 2 consecutive failed QSOs, I feared not being able to qualify the summit, so I QSYed to 30m, where things went notably better with 14 QSOs in the log.
When there were no more chasers on 30m, I QSYed to 20m SSB, where Ignacio EA2BD chased me first, he spotted me (thank you!) and then I could log 7 more QSOs.
By that time, I had been more than an hour in that cold summit and I was already feeling the effects in my body, with difficulties to hold the paper notebook in place and the pencil in my hand.
Notebook and pencil had already fallen down off my hand to the ground 2 or 3 times by then. I even had to ask for QRX once because, after one more notebook fall off, I lost the page where I was writing and it wasn’t possible for me to find it back while holding the microphone and pressing the PTT.
However, before QRT, I went back to 40m CW to give my friends in EA the chance to chase me.
Alfonso EA4CWN did chase me and he spotted me right away (thank you, mate!), which brought some few more chasers. After half a dozen QSOs in the log in this second run on 40m CW and a few unresponded CQ calls, I was feeling so very cold, that I went QRT, packed up and descended looking for the warmth. This is the full log: 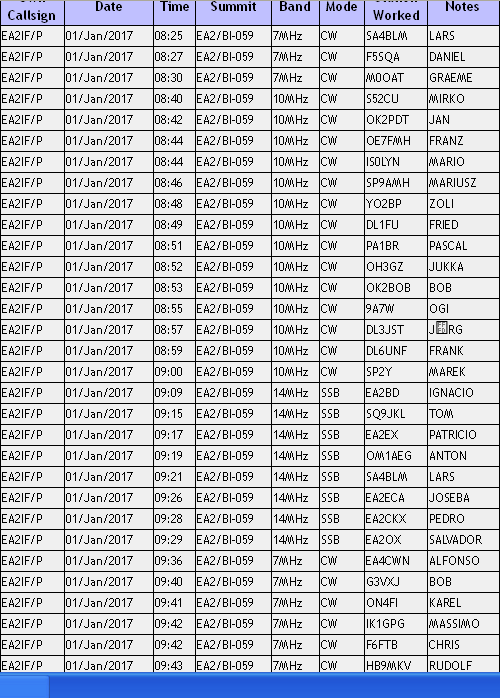 Once back in Lekeitio, I had a cup of coffee with a piece of sponge cake and later a small but delicious spanish ham sandwich like these: 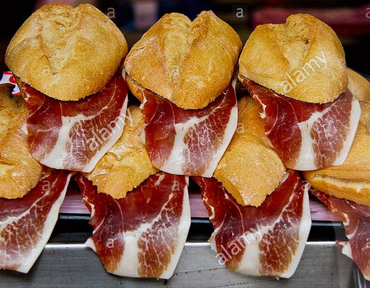 With my family and friends, we enjoyed some tapas and beer in the sunny bars by the sea, while I took some pictures. Let me share some of them with you: 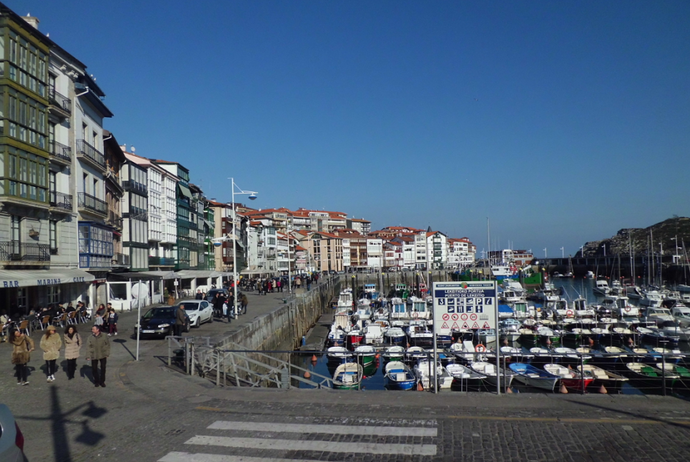 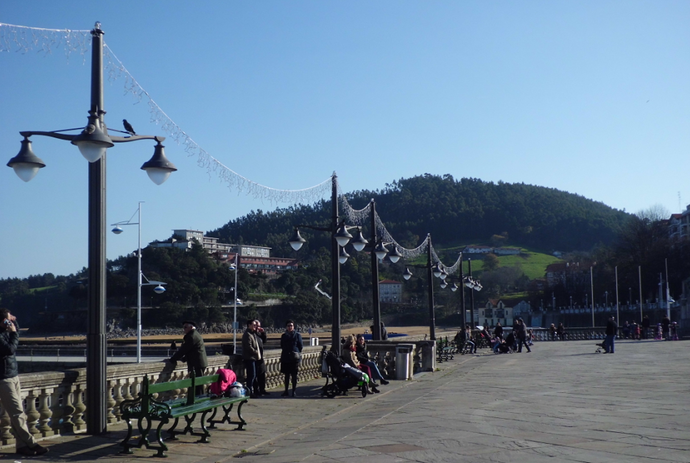 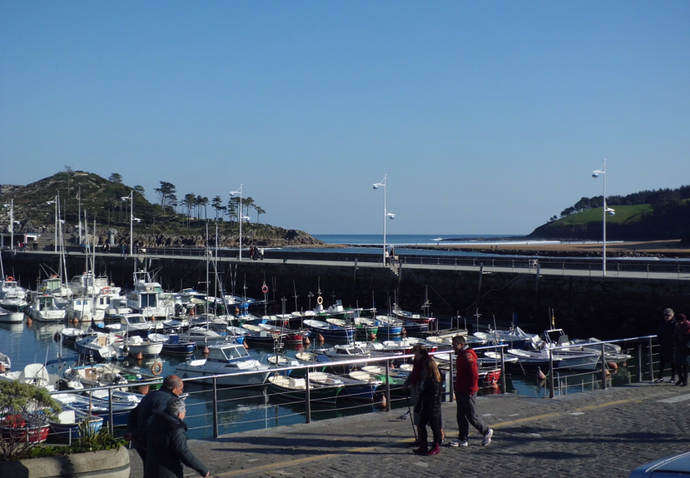 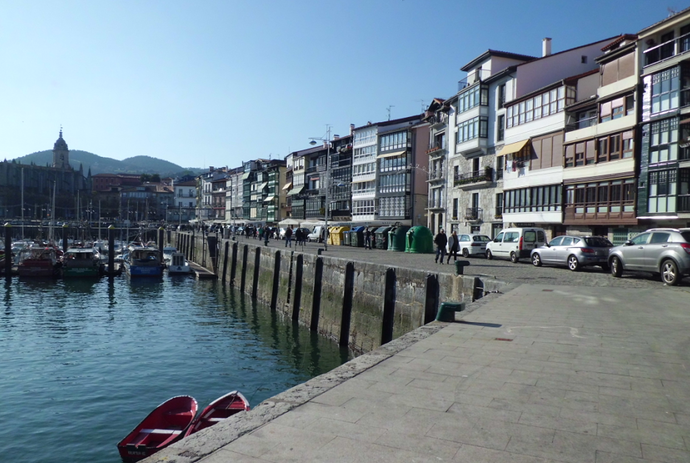 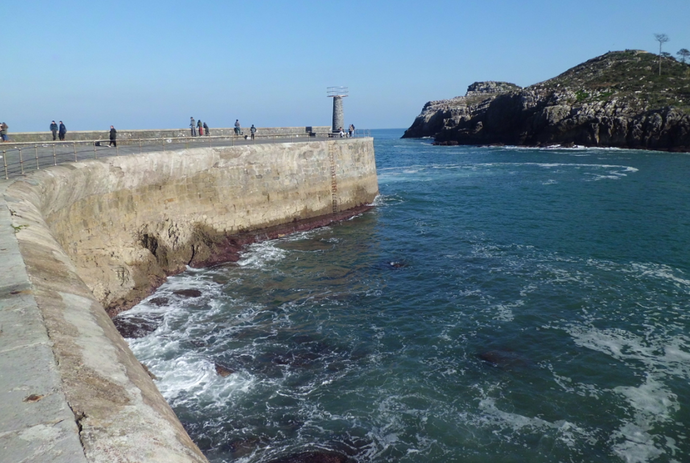 In this one you can see, behind the buildings, the top of the activated summit: 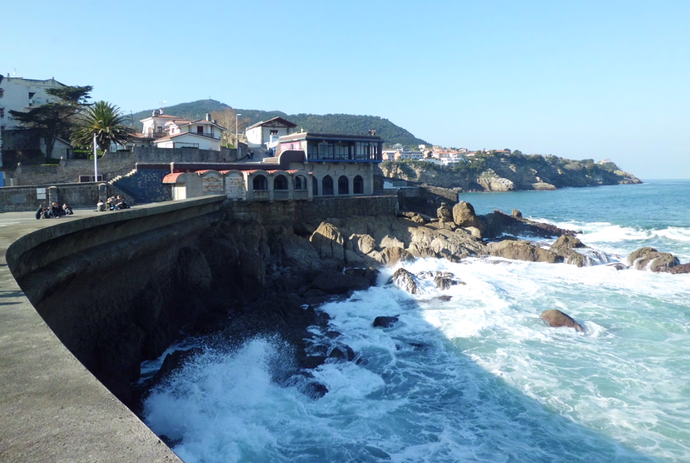 We drove back home in the evening and after such nice sunny day in Lekeitio, we found home still in the fog with a temperature of zero degrees

Well, I guess this is what it’s supposed to be like here in winter…

Thanks for all your calls and QSOs and sorry to those who couldn’t complete the QSO and didn’t make it to the log. I’m sure there will be other future chances.

My best wishes to all of you and your families for 2017.

Very interesting report, especialy about the importing tool like “swiss Knife” hi… Thanks, 73 and HNY to you and your family.
Peter, HB9CMI,
who will be again in España in June 2017… perhaps also for SOTA activations.

HNY and Thanks for the photos Guru that was my first SOTA chase from home. Heard you calling a few times so decided to give you a call, I was only using 10w with the KX3 to an EFHW antenna so was pleased that you returned my call.

I love the Basque coast!

Hi Graeme,
Wow, it’s nice for me to be your first SOTA chase ever!
Thank you very much for your call. You were putting a good signal with your 10w and EFHW antenna.
I hope we’ll meet again on the air either chasing or activating.
73,

Hi Peter,
I’m glad you liked the report.
The swiss knife was in fact a courtesy little gift from a machining tools supplier maaaaany years ago.
It’s been with me for decades and it’s still in perfect conditions.
Now it’s permamently in my rucksack as part of the SOTA kit.
I don’t use it much but whenever it serves like it did, making possible this activation, I feel very grateful to it and happy for having decided to include it in the SOTA kit quite long ago.
I hope to copy you soon on the air.
73,