(Editted to add a picture of myself in the summit).

We had some snow and lots of rain in Pamplona over the last days and this precipitation was mainly snow in the mountains around us. It wasn’t raining this morning so I fancied a good hike with the dog Lucho and an activation on snow.

The chosen target was this mountain, which I everyday see right in front of me before entering to work. This is how it looked like today from near the village of Anotz, which I crossed when I was driving the 25 Km from my QTH to the start point in the village of Azanza: 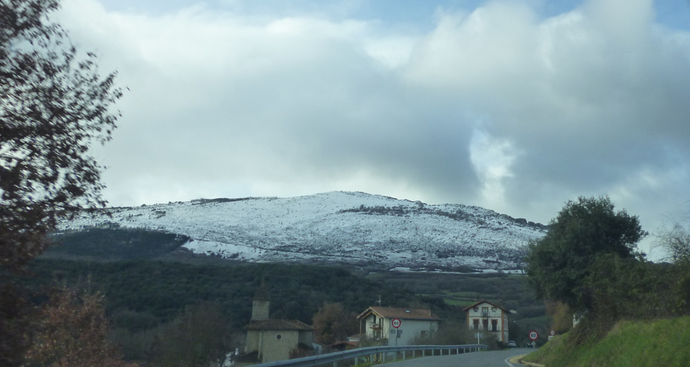 This map can give you an idea of its location to the West of Pamplona. 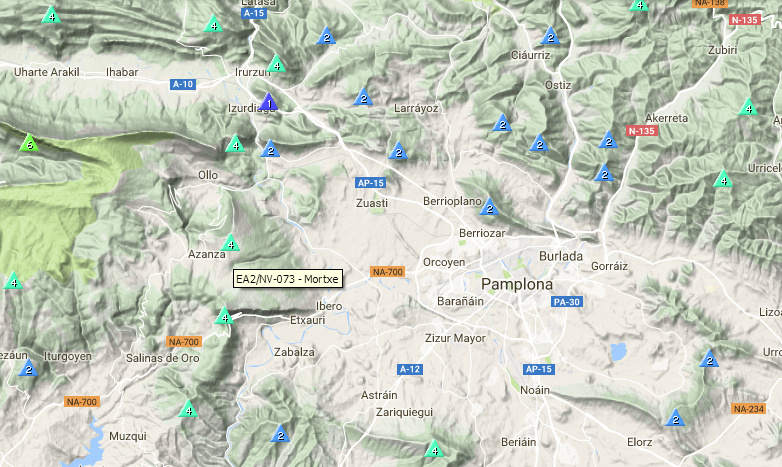 I had not activated this summit since March 2014 and it was already time for me to do it again.
The hike started with a walk on a concrete road covered with some snow. 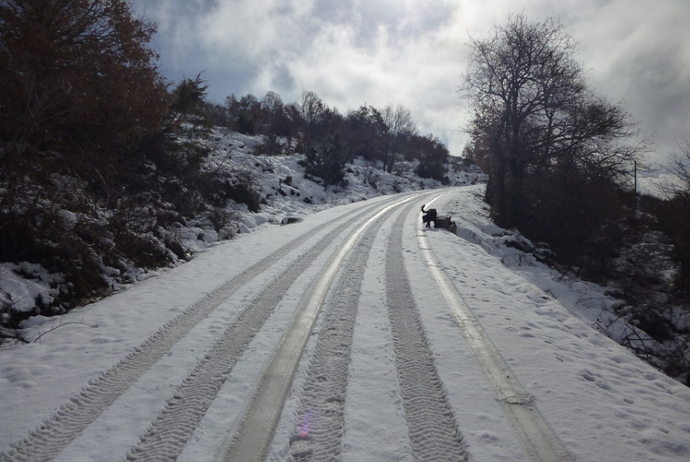 I kept progressing and the snow on the road got deeper: 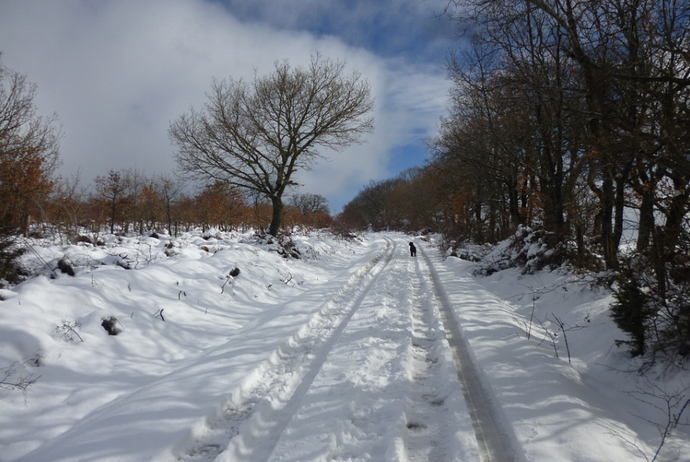 When I left the road and started to hike accross the field, the depth of the snow was nearly 15-20 cm. 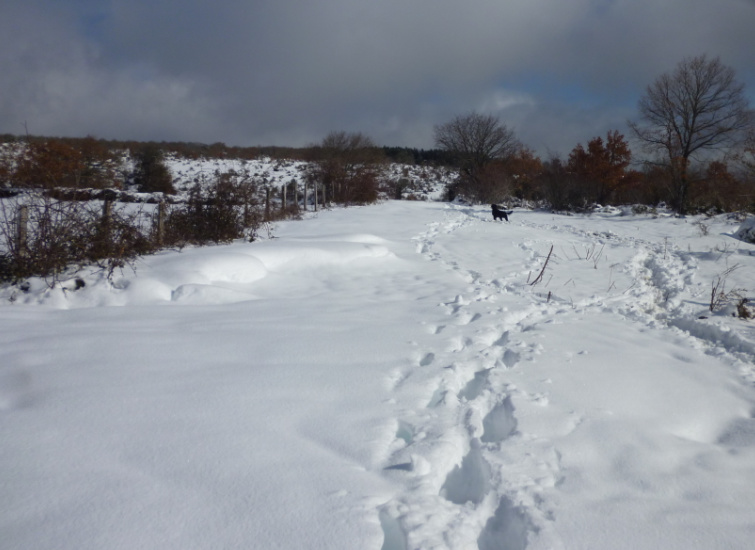 It was really nice hiking on fresh virgin snow. 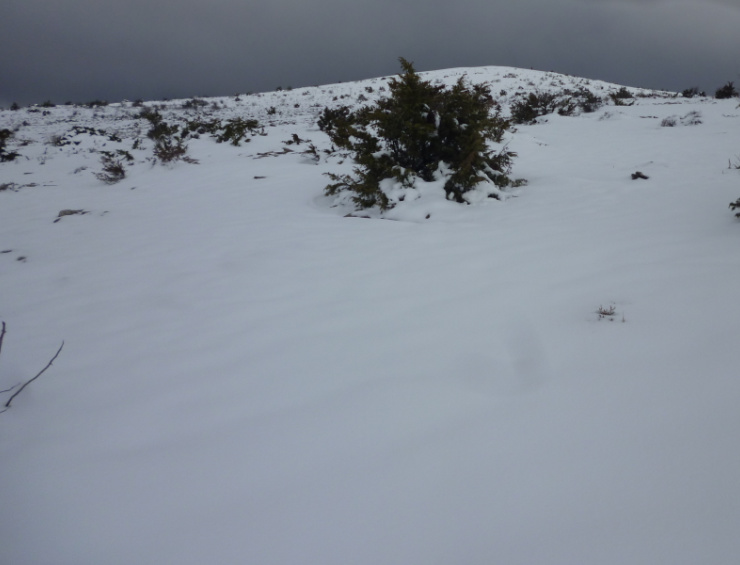 When hiking to reach that high point seen in the above picture, I found areas with snow depths up to 40cm. 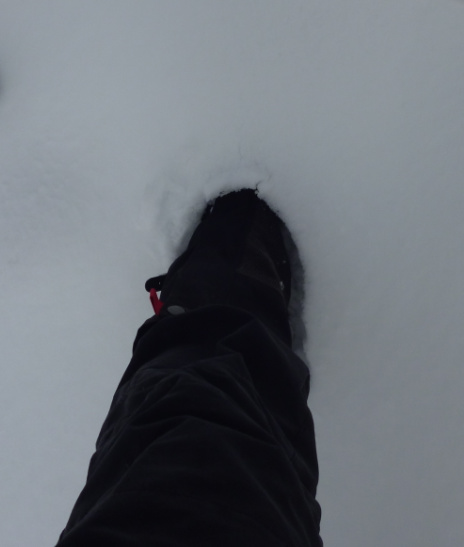 After reaching that high point, I spotted the trig point not too far away along the ridge. Some horses were there strugglying to find something to chew. 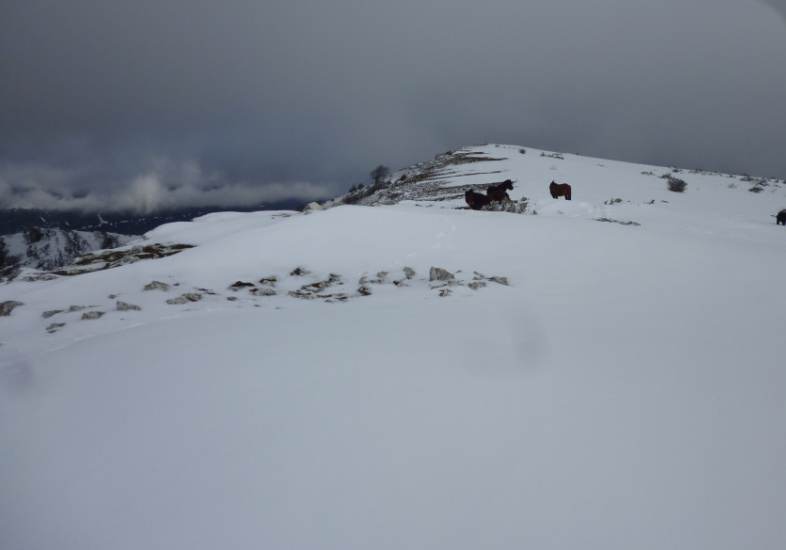 The views during that shork walk to the trig point were beautiful: 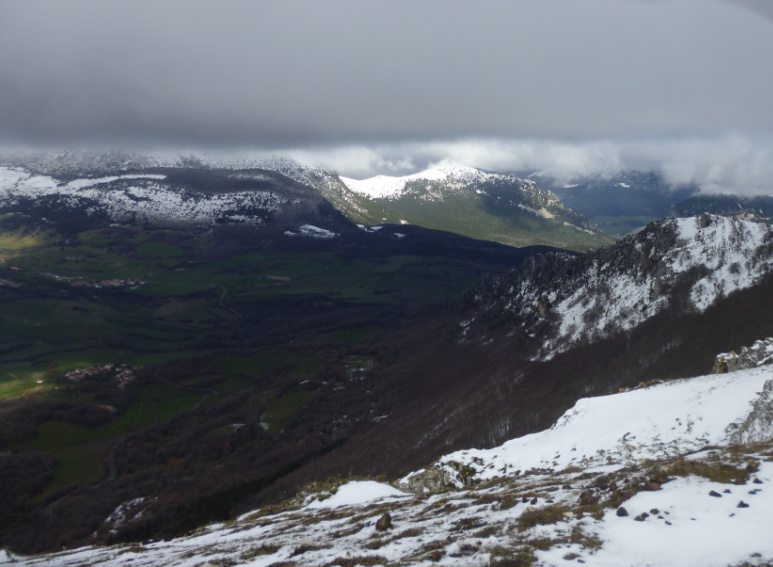 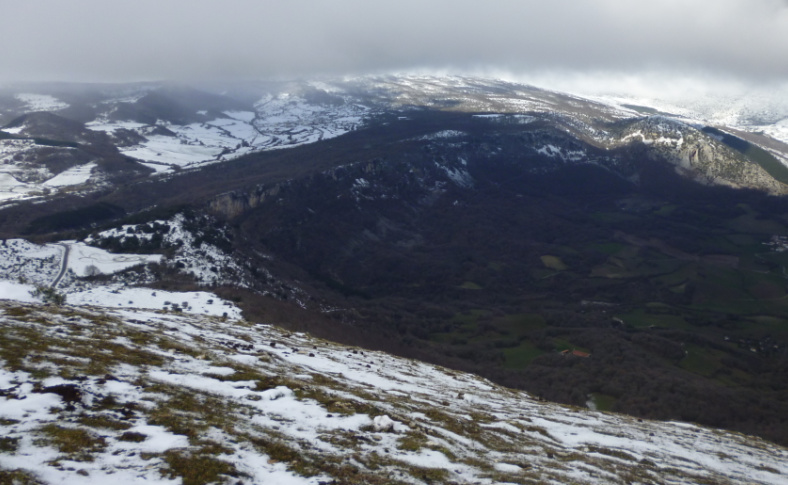 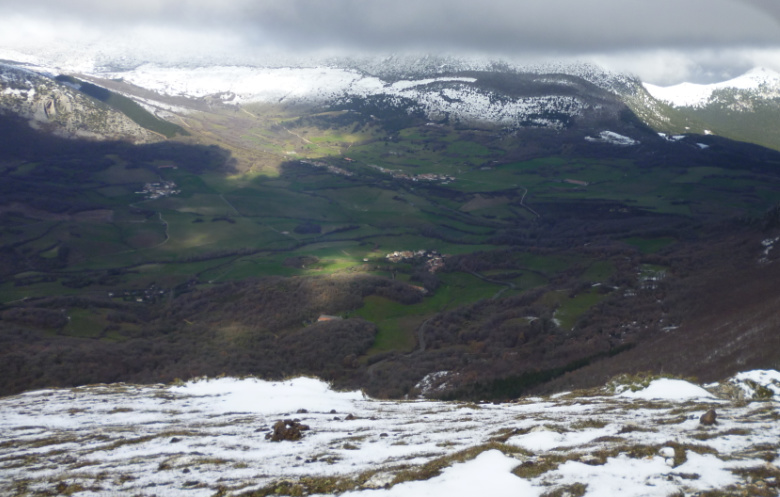 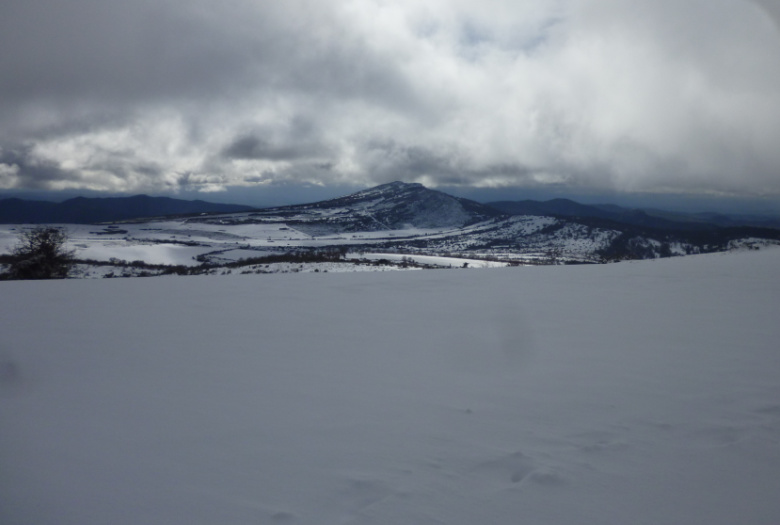 A look back during my walk along the ridge towards the trig point: 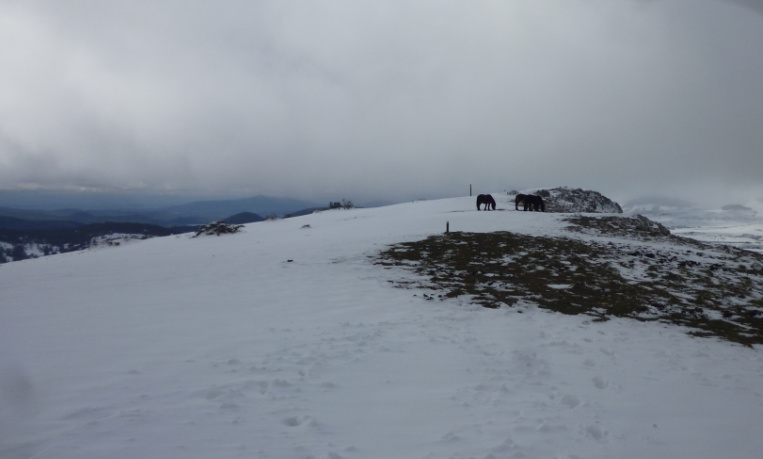 And the trig point was finally reached after 55 minutes hiking. 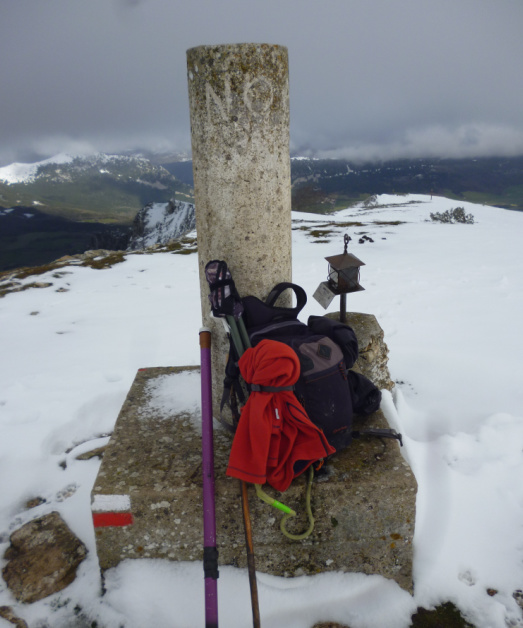 I usually hike up with little clothing and put everything on upon reaching the summit to avoid getting badly cold. This pic was taken after having put all my warm clothing on: 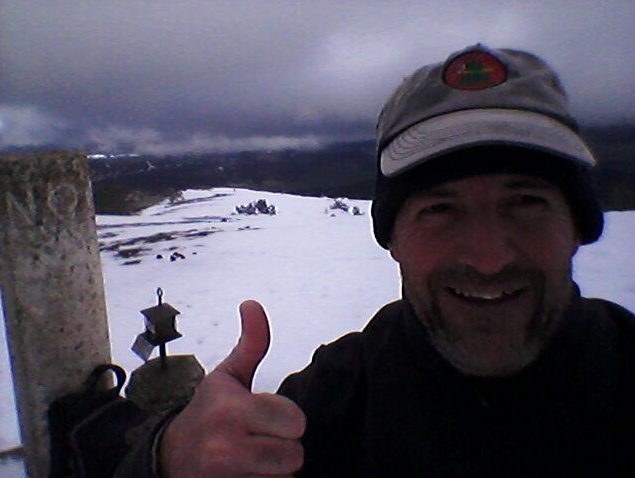 When setting up, I accidentally broke the 2nd top section of my telescopic fishing rod, so I had to use a shorter version. In order to compensate for the 2 top sections missing, I tied my walking stick to the trig point and then put the shorter fishing rod on top of the trig point cylinder tied to the walking stick. Unfortunately I forgot taking a picture of my set-up, but I already showed this set-up in other previous activation report, so you surely know it.

There was a not too strong but constant, cold wind in the summit, so I knew I would have to make it quick in order to activate all the alerted bands/modes before getting frozen.

I started on 30m and logged 11 QSOs in 9 minutes.
Then I QSYed to 40m CW where I logged 12 QSOs in 19 minutes. When nobody else responded to my CQ calls, I was already shivering and feeling like going away of that cold wind, but I decided to make an extra effort and give 20m CW a try.
It paid off because immediately after my first 1 or 2 CQ calls, I got called by Leslie K4DY, the first DX of the day. Marko OH9XX and Victor GI4ONL followed, to whom I informed of the very cold and wind I was having. Immediately after Victor, I got Bob N1GB, the second DX of the day. Then Alexei RW3XZ from Russia and 3 more regular chasers from S5, DL and OE. After the last contact with Heinz OE5EEP, I called QRZ? and CQ SOTA a couple or three times but I had no response, so I pleased switched off my rig and started to quickly pack up to leave the summit and get out of the wind.

During the activation I got some snow drizzles and it was so cold in the wind that I had difficulties to write on my paper log and also to operate the paddle.

I took these 2 pictures right before leaving the summit to show you how the WX situation had worsened: 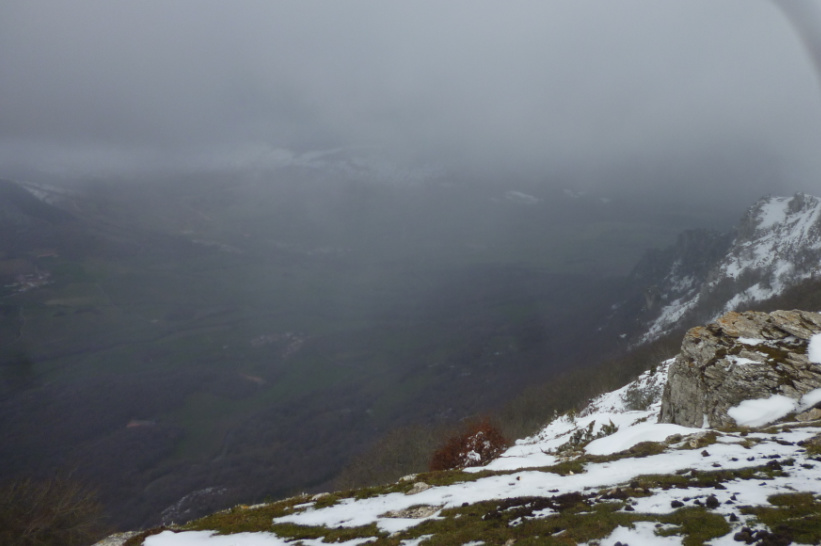 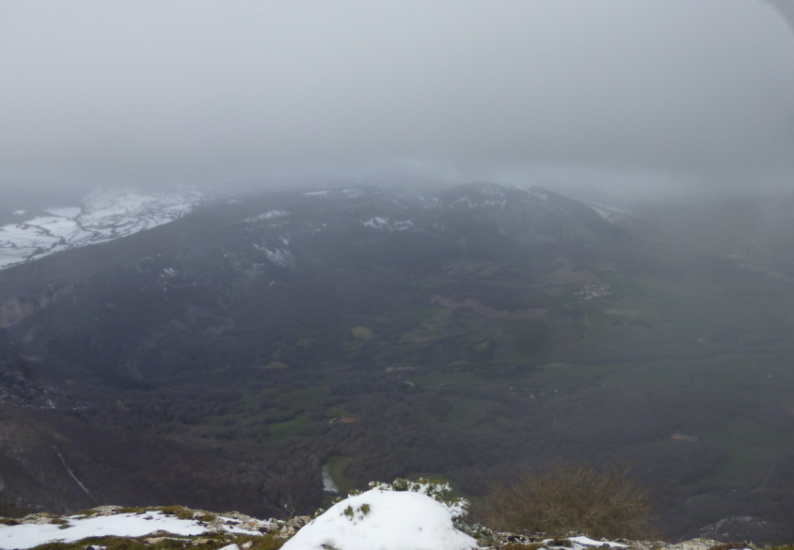 Now, I’m in the warmth of the QTH shack writing this report and I feel very happy for having made the effort of staying there putting this Summit On The Air for you and having enjoyed the hike on the snow. 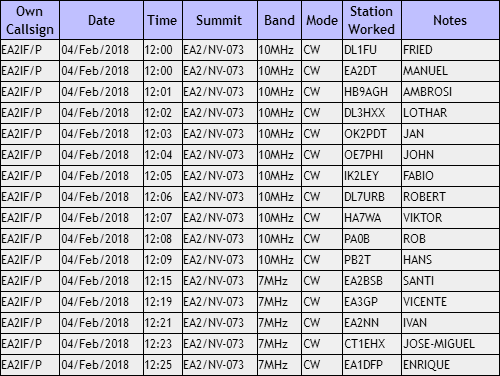 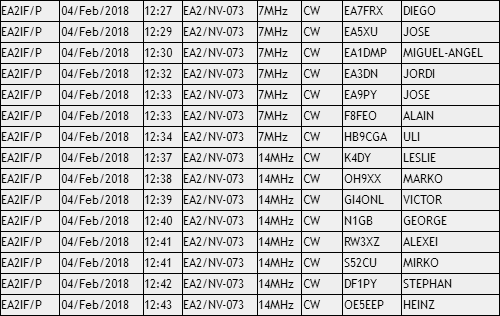 It’s hard to be in the cold windy summit but its worthwhile, as it’s a pleasure making SOTA QSOs with all of you dear chasers.
I look forward for many more to come.

When setting up, I accidentally broke the 2nd top section of my telescopic fishing rod, so I had to use a shorter version.

After a home made repair (another one) my SOTA fishing rod is ready for some more activations. After all the repairs it’s got in these nearly 10years of outdorrs operations with me, it’s current total length is 6,84m. I think I’ll be able to live with it.
Best 73,