Since May 2016 I am temporarily living in Valencia.
I couldn’t activate since long time ago, but the launch of the Minimalist HF event* gave me the opportunity to find a mountain near Valencia to participate.

I grabbed my newly acquired KX3, 3S LiPo battery and my new homebrew End Fed Half Wave multiband antenna. All this minimalist setup plus the pole, rope and a cheap PC headset weights about 1,7 kilo. Very comfortable for a summer activation!

Mediterranean vegetation differs a lot from the one at my hometown area but weather was fine an I enjoyed the wild pinetrees forest there.
I took a road next to the village of La Drova, going up the mountain and parked in a parking place. No cars allowed up the summit but authorized ones.
I then walked for about half an hour following the road up. A police car soon passed by and I was happy to have left the car in the right place ;o) 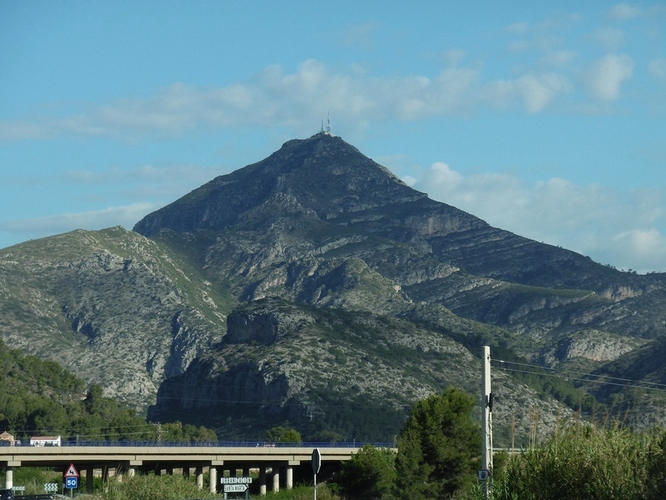 The summit is crowded with commercial relays and I feared about interference on HF but I finally didn’t have troubles to listen all right. In fact, when I installed everything and switched on the radio it was so silent that I thought I had something wrong in my antenna. 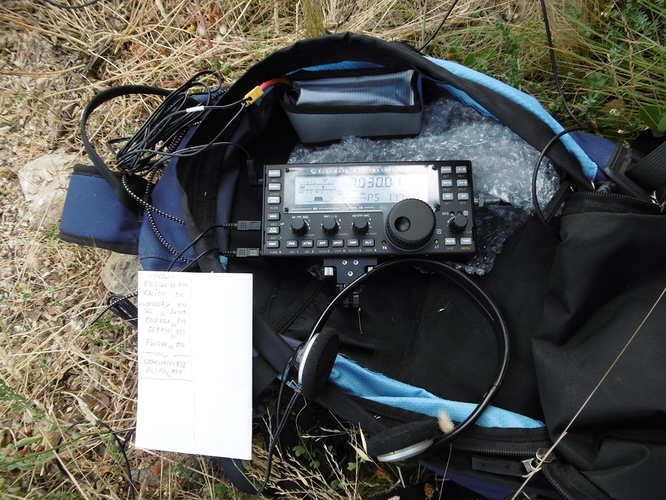 The KX3 in my rucksack. I settled to 4 watts output power. 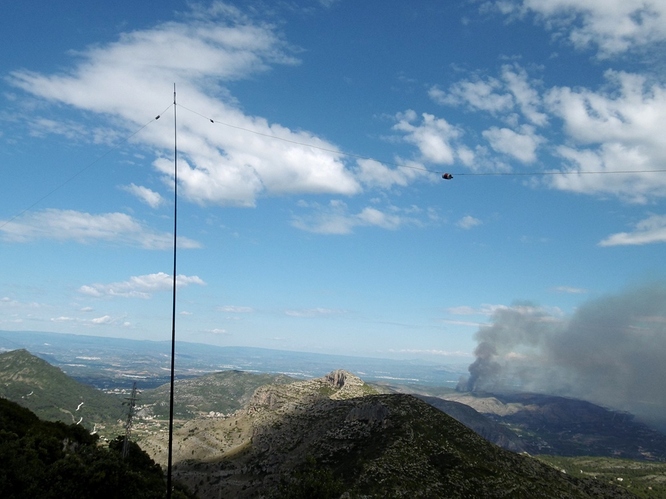 The EFHW. You can distinguish near the appex two LC traps for automatic band change (21 & 18 MHz) plus a switchable coil down the wire for 7 MHz. 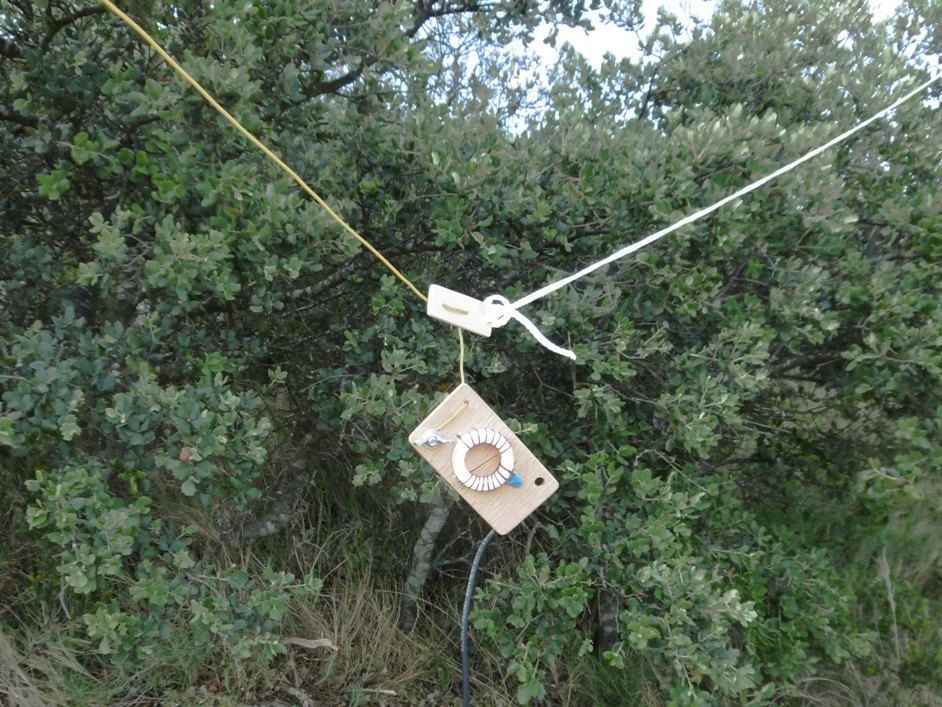 Detail on the Feeder, without any box to save some grams. It is made out of a FT114-43 plus a little 150 pF capacitor in parallel. Coax is RG-174 also to save weight.

I had brought my handheld and behore leaving the summits I had a short qso with 3 local ham from EA5.

Before leaving I took pictures of the view. In one hand the beauty of the Mediterranean Sea so close at sight… 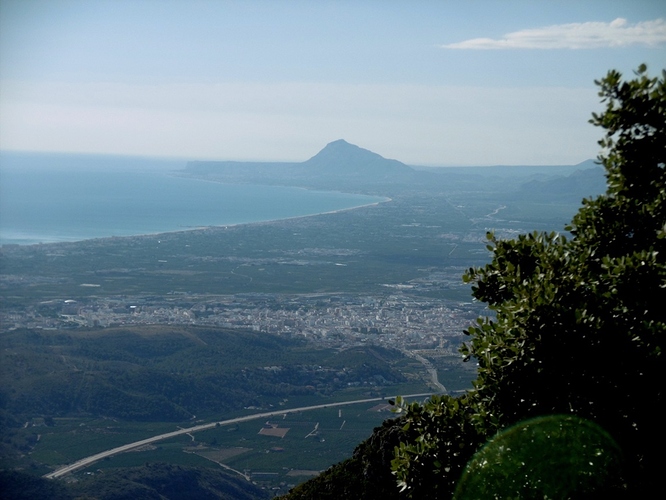 And in the other hand the fire in progress in a mountain towards North: 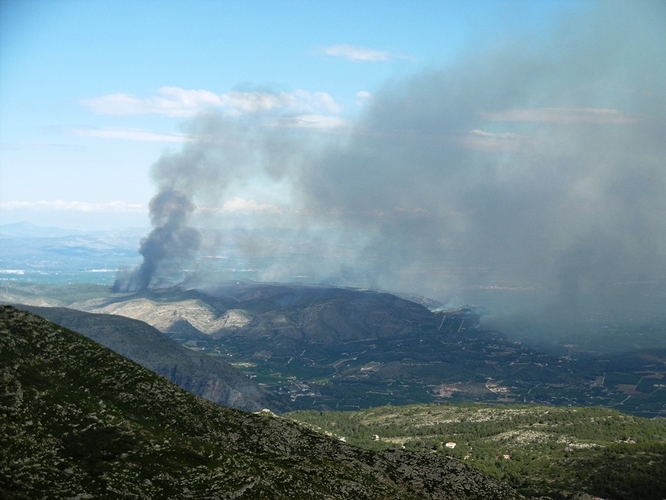 In Valencia there are nowadays 4 fires in progress, so sad! The bad news is they seem to have been deliberately ignited by pyromaniac! What can of joy do they gain ruining nature?

Thanks to all chasers and activators. Glad to have met again with old mates.
Hopefully I will try further activation in the area soon. 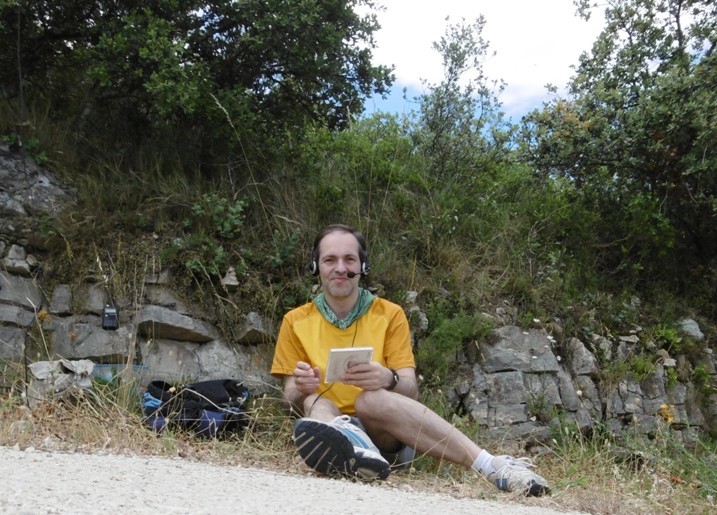 The happy activator enjoying the qso in progress…