It rained yesterday when I activated Mt San Cristobal, but the forecast for today was a mostly clear sky, so I decided to go out to activate a mountain called Mendurro, which I had never heard about before finding it on the SOTA summits list, despite it being near my birth town Pamplona.

I found a GPS track on Wikiloc and here you can see it’s location on the map with respect to the city of Pamplona. 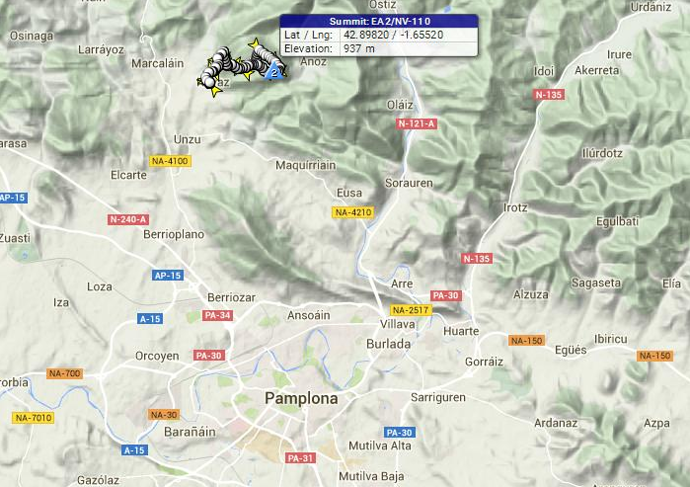 And this is a nice picture of the mountain that I found on Mendikat web page. 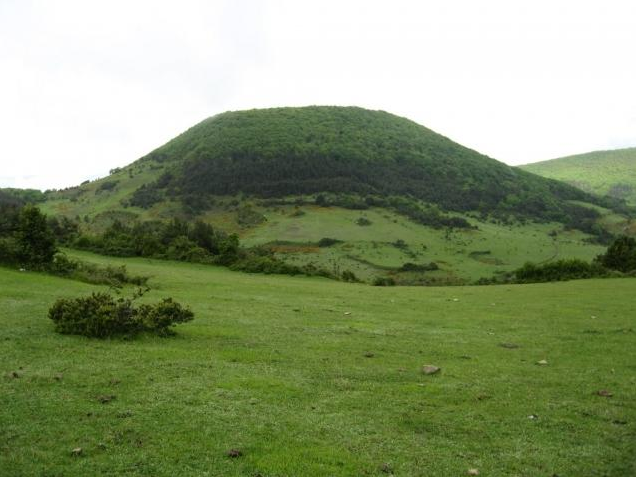 The GPS track that I got started at the little village of Navaz/Nabatz, where I parked the car and started hiking the track you’ll see in this following image:

When I started hiking it was 9h15 utc and the temperature was 5° C with a cloudy sky.
This is a picture taken soon after having started hiking: 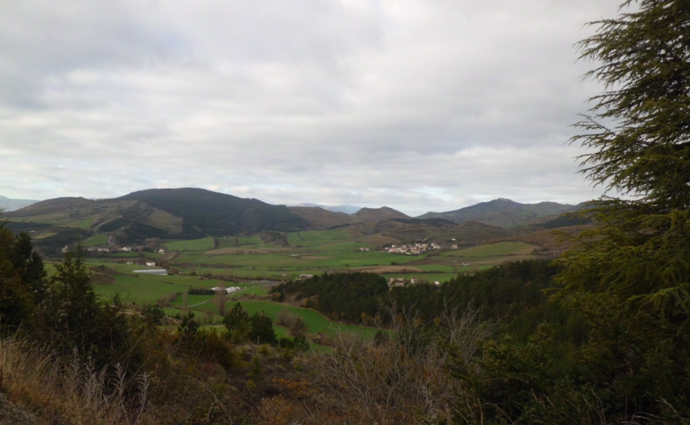 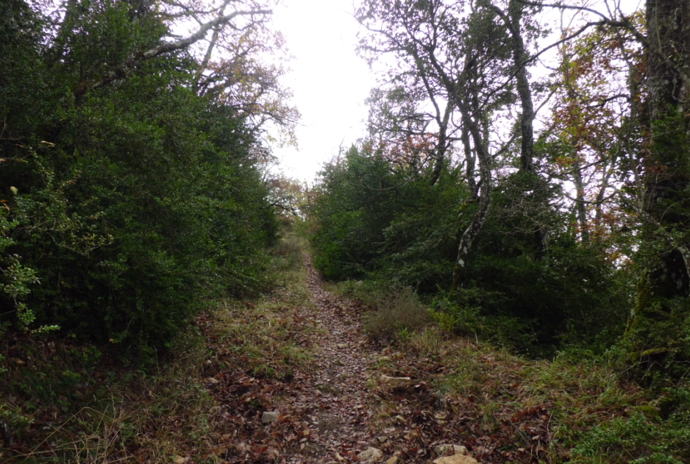 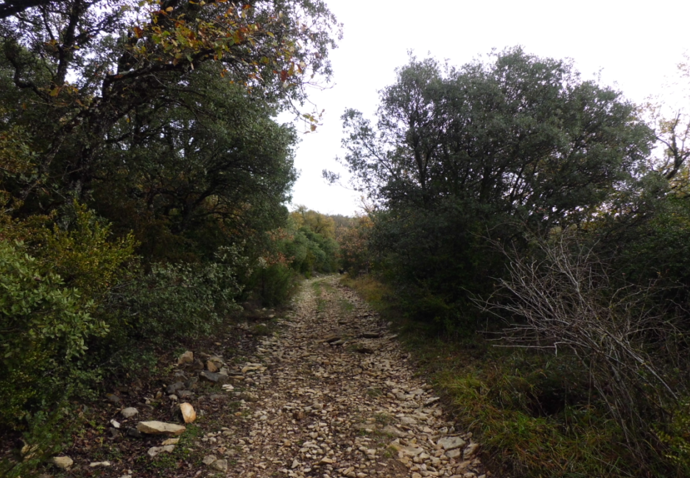 The ground was very, very muddy and the track was a bit slippery and difficult to hike on some specific sections like this one: 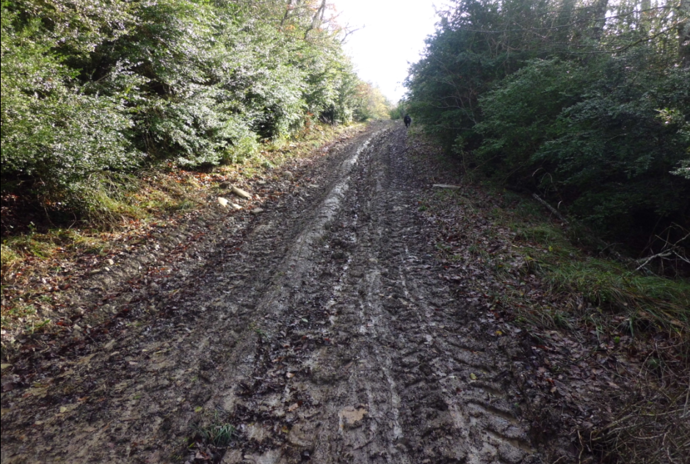 As I was approaching the summit, the clouds seemed to vanish and the sky was getting clear, as it was forecasted: 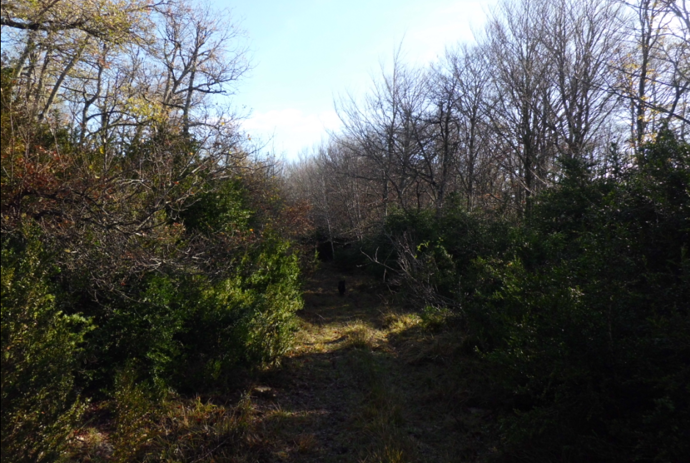 This is the point where the track splits and you can choose whether you want to approach the summit to the right or to the left. I took the right: 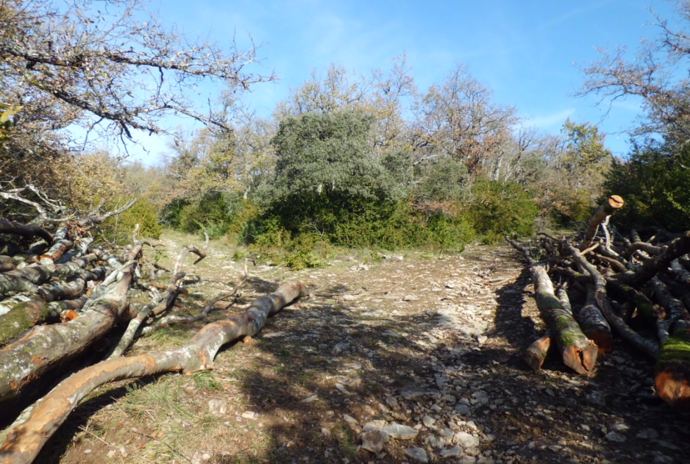 Pasted image938×631 1.21 MB
This picture was taken on my descent and that’s why the sun is much higher and more present.

I got to the summit by 10h45 utc and I started setting up. I also switched on my HH and found Alberto EA2DYS/P CQing while activating EA2/VI-003, so we had our S2S QSO while starting to set up my HF GP antenna.
When we signed off, I continued setting up and attaching my 7m telescopic fishing pole to one of the posts of a barbed wire fence running along the summit. The four wire radials I always have with this antenna were extended along the barbed wire of the fence in two sets of 2 wires each, one to the East and the other to the West.

I sat by the cairn with a wooden stick indicating the summit that you’ll see in the following picture and started CQing on 30m CW, where I got a run of 14 QSOs in 15 minutes. The last caller was SP9AMH and I got back to him twice giving him a 559 signal report, but, unfortunately, due to QSB (I guess), he never came back to me, so NIL.

Then I switched to 20m SSB looking for S2S with some of the other EA2 activators present in the band at that time.

Here you can see me while operating 20m SSB: 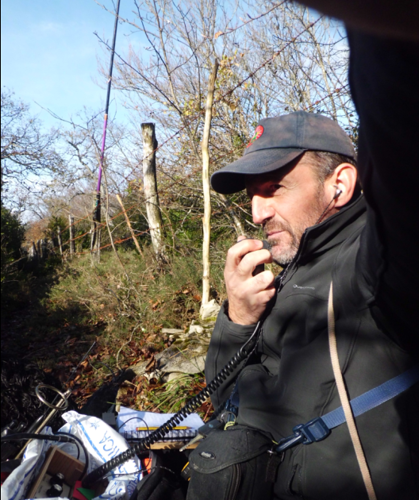 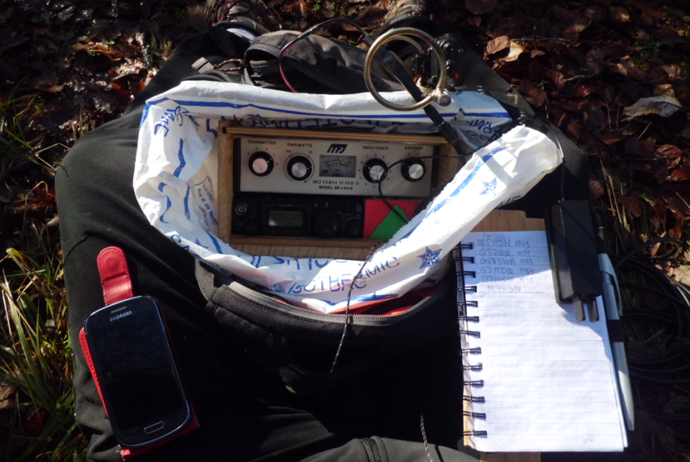 When I QSYed to 10m CW, 2 stations managed to chase me.

Finally I went to 28.450 SSB and started CQing. One Radio Club station from Russia seemed to work me but a bit later the QSB made audible for me the signal of an EA4 station calling CQ on my very same frequency. I heard some other stations calling him and making QSO with him, so now I fear that the Russian radio club station might have not worked me but the EA4 station instead, who surely was much stronger than me. I will keep the Russian station in the log just in case.

A few minutes after 12h30 utc I went QRT packed up and started my descent with special care in order to avoid falling down on the slippery muddier sections. Everything went fine and I finally didn’t have any falls.

The summit was in the middle of the forest so no views at all from there, however I enjoyed some beautiful views with a 13°C temperature under the warmth of the afternoon sunshine on my descent: 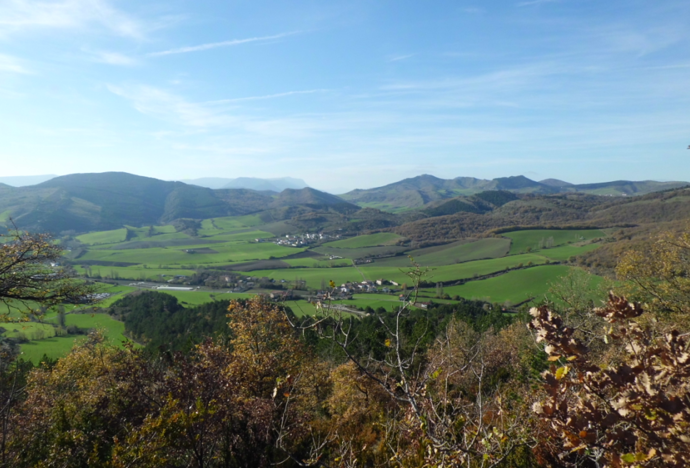 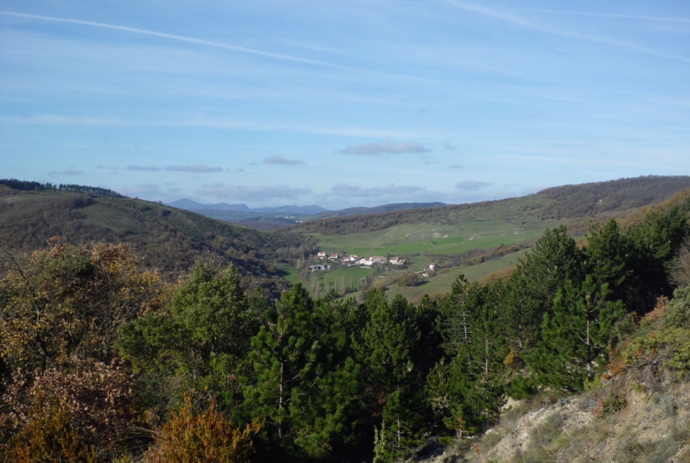 It was again a very pleasant day out in the mountain with an amazingly nice weather for a November 29th.

Not many, many QSOs in the log, but today’s contacts were extremely nice and I’m very grateful to you all for your nice words and company. 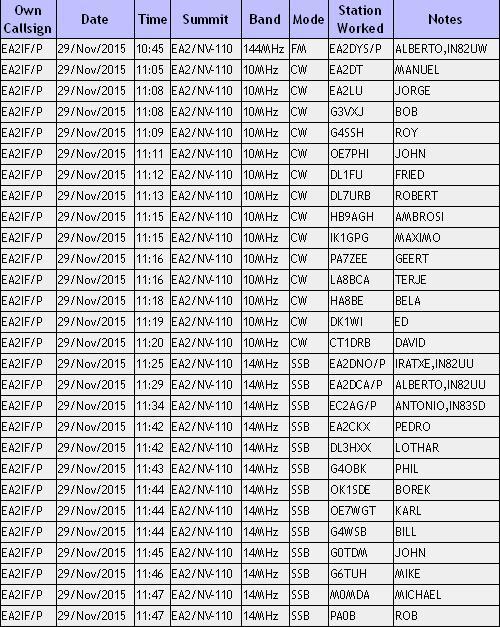 I’ll be looking forward to hearing you all again soon.

Have a nice week and best 73 de Guru

Are you sure that is Spain Guru? I ask because apart from the blue sky in the latter pictures, the first set look so much like the hills in this part of Scotland!

Hi Andy,
I think we are sometimes prisioners of the stereotypes and I know the stereotyped idea of Spain is that of the sunshine, the beaches, the heat, flamenco dancing, bulls and so on, but as you might guess, there’s much more than that in Spain.
The Northern Coast of Spain, being in front of the so called Cantabric Sea (in fact it’s the Atlantic Ocean), receives a lot of humidity in the form of rain and even snow. There are important mountain ranges like Picos de Europa and the Pyrenees, but there are many other mountains in Galicia, Leon, the Basque Country, Navarra. These montains contribute to slow down or even stop some of the clouds and rain coming in from the Atlantic Ocean and that’s why all the North of Spain is so beautiful and green.
This is also the reason why the tourist, during the 70’s and the boom of the tourist industry in the Spanish Mediterranean coast, almost never wanted to visit other areas of Spain. They only wanted Sun and beach with a good warm sunny weather guaranteed for the whole duration of their stay.
That’s something you may or not have if you go on vacation to the North of Spain. You’ll be able to enjoy many other things but the sun and the warm temperatures are not so 100% sure as in the mediterranean Costa de Sol, Balearic, Canaries, etc.
Best 73 de Guru

almost never wanted to visit other areas of Spain

What made me a little sad when I was in Lanzarote the other week was the fact there were many bars/cafes offering English food and English Pubs showing UK TV and football. I don’t understand why anyone would go all that way for they have at home. OK it’s warm and sunny but when I travel I want to eat local food/drink local beers. I live in the UK, I want something else when abroad! We had some amazing fish dishes and the most sublime baked aubergine with Canary Island Palm Honey (miel de palma).

This is something I like about SOTA, it has shown me there is so much more than I thought to many countries. I never realised there were such mountains and snow in Australia… again you just think of beaches, the outback, tropical forests up Darwin way and huge areas of desert in VK6.

You’re never to old to learn!

What made me a little sad when I was in Lanzarote the other week was the fact there were many bars/cafes offering English food and English Pubs showing UK TV and football. I don’t understand why anyone would go all that way for they have at home. OK it’s warm and sunny but when I travel I want to eat local food/drink local beers. I live in the UK, I want something else when abroad! We had some amazing fish dishes and the most sublime baked aubergine with Canary Island Palm Honey (miel de palma).

Hear Hear Andy, I don’t understand why a lot of the Spanish tourist places are commercialised with English pubs/bars/cafes as this is what to would get back at home. When I go on foreign holidays I also prefer to go to places that serve local food/beer rather than the food/beer you have have back at home.

I don’t understand why anyone would go all that way for they have at home.

Neither do I. This is something I have always amazed with.
I visited the isle of Mallorca with my wife before having the children (about 15 years ago) and we got very disappointed with a lot of what we found there.
Being in the Western coast of the isle made us feel like we were in Germany. The bars, stores and everything was managed by German speaking people and we were having to buy things or ask for services in English (we don’t speak German).
Being in the North of the isle was again the same story but British.
My wife and I were commenting exactlywhat you are writing here now: why these people want to come here and have exactly the same they have at home except forthe weather. They are loosing the main part of the interesting side of traveling and visiting a foreign country.
I think the most interesting areas in the isle of Mallorca are inland, away of the highly touristic coasts.
Now a days I enjoy much more visiting little villages and natural places rather than man made super attraction parks, very turistic crowded places or big cities.
I think I have developped some sort of crowd-phobia…

If you feel like coming over some time, let me know and I’ll be able to help you find and book some very affordable B&B or Rural Houses here, from which you’ll be able to hang around and enjoy an unbelievable number of fantastic SOTA mountains, the nice little villages, little rivers, woods and valleys in this area.

when I travel I want to eat local food/drink

While this is getting a bit off topic, it is a sad situation that so many British tourists head for the nearest “Brit” establishment when good local food is available elsewhere. But that is not always the case,

I have to admit to retreating to the Hard Rock Cafe in Guangzhou after several days of local Chinese food where the ground floor was where we chose those unsuspecting animals. The dishes had no relation at all to anything we know as Chinese food in the “Western world” which is essentially as Hong Kong.

If you are up to it, go there and try the “Spiced Duck’s Tongue”, “Double boiled snakes head” or the “Braised Fish Head with vegetables” but I am sure you too would retreat to some familiar food.
Jim G0CQK

Hi Jim,
You are very right on this. I remember being out in foreign countries were I was begging for an italian restaurant in order to find some pasta, scalope milanesa and some familiar stuff to be able to enjoy eating for a change.

Regarding Chineese food, I remember one day in the area of Detroit when a chineese couple friends of mine took me to what it was for them the best chineese restaurant in the area. Everything they offered there was so amazingly weird an even visually discussting to me that I was embarrasingly unable to eat anything, while my friends, the chineese couple, enjoyed their favorite food.

No signals here on 30 meters. Normally I can copy your vy good. What happened ?

Hi dear Tonnie,
I can’t tell you why you didn’t copy me.
Usually I start earlier on 30m and being later this time may have had an influence on the propagation conditions.
I had the feel that conditions on 30m were not too good at all, but there was the CQ WW CW contest so I thought many chasers may be busy with contesting.
Other EA chasers reported the same to me and were unable to copy me.
Perhaps my setup wasn’t working too well that day. I don’t know…
I’m sorry for not been copiable by you and others who looked for me and couldn’t copy me.
Hopefully next time will be better.
Best 73 de Guru.