After having celebrated with my wife Raquel our 15th wedding anniversary this week, I got a green card from her to go out in the mountains on Sunday without a need to be back home for lunch time, so I identified a couple of 4 pointers pretty close to each other, which I may be able to activate in the day. 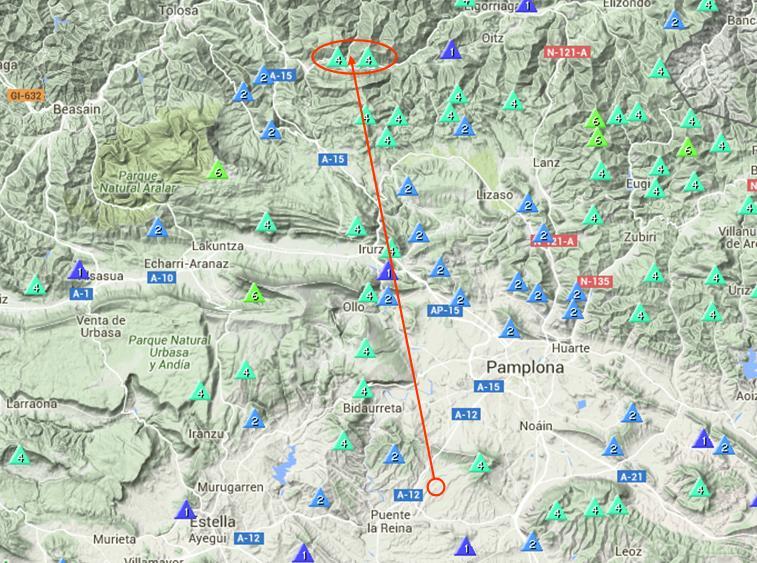 I had to drive my 2nd daughter to Pamplona by 8h AM utc (10h AM local) for a leisure activity with the college mates and monitors after which I headed to the targetted area.
These 2 summit are close to each other but there is a deep valley with very steep slopes in between, so I decided to do one first, get back to the car, drive to approach the other summit and do the 2nd hike. 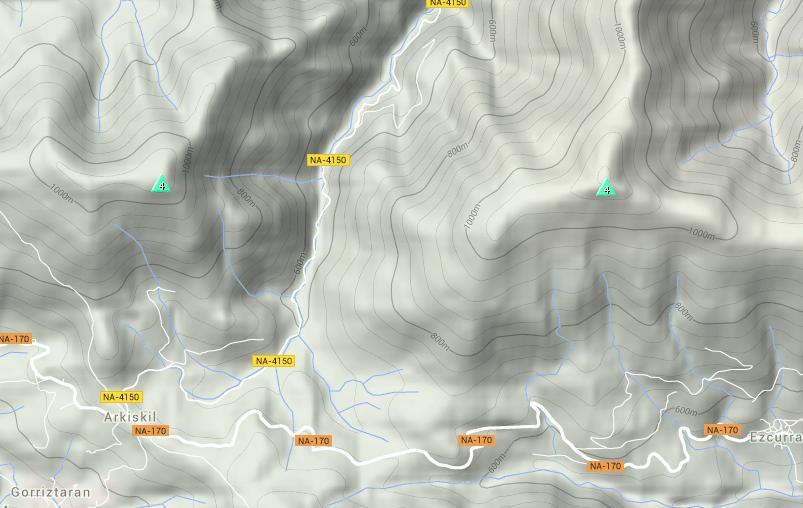 Here you’ll see the GPS track I followed. In fact, I was lucky because the mountain dirt road was open and I managed to drive the first part with my AWD vehicle. I parked the car and started the hike at the point marked by the black arrow on the map below.

The hike starts very, very steep. Here I stopped to take a picture of the beautiful views… and also to give my legs a rest after the steep start

You can see my car down parked at the side of the dirt road. The bigger village seen at the right hand side is Leitza. 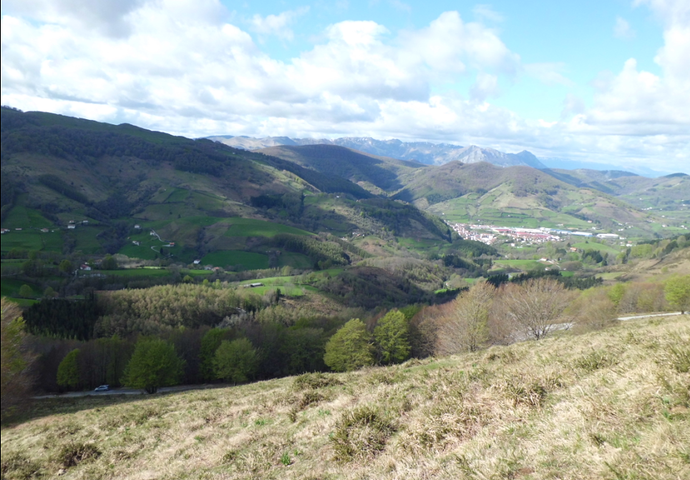 These are some more pictures I took during the ascent. 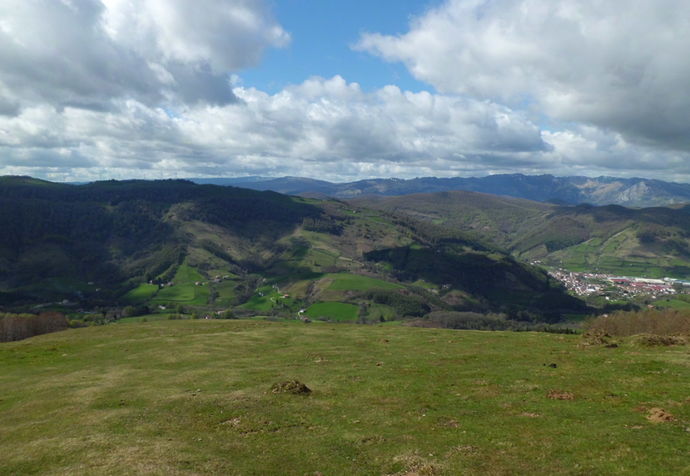 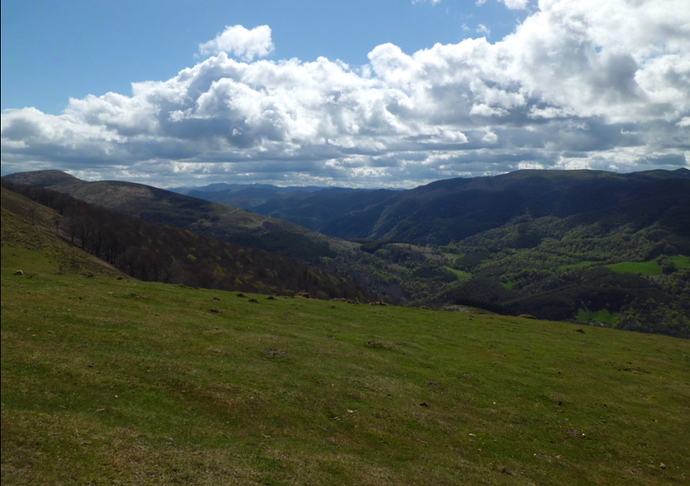 We finally reached the summit and I attached my fishing rod to this metal thing resembling a sword. 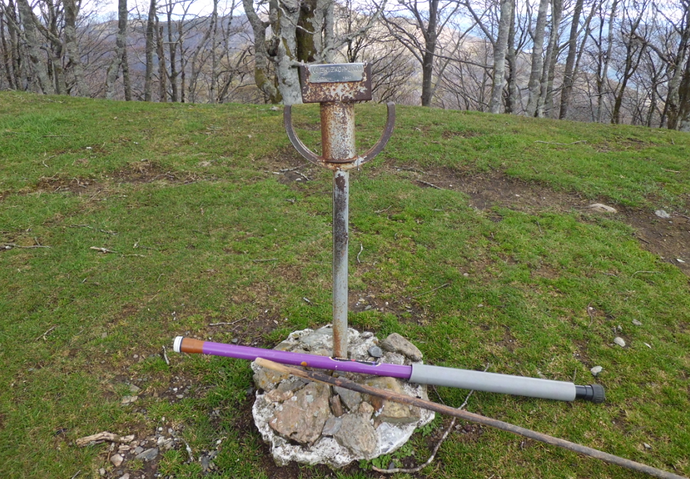 It was windy so I found shelter a bit further downhill by the bleech tree you’ll see in the picture: 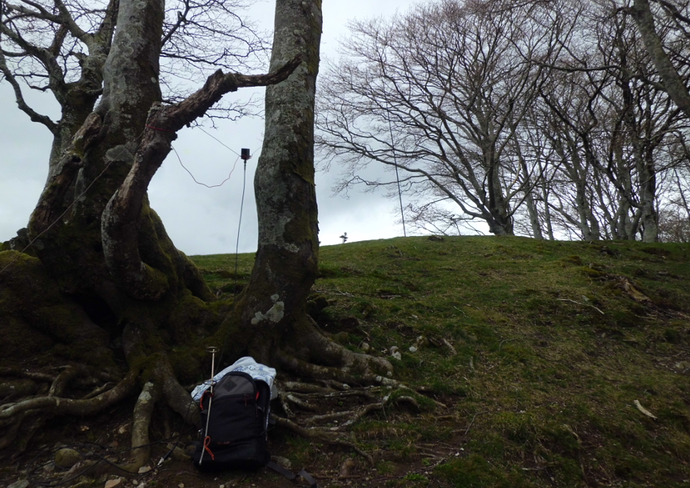 I switched my rig on and it was on 20m, where I found Aage LA1ENA/P starting his SOTA activation with a CQ. I answered and we completed our S2S QSO.
I decided to leave 20m and start CQing on 40m CW. After a selfspot, the pile-up built up quickly and I had a good run of 28 QSOs in 28 minutes. After 40m, I QSYed to 20m CW and I logged 15 QSOs in 10 minutes. When no more chasers were calling in, I decided to go QRT because big clouds had entered into the summit and it had started to rain a little. Apologies to my devoted phone chasers…
This is the full log of this activation: 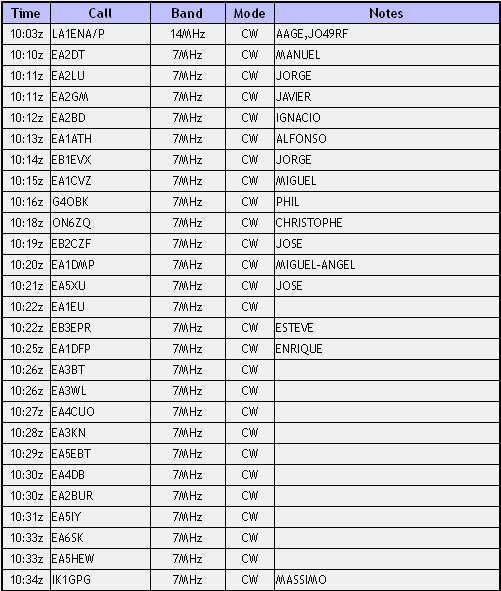 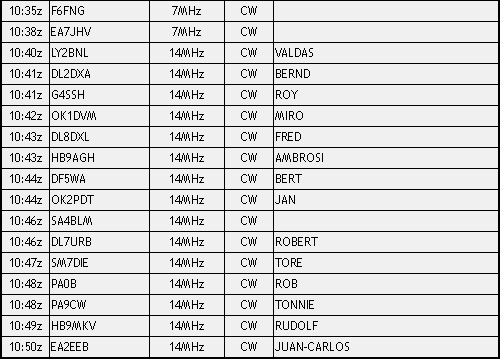 See the clouds coming from the left when I had already started my descent: 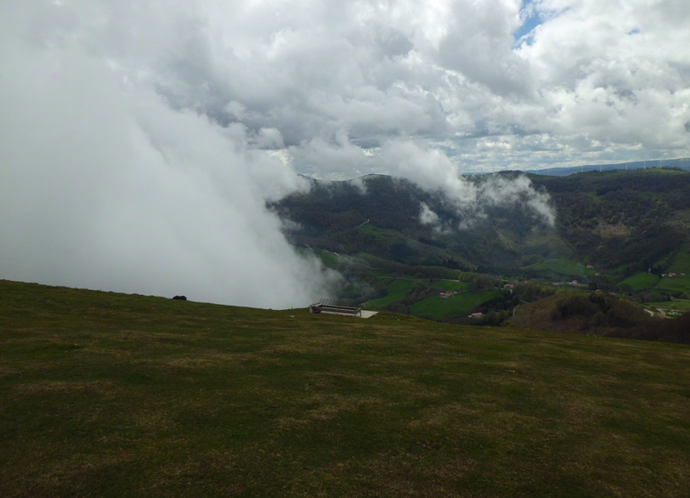 Looking back on my descent I took this picture of the summit I had just activated. 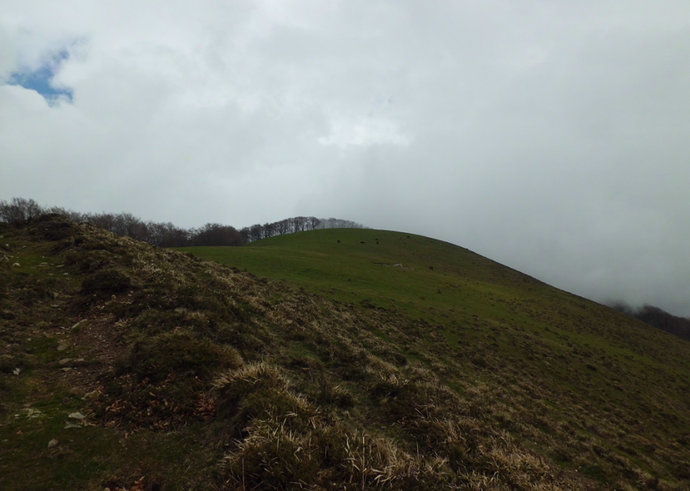 Once in the car I descended to the main road and approached the next mountain.
You can see here the GPS track I followed and I also was lucky because there was a mountain dirt road which I managed to drive up with my AWD car.
I parked the car and started the hike at the point marked by the black arrow in the map: 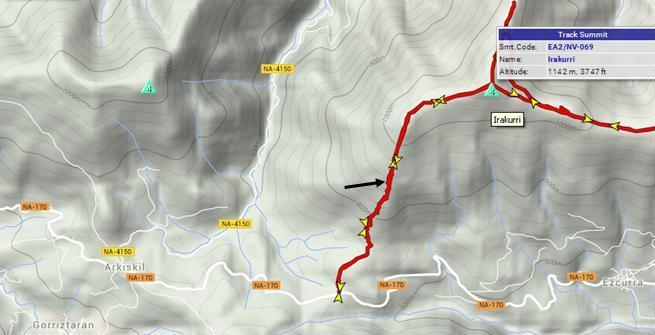 A very steep start again and very beautiful views like this: 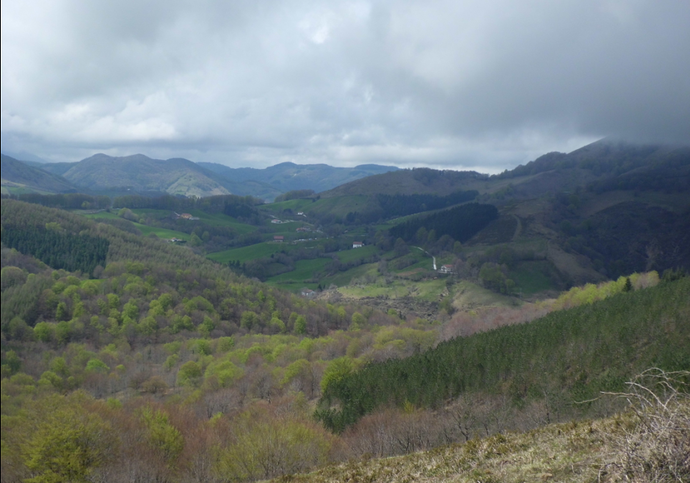 By the time we were about to reach the summit, we were in the cloud. 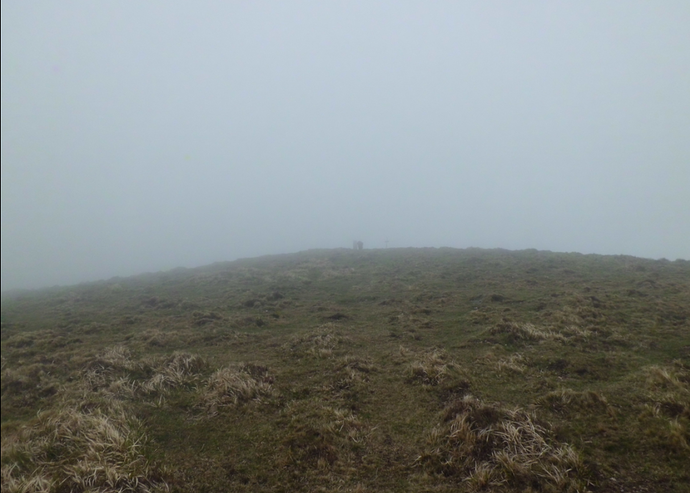 I attached the fishing pole to the concrete trig point cilinder and I descended to the side of the mountain off the wind. 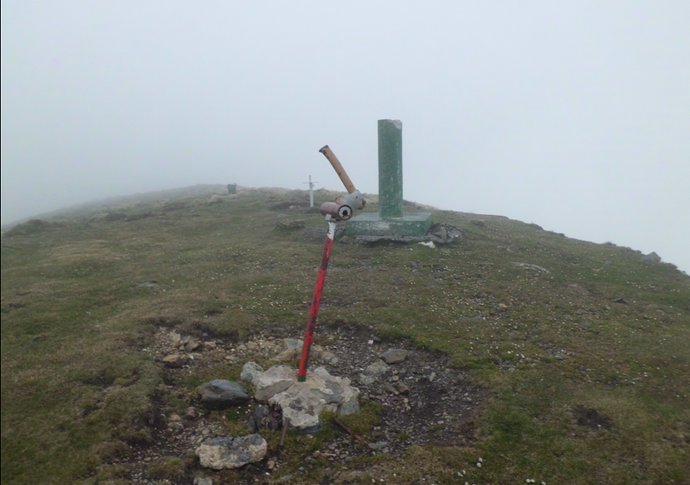 As soon as I switched my rig on, I went to 40m CW and noticed some QRN.
I selfspotted on 7.031 but after realising it was occuppied, I selfspotted again for 7.032.
I worked a few stations and after a few minutes the QRN became so strong that I was almost unable to copy anything. My instinct was telling me that I shouldn’t stay there any longer with so much static and the typical crashes being heard on my receptor, but I didn’t want to QRT with so few QSOs in my log, so I lingered.
So I did until I felt an electric discharge on my right ear coming from static through my earphones, so this was the sign to trigger a sudden QRT.
I immediately disconnected the antenna from the rig and prepared to leave the summit.
This is the short log of this activation. Sorry…

I took this picture of my set-up before packing up. 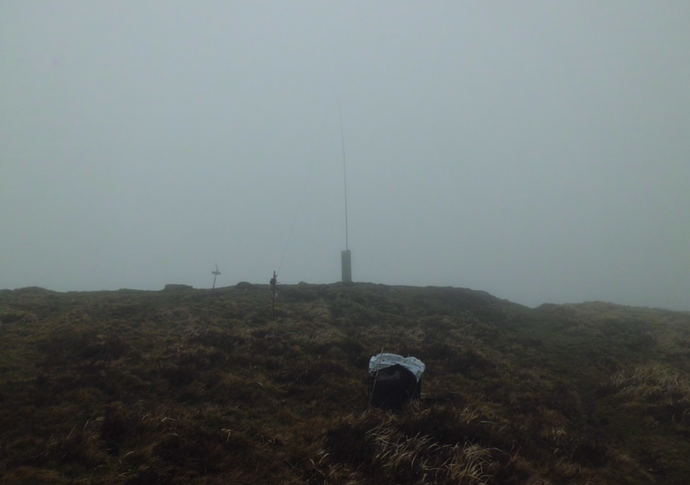 And this one closer showing how I used my wooden walking stick to keep the 9:1 un-un slightly elevated. You can also see the counterpoise wire going to the left of the picture. 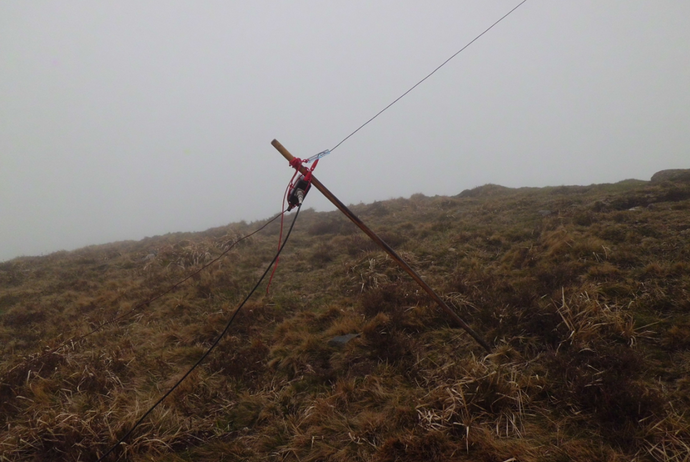 Well, it was a shame that I didn’t have the good weather it was forecasted for my QTH and my wife and kids indeed had all day, but this is the weather in our area, just 75 Km to the North, you get in the middle of a very mountaineous area near the Atlantic Ocean coast and everything can change.
At least, I managed to qualify and make a complete of both summits today, so, at the end of the day, it wasn’t a bad SOTA day for me at all.

Thanks very much for your calls and QSOs. Apologies for making QRT earlier than wished and all my best 73.
Have a nice week.

Hello,
After having published my activation report of Eguzkizko Muñoa EA2/NV-080 last night, I have been contacted today by my dear friend Jorge EA2LU asking me whether it would be possible that his callsing appears in my log.
Once I’ve got back home and checked my paper log, I’ve realised that, for some unknown reason, I forgot typing his callsign when I copied my paper log to the computer.
This is the original paper log proving what I’ve just explained. 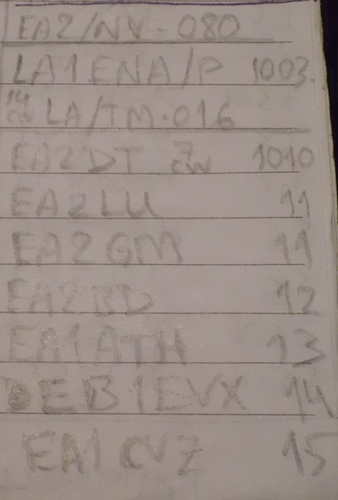 Those photos are wonderful, what nice scenery to walk/climb/breathe heavily in.

Good recovery on the logging error. I have made similar mistakes too and the paper log is very useful.